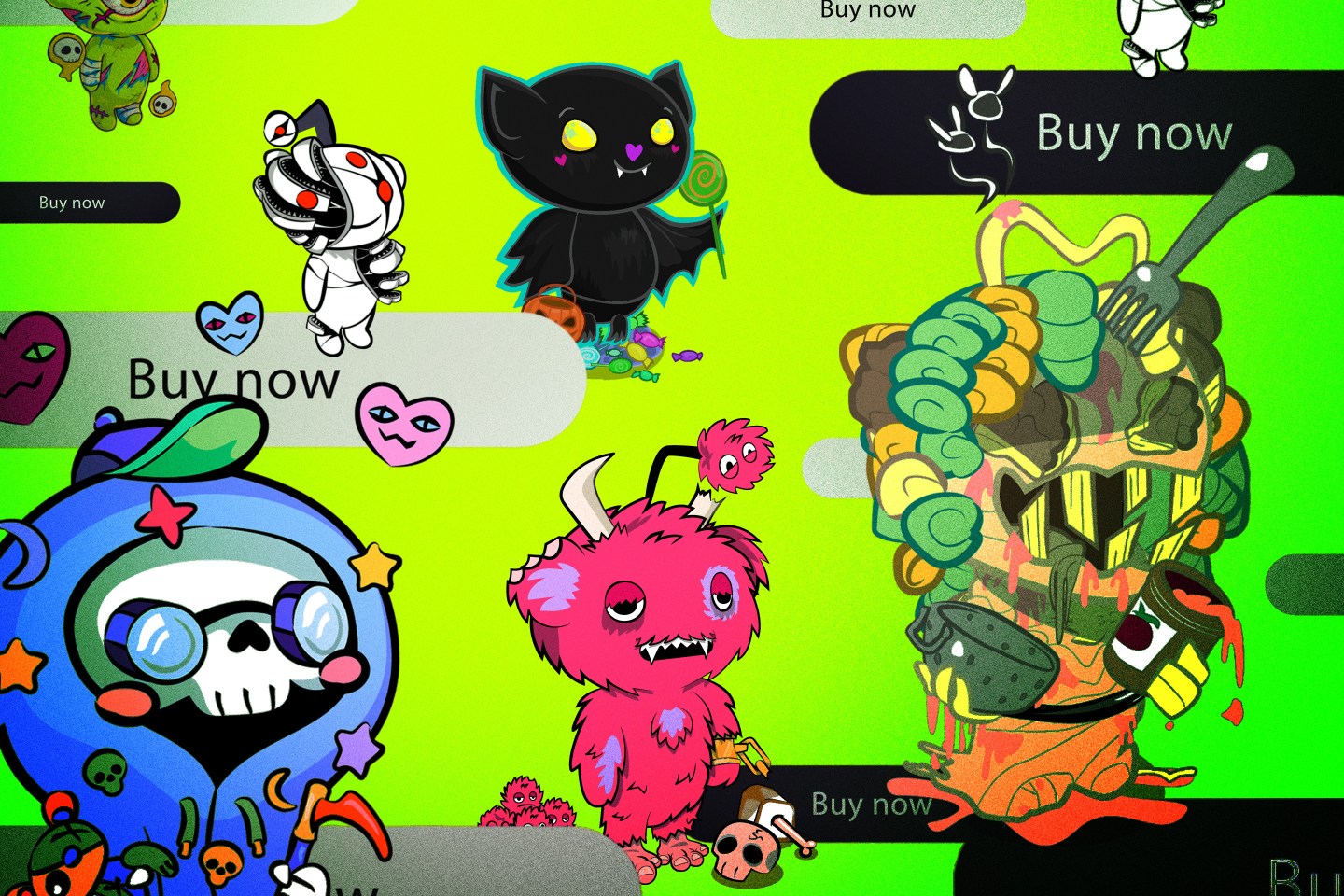 Reddit has upended NFT logic by offering versions of its avatar illustrated by different independent artists.
Illustration by Fortune with images courtesy of Reddit

At 2:59 p.m. ET on Oct. 20, when Reddit announced its second generation of collectible avatars, Ethan was ready, phone in hand.

He wanted to try to buy them on his desktop computer, since the iOS App Store takes a 30% cut. A 38-year-old graphic designer living in northern Virginia who asked to be identified by his first name to avoid doxxing, Ethan didn’t like the idea of the proceeds going to Apple instead of to independent artists. Unfortunately, the Stripe credit card integration on desktop wasn’t working for him, so here he was with his iPhone and PayPal account, ready to snag some NFTs of Reddit’s custom Snoo mascot designed by internet creators like Rojom and Foustling.

As Ethan scrolled and clicked through his favorite collections, his bank called, asking if the purchases were fraudulent. He tried to reassure them as quickly as possible so he could get back to the marketplace. He ended up buying around $300 worth, an amount he figured he could recoup through secondary sales, and that his wife wouldn’t yell at him about—a 38-year-old man paying real money for art of online mascots? Really?

The frenzy around the drop, which Reddit named the Spooky Season Collectible Avatars, recalls a rosier era of crypto, circa January 2022, when NFTs were all the rage and people were splashing out millions of dollars, often outbidding one another, to buy pixelated JPEGs of bespectacled primates.

The Reddit drop defies all logic of Crypto Winter, in which overall NFT trading volumes have collapsed by as much as 99%. By allowing artists to create designs of its signature avatar, mint them on the Ethereum-tied Polygon blockchain, and sell them to users who want them as profile pictures, Reddit has onboarded millions of new wallets into the crypto ecosystem and driven millions of dollars in sales, all while avoiding that dreaded label: non-fungible token.

Ethan encapsulates how the social media platform managed to pull off the unlikely success story. Just a few months ago, he would’ve had the same befuddled reaction as his wife at spending hundreds for illustrated avatars. He’s far from an NFT fanboy. As an artist, he was intrigued by the initial hype, creating an OpenSea account back when NFTs first blew up. Still, he never got too involved.

“I felt the barrier was too high, and it was just such a crap shoot,” he said.

Reddit clearly agreed. The platform has been toying with the idea of allowing users to customize its iconic football-shaped alien logo, Snoo, as their avatar for years—Reddit cofounder Alexis Ohanian told Fortune that he first shipped a prototype avatar builder over 10 years ago. Reddit introduced a basic builder tool eight years ago and an updated version two years ago. While the most recent one was integrated with Reddit’s in-platform currency and premium offerings, it was not tied to blockchain technology, which would allow users to trade and sell them on secondary markets, except for a brief trial of four NFTs in June 2021.

That changed this July, when Reddit announced the launch of “blockchain-backed collectible avatars,” which it described as limited-edition renditions of its Snoo mascot designed by independent artists that users could buy, mixing and matching different elements to create profile pictures. In the nearly 800-word post, Reddit did not use the term “NFT” once.

“NFTs are widely hated,” one Reddit user told Fortune. “Just the name itself has a negative reputation.”

It was a shrewd move to make the technology seem more accessible. “In the future, we see blockchain as one way to bring more empowerment and independence to communities on Reddit,” a spokesperson said. “We are exploring tools to help them be even more self-sustaining and self-governed.”

The announcement post detailed the benefits of blockchain in simple terms. Purchasers would have the rights to use the art on and off Reddit, and the avatars would be stored on the Ethereum-compatible Polygon, meaning purchasers would have “ownership and portability.” In other words, they could sell them on secondary markets like OpenSea.

Reddit also took steps to avoid some of the jargon and difficulty of NFTs. All purchases could be made with fiat currency, and users wouldn’t have to set up crypto wallets. Instead, they would use blockchain-powered wallets built into the Reddit platform—branded “vaults”—that already were integrated into other aspects of the platform, like community points.

Ethan has been a Reddit user for over 11 years, but like most people, he didn’t notice the July announcement. To spur more traction, Reddit began to airdrop the avatars for free to power users in August, which Ethan saw, but he still kept his distance. What caught his attention was the rapid growth of the r/avatartrading subreddit, an unofficial community where users gathered to share tips and make offers for their preferred artwork.

He began to learn about the different artists involved, even joining the r/avatartrading Discord server so that he could chat with them. His favorite was named Rojom, a bestseller on Reddit who makes surreal black-and-white versions of Snoo with a blend of body horror patterns and religious iconography. Rojom’s avatars initially went for under $100 when listed on Reddit’s shop, although they’re now selling for thousands on OpenSea.

‘You didn’t really have to know anything’

Ethan liked that he could use different elements from different avatars to make his own. He eyed one by an artist called Le Rock with a guitar that he could use in his profile picture—he plays guitar himself. Best of all, the transaction costs, or gas fees, were low, a barrier that initially turned Ethan off from NFTs. He learned how to collect his free avatars and even bought a couple from the first generation that launched in July, which were still available.

“That’s the thing that I really loved about what Reddit did—the barrier of entry was minimal,” Ethan said. “You didn’t really have to know anything about blockchain or seed phrases or wallets.”

Others took notice: By Oct. 3, the first generation of avatars sold out. Sales volume also was increasing: According to data from Polygon Analytics, total sales passed $1 million on Oct. 3, after hovering around just $40,000 a month before.

The collectible avatar initiative, once slow to take off, was proving a success. “Remember when Reddit Avatars were considered a huge fail and everyone was making fun of them?” wrote one user on a different subreddit, r/cryptocurrency. “Yeah, that aged like milk in an incubator.”

Meanwhile, the r/avatartrading subreddit was flourishing. One of the moderators, who asked to be identified as “Matt” due to the value of his holdings, joined in August because he wanted to figure out how to get his free airdrop. There were only a handful of members. By early October, there were more than 3,500.

According to Matt, the community started because fanfare was growing around some of the early avatar collections, like one called Drip Squad. User numbers were still small enough to where r/avatartrading members could scoop up other collections in hope that they would skyrocket. The bet paid off as the market took off, with some people buying avatars just to flip them immediately.

Everything exploded with the launch of the second-generation avatars on Oct. 20, with many of the most popular collections selling out in minutes. Sales volume exploded, with the total racing past $10 million on Halloween.

The question is whether the hype cycle can last.

Michael Anderson, cofounder of the crypto-focused venture firm Framework, said NFTs need to offer value beyond pure speculation. “You have to have core utility built into these NFTs for them to have sustainable value over the long run,” he said.

One example is rarity, which can serve as a kind of status symbol, like the Bored Ape avatars, owned by celebrities from Mark Cuban to Paris Hilton. While some of the Reddit avatar collections have fewer mintings, it’s not a core feature of the project, which has almost 3 million avatars in circulation.

Another use case could be offering some kind of community value, such as access to different spaces within Reddit, which Anderson described as token-gating. It’s also possible Reddit’s avatars will push new users to interact with other aspects of the crypto ecosystem, where NFTs are still a punchline.

At a panel at TechCrunch Disrupt on Oct. 18, Reddit chief product officer Pali Bhat revealed that over 3 million Redditors had created a wallet, or Vault, and that 2.5 million Vaults had been used to purchase an avatar—a figure that’s increased to nearly 3 million, according to Polygon’s data.

In data provided exclusively to Fortune, OpenSea said it has seen a 75% increase in new users on Polygon since Reddit’s Oct. 20 drop, with Reddit bringing in nearly three times more new users than any other project in the last six months. Moreover, 20% of Reddit NFT owners who made a transaction on OpenSea have gone on to purchase another NFT on the platform.

“It’s good, obviously, bringing new people into the space by whatever means necessary,” said Framework cofounder Vance Spencer. “But how do you get the people who came in for a Starbucks gift card or a Reddit NFT to go off and actually use DeFi?”

‘Just hung them out to dry’

Matt, the moderator for r/avatartrading, is skeptical that Reddit NFT users will expand beyond the platform, especially given the bleak crypto landscape outside of the social media platform.

“I don’t see a lot of talk in our chat and everything about people wanting to venture outside,” he said. “Why would they?”

The major obstacle now is that Reddit is attracting millions of people who would otherwise never interact with crypto—a dynamic that is reinforced by the fact that Reddit avoids any crypto branding, including warnings about the scams and hacks endemic to the industry.

Matt said that users of r/avatartrading were targeted by a scammer who tricked them into giving up their recovery phrases, allowing the scammer to drain their NFTs. He said that one user lost thousands of dollars’ worth of avatars.

The moderators have taken steps to educate users and invite guests who can give tutorials on safety and security, often pulling all-nighters to offer support. Matt said Reddit has been radio silent after it “just onboarded so many new Web3 users and so many NFT users, and they just hung them out to dry.”

A Reddit spokesperson said that r/avatartrading is an unofficial community, instead pointing to r/collectibleavatars as the official Reddit-run community where the platform posts news and updates.

Despite its unsanctioned status, on Oct. 25, r/avatartrading passed 10,000 members. Ethan, the graphic designer from Virginia, could only watch in amazement.

“The last time I personally saw overnight growth like that,” he said, “was r/WallStreetBets with the GameStop stuff.”