Inside J.P. Morgan and Techstars’ joint push to get VC dollars to diverse founders 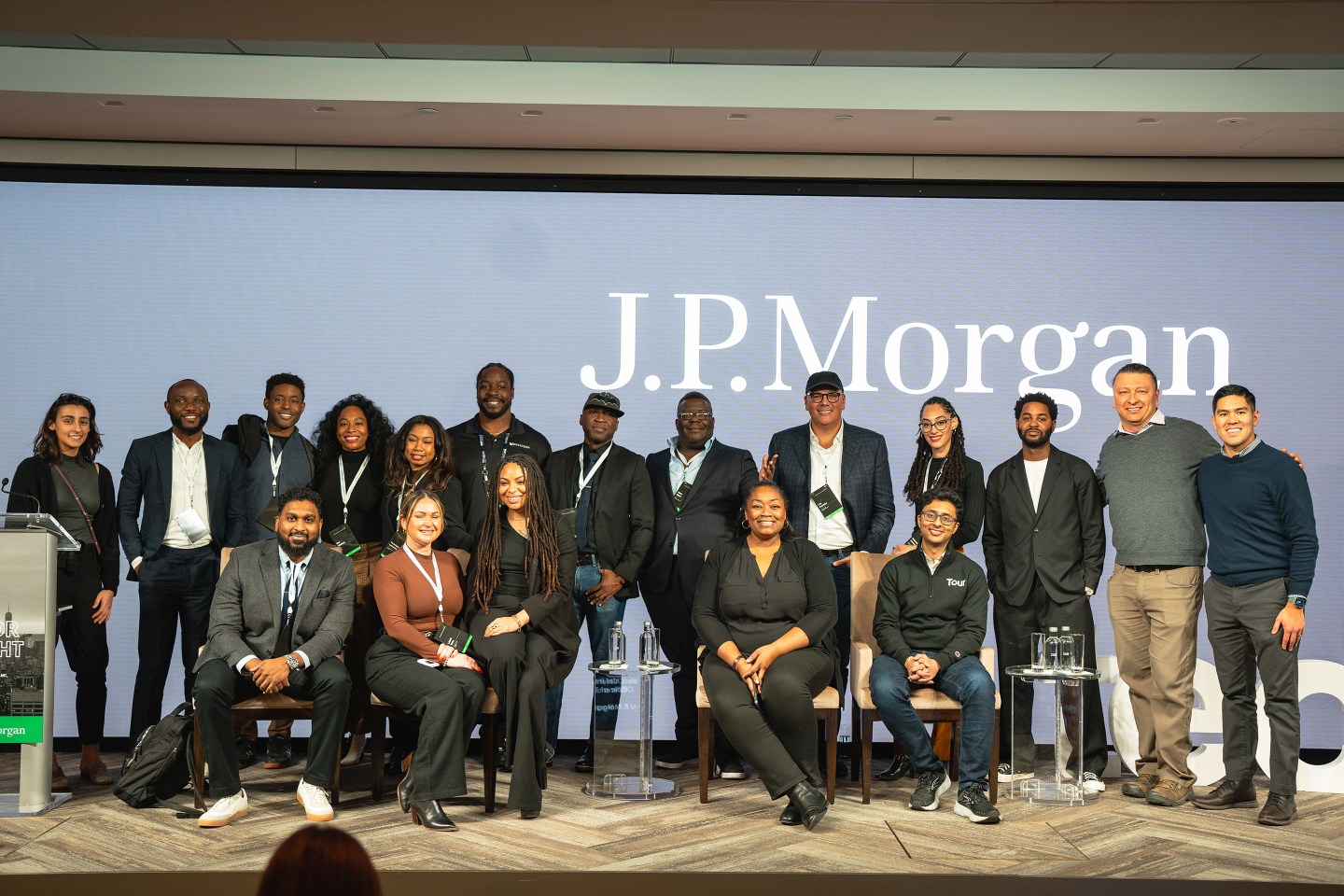 Ben Camara was nervous but excited. It’s not often that a founder raising their seed round gets to pitch in front of a room full of potential investors at J.P. Morgan’s offices in New York City.

“As soon as I got to the stairs to go up onto the stage, I was actually okay,” Camara, the CEO and founder of Remote Coach, a digital platform designed to help content creators build apps and monetize their businesses, later told me. Camara was the first of five founders pitching his startup onstage on Tuesday morning in front of a host of venture investors and fellow founders in the conference room on Madison Avenue. ​​The startups ranged from Gildform, an on-demand jewelry manufacturing business using 3D printing, to Talisman, a platform that automates IT functions.

The group was gathered for a New York investor day highlighting startups that received funding from an $80 million fund raised by pre-seed investor Techstars through J.P. Morgan’s private bank platform from clients of the bank. Launched last year, the fund aims to invest in racially and ethnically diverse and underserved founders. The feeling from the event was that VCs looking to beat the returns of their peers can’t afford to not be investing in these founders from diverse backgrounds—those that aren’t part of the crowd of white Stanford grads who can tap their college buddies or family friends for startup money.

But the industry data tells a different story: Only around 1% of venture funding in U.S. startups went to Black founders last year—an abysmal, pitifully small amount. That percentage is similarly bleak for Latinx founders.

The Techstars fund (with J.P. Morgan), at $80 million, is a drop in the bucket to boost those numbers. But the fund, dubbed the Techstars Advancing Cities Fund, plans to invest in over 400 companies (focused on entrepreneurs who are Black, Hispanic, Latino, Indigenous American, and Pacific Islander) in cities like Atlanta, Chicago, Detroit, Miami, and Washington, D.C., through 37 Techstars programs through 2024. A group of nearly 60 founders—the first cohort who received checks from the fund and finished accelerator programs—gathered in J.P. Morgan’s sprawling office to meet with and pitch over 100 investors, from seed-stage firms to even growth investors, the organizers told me.

As Chiko Chingaya, the CEO of Talisman, described it, pitching onstage at the investor day was like a “coming out party,” adding that he feels his startup has some momentum.

The overarching message hit on an interesting point: “VC is known for doing pattern recognition. But if you want to achieve outsized returns, you have to do something somewhat different,” Sherman Williams, cofounder and managing partner of AIN Ventures, and a VC-in-residence at Techstars, said during an onstage panel on Tuesday.

The fund was raised from LPs “who expect to be seeing strong returns,” but also “want to see generational wealth being created among founders…who are usually overlooked,” Maëlle Gavet, the CEO of Techstars, told me on the sidelines of the event. About $7 million of the $80 million fund has been deployed so far, Gavet and Leyonna Barba, a managing director of technology and disruptive commerce at J.P. Morgan Commercial Banking, told me. (Each founder gets a typical Techstars check: up to $120,000 for the right to a 6% equity stake—which breaks down to $20,000 for 6% and a $100,000 convertible note offer.)

For those like Camara, who went through the Techstars accelerator program in Atlanta last year, it’s helped open doors—literally, to meet with potential investors through J.P. Morgan and Techstars’ networks. “You feel as a founder that you’re working 18 hours a day and there is an opportunity,” he said of funds like these, “rather than, you’re working 18 hours a day and you just see these data points on LinkedIn that are saying that [a tiny percentage of funding] is going to Black and brown founders.”

The fund’s ambitions aren’t unique—you may remember similar commitments over recent years to fund Black and diverse founders, like Google’s Black Founders Fund, launched in 2020, or Goldman Sachs’s One Million Black Women funding commitment. And in general, I look at these diversity-focused programs with one eyebrow raised; after all, dozens of companies made sweeping commitments of one form or another in recent years, propelled by the murder of George Floyd in 2020, yet that percentage of dollars funding Black and diverse founder-owned businesses has hardly budged. And though there appeared to be a lot of non-white audience members in J.P. Morgan’s conference room on Tuesday morning, the audience was still largely male (at least during the portion of the event I attended). Meanwhile the leadership at the massive bank—namely, its board of directors—is still predominantly white and male. (The bank recently announced Alto Pharmacy CEO Alicia Boler Davis will join the board in March.)

What surprised me is that the fund, which is and will be accepting applications, is open to all founders—not just those from underrepresented backgrounds. Gavet told me it was an intentional decision in order to give Black and brown founders “the same access to the network” of founder and VC circles (which are often white and male-dominated) “and to make sure that the peer group that they operate in has also some diversity on all fronts,” says Gavet. She compares it to female founder-focused funds: Instead, “We want female founders to have the same network…as their male peers.”

However, of the money they’ve invested so far, roughly 70% has gone to Black and brown founders. And they’re aware of the challenges, including the fund’s size, in moving the needle. “It’s definitely not enough, and we’re starting so far behind, relative,” Barba said. But, “We’re trying to show that investing in diversity is not philanthropic…It’s real returns, it’s real profit.”

On Tuesday, that was very explicit: VCs, get out your checkbooks. As for founders like Camara, he says he had a couple of potential-check-worthy conversations.

Shein’s big discount: Chinese fast fashion retailer Shein may soon have a less shiny valuation—and boy, it would be a down round. Per the Financial Times, the retailer is in talks to raise up to $3 billion at what would be a big haircut in valuation: around $64 billion, per the report, down from its last valuation of roughly $100 billion. The online retail powerhouse is backed by big firms like General Atlantic and Sequoia.

See you next week,

- iLife Technologies, a Los Angeles-based operating system for insurance carriers and agencies, raised $17 million in funding. Foundation Capital, Brewer Lane Ventures, and SCOR Ventures co-led the round and were joined by GTMFund and OpenView Partners.

- Oro, a Los Angeles-based B2B e-commerce platform, raised $13 million in funding. Zubr Capital led the round and was joined by Highland Europe.

- Cumul.io, a Brooklyn and Leuven, Belgium-based analytics platform for SaaS companies, raised €10 million ($10.83 million) in Series A funding. Hi Inov-Dentressangle led the round and was joined by Axeleo Capital, LRM, and SmartFin.

- Akia, a San Francisco-based customer experience automation platform, raised $6 million in Series A funding. Altos Ventures led the round and was joined by GSR Ventures.

- Cypris, a New York-based research platform for research and development teams, raised $4 million in Series A funding. York IE led the round and was joined by Activate VP, K20 Fund, and BlueTree Capital.

- SLAY, a Berlin-based social media network for teenagers, raised €2.5 million ($2.7 million) in pre-seed funding. Accel led the round and was joined by 20VC and other angels.

- SphereOne, an Austin-based crypto payment platform, raised $2.5 million in seed funding. Distributed Global led the round and was joined by Newark Venture Partners, Zero Knowledge, and other angels.

- APRINOIA Therapeutics, a Cambridge, Mass.-based neurodegenerative disease biotech, agreed to go public via a merger with Ross Acquisition Corp II, a SPAC. A deal values the company at $280 million.

- B Capital, a New York-based investment firm, raised approximately $2.1 billion for a fund focused on investments in U.S. and Asia-based companies.

- Evolution Equity Partners, a New York-based investment firm, hired Taher Elgamal as a general partner. Formerly, he was with Salesforce.