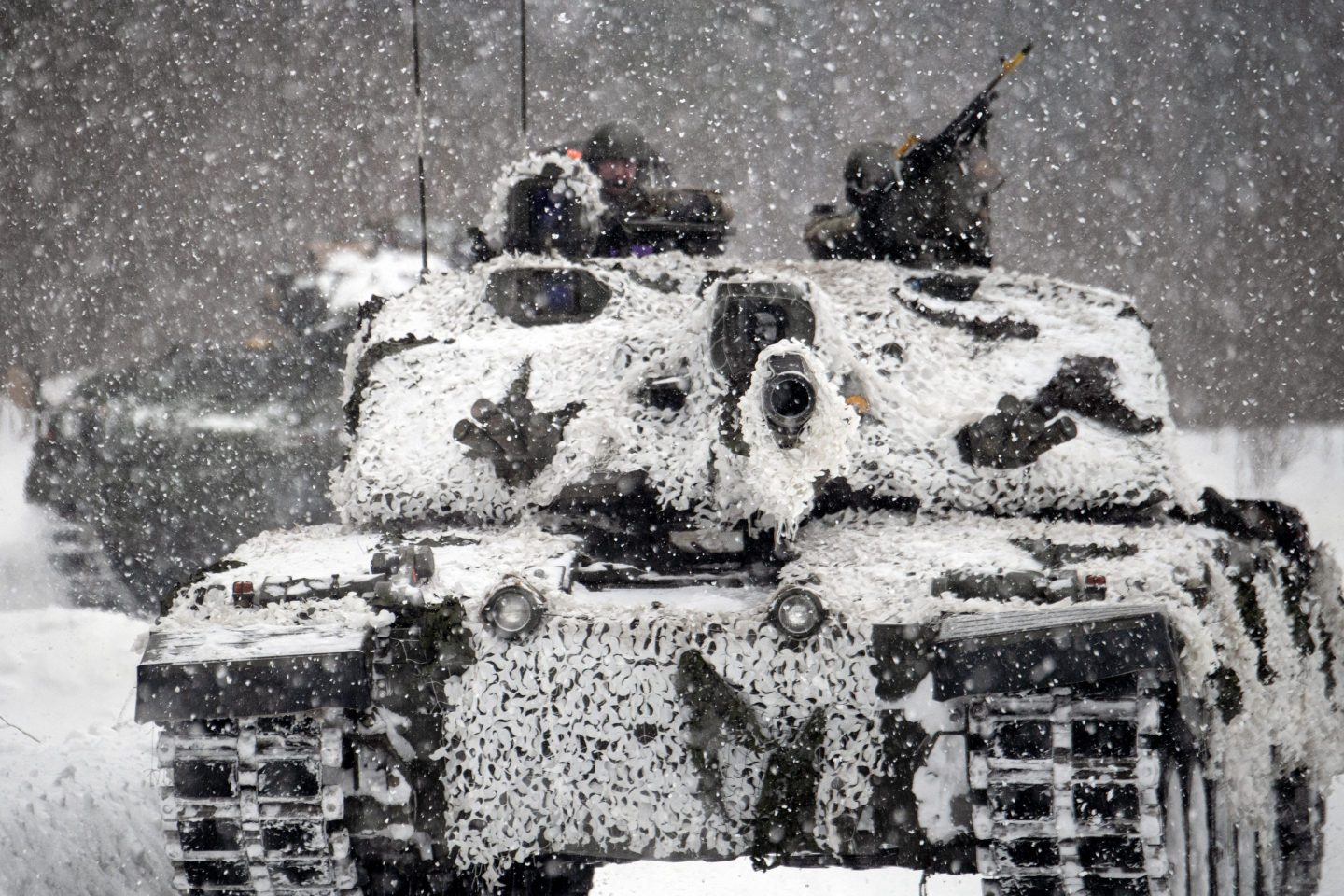 A British Challenger tank is engaged in a NATO drill in Estonia on Feb. 5. The U.K. government is now considering plans to supply Ukraine with the advanced battle tanks.
Alain Jocard—AFP/Getty Images

The White House is proudly trumpeting the lowest unemployment rate in 50 years and falling commodity prices–but they have more to be proud of on the economic front.

The days of Vladimir Putin’s energy blackmail driving up energy prices and testing Western unity are quickly coming to a close amidst a string of underappreciated but significant energy victories for the Biden Administration, ranging from bringing down gasoline prices for drivers to supplying enough LNG to keep Europe warm this winter. Instead of shivering in distress, European leaders are now considering plans to supply Ukraine with advanced battle tanks.

Some energy analysts forecasted $400 oil with the implementation of the price cap when in reality oil fell to $70 in the first days after the Dec. 5 rollout. Others insisted that European gas storage tanks are empty when they are in fact 91% full or declared Putin an “energy genius” who “knows exactly what he is doing”.

Putin’s leverage has been so reduced that when Russia banned oil exports to countries that accept the price cap, oil prices actually went down in response that day and that week thanks to ample global supply, including from the U.S. and newly reopened Venezuela, falling to lower than pre-war levels. Putin is now apparently struggling to sell oil priced at even $38 a barrel, 50% below market prices.

Some of these same observers are rushing to declare Putin’s energy hijinks dead, conveniently ignoring their previous prognostications–much as how everyone saw the crypto collapse this year but not last year.

We feel vindicated because we have been giving the Biden Administration plaudits for their balanced, pragmatic approach to Putin’s gambits since the start of the invasion. Despite the highly politicized environment around energy issues, with raging partisans pulling towards extreme platitudes and lobbing strawman attacks, the Biden Administration has charted a pragmatic, centrist, effective path towards stabilizing global energy markets amidst Putin’s tantrums by letting the Russian leader destroy his own energy leverage through his miscalculations.

Not only has Biden rebuilt trust through collective action by fostering a united Western coalition in support of Ukraine, but he has also maintained that unity through savvy energy diplomacy in the face of Putin’s divide-and-conquer tactics.

After Putin choked off natural gas supplies to Europe, hoping Europeans would “freeze to death” and “turn on their elites,” the Biden Administration immediately committed to delivering an extra 15 billion cubic meters of U.S. LNG to make up for the shortfall. The U.S. ended up delivering nearly 40 billion cubic meters of gas to Europe (almost three times the previous record) and is en route to becoming the world’s largest LNG exporter. Europe is fully weaning itself off Russian energy, reducing its dependence on Russia from 46% to a minuscule 8%, with gas prices falling to lower than pre-war levels.

Even more importantly, moving forward, Europe’s storage tanks remain at a record-high 91%, nearly 50% better than last year, so even if an inevitable cold spell hits, Europe will still need to buy significantly less gas in 2023 than in 2022. With global LNG supplies growing rapidly, Europe already purchasing more LNG now than it ever purchased Russian gas, and China pivoting away from LNG, Europe is now totally weaned off any dependence on Russian gas, as we correctly predicted in October.

Some market analysts are even calling an LNG oversupply next year, an assessment the gas futures market apparently agrees with, with the entire forward curve reflecting lower prices than pre-war for years to come.

Of course, alarmist, conflicted analysts are still desperate to pump up falling prices–with elevated $100+ price targets even though many large oil companies are increasing their oil price downside exposure hedges.

Balancing realism and idealism: the transition to clean energies

Putin’s trite attacks on the “excessive enthusiasm over renewable energy sources” for “creating an acute energy crisis” with a shortage of supply are meant to exploit the seeming contradiction between the energy transition and fossil fuels. But rather than being torn by the contradictions that Putin habitually seeks to exploit, Biden has sought to resolve them by adopting an “all of the above” energy strategy.

Under Biden, the U.S. has grown to become the world’s largest oil and gas producer with record oil production of 12 million barrels per day and 950 bcm in gas production, with even more growth to come, fueled by 3,557 permits for oil and gas drilling on public lands (even outpacing the Trump Administration).

Throughout this year’s challenges, Biden has repeatedly engaged the energy industry despite flak from both his left flank as well as the ideological right–and despite hostility from some industry players.

Biden has encouraged oil companies to increase production, which they are now heeding, and he proactively enlisted the assistance of the private sector in enforcing the Russian price cap and exporting LNG.

As the CEO of Cheniere declared on CNBC, “As the White House and the Administration have recognized that energy security for our allies is extremely important, they know we have a role to play in that and the regulatory landscape has gotten better. We feel a big shift.”

Biden has remained constant in reaching out to industry even amidst hostility. For example, gasoline prices are down to below $3 in many parts of the United States after Biden publicly nudged refiners to cut their excess margins. These refiners may not have appreciated the call-out, but coincidentally or not, margins have already compressed considerably, putting more money in the pockets of American drivers.

Unlike unilateralist predecessors, Biden has struck a fine balance between prioritizing U.S. energy security and self-sufficiency without sinking into retaliatory protectionism or a self-defeating parochial resistance to global innovation.

Throughout last year’s energy tribulations, Biden has made clear that bringing down prices for U.S. consumers remains paramount. However, U.S. energy leadership does not have to be a zero-sum game. Biden wisely refused to implement an export ban on refined products despite loud calls from members of his own party.

Perhaps the Administration could be more vocal in claiming credit and trumpeting these triumphs, but the results speak for themselves with Putin running out of cards to play and Russia losing economic relevance.