China’s record COVID outbreak is dragging down its economy. But an earlier-than-expected peak could leave some room for optimism 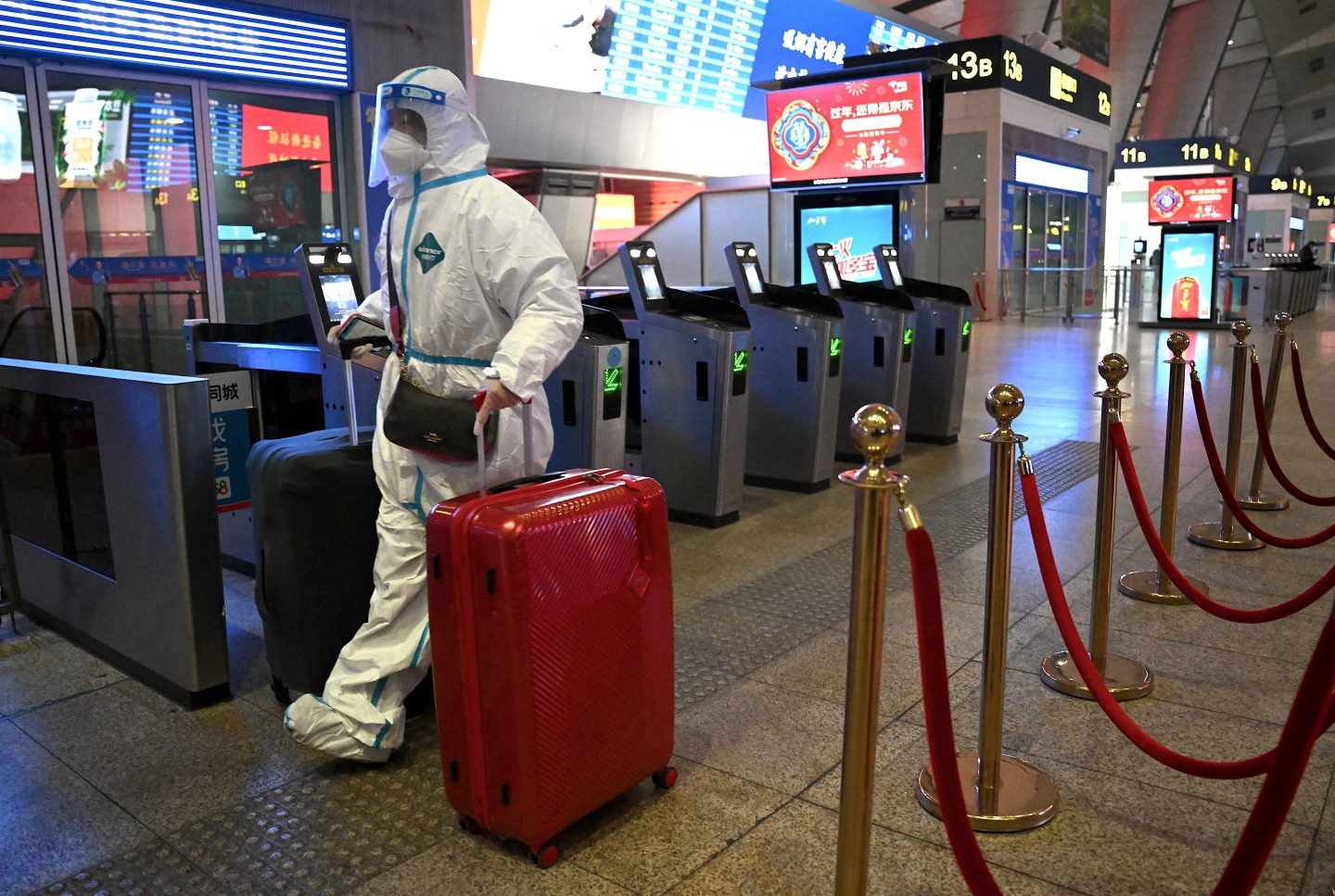 China will stop requiring quarantine for international arrivals this Sunday, ending one of the last remaining, and most visible, elements of its abandoned COVID-zero policy.
Noel Celis—AFP/Getty Images

This Sunday, China will stop requiring international arrivals to go into quarantine, ending one of the last remaining—and most visible—elements of Beijing’s “COVID-zero” approach to the pandemic.

Chinese authorities are sticking to a rapid reopening despite a massive surge in COVID cases, likely numbering into the tens, if not hundreds, of millions. Chinese households are snapping up cold, flu and now diarrhea medicine in a bid to protect themselves, leading to shortages at drug stores.

No one knows the true extent of the country’s COVID outbreak. “It is only after the wave when we can calculate the case fatality rate and death rate more accurately,” the head of the National Health Commission’s COVID response team told reporters last week.

One model from Airfinity, a U.K.-based research firm, puts daily infections at 2.5 million and daily deaths at 16,600. In late December, one health official estimated that the country saw as many as 37 million infections in one day, and that 250 million were infected in the first 20 days of December alone.

Foreign governments are worried that an uncontrolled outbreak could lead to a new immune-evasive COVID variant. The World Health Organization this week said that it wasn’t seeing any new strains in Chinese data—yet also said that the official data was minimizing hospitalizations and deaths.

Yet some data suggest that China’s COVID surge could be peaking in major cities. Subway attendance in major Chinese cities are up from lows in December, implying that people are feeling well enough—or safe enough—to go back to work.

An earlier-than-expected COVID peak could mean less disruption to supply chains caused by sick workers. (Chinese officials have also encouraged people to return to the office, even if they have mild symptoms).

“I believe the overall supply chain should be stabilized by next March or April” due to Beijing’s fast reopening, Nio CEO William Li told Bloomberg earlier this week.

Now Beijing has to turn its attention to the economy, battered not just by COVID, but also by the government’s crackdown on private companies. Both manufacturing and services activity shrank in December as China’s COVID cases skyrocketed, according to official Chinese data. Services, in fact, shrunk at their fastest rate since February 2020, the very beginning of the COVID pandemic.

China’s policymakers promised to focus on growth and domestic demand in a mid-December meeting, and the People’s Bank of China said Wednesday it would use “forceful” monetary policy to support the economy.

Investors are optimistic that China’s economy has turned a corner. Hong Kong’s Hang Seng Index is up 6.1% since trading began this year, the strongest start since 1999. The NASDAQ Golden Dragon China Index, which tracks Chinese companies traded in the U.S., is doing even better, up 10.3% so far this year.

OpenAI, the developer of generative AI program ChatGPT, is in talks with investors that could value the startup at $29 billion. ChatGPT has taken the internet by storm since it was released last year, with its users learning how far artificial intelligence has come in generating usable content. And tech companies are taking notice: Microsoft is reportedly considering working with OpenAI to improve its Bing search engine, while Google is treating ChatGPT as a "code red" for its continued dominance in online search. The Wall Street Journal

China could ease its rules on borrowing from property developers as Beijing tries to revive a flagging real-estate sector. In 2020, Beijing imposed its "three red lines": thresholds that developers needed to reach in order to borrow more money. Those new rules sent the property sector into a crisis, with huge developers like China Evergrande Group defaulting on their international debt. Home prices have plunged, dragging down a major source of Chinese household wealth. Bloomberg

Samsung Electronics said on Thursday evening that it expects its quarterly profits to fall by 69% to its lowest level in eight years. The Korean company, the world's largest producer of memory chips, is facing a slump in the chip market as consumers stop buying smartphones, computers and other consumer electronic devices. The South Korean government is worried about the country's place in the semiconductor supply chain, with the government's lead on chips—who helped lead Samsung to memory chip dominance—warning that Korean chip manufacturing could move to the U.S. Reuters

Meet the biology professor who named the surging ‘Kraken’ COVID variant. He has more to help make sense of Omicron’s ‘alphabet soup’ by Erin Prater

‘Rage-applying’ is the new ‘quiet quitting,’ and it’s helping Gen Z and millennials land $30,000 raises by Jane Thier

JPMorgan’s chief U.S. economist warns of job losses and higher unemployment ahead: ‘We are expecting the economy to slip into a recession’ by Christiaan Hetzner

This edition of CEO Daily was edited by Nicholas Gordon.