Is anti-Semitism education part of your DEI program? It should be 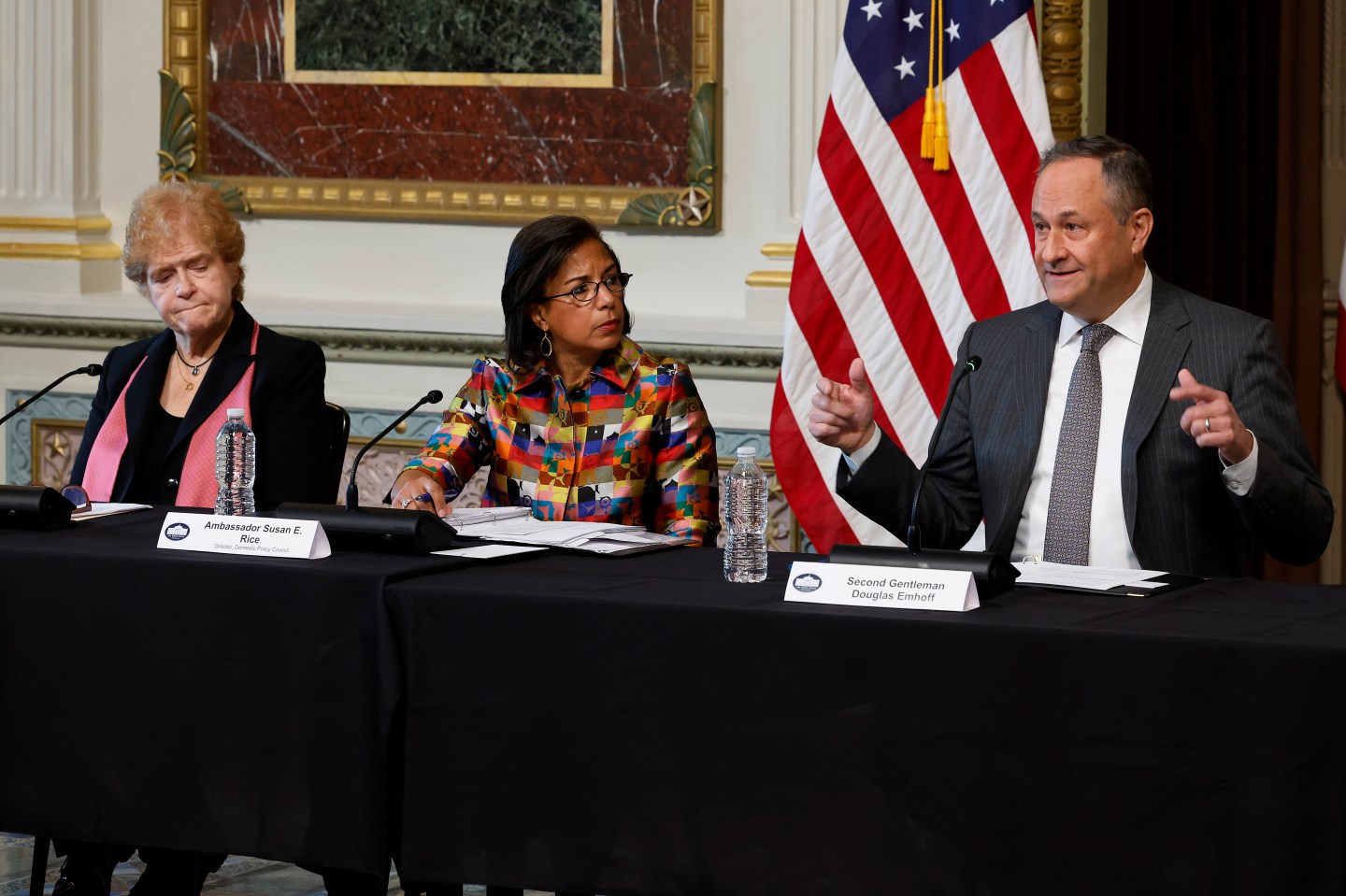 Second Gentleman Doug Emhoff address Jewish leaders and members of the Biden administration at a roundtable event on the growing threat of anti-Semitism in the United States.
Chip Somodevilla/Getty Images

I recently asked for your input on how you were handling the current and unconscionable rise in anti-Semitism. I was both buoyed and disturbed by the flood of responses I got on social feeds and by email: Many of you are terrified for your families, communities, and the world.

You’re not wrong to be afraid.

This week, Second Gentleman Doug Emhoff held a roundtable discussion on the issue with key Biden administration leaders and about a dozen representatives from the Jewish community, including representatives from the Anti-Defamation League, Hillel, and Orthodox Union. “Let me be clear, words matter,” he said in his opening remarks. “People are no longer saying the quiet parts out loud. They are literally screaming them.”

Ambassador Deborah Lipstadt, Biden’s special envoy who monitors anti-Semitism around the world—I covered her appointment here—told the roundtable that people have not taken anti-Semitism seriously enough.

“For too long, Jew-hatred has been belittled or discounted because Jews have erroneously been considered white and privileged. This is a very real threat to Jews, and that alone would make it worth fighting with all our soul and with all our might,” Lipstadt said.

But also in my inbox was a note from Julie Brandt, the executive director of the Cornerstone OnDemand Foundation, the nonprofit arm of talent management software and online learning firm Cornerstone OnDemand (CSOD). In a time of rising hate and wariness of public institutions, she says leaders must leverage the trust people feel for their employers to set the stage for deeper understanding. “That’s why it is critical to help corporate leaders and DEI executives incorporate the Jewish lived experience and antisemitism education into DEI programming,” she noted.

To do this, CSOD partnered with Project Shema, a unique nonprofit that helps the Jewish community and allies navigate these complex conversations, to create a pilot project aiming to help companies expand their DEI work to include anti-Semitism.

To get us all moving in the right direction, Brandt shared this short video, “Talking About Antisemitism,” which is a part of CSOD’s A Seat at the Table conversation series. It features an unscripted conversation with real employees about Jewish identity. It opened my eyes to the common microaggressions Jewish workers experience daily and the straightforward questions many people have about faith, culture, Israel, and geopolitics. Answering these questions would be a good start.

It’s well worth your time.

But Oren Jacobson, the cofounder and executive director of Project Shema, cautions that it’s important to understand that the conversation depicted in the video—or any single discussion or event—is just a starting point and must be part of a broader effort to educate about the Jewish experience and anti-Semitism. “This video is really an entry point to help corporations create space for education about the Jewish experience and the violent bigotry that has targeted Jews for millennia,” he says in an email. “People must understand that antisemitism threatens all of us as anti-Jewish hate is deeply intertwined with other forms of hate.”

Project Shema shared this simple guide for those of you looking for guidance on how to include anti-Semitism in your DEI practice and how to be better allies to your Jewish employees.

We’re grateful to both Julie Brandt and Oren Jacobson for reaching out.

As always, we’d love to hear from practitioners, ERG members, and leaders about what you’ve learned while bringing anti-Semitism initiatives to the workplace. Best practices, wish lists, and ideas are always welcome.

Wishing you a peaceful weekend.

On a personal note, today, we say goodbye to newsletter editor Ashley Sylla, who is moving to a new and exciting role within Fortune. While I, and by extension, you, will continue to have access to her brilliant editorial mind, it will no longer be on a day-to-day, line-by-line basis. Ashley is an enormously talented editor with a broad perspective and bold vision who made every column better. She saved me from myself more times than I can say. I’m enormously grateful for our work together and am excited to cheer her on.

WNBA star Brittney Griner is home. Griner is back on U.S. soil after being released from a Russian jail in a prisoner swap for convicted arms dealer Viktor Bout. The arrangement was concluded after 48 hours of “painstaking and intense negotiations,” said President Biden. Griner’s family thanked the administration in a statement, which acknowledged Paul Whelan, another American who remains detained in Russia. “We sincerely thank you all for the kind words, thoughts and prayers – including Paul and the Whelan family who have been generous with their support for Brittney and our family during what we know is a heartbreaking time,” the statement said. “We pray for Paul and for the swift and safe return of all wrongfully-detained Americans.” In addition to raising awareness of Russian detainees, Griner’s situation also raised important questions about why the seven-time WNBA All-Star center was supplementing her income by playing basketball in Russia in the first place: money.
NPR

Fatal police shootings increase in the US, and yet, insufficient data is collected to understand the scope of the problem. The Washington Post’s Fatal Force database is an attempt to remedy that by tracking fatal police shootings; their findings have been at odds with federal databases since 2015: “The incomplete data also obscures a racial discrepancy among those killed by police that is larger than the federal data suggests. Black people are fatally shot by police far more often than is evident in the FBI data, The Post has found — at more than double the rate for white people.”
Washington Post

Racism remains a public health problem. A new global review of data published in a series in the medical journal Lancet finds that racism is a “profound” and “insidious” driver of health inequalities around the world, which has been largely overlooked by health care professionals and policymakers. “Racism and xenophobia exist in every modern society and have profound effects on the health of disadvantaged people,” said the lead author, professor Delan Devakumar of University College London. “Until racism and xenophobia are universally recognised as significant drivers of determinants of health, the root causes of discrimination will remain in the shadows and continue to cause and exacerbate health inequities.” The Guardian builds on these insights with their own reporting below.
The Guardian

“We make music so that people enjoy it… the best, magical.”

—Miguel Tomasín, Argentinian drummer and frontman for one of South America’s most influential underground acts. He was born with Down Syndrome.