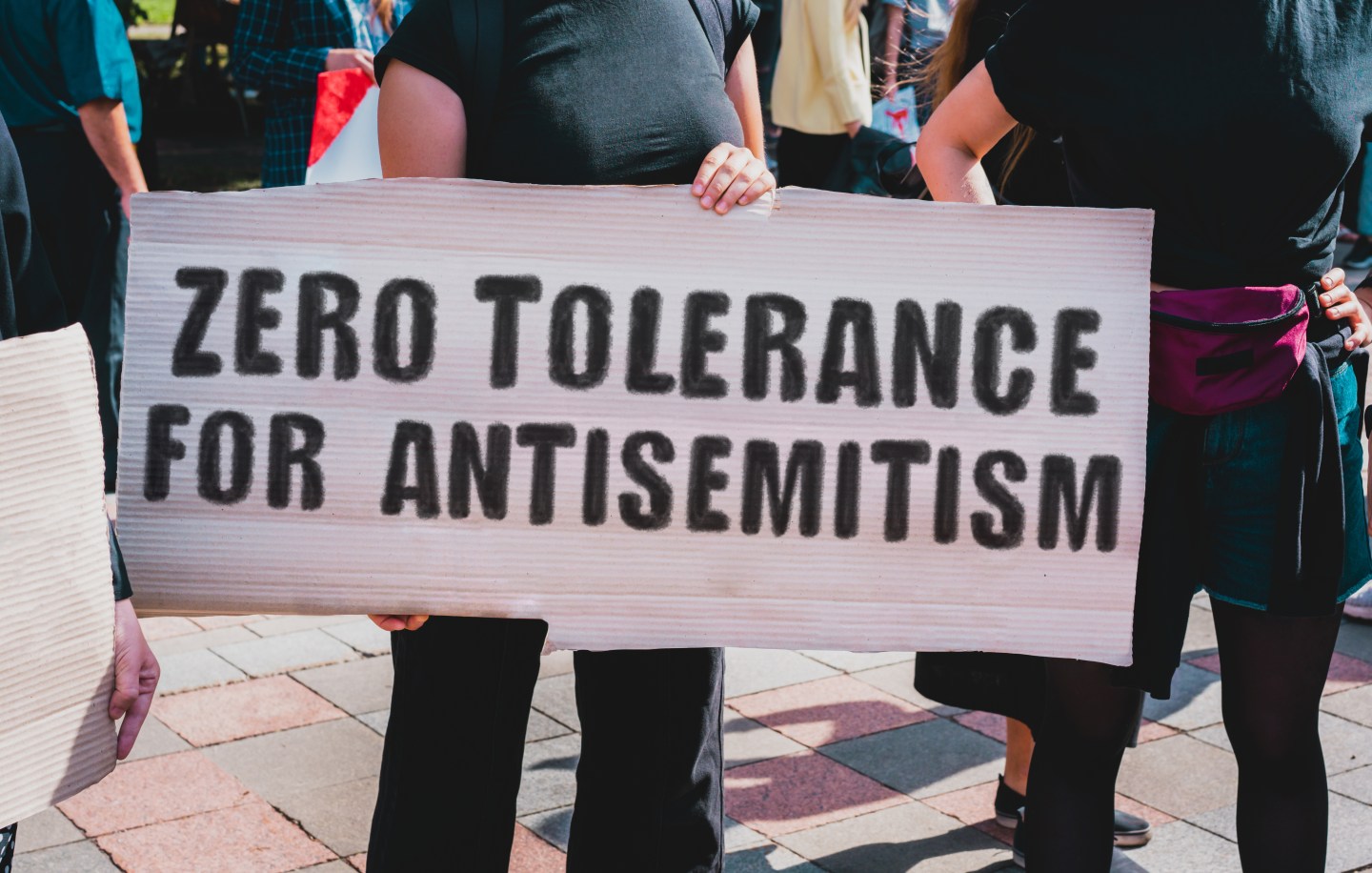 Business leaders need to have a firm stance, and an action plan, for addressing the rise of anti-Semitism in and out of the workplace.
Andrii Koval—Getty Images

The normalization of anti-Semitism has reached a critical juncture by any measure you choose to use.

This is me raising the alarm.

But this is not a political story. This is history repeating itself.

Fuentes is the founder of the America First Political Action Conference, the white-supremacist organization which held its first annual in-person event this past February. Among the guests were Georgia lawmaker Rep. Marjorie Taylor Greene and a white supremacist YouTuber named Vincent James, who relied heavily on the “Great Replacement” theory and other racist tropes in his remarks. “We will no longer be hypnotized by talks of slavery or genocides that happened 100 years ago…Just because [POC] are arrested & imprisoned at higher rates…doesn’t mean the criminal justice system is racist…[POC may just] commit the majority of crime.”

Earlier this month, the Senate Homeland Security and Governmental Affairs Committee released a report detailing how advanced the threat has become. “National security agencies now identify domestic terrorism as the most persistent and lethal terrorist threat to the homeland,” an increase attributable to “white supremacist and anti-government extremist individuals and groups.”

With the dangerous addition of a newly under-moderated Twitter—now embracing disinformation and right-wing propaganda—the threat is amplified.

The report concludes federal law enforcement has not devoted the proper resources to address the threat. “The difficulty with addressing violent domestic terror has all too often been that the ‘bad guys’ look too much like the rest of us,” former prosecutor Joyce White Vance tells Washington Post columnist Jennifer Rubin, clearly meaning white people. (They may even be law enforcement.) A systemic bias against classifying white supremacist rhetoric as dangerous means that groups tend to be considered low-level threats. “We are paying the price for that failure now,” Vance says.

And by we, she doesn’t mean the people who actually see themselves as “the rest of us.”

That brings me back to the alarm. What is to be done now, before it’s too late?

This is the question facing officials at Boston University, which has a student body that’s 25% Jewish and has seen an alarming uptick in anti-Semitic speech and incidents. “The more the rhetoric gets normalized, then behaviors do as well,” says Ingrid Anderson, a lecturer and associate director of Boston University’s Elie Wiesel Center for Jewish Studies. “There’s rhetoric that has become more acceptable and rhetoric that people slowly begin to act on. This is where we get nervous.” Anderson is creating a for-credit class to help excavate the history and dangers of anti-Semitism but acknowledges that this is a difficult time. “I think a lot of us are at a loss as to what the [BU] administration can do, other than condemn anti-Semitism, which they have done,” she says. “I can respond with what my tools are—to develop a class and make sure it fulfills Hub credits, so people who might not otherwise take it will take it and learn something.”

So, what should corporate America be doing with the many tools it has at its disposal?

“There has been a rising tide of hatred,” Andrea Lucas, a commissioner on the Equal Employment Opportunity Commission tells the Society for Human Resource Management. “Too often, instances of antisemitism in the workplace go ignored, unreported or unaddressed.”

But now, it’s no longer just a workplace equity issue. It’s a rising tide of hatred that inevitably leads to violence.

Let us know how you’re feeling and what you’re seeing. Is your organization addressing the rise in anti-Semitism directly? Do you feel prepared to intervene if you see something? Do you feel unsafe at work or in other public spaces? What do you need? Let us know what’s on your mind, subject line: Anti-Semitism, and we’ll compare notes in a future column.

This is only going to get worse.

If you were a person coming of age in 1980, there are probably many songs from that era that will immediately launch you back into your younger feels. For many in the creative class, those songs likely came from Fame, the Oscar-nominated musical which followed the hopes and (dashed) dreams of students from New York’s legendary High School of the Performing Arts. And for the younger, entrepreneurial me, who worked with artists, designed exhibits, ran galleries, and roomed with dancers eager to light up the sky like flames, that song was “Out Here On My Own.” Nothing else quite captured the angst of not knowing how your own story would turn out.

It reduces me to a puddle to this day.

But it wasn’t just that we were impossibly ambitious talents navigating a competitive world, it was the added layer of lethal uncertainty: AIDS raised the specter that plenty of us might not live at all.

That was partly on my mind when I learned that Fame star Irene Cara had died, unexpectedly and way too soon at age 63.

She herself was an entertainment miracle, an Afro-Latina singing powerhouse with the stage presence of a thousand stars. Or, as writer Keith Murphy says so beautifully in this must-read tribute, an “ability to transform slick early ’80s, headband-adorned anthems into uplifting statements that felt like spiritual testimony.” Cara, who played the vulnerable Coco Hernandez, became an instant star, earning two Oscar nods (including for “Out Here On My Own”) and two Grammys, one for best new artist and female pop vocal performance, and a Golden Globe nomination. Then, in 1984, she won an Academy Award for best original song as one of the co-writers of the title song for the film, Flashdance.

Cara represented the voice of artistic possibility at a time when being an artist who was young, maybe queer, Black, brown, immigrant, from a working-class family—or any mix of any thereof—was even more fraught with danger than usual. Without warning, the most promising artistic voices were being tapped on the shoulder, seemingly at random, by a grim reaper.

Given that backdrop, it was even more disheartening to learn that what kept Cara from reaching the heights of fame she clearly deserved was a more mainstream peril.

The year after she won the Oscar, she was forced to sue Al Coury and Network Records for $10 million for songwriting credit and royalties for her contributions to the Flashdance soundtrack, blaming Coury, an industry executive, of misleading her. The protracted legal battle turned vicious. “All of a sudden, I was hearing stories about how difficult I was to work with, ridiculous rumors about drugs and what a diva I was,” she said in a 2001 interview. A California jury awarded her $1.5 million in 1993. But backlisted in entertainment circles, Cara had long stopped working very much.

The unnecessary loss of Cara’s contribution over the years is the story of exclusion writ large. That a person of her caliber was able to dodge wealth gaps, underestimation, racism, misogyny, even a terrifying epidemic, just to be shut down by power players who wouldn’t pay her for her work is a familiar form of tragedy.

“If you go back to the 50s, it's the exact same character sketch today: African-American, poor, looking for a way out of their circumstances, and using their talent as a way out," Eric Holt, an assistant professor of music business at Belmont told Unpaid Royalties, a Vice series on inequity in the music industry. "That is easy to exploit: 'Let's give them a little bit, and they don't even know the value of what they're selling us for this little bit.'"

Now we know how Cara’s story ends, and it makes me sad to think of her being out there on her own for so long. Being shut down for standing up for herself wasn’t the power ballad she expected, but it’s the anthem we all still need.

We don’t know enough about the experience of transgender people in the U.S., and an important survey aims to change that. The 2022 U.S. Trans Survey opened to the public last month, and over 33,000 people have pledged to complete it before it closes on Dec. 5, 2022, says 19thNews. The online survey is the work of the National Center for Transgender Equality, which first fielded a version of the survey in 2015. It was then the largest-ever data collection focused on the lives of trans people, far outpacing the National Transgender Discrimination Survey in 2008 and 2009, on which a lot of policy has been based. The survey is available in English and Spanish, please share widely.
U.S. Trans Survey

"The decisive antisemitic book which I read at that time and the book which influenced my comrades…was Henry Ford’s book, The International Jew. In those days, this book made such a deep impression on my friends and myself because we saw in Henry Ford the representative of success. In the poverty-stricken and wretched Germany of the time, youth looked toward America, and apart from the great benefactor, Herbert Hoover, it was Henry Ford who to us represented America.”

—Baldur von Schirach, a former Reich youth leader of the National Socialist German Students League, testifying to his radicalization at his trial at Nuremberg, in 1946.