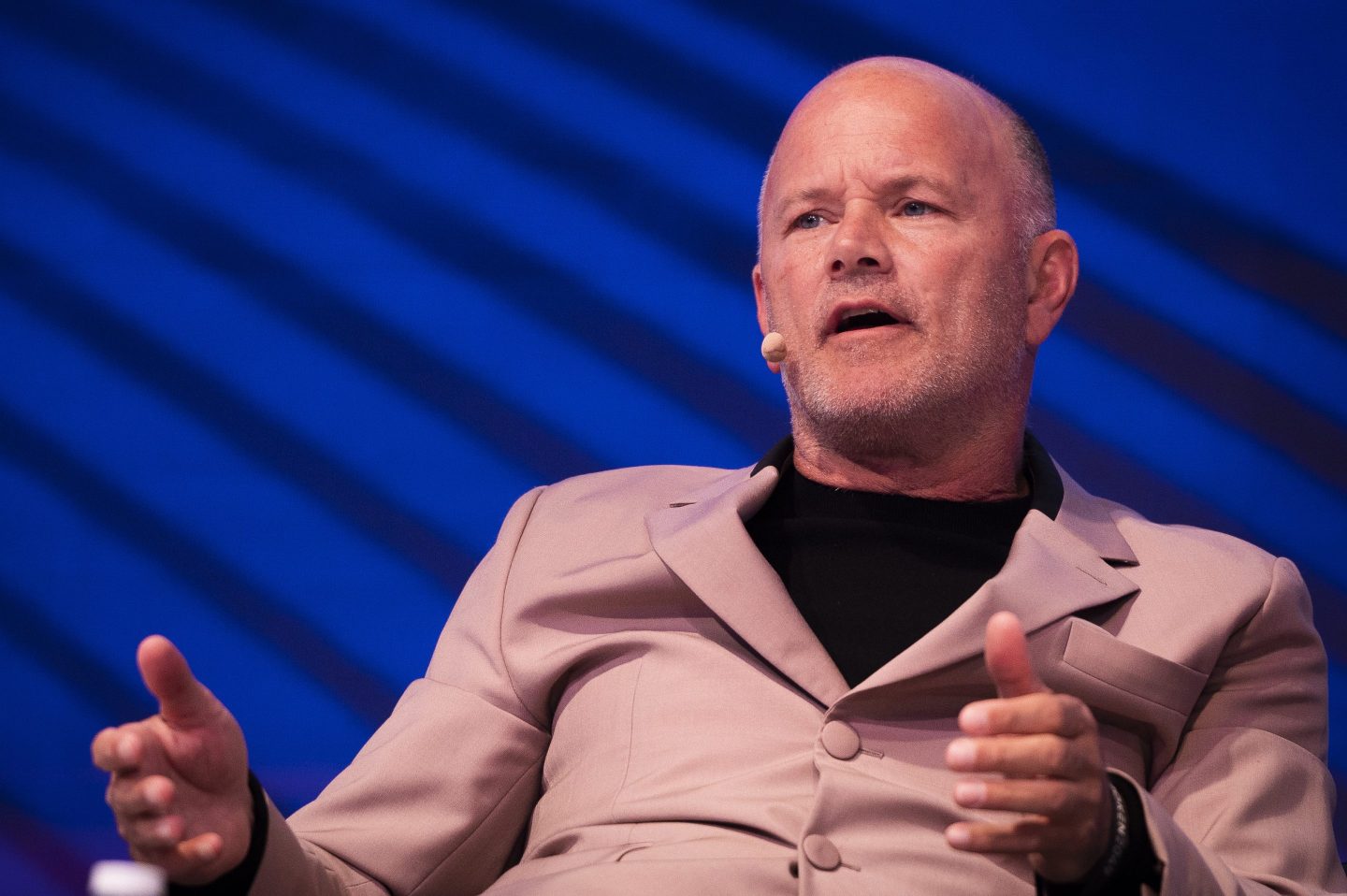 Mike Novogratz, founder and CEO of Galaxy Digital, speaks during the TOKEN2049 event in Singapore on Sept. 28.
Edwin Koo—Bloomberg/Getty Images

As both CEO of Galaxy Digital Holdings and a Bitcoin maximalist, Mike Novogratz has taken many hits from the crypto winter, and the collapse of FTX into bankruptcy is just the latest blow.

Last month, Novogratz’s crypto financial services firm disclosed $76.8 million exposure to FTX, while Novogratz has lost 64% of his net worth this year, which is now down to $1.8 billion, according to the Bloomberg wealth index.

Following Bankman-Fried telling the New York Times DealBook Summit this week “I didn’t ever try to commit fraud,” Novogratz talked to Bloomberg TV on Thursday, and he’s seen enough to make a call.

“Sam and his cohorts perpetuated a fraud,” Novogratz said. “They used customer money to make bets that he ‘poorly risk managed’ after he made them.” He added that it was “kind of surprising that his lawyers are letting him speak,” although as Fortune’s Jacob Carpenter noted, Bankman-Fried’s comments increasingly have a lawyerly ring to them. “Having watched two interviews, the word ‘delusional’ kept coming to mind. He’s in a reality that is not real. A lot of narcissism, a lot of grandiosity.”

“The problem was, he took our money. And so he needs to get prosecuted,” Novogratz said, predicting that “people will go to jail, and should go to jail.”

FTX imploded in spectacular fashion last month, surprising many inside and outside the crypto world. The $32 billion exchange had established itself as a leader in the field, having enlisted star athletes and other celebrities to build its brand. Its collapse shook confidence in the cryptocurrency sector and sparked renewed calls for tighter regulation.

Bankman-Fried resigned as FTX CEO on Nov. 11, the same day that the company, along with affiliated trading arm Alameda Research, filed for bankruptcy. That followed a liquidity crunch stemming from either a crypto version of bank run or the sudden realization of a massive fraud, with frantic FTX customers making $6 billion in withdrawal requests in a matter of days amid questions over the exchange’s solvency.

A key accusation leveled against Bankman-Fried is that he used customer funds from his crypto exchange to fund risky bets at Alameda Research.

“I didn’t ever try to commit fraud on anyone,” Bankman-Fried told the DealBook summit (note the word “try”). He added that he was excited about the prospects of FTX just a month ago, which he saw as a thriving and growing business. “I was shocked by what happened this month. And reconstructing it, there are things that I wish I had done differently … Clearly I made a lot of mistakes.”

Some notable investors sided with Bankman-Fried and his seeming incompetence defense this week. Bill Ackman, the billionaire founder of hedge fund Pershing Square Capital Management, tweeted Wednesday: “Call me crazy, but I think @sbf is telling the truth.”

Kevin O’Leary, a star of the TV show Shark Tank and an investor in FTX, took a similar position, tweeting: “I lost millions as an investor in @FTX and got sandblasted as a paid spokesperson for the firm, but after listening to that interview I’m in the @billAckman camp about the kid!”

But Novogratz believes Bankman-Fried “will be investigated, he will be prosecuted, and if the facts turn out the way I expect them to, he will spend time in jail.”

“I do think people will wonder, why is the guy not in handcuffs if he did something wrong? White-collar crime takes a long time to prosecute, and you’re going to see this happen more slowly than most people want, both the regulatory response and [prosecution],” Novogratz added.

Last week, Mark Cuban, billionaire owner of the Dallas Mavericks, told TMZ that Bankman-Fried should be worried about prison time.

“I don’t know all the details, but if I were him, I’d be afraid of going to jail for a long time,” he said. “It sure sounds bad. I’ve actually talked to the guy, and I thought he was smart, but boy, I had no idea he was going to, you know, take other people’s money and put it to his personal use. Yeah, that sure…seems like what happened.”

Bankman-Fried, whose fortune reached $26 billion during FTX’s rapid ascent, suggested this week he’s struggling with finances. On Monday, he told Axios he had just $100,000 in his bank account. At the DealBook summit, he said he had “close to nothing” left. And when he was asked how he was paying his lawyers during a Twitter Space hosted by Mario Nawfal, he replied, “That’s something I’m trying to figure out right now.”

Novogratz called the FTX fiasco a “setback for crypto,” but he remains bullish on the sector, adding, “This too shall pass.” His firm recorded a $555 million loss in the second quarter, due partly to the stablecoin terra and its related cryptocurrency, luna, collapsing. Last month it announced it would cut as much as 20% of its global workforce, and registered a $68.1 million loss for the third quarter.

But Galaxy, currently listed in Canada, remains committed to a Nasdaq listing at some point, and Novogratz also senses some opportunity in the current crypto downturn. “There will be a lot of distressed assets,” he noted. “We’re looking at some small acquisitions.”

Fortune reached out to Galaxy Digital, FTX and Bankman-Fried for comment but did not receive immediate replies.