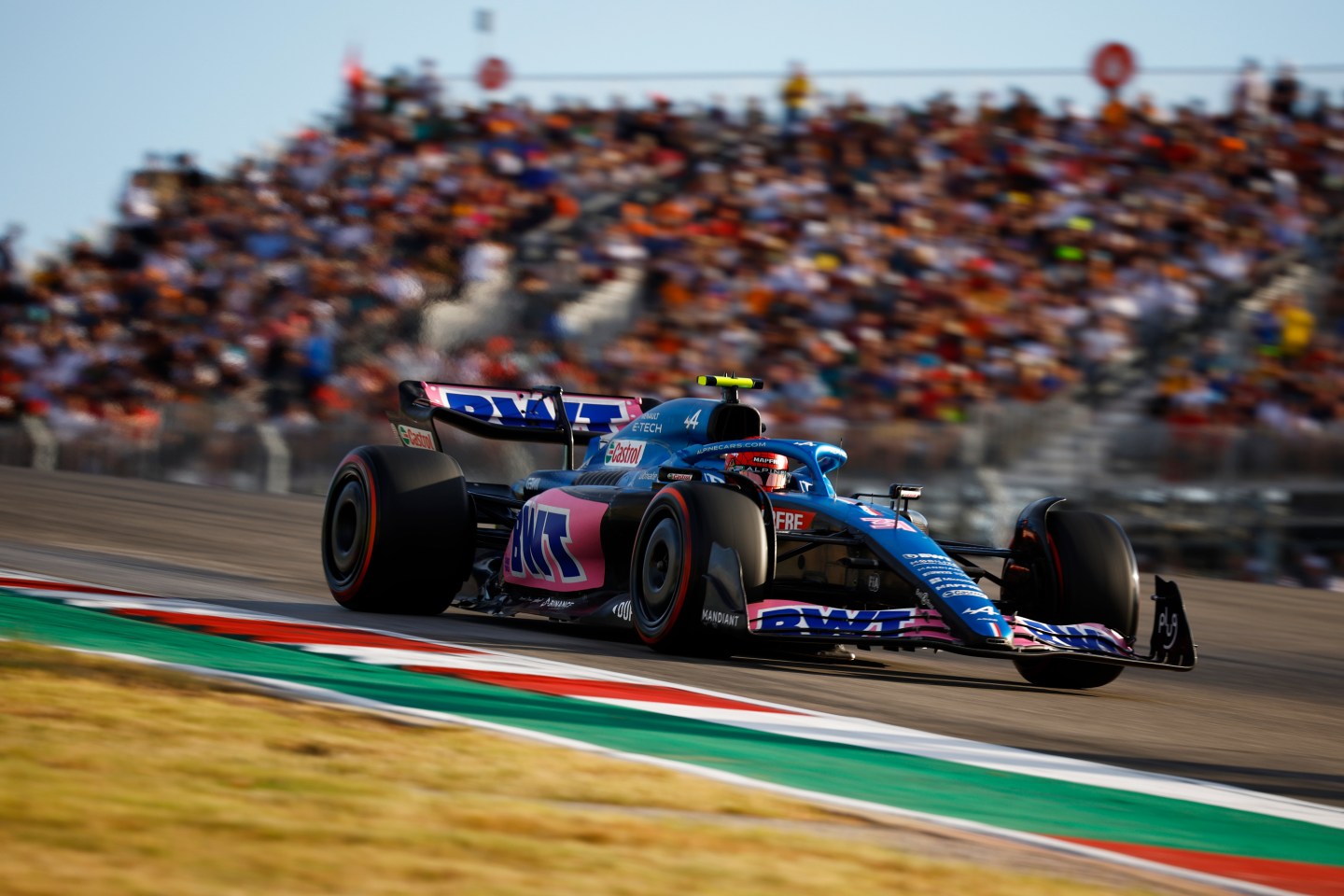 Esteban Ocon of France driving the Alpine F1 A522 Renault ahead of the U.S. F1 Grand Prix at Circuit of the Americas on Oct. 22, 2022, in Austin.
Chris Graythen—Getty Images

A dozen engineers in blue polo shirts emblazoned with the Alpine F1 Team logo glide across the garage at the Circuit of the Americas in Austin, ready to race into the pit lane and change a smoking tire in two seconds flat.

Others puzzle over computer monitors installed in the center of the garage. They, along with 14 more sitting in a silent mission-control–like room in the paddock, are looking to minimize milliseconds as Alpine’s two drivers race around the track at 200 miles per hour. Formula 1’s open-wheel single-seaters emit more than a million data points per second to the cloud. From there, the information is routed to the team garages as well as to scores of support staff across the Atlantic.

On the 23rd lap—with 33 more to go during October’s Formula 1 Grand Prix—the polo-clad crew holds a collective breath, watching Aston Martin’s Lance Stroll collide with Alpine’s Fernando Alonso. The crash sends Alonso airborne into a wall and generates enough debris to damage the front wing of the car behind him—which happened to be helmed by Alpine’s other driver, Esteban Ocon.

Both Alpine drivers continued the course—to the amazement of spectators—thanks to the copious data the cars generate in real time.

“Fernando’s contact with the barrier was a big one, but we were able to tell from the data that the suspension had not suffered any significant damage and was safe to continue,” Ciaron Pilbeam, chief race engineer for the Alpine team, tells Fortune. “For Esteban’s car, the data showed a small effect on performance but not enough to require changing the front wing at a pit stop, which would have taken several seconds more than a normal pit stop.”

These days, F1 teams use the cloud to shave hundredths of a second off their lap times—the razor-thin margin between winning and losing. Alpine, French automaker Renault’s sports car brand, is an underdog team going all in on Moneyball-style analytics this season to challenge the series’ reigning champs with blockbuster budgets such as Red Bull and Mercedes-Benz.

Data can democratize the notoriously expensive sport for small-budget teams that lack the funds for, say, “the best and greatest wind tunnel,” according to Alpine CEO Laurent Rossi. Digitizing the research and development can level the playing field for teams previously at a disadvantage vis-à-vis the behemoths.

“Simulators are not capital intensive and much cheaper than physical testing,” Rossi says. “Everyone can buy one.”

The data-driven approach has changed the sport dramatically over the past few years. The cars now contain more than 300 sensors measuring a wide range of inputs, including temperature, tire pressure, and trajectory. The figures collected from Formula 1’s 10 teams over the season can generate more than 1 billion simulations that shape each team’s race-weekend strategy.

“The car is packed full of sensors because the difference between pole position and the back of the grid can be as little as 4%,” says Edward Green, head of commercial technology for McLaren Racing. “It’s a sport of superfine margins, and you’ve got to find any single way you can in order to gain an advantage.”

Just 25 years ago, F1 cars recorded rudimentary data on floppy disks that the teams then mailed home for analysis. Now, they use the cloud to capture 1.5 terabytes of data during the race weekend and transmit it across the world in near real time, narrowing latency from a few days to mere milliseconds.

“That doesn’t sound like a lot of time,” Green said. “But in the world of Formula 1, a few milliseconds means a few meters on the track.”

The McLaren team uses Dell’s prototyping and simulation software, as well as Cisco’s Webex conference service, to collaborate even when, for example, the engineers are in England, the drivers are in Australia, and the cars are in Canada.

The 10 teams on the grid use a range of cloud technology providers. Red Bull uses Oracle Cloud software to analyze crucial decisions, such as when to make a pit stop and which tires to use, to clinch the team’s first-place finish in Austin. Ferrari’s F1 team works with Amazon Web Services, which provides cloud computing and machine learning to run simulations and improve race day performance.

Alpine’s software developer partner KX assimilates reams of data for review as the team treads the 23-circuit season that stretches from Austin to Australia. On race day, the data is shared and analyzed with another 60 engineers based at Alpine’s factory in Enstone, U.K., and operations room in Viry-Châtillon, France.

Prior to working with race cars, KX focused on financial markets, another arena where milliseconds matter. Why reinvent the wheel, Alpine executives thought, when they could cut and paste from KX’s experience helping high-speed traders gain a one-second advantage over the competition?

But raw data alone is not a magic bullet, says Nathan Sykes, the Alpine team’s chief information officer. The more data the cars generate, the more challenging it is to organize, especially when trying to account for what the other 19 cars on the track may do at any given time.

The next frontier for Formula 1, he explains, will be software that hones artificial intelligence to extract insight and make relevant inferences. The data is useless unless a team can unlock a competitive advantage through computer modeling.

“It’s a lot of data to see through in order to get to what you want,” Sykes says.

But countless simulations could not have foreseen that Stroll’s car would collide with Alonso’s at turn 12, damaging both Alpine cars in one fell swoop. Alonso and Ocon went on to place seventh and 11th, respectively, out of 20 drivers.

“Data will probably give you the bulk of the performance you want to get,” Rossi says. “And then there will be a bit of the human factor, which is nice, because it’s sports, after all.”