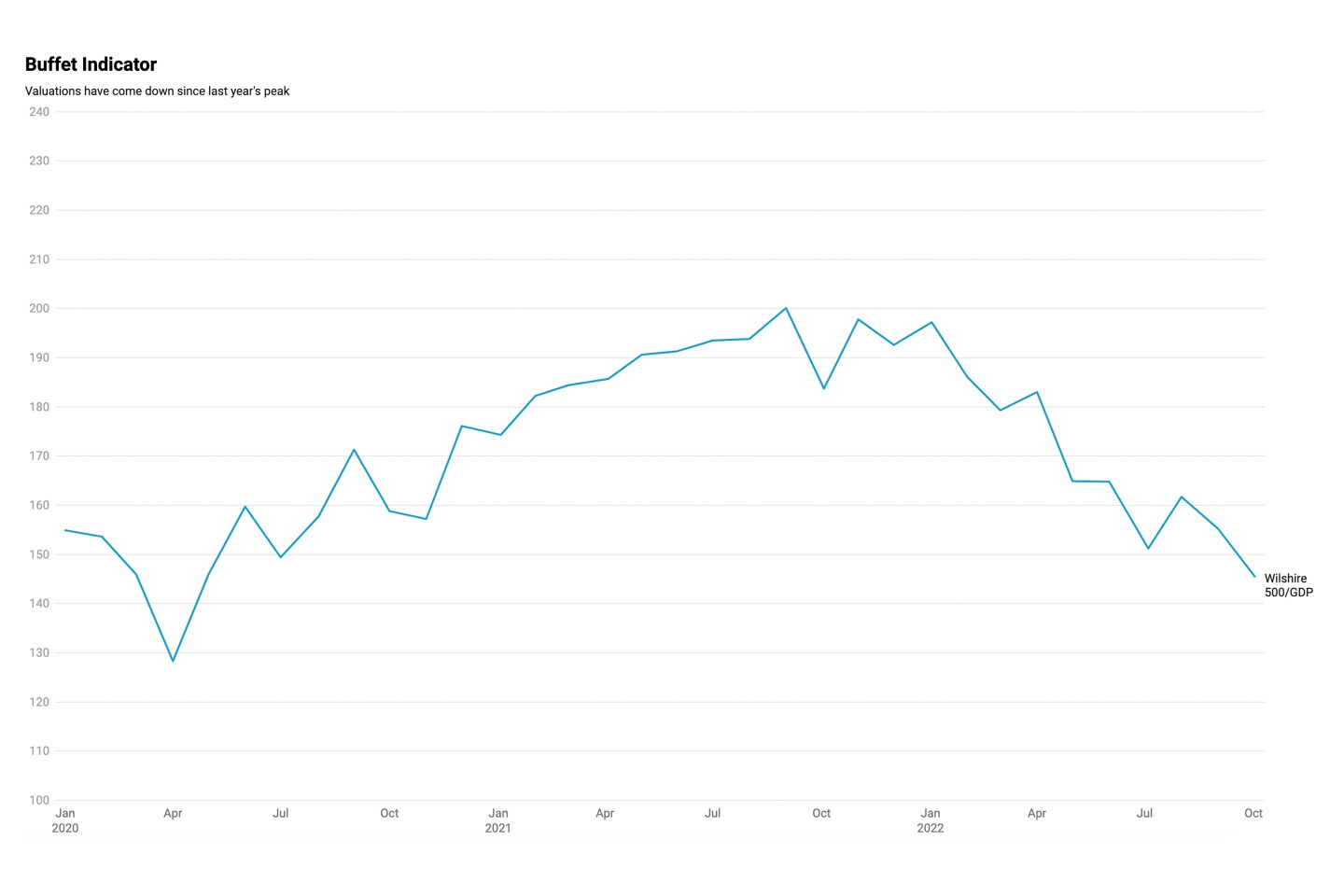 The so-called Buffett Indicator shows that valuations have come down significantly.

Volatility has been the norm in 2022, and from the looks of it, don’t expect 2023 to be much different. But the hardest part for investors is trying to wager how much stocks will fall, and when a new bull market might begin. Dive in too early and you’re at risk of, as the famous saying goes, trying to “catch a falling knife.” But wait too long and you might find yourself wishing you’d taken the opportunity to snap up beaten-down stocks on the cheap. No one has a crystal ball, but analysts point to a few key economic indicators that can give investors a sense of where stocks might go from here.

Examining how the market has behaved in the past can provide valuable insight as to what the future may hold. Based on historical trends, the market tends to rally before recessions end. Since 1950, the S&P 500 has peaked roughly six months prior to a recession, and it’s bottomed an average of three months before a recession has ended.

Yet analysts emphasized that the number one macroeconomic factor that will affect how much further the market could fall is whether a recession hits, and how painful and protracted it is. Quincy Krosby, chief global strategist for LPL Financial, emphasized that he’s watching “depth and pain” to determine the market’s outlook.

“The recession that we’re likely to enter is going to be more classic cyclical,” explained Sean Bandazian, senior investment analyst for Cornerstone Wealth, referencing the age-old pattern of stocks becoming overvalued then pulling back. “So, it shouldn’t be as painful as” the 2008 Great Recession, which was so severe because it was caused in part by the collapse of the housing market. The recession caused by the pandemic was also an instance of a secular market factor driving the economic downturn.

Krosby noted that the labor market and consumer spending are the most important indicators that show how deeply the recession is affecting different sectors of the economy. "We live in a consumer-led economy,” she explained. Peter Cohan, business professor at Babson College, also emphasized those two metrics are important to watch to determine how long the recession will be. “If the numbers get bad, namely, if the unemployment rate goes way up and consumer spending drops, then the recession will be deeper and longer."

The bottom line: While the recession will likely be mild and the market won't crash in a 2008 fashion, your portfolio is still in for some losses in the upcoming year. “I don't expect a very-bad-case market scenario. But I do expect a reasonably bad case market scenario. It could be 15% or 20% from here,” Charles Lemonides, CIO of hedge fund ValueWorks, explained. Bandazian agreed, noting he predicted that the market had likely around 10% to 20% percent further until reaching a bottom.

Obviously, sentiment is a huge stock market driver. And when stocks are become overvalued (as they did in 2022), it leaves more room for the market to drop when investor sentiment turns. Some analysts argue that the market does not have a huge drop ahead because much of the pessimism and recession fears are already impacting the market now. “I think that we've priced in a tremendous amount of negativity here, almost universal degrees of pessimism in terms of sentiment,” nationwide chief of investment research Mark Hackett explained. “Assuming that the earnings are even close to what's currently estimated, I don't think the market has very far to go.”

Lemonides acknowledged that lower valuations will soften the fall, though he thought the market still would decline about 15% to 20% from today's levels. “The good news is that at today's prices stocks are not overdone,” he explained. “There was a big part of the market that was in bubble territory in terms of pricing and valuation, but those stocks have come down for the most part,” he explained.

The bottom line: Because the prices of stocks are not inflated by a bull market in the same way they were last year, the market has, to some extent, a cushion from the blow of the recession. While Hackett is optimistic that this will prevent a bottom much lower than the market's current rates, other analysts predict that the market will likely fall in the range of 10% to 20% below today's levels.

The policy of the Federal Reserve has been largely blamed for the market’s recent plunge, and it’s true that rising interest rates have have squeezed consumers. Yet taking a longer view, the Fed’s policy is creeping up to what used to be within a more normal range a few decades ago. “Stocks go up because people have money to buy them, and they go down if people don't have money to buy," Lemonides said. “So, when the Fed drains liquidity from the system, people will have less money to buy and stocks will probably go down."

According to Lemonides, the Fed’s policy might be something investors have to get used to, at least while the macroeconomic conditions pushing inflation remain true. Looking at this historical perspective, higher interest rates are more of the rule than the exception. As the economy recovered from the financial crisis of 2008, rates rose again before coming down during the economic crisis brought on by the pandemic. “[The past two years when rates were so low] was really an interruption of what was becoming a normal moment and…the Fed is doing stuff now to get us back to normal,” Lemonides explained.

Yet the Fed’s policy will be a driver of market sentiment in the short term, and investors will be wary as long as the Fed signals it will keep hiking. “I definitely think that the stock market will come back up as soon as everybody is convinced that the Fed is going to start lowering interest rates. That’s key,” Cohan said.

The bottom line: Investors are likely going to remain tepid as long as the Federal Reserve keeps raising interest rates. Yet taking a long term view, the baseline expectation of extremely low interest rates is more of an exception than the norm.

Despite the forecast of more market turmoil in our future, analysts emphasized that the market’s underlying macroeconomic health is not as dire as the level of market volatility may indicate. “Where we are right now, it gives me more confidence,” Hackett explained, pointing to the depressed market valuations and the market’s seasonal position. “As the [saying] goes, ‘The time to be optimistic when everybody else is pessimistic.’ That's the direction I’m leaning these days,” he said.