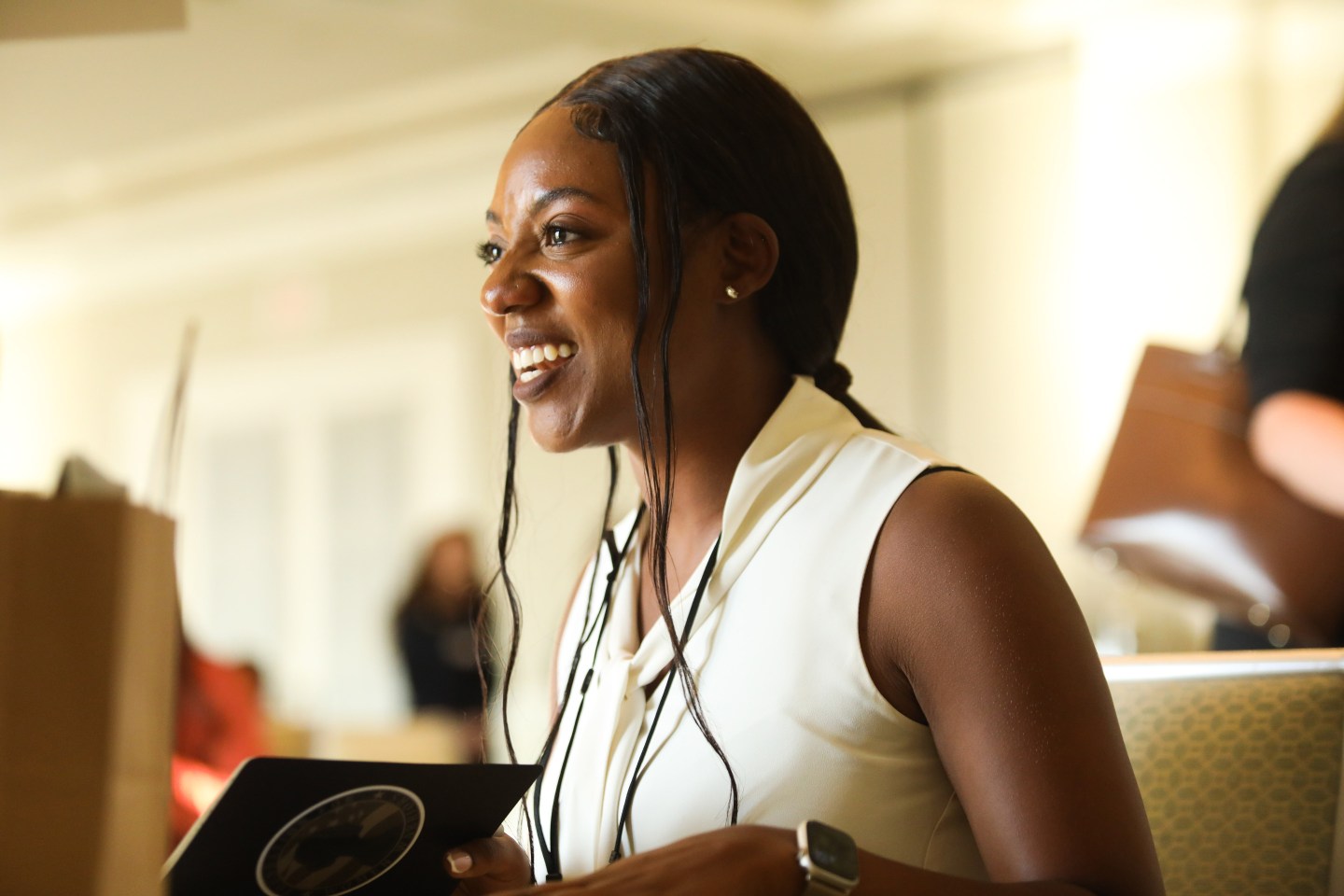 Kassandra Harriott at the Fortune Most Powerful Women Summit on October 10th, 2022 in Laguna Niguel, CA.
Photograph by Kristy Walker for Fortune

– Next chapter. A group of military veterans and service members transitioning into civilian life attended the Fortune Most Powerful Women Summit last month. After monthslong to decades-long careers in the Army, Navy, and Marines, these women are deciding what they want to do next and figuring out which jobs their military skills transfer to best.

They gathered in Laguna Niguel, Calif., to meet with Fortune 500 executive mentors from the Fortune Most Powerful Women community, who offered career guidance, interview tips, and professional connections. Alicia Boler Davis, the former Amazon S-team SVP who’s CEO of the startup Alto Pharmacy, spoke to the group about her career path and how she knew to make the jump to Amazon after a 25-year career at General Motors.

Her experience resonated with women veterans who’ve recently made similar leaps. Kathryn Warren served in the Marine Corps for 26 years and now works for a nonprofit that helps military veterans transition to civilian life. She’s noticed that veterans find it easy to master the “soft skills” that others struggle with in the workplace. “It’s a no-brainer to be on time or to motivate a group,” she says.

Kassandra Harriott is the youngest of six kids in a military family and will be the first to transition out of service next summer. At 27, she’s spent five years in the Navy. But she knew it was time to move on when her “passions didn’t align anymore.” She’d rather take the skills she gained as a training officer (organization, small group leadership, responsibility, and accountability) and use them as a project manager. Eventually, she hopes to break into interior design.

Kassandra Harriott at the Fortune Most Powerful Women Summit on October 10th, 2022 in Laguna Niguel, CA.
Photograph by Kristy Walker for Fortune

Nina Pinidi spent 17 years in the U.S. Navy. As she advanced in rank, her time in the military became more challenging—not because of the work required, but because of how male colleagues lower in the military hierarchy treated her. “It was difficult to get respect,” she remembers. Her Naval career will close at the end of this year. “I’m ready to move onto something new,” she says, but the transition is still emotional.

She’s looking for corporate positions in human resources and diversity and inclusion, which she says would utilize her skills from her time as a Navy drill sergeant. Her long-term dream is to launch what she calls “Sephora for wigs,” bringing Sephora’s style of retail and customer experience to wig shopping.

She had hoped to make it to 20 years of service but will be discharged for medical reasons, giving her some perspective. “It can happen when it’s planned, or it can happen out of nowhere,” Pinidi says of the transition to civilian life. “The most important step is to be humble enough to ask for support.”

- Making the rules. For years, women in the male-dominated VC space opted not to have kids, dedicating their attention to deal-making. Though large firms now offer generous maternity leave, several female VCs report still logging on to attend to portfolio companies, saying their success in the field depends on it. Business Insider

- Deciding affirmative action. On Monday, the Supreme Court heard arguments for two cases over whether colleges can consider race in admissions decisions. Justice Elena Kagan pointed to universities' roles as "pipelines to leadership in our society," suggesting that universities that aren't racially diverse will lead to less racial diversity broadly. Wall Street Journal

- Drop in abortions. Legal abortions across the U.S. declined by 10,000, a 6% drop, in the two months following the Supreme Court's decision to overturn Roe v. Wade, according to a report from the Society of Family Planning. In states where abortion remained legal, abortions increased by 12,000, or roughly 11%. New York Times

- RTO pink tax. Returning to the office isn’t equal for everyone. In addition to contending with higher costs of living due to inflation, women also face a RTO “pink tax,” paying more for clothes, makeup, and dry cleaning than men. ABC News

- Perfect 10. Taylor Swift became the first artist ever to secure all of the top 10 spots on the Billboard Hot 100 in a single week, following the release of her album Midnights on Oct. 21. Variety

- Georgia showdown. Democratic candidate Stacey Abrams and incumbent Gov. Brian Kemp duked it out in Georgia's final gubernatorial debate before the Nov. 8 midterm elections. Abrams brought up Kemp's record on abortion, noting he signed the state's six-week ban while avoiding commenting on allegations that Hershel Walker, the GOP nominee for Georgia's senate race, pushed women he dated to have abortions. Kemp, who leads by five to 10 points in polling, pointed to Abrams's absence from elected office over the last four years. New York Times

- Declined invitation. Climate activist Greta Thunberg is skipping out on this year’s United Nations Climate Change Conference, the biggest climate conference in the world. Thunberg criticized the event, to be held in Egypt next week, as a forum for “greenwashing,” encouraging gradual progress over radical change. Fortune

Can you get ahead and still have a life? Younger women are trying to find out Wall Street Journal

Why did it take HBO so long to make shows about women? New York Times

“In this day and age, people can say who they are and who they want to be. And I admire and appreciate that. I’m a little jealous because I didn’t have that.”

—Actor Lindsay Lohan on how today's celebrities can control their public image through social media.