Union leader Sara Nelson has advice for the CEOs of Starbucks, Amazon: Ditch the union-busting 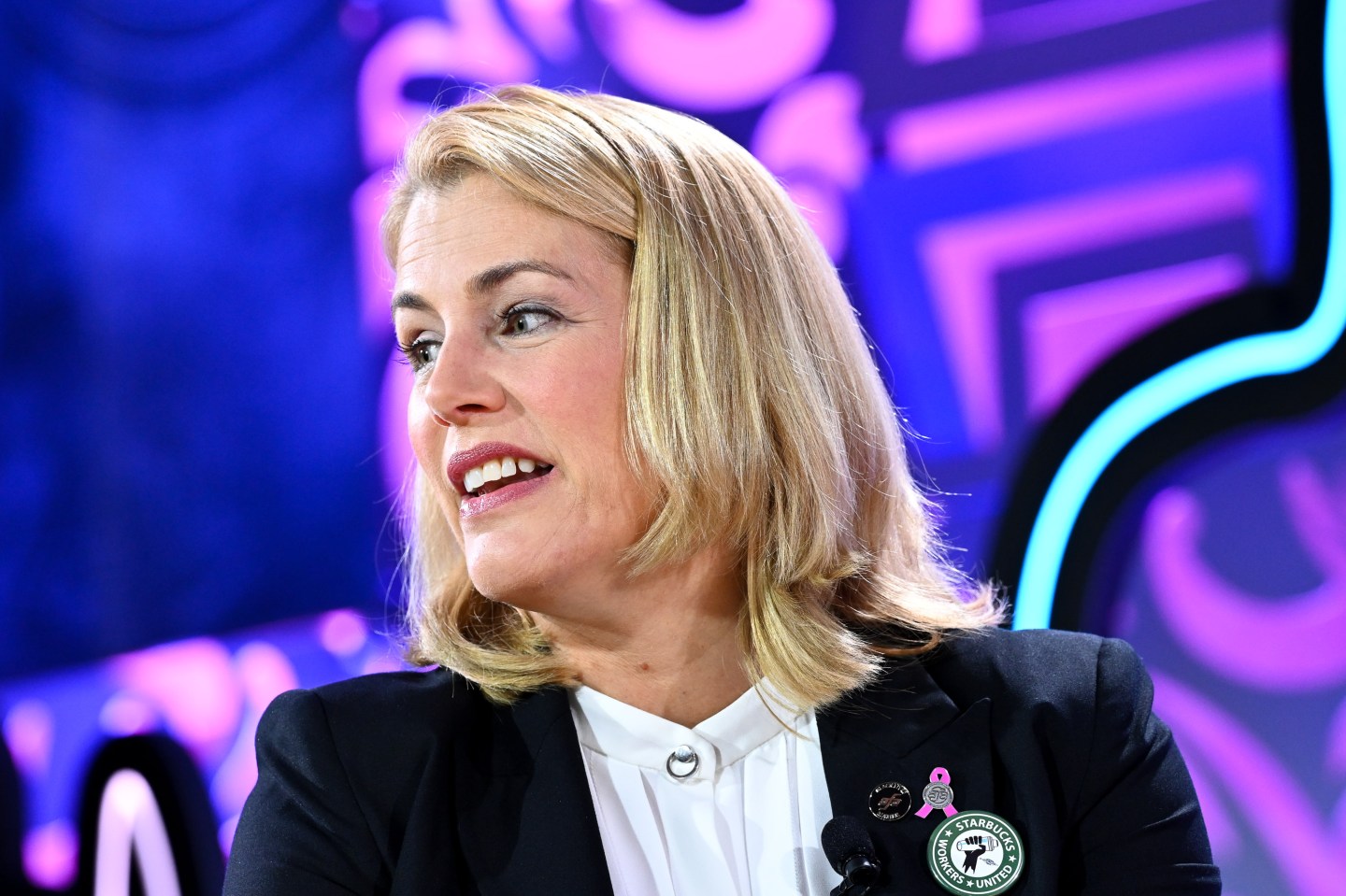 Sara Nelson, international president of the Association of Flight Attendants–CWA, AFL-CIO, at the 2022 Fortune Most Powerful Women Summit.
Stuart Isett—Fortune

Flying high. Sara Nelson took the stage at the Fortune Most Powerful Women Summit yesterday wearing a Starbucks Workers United pin. That’s because Nelson is the international president of the Association of Flight Attendants-CWA, AFL-CIO.

Nelson said she knows firsthand what Starbucks workers are fighting for—and how crucial worker protections are. She leads a 50,000-member union that fought to turn flight attendant jobs into viable careers. Nelson kicked off her career as a United flight attendant in the 1990s when she was required to take makeup classes and wear two-inch heels. Five years later, she watched seven of her colleagues and friends die when United Airlines Flight 175—one of her typical routes—crashed into the South Tower of the World Trade Center in the Sept. 11, 2001, attacks.

Sara Nelson, international president of the Association of Flight Attendants–CWA, AFL-CIO, at the 2022 Fortune Most Powerful Women Summit.
Stuart Isett—Fortune

“It’s my commitment to making sure their lives mean something that keeps me going every day,” she said of her work as a union leader.

The AFA has fought for respect in the airline industry, a sector where management thinks of its majority-female members as “their wives or mistresses,” Nelson said. And yet the organization proved critical during the COVID-19 pandemic, when Nelson advised airline CEOs to position their proposal for government bailout funds as “worker-first.” That framing allowed the industry to receive public support for workers and skirt negative public opinion of airlines.

As unionization campaigns take off at Starbucks, Amazon, and beyond, Nelson advises CEOs to quell their anti-union instincts.

“There’s a whole industry of union busters who would like to tell you that it’s better to fight the unions, and they’re going to take your money and leave your corporation in shambles. But you’re just going to destroy morale,” she said of those anti-union campaigns. Instead, businesses should appreciate the benefits unions bring to workplaces: a more informed and engaged workforce, pay transparency, and a structured way to handle workforce issues.

Fight for equality. The COVID-19 pandemic exposed the structural inequalities that working mothers face. Businesses now have the opportunity to fix them and should focus on childcare access and affordability, parental leave policies, and pay equity for parents, say Synchrony CTO Carol Juel and Girls Who Code founder Reshma Saujani. Fortune

Embracing change. Kohl’s CEO Michelle Gass says the company is using its numerous challenges as a “catalyst for change” and preparing for a likely recession next year. Fortune

Trump lawsuit. Former President Donald Trump was denied his request to delay a defamation suit from columnist E. Jean Carroll on Wednesday. His Oct. 19 deposition will now go forward as scheduled. Carroll is suing Trump over his claims that she lied and was motivated by money when she came forward with allegations that he raped her in a New York department store in the 1990s. CNBC

Spending cuts. U.K. Prime Minister Liz Truss is standing by her campaign promise not to cut public spending to reduce the country’s debt. Truss’ recently unveiled plan to cut taxes sparked market turmoil. She said Wednesday that she would reduce debt “not by cutting public spending, but by making sure we spend public money well.” BBC

Pink tax cuts. CVS will reduce the price of its store-branded menstrual products by 25% and cover sales taxes on those products in a dozen states, contributing to the effort to close the price gap between men’s and women’s health products, also called the “pink tax.” Twenty-three states already exempt such items from taxes. CNN

Under pressure. The Biden administration is now calling for the three Los Angeles city council members, whose racist remarks in a meeting were leaked over the weekend, to resign. White House press secretary Karine Jean-Pierre called the language “used and tolerated” during the conversation “appalling.” Councilwoman Nury Martinez resigned from her position as a council member on Monday, just two days after she stepped down as city council president. Bloomberg

Under the skin of Jamie Lee Curtis New York Times

Emily Ratajkowski gets candid on TikTok, Britney Spears, and her new podcast Variety

“Now is not the time to stay neutral. It’s time to get off the fence and make sure that we’re using our power.”