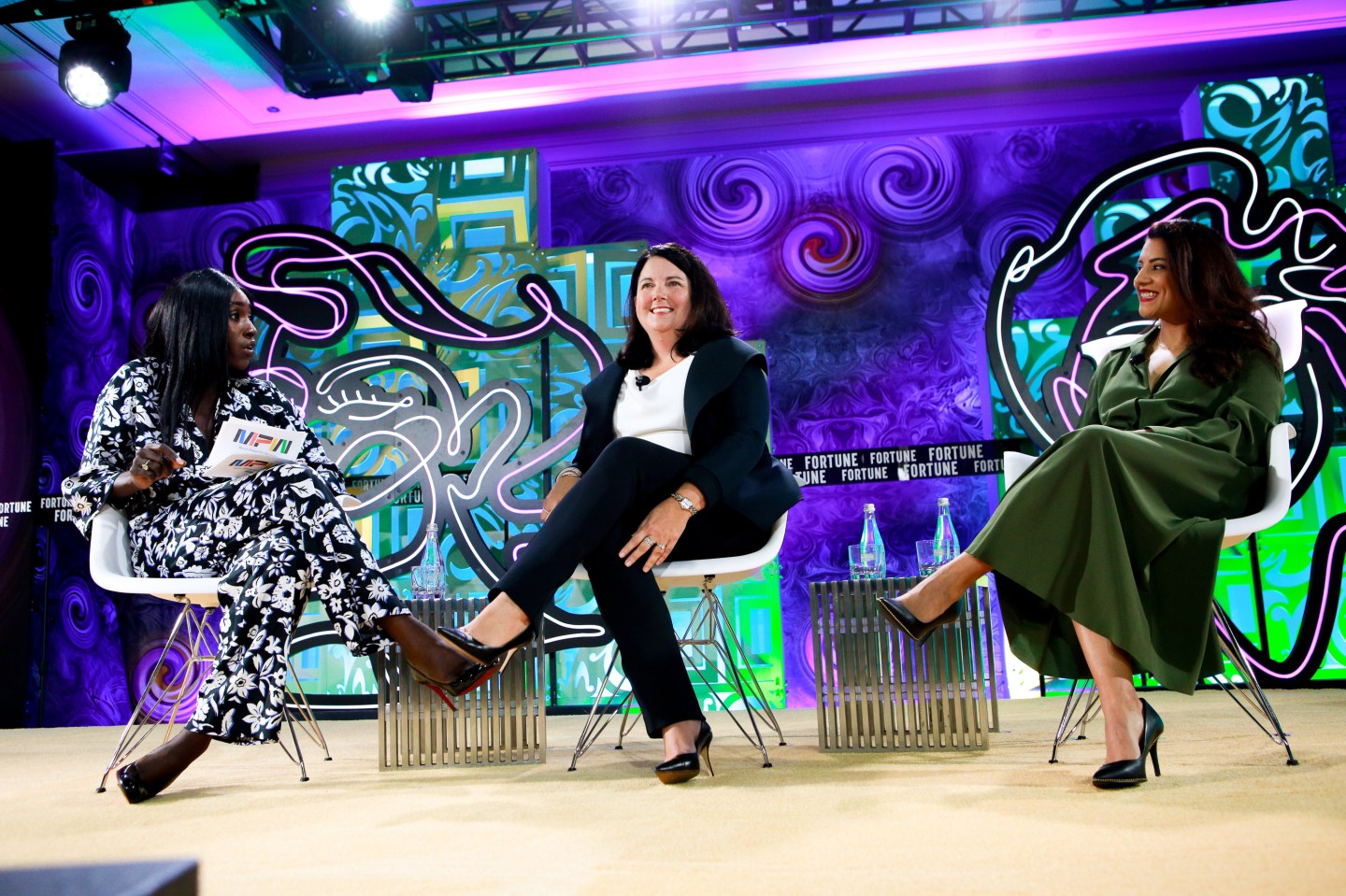 Carol Juel, Chief Technology and Operating Officer of Synchrony, and Reshma Saujani, Founder of Girls Who Code, join Fortune's Ruth Umoh to discuss how businesses can restore women to the workforce.
Kristy Walker for Fortune

The pandemic was a wake-up call to the ongoing inequalities faced by working moms, too many of whom had to choose between their careers and their roles as primary caregivers at home.

Now, as society recovers from COVID-19, will businesses use the opportunity to tackle the structural workplace inequities exposed by the pandemic?

At Fortune’s Most Powerful Women Summit in Laguna Niguel, Calif. this week, Synchrony Chief Technology and Operating Officer Carol Juel and Girls Who Code founder Reshma Saujani discussed the experience of the past two years and what it says about the importance of finishing the fight for women’s equality.

There are one million women who were employed before the pandemic but who left the workforce over the last two years, and “one of the key components of that is childcare,” said Juel.

And childcare is just the beginning of supporting moms in the workplace, said Reshma Saujani, Founder of Girls Who Code. Saujani described how women have been told to “Girlboss their way to the top” for far too long, and it’s just not sustainable.

Instead of telling women to practice a power pose or be a little bit more ambitious, we need to “finish this fight for equality once and for all by fixing the structure,” Saujani said. Here are some of the key things Saujani and Juel said business leaders can do to continue the fight for equality:

Recognize childcare as a business issue

Both Juel and Saujani agree the first step is tackling the issue of childcare and making it affordable.

Synchrony, a consumer financial services company, recognized the extent that childcare impacted their employees during the pandemic when most childcare centers closed down, and working moms were unable to find emergency backup childcare. They took steps to resolve this issue by expanding a benefit for their workers, which allowed moms to hire an in-home childcare worker so they could focus on their job role.

“Childcare is a business issue,” said Juel, “And childcare is something that we need to address to get those women back in the workforce.”

After having her newborn, Saujani was simultaneously running Girls Who Code while virtually homeschooling her kindergartener, on top of trying to save her non-profit. “It nearly broke me.”

Saujani said she learned the hard way that ‘having it all’ is a euphemism for doing it all, and it’s just not sustainable.

“90% of women basically go back to work 10 days after having a baby,” said Saujani. Women who return back to work too quickly are losing out on precious time to bond with their newborn, which can impact their mental health in the long run.

“The gender pay gap is not a gender pay gap, it, it’s a motherhood gap,” said Saujani. On average, dads are paid 58 cents more on every dollar than moms. That’s not only an injustice to the work women perform every day, it’s a situation that perpetuates women’s lower representation in senior roles.

The pay gap makes it more economically rational for the mom, not the dad, to drop out of the workforce. Industries like technology are hit even harder by the motherhood penalty—50% of women leave their jobs in tech by the time they turn 35 because they become a parent, said Saujani.

According to Saujani, that ties back to the childcare problem. If we can make childcare more accessible and affordable, we can also resolve other issues that lead to women down shifting their careers or leaving the workforce altogether.