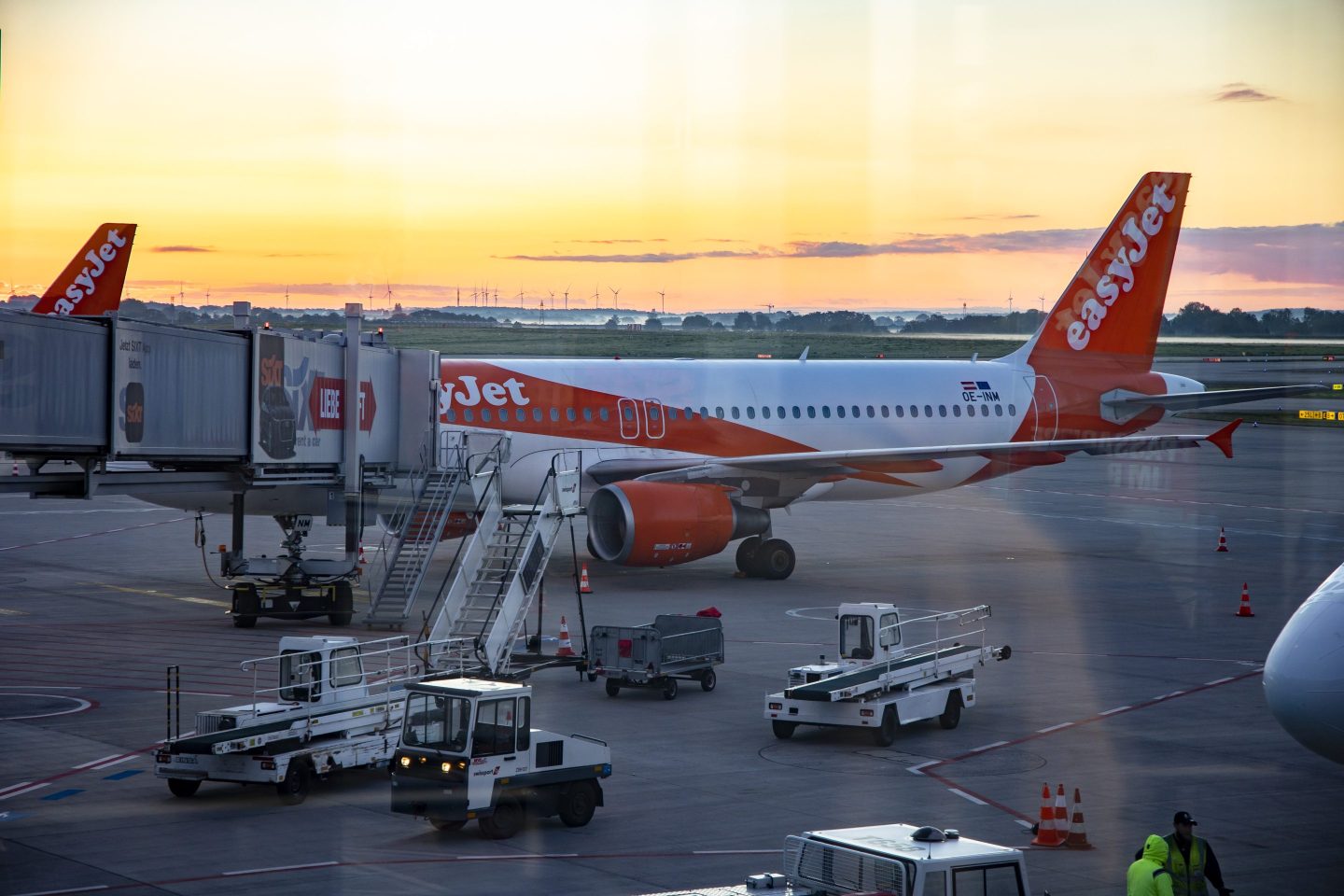 U.K.-based short haul airline Easyjet announced this week that it will ditch its carbon offset scheme—which it insists was always a “short term measure”—in favor of a more actionable net-zero emissions scheme. But, of course, the budget airline’s plan doesn’t countenance the most direct means of cutting carbon emissions: flying less.

The airline hasn’t set any hard targets for reducing its overall emissions, focusing instead on reducing “carbon intensity,” or the volume of CO2 produced per passenger, per kilometer. Easyjet aims to achieve a 35% reduction in carbon intensity by 2030 and a 78% reduction by 2050, relying on direct air carbon capture to suck up the remaining 22% of greenhouse gas emissions.

(That’s a tall order. According to Fortune, decades of carbon capture work by Shell has to date only removed the equivalent of 8% of the carbon produced by the EU’s total aviation industry in an average year.)

Focusing on “carbon intensity” leaves room for Easyjet to continue increasing its total carbon footprint until the day it achieves its ultimate goal of “zero carbon emissions flying.” The company has set no deadline for that goal.

Several of Easyjet’s objectives for cutting carbon intensity depend on improving operational efficiency, such as buying new planes that can glide for longer, and pressuring governments to streamline flight routes. But the core of Easyjet’s reduction strategy relies on substituting kerosene with Sustainable Air Fuels (SAFs).

SAFs are lower-carbon products such as recycled cooking oil, biofuels made from other organic feedstock, or chemically-produced synthetic fuels, such as hydrogen. But biofuels are not designed to completely replace the kerosene that currently powers planes.

SAFs are what EU regulators call a “drop-in” alternative, which can be mixed in with kerosene to substitute a portion of the total fuel volume. That means incorporating SAFs won’t necessarily reduce the airline industry’s total fossil fuel usage if overall fuel consumption grows.

According to BP, SAFs can “be blended at up to 50%” with traditional jet fuel. But the oil major also expects air travel to double by 2050 which, crudely, would mean that with a 50% SAF-kerosene mix, the aviation industry would still be burning the same volume of fossil fuels in 30 years as it does today.

The other issue with SAFs is that they are in extremely limited supply. According to the International Air Travel Association (IATA), global SAF production is at about 1 million barrels of fuel per year. The global aviation industry burns roughly six times that volume of kerosene every day. To be a useful tool in cutting airline carbon emissions, SAF production needs to surge more than 3,500-fold by 2050, the IATA says.

There simply isn’t enough leftover cooking oil in the world to achieve that growth, and designing a fuel economy that depends on increased waste elsewhere is hardly sustainable.

Easyjet’s long-term goal is to operate a fleet of aircraft that emit no greenhouse gas: planes that burn green hydrogen. The airline’s engine partner, Rolls-Royce, is close to demonstrating a hydrogen-power jet turbine and if the technology takes off hydrogen planes could prove a viable option for short-haul transport.

The head of the World Bank, David Malpass, who was appointed by President Donald Trump, sought to reassure staff and the public that he believes in man-made climate change last week, after refusing to state so during a live event at New York Climate Week. Asked three times whether he believed greenhouse gas emissions from human activity are causing climate change, Malpass eventually answered that he is “not a scientist.” Activists responded by calling for his removal as chief of the global fund, which is supposed to support developing economies. Fortune

EU officials suspect sabotage in the Nord Stream gas pipe that connects Russia to Europe after the pipeline sprung a massive leak along its route under the Baltic Sea, creating a vortex of gas bubbles a kilometer wide on the sea's surface. FT

Yet another loss-making Chinese electric vehicle company is planning to go public, potentially providing Hong Kong with its largest IPO of the year. The Zhejiang-based Leapmotor, founded in 2015, says it is aiming to raise $800 million in its debut this week. The company, which reported a net loss of $414 million last year, previously anticipated raising over $1 billion but cut its expectation following lukewarm investor sentiment. The EV market in China is booming, but is already home to several dominant players. FT

The United Nations Human Rights Committee determined last week that Australia had violated the rights of Indigenous Torres Strait Islanders by failing to take action to mitigate the effects of climate change on the islanders’s home. Australia has sovereignty over most of the Torres Strait Islands and has built some seawalls to limit the adverse effect of increased extreme weather. Following a lawsuit from several of the islanders, the UNHR decided Australia should have done more. The UNHR ruling is not legally binding but sets a precedent for states being held accountable for the fallout of climate change. HRW

Researchers at Stanford University found that the number of Americans experiencing an “extreme smoke day” in a year has skyrocketed 27-fold over the past decade, as wildfires become more common and intense. An extreme smoke day is defined as a day when air quality becomes unhealthy for all age groups, due to smoke. The surge in wildfires and their pollution has eliminated virtually all the gains the U.S. 1970 Clean Air Act made in improving air quality by regulating industrial emissions.