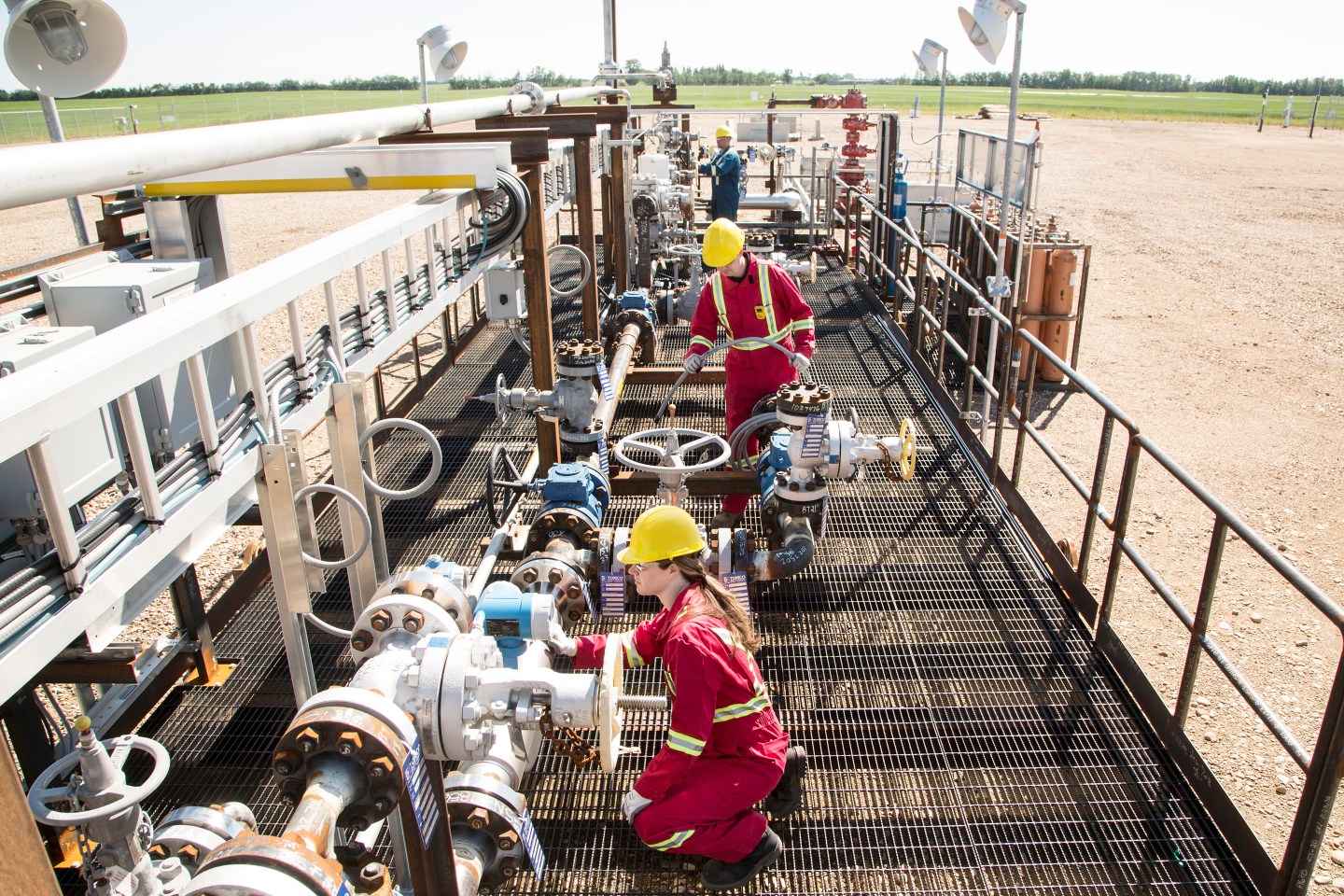 Shell operates the Quest CCS facility near Edmonton in Alberta, Canada, which a report by Global Witness claims has released more greenhouse gases than it has captured and stored. Shell says that is “simply wrong.”
Courtesy of Shell

Fossil fuel companies are leading the way when it comes to a climate change solution that, despite its backing from multiple governments, has faced criticism as an ineffective way to reach net zero.

Carbon capture and storage (CCS) allows industries that burn fossil fuels to trap carbon emissions and transport them via pipelines, trucks, or ships for geological storage. The carbon dioxide is injected underground into rock formations, usually at depths of one kilometer or more.

Shell, BP,ConocoPhillips, and Exxon Mobil have all been working on the technology, which Exxon Mobil estimates will be a $4 trillion market by 2050.

As the leader of the pack when it comes to CCS, Shell has been extensively developing the technology since 2008. It spent around $70 million on the technology in 2020 alone, making CCS an integral part of its expanding energy portfolio. The company has been promoting CCS as a key part of its sustainability efforts. Its Sustainability Report 2019 notes that the company is also exploring ways to utilize CO2 once it has been captured.

“These are crucial steps to help us achieve our ambition to reduce the Net Carbon Footprint of the energy products we sell by around half by 2050, in step with society’s drive to reduce greenhouse gas emissions as it moves towards the goals of the Paris Agreement,” the report states.

Governments are making big investments in CCS as part of their climate change strategies as well. In the U.S., the Department of Energy is taking the first steps to disburse more than $2.3 billion for carbon capture technology included in the bipartisan infrastructure law President Joe Biden signed last year. The U.K. has invested about $1.1 billion in the technology, making it a key part of its net-zero scheme. And the European Commission announced in July that it will invest $1.8 billion toward 17 large-scale cleantech projects, including CCS efforts, by 2030.

These investments come with an endorsement by the UN Intergovernmental Panel on Climate Change (IPCC): In a report published in April, the organization made clear that CCS is a critical decarbonization strategy in most mitigation pathways.

“Progressing towards net-zero GHG emissions from industry will be enabled by the adoption of new production processes using low and zero GHG electricity, hydrogen, fuels, and carbon management,” the report reads. “Until new chemistries are mastered, deep reduction of cement process emissions will rely on already commercialized cementitious material substitution and the availability of CCS.”

Besides a substantial reduction in fossil fuels, “use of CCS in the remaining fossil system” will be necessary to “achieve net-zero CO2 energy systems,” according to IPCC.

This is especially true given that after a temporary dip in carbon emissions during the early stages of the coronavirus pandemic as coal consumption and industrial output dipped, several reports have shown that CO2 has resumed its upwards trajectory, reaching 36.3 billion tonnes last year—the highest level in history.

While CCS might play a significant role in reaching 2030 and 2050 emission goals, many climate advocates question the motivations of the oil companies supporting it—especially in light of recently released documents by the House Oversight Committee that suggest executives at BP and Shell have privately downplayed public commitments on the climate crisis.

An internal BP memo highlighted how CCS could “enable the full use of fossil fuels across the energy transition and beyond," per the committee.

Shell began using carbon capture technology nearly a century ago, according to Syrie Crouch, vice president of CCS at Shell.

“Shell has been taking CO2 out of contaminated streams since the 1930s,” Crouch said. That was mainly to extract gas or oil with a high CO2 content, which had to be removed to meet technical specifications before both fossil fuels were sold and used, she explained. “But we have had the separation technology for that long.”

The corporation developed the first pipeline to move carbon dioxide in the 1970s, and it’s then that it began utilizing CO2 for enhanced oil recovery. Injecting CO2 into existing oil fields increases pressure and helps direct oil toward production wells.

In the intervening decades, Shell has stepped up research and investment in CCS. It operates the Quest CCS facility near Edmonton in Alberta, Canada, and is a partner with Chevron in the Gorgon CCS in Australia. Combined, those facilities have stored over 12 million tonnes of carbon to date, the equivalent to removing about 8% of the emissions from the EU’s entire aviation industry.

Shell is also part of the Northern Lights joint venture with Norwegian energy company Equinor and French company Total. The venture is the transport and storage component of Norway's CCS project—the first ever cross-border, open-source CO2 transport and storage infrastructure network. In September, Northern Lights signed a commercial agreement to transport up to 800,000 tonnes of carbon dioxide annually from Yara Sluiskil, an ammonia and fertilizer plant in the Netherlands, to a seabed off the coast of western Norway, setting a new standard for other industrial companies across Europe looking to use CCS technology.

Further, Shell plans to build at least 10 more plants across Canada, Europe, and the Asia Pacific.

“We are seeking to get access to an additional 25 million tonnes of CO2 per year of CCS capacity by 2035,” Crouch said. “The technology plays an essential role in achieving our climate ambitions.”

Those ambitions span a far-reaching set of goals: Shell has pledged to reduce its oil output and cut its carbon dioxide emissions in half by 2030, and it aims to be net zero by 2050. It also expects 50% of its total expenditures (cash capital expenditure and operating expenses) to be on low- and zero-carbon products and services by 2025, from hydrogen and biofuels to charging for electric vehicles, nature-based solutions, and CCS.

“CCS has the potential to reduce emissions where there are no currently scalable low-carbon alternatives,” Crouch said, “particularly within hard-to-abate sectors like cement, steel, iron, and chemicals.” For those industrial processes—which, as of today, are responsible for nearly a third of global CO2 emissions—“a range of CCS is required,” she added.

While governments and companies like Shell aim to deploy CCS at large scale, some believe the technology has its limits.

Among the 13 projects examined for the study—around 55% of the total current operational capacity worldwide—seven underperformed, two failed, and one was mothballed.

“Many international bodies and national governments are relying on carbon capture in the fossil fuel sector to get to net zero, and it simply won’t work,” said Bruce Robertson, the report’s author and an energy finance analyst at IEEFA. “Although [there is] some indication it might have a role to play in hard-to-abate sectors such as cement, fertilizers, and steel, overall results indicate a financial, technical, and emissions-reduction framework that continues to overstate and underperform.”

Dominic Eagleton, senior campaigner with the U.K.-based NGO Global Witness, shared a similar view. “Over the past 30 years, almost 80% of large-scale carbon capture facilities that were designed to reduce emissions have failed,” he said. “Carbon capture is a failing technology that is taking resources away from genuine climate solutions such as renewable power and energy efficiency.”

He pointed to a recent Global Witness study on Shell’s Quest plant in Alberta. It states that while 5 million tonnes of carbon dioxide had been prevented from escaping into the atmosphere at the plant since 2015, that same plant also released 7.5 million metric tonnes of greenhouse gases over the same period. Shell dismissed the findings as “simply wrong.”

“Because of their complicated infrastructure, most carbon capture systems simply do not capture the volume of carbon that they say they’re going to capture,” Eagleton said. “To that end, CCS doesn’t really offer a meaningful contribution to the 2050 climate targets.”

Eagleton believes renewable energy plants should be given priority instead. “Oil companies are promoting carbon capture because it allows them to carry on extracting, burning, and making profits from fossil fuels, while claiming this is somehow climate friendly,” he said, noting that a possible use for the CO2 that’s captured through CCS is to inject it into oil wells as a method of extracting more petroleum.

While he agreed that carbon capture and storage is necessary and critical to help decarbonize heavy industries, Al Armendariz, industrial initiative director for the Climate Imperative Foundation, a U.S.-based organization working within the climate policy space, also isn’t optimistic about the technology, citing concerns about its track record and high operating cost. A CCS plant usually requires more money than it earns.

"CCS isn’t the most promising technology, and it isn't the most cost effective way to reduce emissions,” he said. “It only provides a lifeline.”

Despite these concerns, government interest in CCS seems destined to grow. The recently enacted Inflation Reduction Act included $260 billion in clean energy tax credits and will steer tens of billions of dollars into CCS projects. Critics have criticized this aspect of the law, saying that the tax credits are essentially a giveaway to the fossil fuel industry.

“Governments are giving money to ideas like CCS to try to build the necessary political coalitions to move forward,” Armendariz said. “So rather than saying ‘We need to cut off any support connected to fossil fuels and move 100% of our public and private investment into zero-carbon renewable technologies,’ they have decided that it's politically more convenient to give a certain amount of that investment to the technologies that will allow them—us—to continue using fossil fuels.”

For Shell, CCS is just one aspect of the company’s efforts to participate in the ongoing energy transition—and Crouch says that it is a necessary one.

“'We are working with our customers to deliver lower carbon products and decarbonization options to their facilities,” she said. “CCS has to be part of the solution.”