The corner office is disappearing. In its place? Executive workspaces 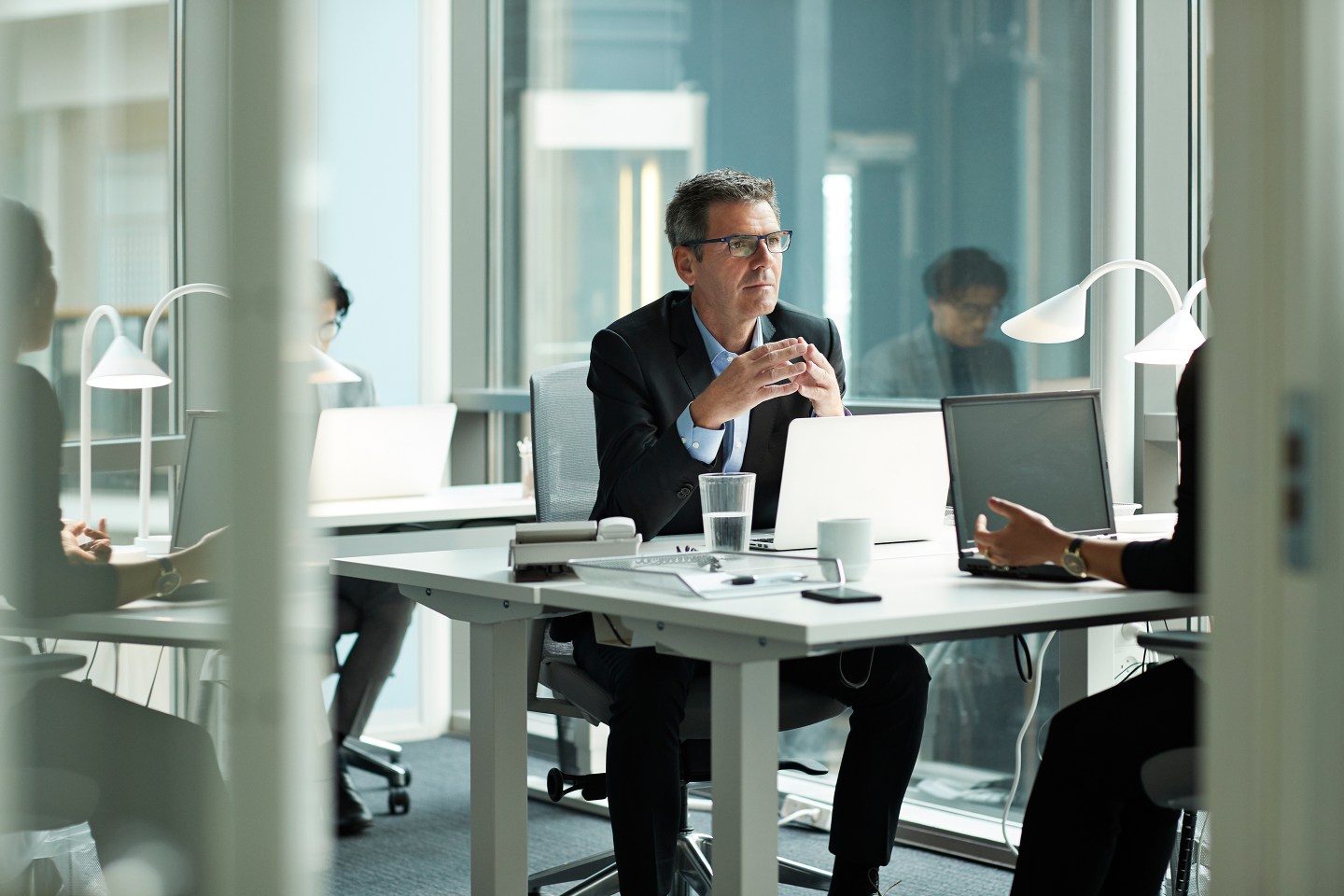 The corner office has long been a coveted C-suite status symbol, signaling the pinnacle of success. In recent years, notable executives like Mark Zuckerberg, Michael Bloomberg, and Reed Hastings, have abstained from private offices, preferring to sit among their employees on an open floor. The pandemic has accelerated this frame of thinking—but for different reasons. As companies cut down on real estate and reformat their office layout in an ode to the more collaborative, remote-first future of work, they’re also axing private offices for employees and executives alike.

That’s not to say executives won’t have their own workplace dwellings, but rather that companies are splitting the difference between privacy and flexibility. Executives will continue to have designated access to enclosed, well-designed spaces that offer solitude and room for confidential discussions. However, those spaces will no longer belong to them exclusively and will become available to other in-office workers when not in use.

Janet Pogue, a principal at the corporate design firm Gensler, says that the palatial corner offices of years past are disappearing as office real estate becomes increasingly versatile to serve a variety of functions, and as companies look to maximize every bit of the diminishing office footprint brought on by hybrid work.

In this new iteration of the office, executives will still get preferential access to a space. But that space will become communal when CEOs are traveling or working from home. It is, if not completely egalitarian, at least pragmatic. “These spaces do double and triple duty,” Pogue says.

Offices have become more flexible because they’ve become smaller. More than half (52%) of companies say they plan to contract the size of their offices, according to an April survey conducted by corporate architecture firm CBRE. That’s a nearly 10% increase from 2021 when only 44% of respondents said the same. The percentage surge is likely attributable to the fact that many companies have given up on returning to pre-pandemic levels of office occupancy. Instead, they’re focused on revitalizing their offices, tailoring them to support specific group activities that employees might not be able to perform remotely.

The reduction in headcount and, subsequently, space means that the real estate available for employees must be agile and multifunctional. Though only 17% of respondents in the CBRE survey say their flexible office space is “significant,”  51% expect that number to rise within two years. In essence, more companies plan to remodel their offices so the same space used for a marketing brainstorming session can be used for the engineering team’s marathon coding session.

The same framework applies to corner offices, which used to have the largest square footage of any designated office, including cubicles, but have become impractical as offices shrink. “There’s been this shift from designing for status to really designing for function and understanding what it is that somebody needs,” Pogue says.

And since it’s widely acknowledged—albeit with a few notable holdouts—that employees can do individual work remotely, what they need from an office is a place that fosters collaboration.

When Gensler remodeled LinkedIn’s Omaha offices in April, for example, it created shared “neighborhoods” for each team that included desks for solitary work, conference rooms for meetings, and lounges for socializing, according to Gensler principal Randy Howder. Executives sit within their respective neighborhoods and, like everyone else, have no fixed seat.

Still, leaders need private rooms to collaborate with other C-suite members and host sensitive discussions, ranging from earnings reports to potential mergers and acquisitions. To make sure they can do so with minimal disruption, LinkedIn executives can remove certain conference rooms from the company’s booking system. But the days of equating office size to clout are receding as companies become more geographically dispersed and the in-office manifestation of the corporate pecking order loses its significance.

“Hierarchy, in a more virtual [world], relates to influence in an organization, not an expression of physical space,” says Lenny Beaudoin, global head of workplace design at CBRE. “There are other things that matter more and that everyone sees inside of an organization, which are types of projects that people work on and the influence they have inside the company.”

Though office size isn’t as conflated with one’s value to an organization these days, other C-suite accouterments haven’t quite gone the way of the corner office. “Executives are still looking for some types of perks because they work a little bit differently…maybe there is some type of perk related to their title, like preferred parking or special dining spaces,” says Pogue.

There is, however, one C-suite status symbol that’s in especially high demand and viewed as the mother of all status symbols: flying private. “Personal use of a corporate aircraft tends to be the biggest status symbol,” says Michael Marino, managing director at FW Cook, an executive compensation consultancy. Corporate jet travel increased by 10% in 2021, compared to pre-pandemic levels.

But in the age of remote work, who needs a corner office when you can work from your second home? And if you can fly private to get there—well, that’s just the cherry on top.