In the shadow of Hurricane Fiona, Bad Bunny turned a music video into a documentary to save Puerto Rico 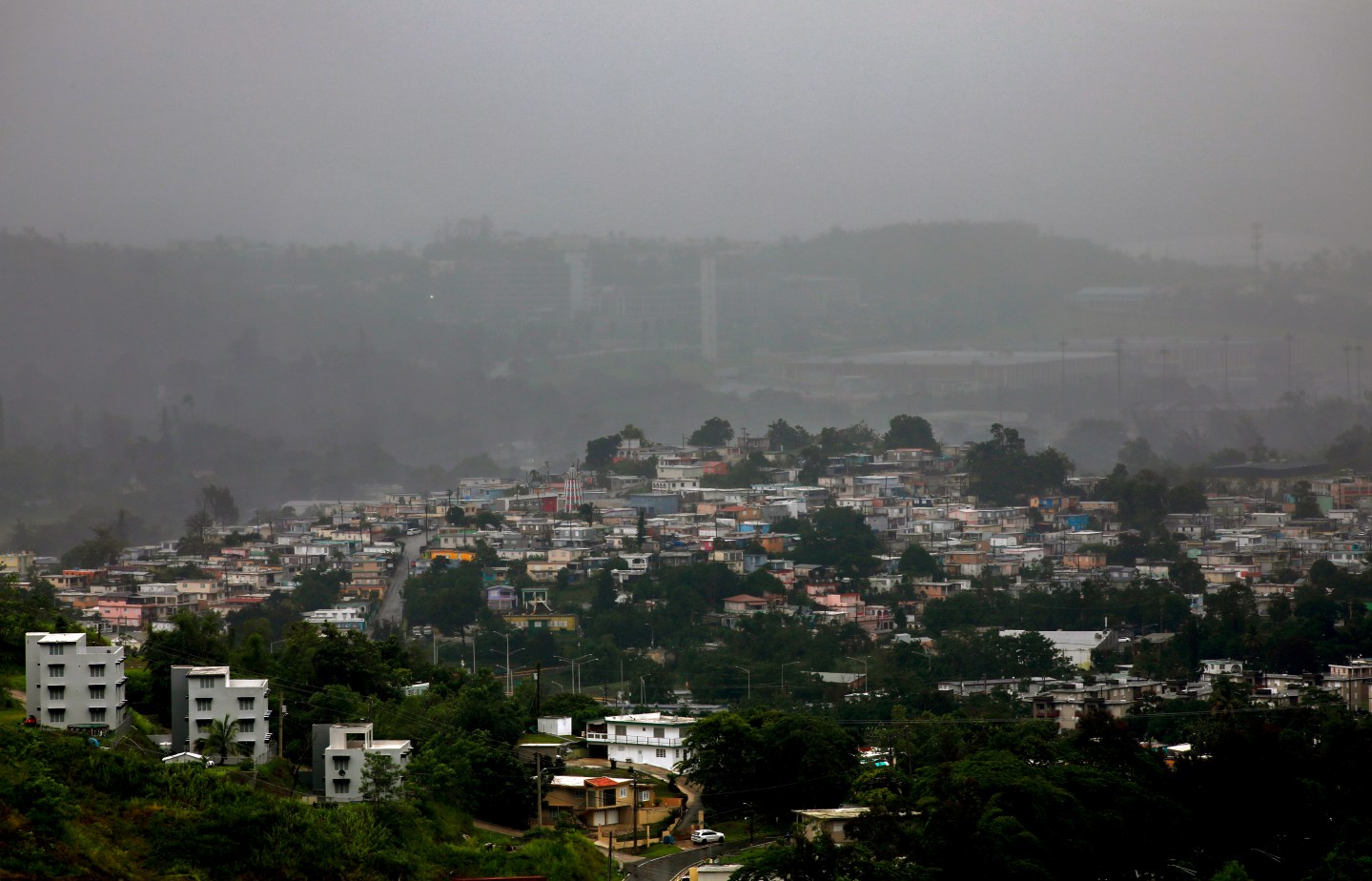 Rain falls on the town of Cayey, Puerto Rico, one day after Hurricane Fiona struck the island.
Jose Jimenez—Getty Images

Puerto Rico went dark just about the time the world was focused elsewhere, as the queen of another country was finally laid to rest. It quickly became a sore point for anyone who’d hoped for the kind of robust media coverage that typically accompanies a natural disaster close to home.

More than a million people who call Puerto Rico home lost power on Monday after Hurricane Fiona dropped 30 inches of rain on the island, causing floods, mudslides, and imperiling an already fragile infrastructure. Puerto Rico never fully recovered from Hurricane Maria or Irma, storms that hit the island just a few weeks apart in September 2017, killing thousands and causing the longest blackout ever experienced in the U.S., the second longest in the history of the illuminated world. But the territory was on the financial ropes before those storms made landfall, forced to file for bankruptcy protection in May 2017, the tragic result of bad-faith investments, Congressional inaction, and colonial mismanagement. The Trump administration’s failure to supply necessary aid after the storms further sealed their doom.

And now, they may never recover from Logan Paul. (That part was news to me, too.)

I’ve covered Puerto Rico in this newsletter over the years, but some of the best journalism I’ve seen on the issues facing the island has been produced by an independent journalist named Bianca Graulau, who was born and raised in Puerto Rico, and who studied broadcast journalism and political science at Syracuse University. Her platform of influence has been TikTok, where her dispatches in both Spanish and English have centered the Puerto Rican experience from a variety of perspectives, bringing their voices to audiences across the diaspora and beyond.

And then, she found an unusually sympathetic ear in the most famous pop star in the world.

Last Friday, Bad Bunny released the music video for his song, “El Apagón“—or literally, “The Blackout”—a political love letter to Puerto Rico from his fourth solo studio album, Un Verano Sin Ti, currently in its tenth week at number one on Billboard. “I hope people in PR can watch my video before the lights go out,” Bad Bunny posted on Instagram Stories on Friday.

Anyone who caught it enjoyed a banging few minutes of the song—fiercely interpreted by some of his fans in the streets—and then an abrupt shift to an 18-minute documentary by Graulau called Aquí Vive Gente, which explores the many intersecting crises facing Puerto Rico. Bad Bunny, a longtime advocate for Puerto Rico, found a journalism soul mate in Graulau, whose reporting includes the impacts of two pieces of legislation enacted by the Puerto Rican government that has led to evictions, razing of communities, widespread school closings, and the loss of public beach land, and designed to make way for wealthy real estate speculators and crypto bros.

I cannot recommend the short film highly enough. (It’s in Spanish, so use English subtitles to follow along.) Graulau is making good use of the signal boost she has been given and continues to report on the ground in the aftermath of Fiona.

“And thank you, Bad Bunny, for sharing your platform and supporting independent journalism.”

Why the lights went out in Puerto Rico Service was spotty before the storm hit. The Puerto Rico Electric Power Authority, the state-run agency responsible for power on the island, is currently in bankruptcy. A private consortium called Luma Energy, tapped to administer power in 2020, has failed to fix the grid, inspiring widespread protest, including a starring role in Bad Bunny’s El Apagón. Some $5 billion in Federal Emergency Management Agency funds have been set aside to help rebuild the energy grid but have been mired in red tape. And anyone paying attention saw it all coming. “Given all that, it shouldn’t be surprising that we are where we are,” Sergio Marxuach, policy director at the Center for a New Economy, a Puerto Rico-based think tank, told the Washington Post.
Washington Post

Massachusetts launches new “equity dashboards” that disaggregate economic data for workers by race and gender The Executive Office of Labor and Workforce Development says the new dashboards will break down income, employment, and other data by race and gender. “The need for these resources has been emphasized in the wake of the COVID-19 pandemic, particularly as the pandemic’s economic impact has been inconsistent across gender, race, and ethnicity,” says Rosalin Acosta, Mass., secretary of labor and workforce development. Among the tools are interactive maps and charts updated from numerous public sources.
Worcester Business Journal

Everyone can finally blame Favre Or, so it seems. An ugly scandal is brewing in Mississippi, in which text messages appear to show that former NFL star Brett Favre conspired with a nonprofit education leader to divert money earmarked for needy families to fund a volleyball stadium at the behest of Favre. Money was also given to Favre for public appearances he never kept. Nancy New, the former head of the nonprofit Mississippi Community Education Center has pled guilty to multiple charges as part of an agreement with the state; the former governor may be involved, and the state’s capital is still in the midst of a water crisis. A new class action suit aims to hold the city and Siemens Corp. to account.
Mississippi Free Press

Why white people get mad at Black mermaids, etc. Evelyn Carter, the president of the inclusion consultancy Paradigm, tackled the broader issues at play that drive people to rail against a Black Ariel in the Little Mermaid or insist that people of color are ruining the latest iteration of the Lord of The Rings. She identifies three reasons that are triggering to dominant culture viewers but boils it down simply: “White people are used to seeing themselves as the default so much that this default status goes undetected.” Combine that with the cultural preference for pretending race doesn’t exist (colorblindness), and the shock of a Black talking fish can feel like a loss of status. When it happens at work, like when leaders make equity-based adjustments to hiring, “HR then receives an influx of ‘reverse racism’ complaints including quotes like ‘it’s hard being a straight, White man these days.’” Yeah? Try being Asian in the Resistance sometime.
Paradigm blog

"America Never Deserved Puerto Rico" In the aftermath of Hurricane Maria, GQ’s Josh Rivera offered a poignant perspective on what it’s like to be a second-generation Nuyorican—a little too “gringo” to blend in when he went back to the island of family lore, a little too brown to be accepted here in “los Estados.” The tension is deeply personal. “This is a nation where people are enraged at the very sound of a language that isn't English, where even the temerity to even look like you might utter a word of Spanish in a white person’s presence makes you a target. It does not matter if you are a citizen or not,” he says.
GQ

The demand for low-wage workers created a shared Latinx immigrant identity This fascinating piece from JSTOR explores the experiences of immigrant laborers starting from the mid-twentieth century and finds that the shared common experience of bigotry forged a necessary alliance most often between Mexican and Puerto Rican workers. The piece surfaces the work of historian Lilia Fernández, who found that discrimination persisted even when the U.S. government was responsible for importing the workers to begin with. “U.S. imperialism, modernization and industrialization campaigns, agricultural displacement, environmental catastrophe, and government policies made Mexico and Puerto Rico ripe candidates for exporting workers,” she says.
JSTOR Daily

— Bad Bunny, pausing his European tour in 2019 to join public protests against then Governor Ricardo Rosselló.