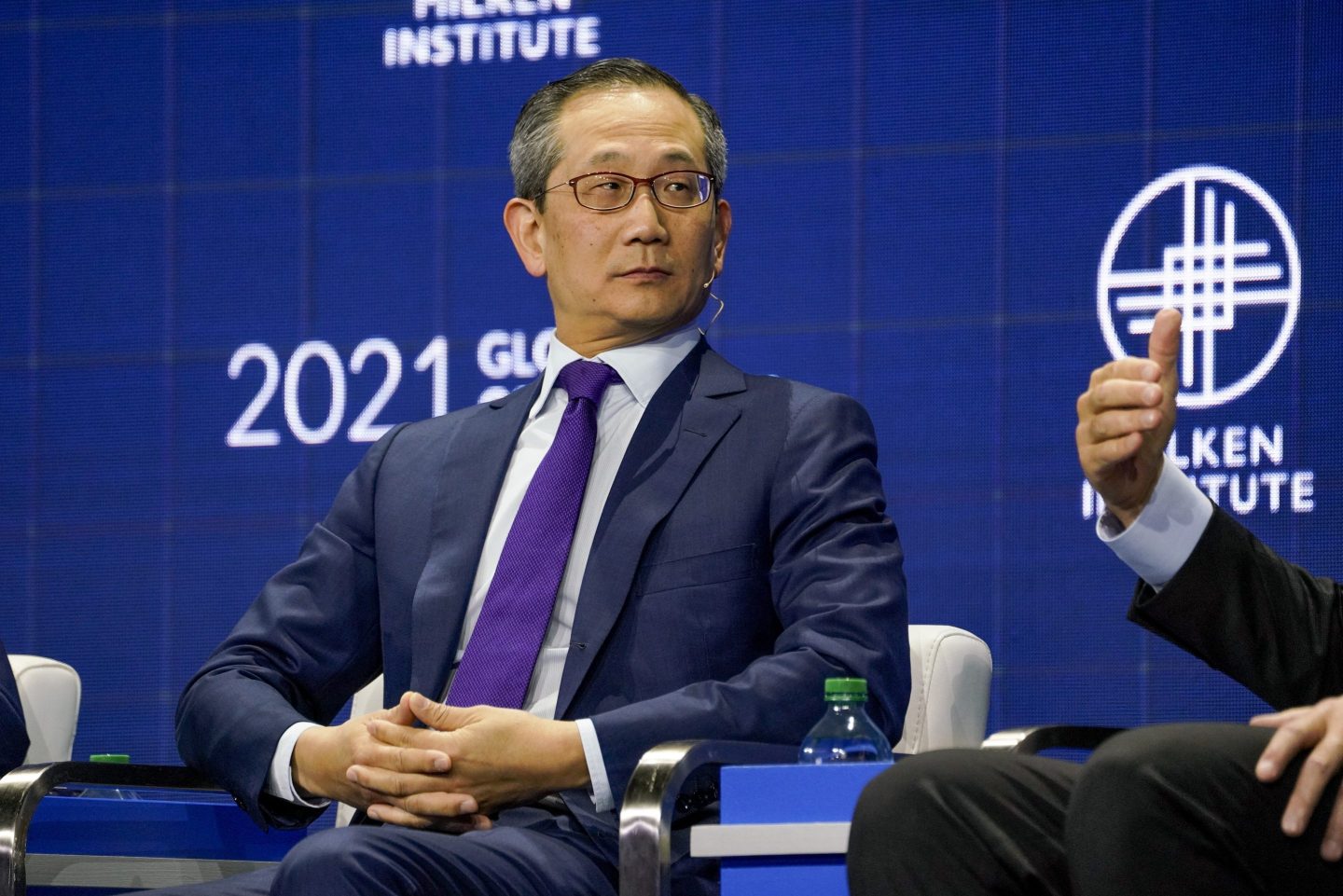 Kewsong Lee stepped down as CEO of the Carlyle Group in August.
Kyle Grillot—Bloomberg/Getty Images

Less surprising was the announcement just days later that the company’s global head of investor relations, Nathan Urquhart, would leave at the end of the year to join hedge fund Coatue Management. The timing may be a coincidence, but research shows that when CEOs leave, there are ripple effects throughout the leadership ranks. One need look no further than Goldman Sachs, where an unusually high number of partners have resigned since current CEO David Solomon took over.

The threat of C-suite exits creates extra pressure for a corporate board: Not only must directors appoint a new or interim CEO, they also need to retain as many key executives as possible to make the transition seamless. Today, that job is complicated by a widespread, pandemic-era feeling that one’s time is too valuable to waste in a chaotic or toxic environment, and if an executive is lucky enough to have a walk-away fund, it’s better to leave. Lee apparently expressed as much before he quit. “Life’s too short,” he said when he learned that the cofounders of the Carlyle Group, who are board members, were planning to take more control of the company’s affairs, unnamed sources told the New York Times.

With CEO resignations returning to pre-pandemic levels, boards ought to remember that sentiment. Now more than ever, monetary incentives to retain the C-suite will have their limits, and boards will have to engage more deeply with their executives. “What makes things sticky for people is the sense of meaning, purpose, and really understanding one’s own contribution and place in the organization,” says Ana Perea, who runs an eponymous consulting company and is a principal at the Boswell Group. “If you can see a compelling version of that for yourself under new leadership, that to me is the best indicator of somebody not only staying, but digging their hands into the clay and being about the new project.”

Some CEOs quit; others get replaced

Several factors have precipitated the rise in CEO resignations this year, punctuating the importance of succession plans. Some 832 chief executives in the U.S. have left their jobs to date, only slightly fewer than the 850 who exited during the same period in 2019, according to data from outplacement firm Challenger, Gray, & Christmas. That year, total departures reached 1,640.

The shrinking of CEO tenures isn’t a new phenomenon, but when lockdowns began and corporate America was thrown into disarray, companies “froze in place,” says David Lange, a managing director at Russell Reynolds Associates. In many cases, CEOs were offered bonuses to extend their terms. With the pandemic waning, chief executives have returned to their usual behavior, jumping to a new company after as little as five years.

Their eagerness to explore new executive terrain isn’t all too surprising. The pandemic forced CEOs—many of whom went into the job as sophic leaders or visionaries—to take on more operational drudge. “It was really about shoring up operations, guaranteeing headcount, creating benefits packages, converting to hybrid,” says Lange. “A lot of CEOs were acting a little bit against type.” As business rebounded in 2021, CEOs could finally wash their hands of their companies guilt-free.

To be sure, CEO ousters also play a role in the higher turnover rate for this cohort, with a greater share pushed out for suboptimal performance. This distinction matters because the impetus behind a CEO’s departure will likely affect the size and swiftness of subsequent exits by top leaders. A planned retirement that leads to the crowning of an internal candidate, one unanimously recognized as the rightful next leader, is unlikely to create much additional unrest in the C-suite. But that scenario is exceedingly rare, experts say.

Impromptu departures, which are more typical, leave boards scrambling to put in place a succession plan, as evidenced at the Carlyle Group and Starbucks in March.

Even when boards claim to have a succession road map, what they actually mean is they can identify nine to 15 people who could step into the CEO role one day, says Lange. But they aren’t deeply familiar with those candidates’ strengths and weaknesses, and they certainly haven’t done enough due diligence to be comfortable appointing any one person CEO.

Hiring an executive search firm to conduct an external search is a common board practice, but it’s a gamble. On one hand, the appointment of an outsider might encourage leaders who are curious about the new direction of the company and their place in it to stay, as well as those who would have left if a former peer became their boss, which can be an ego-bruising experience.

On the other hand, recruiting outside the firm may offend internal candidates with corner office ambitions. About one-third of executives who are part of a CEO “tournament” within a firm leave the company if they don’t get the promotion, a recent study from the University of Texas at Austin found. Moreover, research shows that senior executives worry about their job security when an outsider is appointed. That’s only natural, says Perea. Externally sourced CEOs often want to bring in handpicked loyalists from previous jobs; sitting C-suite executives may choose to leave while the choice remains theirs.

But sweeping statements and statistics don’t capture all the complexities of the CEO transition. Consider, for example, that the personality of departing CEOs can also influence the C-suite’s reaction to the change.

Lange’s firm divides leadership styles into two camps: the top-down “heroic and galvanizing” leaders who take charge versus the more collaborative types who don’t mind showing vulnerability. The latter archetype—a leader who builds trust, provides emotional support, and connects with colleagues at a human level—is more likely to inspire loyalty from executives, who might even follow them to a new organization, compared with the CEO who is only results-focused. But Lange notes that during the pandemic, boards saw that companies need leaders who can do both.

By the same token, newly appointed CEOs who demonstrate that they care about their team and are willing to preserve positive aspects of the existing company culture are typically more successful at keeping the C-suite intact, Perea says.

It takes time for incoming CEOs to win over a new team. This is where money, whether cash or equity awards with delayed vesting, can make a difference—but only to a degree.

Marco Pizzitola, a consultant at FW Cook, recently led research investigating the effects of retention grants. Looking at 65 large-cap U.S. companies between 2010 and 2016, he and colleagues Joe Sorrentino and Stephan Bosshard, found that bonuses kept C-suite officers around for an average of two years, after which attrition picked up. Bonuses at Fortune 500 firms were generous, ranging from $1 million to $4 million, he says. Still, after $2 million, “you’re really not getting much return for your money.”

A couple of years is not a long time in today’s corporate landscape, especially after a changing of the CEO guard. However, the two years of stability that grants buy boards and new CEOs can be enough time if used wisely, Pizzitola says.

Financial incentives also give CEOs time to gauge whether current members of the C-suite belong on the post-succession leadership team. If so, CEOs will have to assess whether their C-suite’s compensation plan is sufficient to keep them once their bonus is vested, and if someone is a flight risk, determine what other intangibles—like additional responsibilities or a new title—might be attractive. Conversely, CEOs might find it’s time to start an external search or scout new leaders internally.

Demand for internal succession planning has risen, says Lange, whose daily work at Russell Reynolds involves developing leaders for the CEO job through a formal program that aids with retention as a side benefit. If possible, he says, boards should identify a few contenders two or three years ahead of a CEO’s end-of-term, and be transparent about these selections. Such openness keeps executives from responding to calls from headhunters because they have a shot at “the big chair,” he says.

Executives of interest should also be informed of who else is being considered and prepped for the CEO role. “They’ll think, ‘If I don’t make it, I understand that,’” he explains, but they’ll appreciate the investment in their careers and exposure to the board, investors, and markets.

By contrast, when boards are not transparent—when they haven’t given employees a clear definition of what it takes to be CEO or provided a road map and metrics—some leaders might falsely assume they’re ready to move up. When they’re not selected, and unsure why, they’re more likely to feel jilted.

Think holistically and have honest conversations

Similarly, Perea’s core advice for retaining C-suite leaders is to set the stage long before a CEO departs. “I find once we’re getting into retention conversations, we’re often too late,” she says. “Let’s think about your most talented CFO. What’s been done to engage, and listen to, and involve that CFO throughout their time under this CEO’s leadership, so that you’re pretty aware of how they’re doing when the CEO is leaving, and you’re aware of how they’re going to fit into a future iteration of the business under new leadership.” When a board is doing its job effectively, it eliminates big shocks and mad dashes to fill the top role.

After a chief executive’s exit, the board and incoming CEO should be prepared to hold a “richer conversation” with the C-suite, one that allows executives to make self-aware, honest, and well-considered decisions about their future. “People have to find a new or renewed sense of purpose and meaning,” Perea says. “Sometimes that means letting go of what they had under the previous CEO. Sometimes it means a palpable, visible shift in responsibilities or scope.”

But sometimes it means leaving, and that is healthy, too.