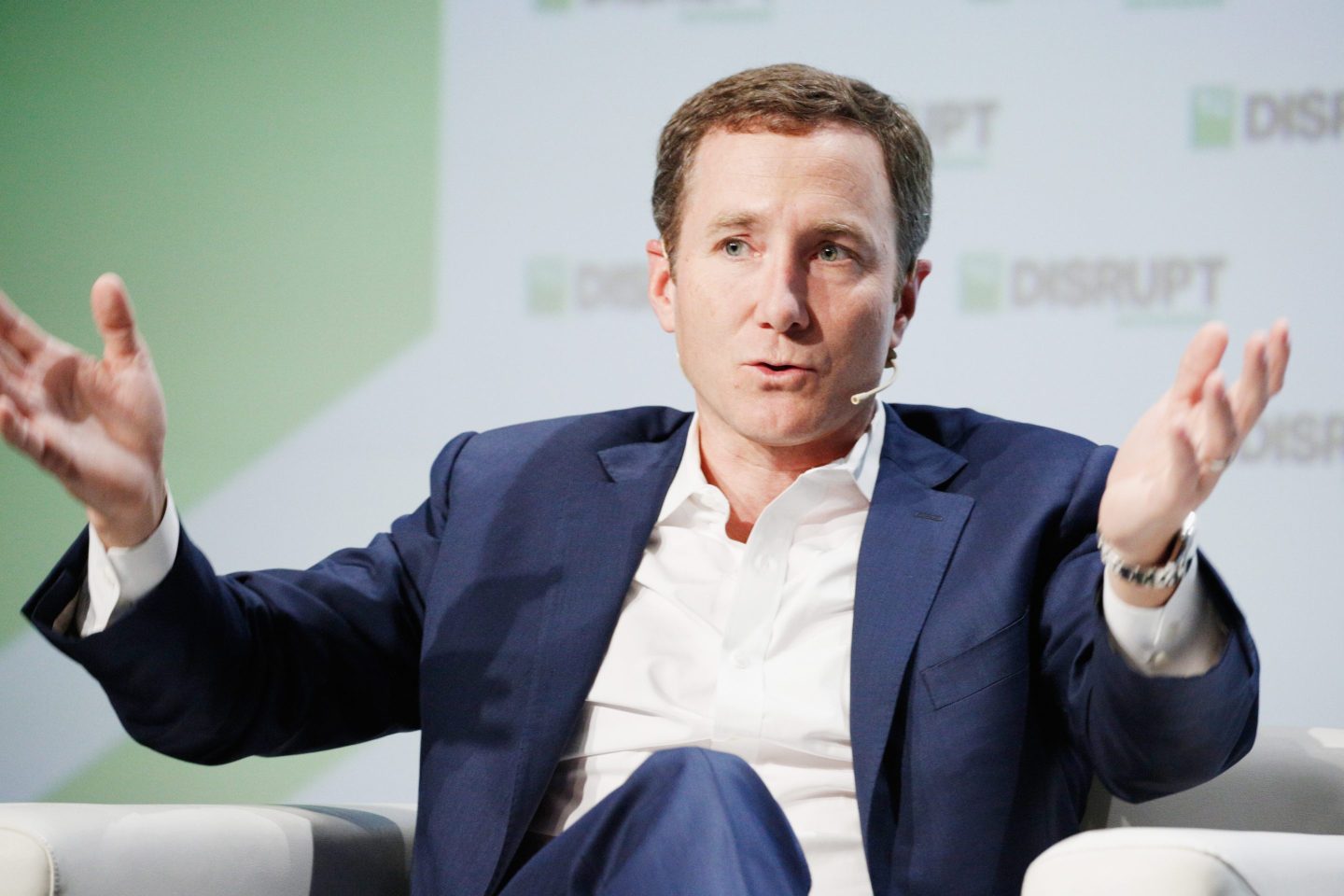 Earlier this week, Peloton’s John Foley joined a growing list of founders who have now departed or are in the process of disengaging from the companies they built. In most cases, the leaders have been nudged out the door by the board and investors. Foley’s dismissal was more of a swift kick.

The Peloton founder stepped down as CEO in February, after failing to manage the at-home fitness equipment company, once a pandemic darling, through supply-chain woes and plunging demand, among other missteps. Like many outgoing CEOs, he retained the executive chair role; he’s now out as chair, too. His cofounder Hisao Kushi, the company’s former chief legal officer, also resigned this week.

Karen Boone, former Restoration Hardware CFO and lead independent director at Peloton, is replacing Foley to lead the board.

The shake-up is a positive sign for investors, says Jason Schloetzer, associate professor of business administration at Georgetown University’s McDonough School of Business. When founders finally resign, typically after holding the executive chair for a stint, the C-suite team and board gain maneuvering room. Yes, Foley has charted the company’s course since 2013, when he launched the brand through a Kickstarter campaign. But, like many founder-CEOs, he apparently didn’t have the right skill set to run a public company, which requires a different aptitude from starting one.

“When founders stick around for a long time, it can cause problems for incoming management because they might want to undo some things that the founder has done,” says Schloetzer. That’s hard to do when the former leader is looking over the CEO’s shoulder, or if the C-suite fears that some of what it’s undoing will cause the founder to lose face, or lead to awkward conversations at the next board meeting.

Conflict between incoming CEOs and founders can cause serious turmoil. It can also leave an executive team torn, wondering whether its allegiance should be to the new CEO or the original visionary, the one who built the company from the ground up. At Peloton, the air is clearer now as the company looks to the future. And the CEO and board likely see this moment as an opportunity for Peloton to “make some transformative change,” Schloetzer says.

That’s what investors are hoping for. Peloton shares hovered at nearly $11 as of publication, down from approximately $35 per share in January. The stock reached an all-time high of $167 per share during the pandemic. Peloton’s new CEO, Barry McCarthy, has cut staff, slashed inventory, and outsourced production since his February takeover—all of which has, to quote him, merely “stopped the bleeding.”

Foley arguably should have been replaced sooner. But the timing of his ousting coincidentally aligns with the ideal departure date of a founder-CEO, according to a trio of academics at the University of North Carolina and University of California, Irvine. Last year, they discovered that the value of a founder’s presence is associated with a 10% premium at IPO. That figure typically sinks to zero about three years after firms go public.

At that point, most founder-leaders are associated with a decrease in a company’s long-term value, usually because they don’t have the requisite skill set to run a public company. Exceptions like Jeff Bezos at Amazon and Bill Gates at Microsoft are rare, the researchers determined.

Should founder-CEOs who are on their way out of a firm become executive chairs—the person to whom the incoming CEO theoretically reports?

Georgetown professor Jason Schloetzer, who has been studying CEO succession for a decade, says he’s not sure why this pattern has become the norm.

There’s value in having the incumbent CEO stick around in some capacity, he says. They have institutional knowledge, plus, it’s only natural that boards will want to show deference to a founder. But it’s not clear why departing CEOs aren’t appointed as board members, rather than chairs, or why they’re so often assigned to the board at all. Why aren’t more founders offered adviser contracts instead?

“We are directing all the value created by the company to specific conservation projects and advocacy. Instead of exploiting natural resources to make shareholder returns, we are turning shareholder capitalism on its head by making the Earth our only shareholder.”

—Charles Conn, chair of Patagonia, in an op-ed for Fortune about the founder’s decision to give the company away to help fight climate change

👓 Read: Bret Taylor, chair of the board at Twitter, is keeping a low profile as he steers the board through Elon Musk–related deal drama. Taylor, the co-CEO of Salesforce, isn’t speaking to the press about Twitter, so Bloomberg reporters talked to 17 of his associates and friends to create this portrait of the diplomatic, mild-mannered executive.

🎧 Listen: Kathryne Reeves, chief marketing officer at Illumina, discusses the pressure she faced to make quick, drastic changes at the fast-growing genome sequencing company in this episode of The CMO Podcast.

📖 Bookmark: Members of the LGBTQ+ community hold only 0.5% of board seats in the Fortune 500. That’s according to a comprehensive new report about gaps in board diversity from Diligent Institute, the research arm of corporate governance software maker Diligent (sponsor of this newsletter). Another surprising statistic: Of the 228 private company boards it studied, 58% have all-male boards, far more than the 6% found at publicly traded companies.

GE announced the names of eight executives it plans to appoint to the board of GE HealthCare, a planned independent GE spinoff. That list includes Lloyd Howell, CFO of Booz Allen; Risa Lavizzo-Mourey, former professor of health policy at the University of Pennsylvania and former CEO of the Robert Wood Johnson Foundation; and Tomislav Mihaljevic, CEO of the Cleveland Clinic.

Elsewhere, Joe DeSplinter, a director at ReMax, is resigning from the board at the end of his term in 2023. Bank of America tapped José Almeida, chairman and CEO of Baxter International, a health care products company, to join its board. Guillermo Díaz, chair of the Hispanic Technology Executive Council, is joining the board of fast-food chain Jack in the Box. Michelle Frymire, former CEO of travel management company CWT, is now a director at Sonder, the short-term accommodation provider.

How I Made it to the Boardroom

Sophia Ononye-Onyia runs her own New York–based science communications consulting company, hosts and produces a popular podcast about scientific innovation, and is a director at Daré Biosciences, a San Diego–based pharmaceutical company focused on women’s health. I asked Ononye-Onyia, who holds an MBA in health care management and a Ph.D. in pharmaceutical sciences, about her experience joining a corporate board.

This interview has been edited for space and clarity.

Fortune: How did you get your first board seat?

Sophia Ononye-Onyia: Like most people who get board positions, I was recruited. One of the board members at Daré, the head of the nom/gov committee, learned that Yale had entrepreneurs in residence, and she checked it out. I was listed. This is where diversity comes in because Daré’s board understands the importance of diversity, and I was the only Black woman on the site. The director found that I was a breast cancer researcher at Yale, which is how I got that entrepreneurship position. I’m a former Pfizer scientist, and I own my own consultancy. I had also been recognized by Commetric, a media analytics group, as being the No. 1 influencer in the women’s health space. Prior to Daré, I was president and chair of the New York chapter of the nonprofit Healthcare Businesswomen’s Association. So, there was a women’s health company looking for a new board member and thinking it’d be great if that person was a woman of color; somehow they found me.

What surprised you about the board experience?

I was surprised most by how receptive people were to what I was thinking. I credit that to the chairman of the board. I think he does a very good job of making sure we have executive sessions at the end of each meeting. He will go through every single board director, asking, “What do you think?” I would encourage everyone who is thinking of joining a board to do their own due diligence to make sure the chemistry is right.

What do you tell friends who ask: How do you join a corporate board?

Boards tend to recruit from networks of people they know. If you’re a minority, you’re not going to have a lot of representation, especially in senior positions. That’s why I’m a big proponent of the NACD’s [National Association of Certified Directors] certification program. Even with my degrees, without the certification, there’s an inclination to think, “Who does she know?” So I tell people who want to be on boards: set up all the pieces, get the degrees, the right training. You never know when your name will be called, and you’ll be ready for it.

- The death of Bed Bath & Beyond’s CFO is a wake-up call for boards about mental health in the C-suite.

- New federal data reveals that more than three times as many people worked remotely in 2021 compared with 2019.

- A new poll shows that treating workers properly is the one ESG issue Americans can agree on.

Pity the board overseeing a company whose CEO has an Elizabeth Holmes vibe. That was true of Trevor Milton, the founder and former CEO of electric truck company Nikola, according to a Bloomberg feature. (Milton is currently facing criminal and civil lawsuits for securities and wire fraud.) The story opens with an unbelievable scene in which Bob Simpson, an engineer who would later become a whistleblower, is asked to plug in a prototype truck during a presentation to investors.

“Bob Simpson crouched and waited for his cue. When the silk sheet finally slipped off the truck, the engineer scurried behind the curtains, crawled underneath the stage, and plugged in the power cord. The Nikola One prototype, a colossal red-white-and-blue semitruck, lit up, prompting hundreds of investors to clink their Champagne glasses and take videos with their phones. ‘Oh, that thing is so awesome,’ said Trevor Milton, Nikola’s chief executive officer, with the controlled energy of a youth pastor. As he paced back and forth on stage at Nikola Corp.’s Salt Lake City headquarters, rubbing his hands, he almost did sound like he was pushing a new religion. ‘We’ve been waiting so long to show this to the world,’ he said. ‘You have no idea. It’s hard to even contain.’

Simpson and his business partner had been contracted as engineers to design and build the prototype’s electric drivetrain. Simpson was excited to be working on a vehicle that had long been considered a clean energy white whale by investors, environmentalists, and the industry as a whole: a mass-produced hydrogen-electric hybrid freight hauler that would have far more range than a Tesla and could be refueled in about the same amount of time as an internal combustion model.

But he soon realized the job wouldn’t be nearly as thrilling as he’d imagined.”

Read the full piece here, and may you find time to unplug this weekend.