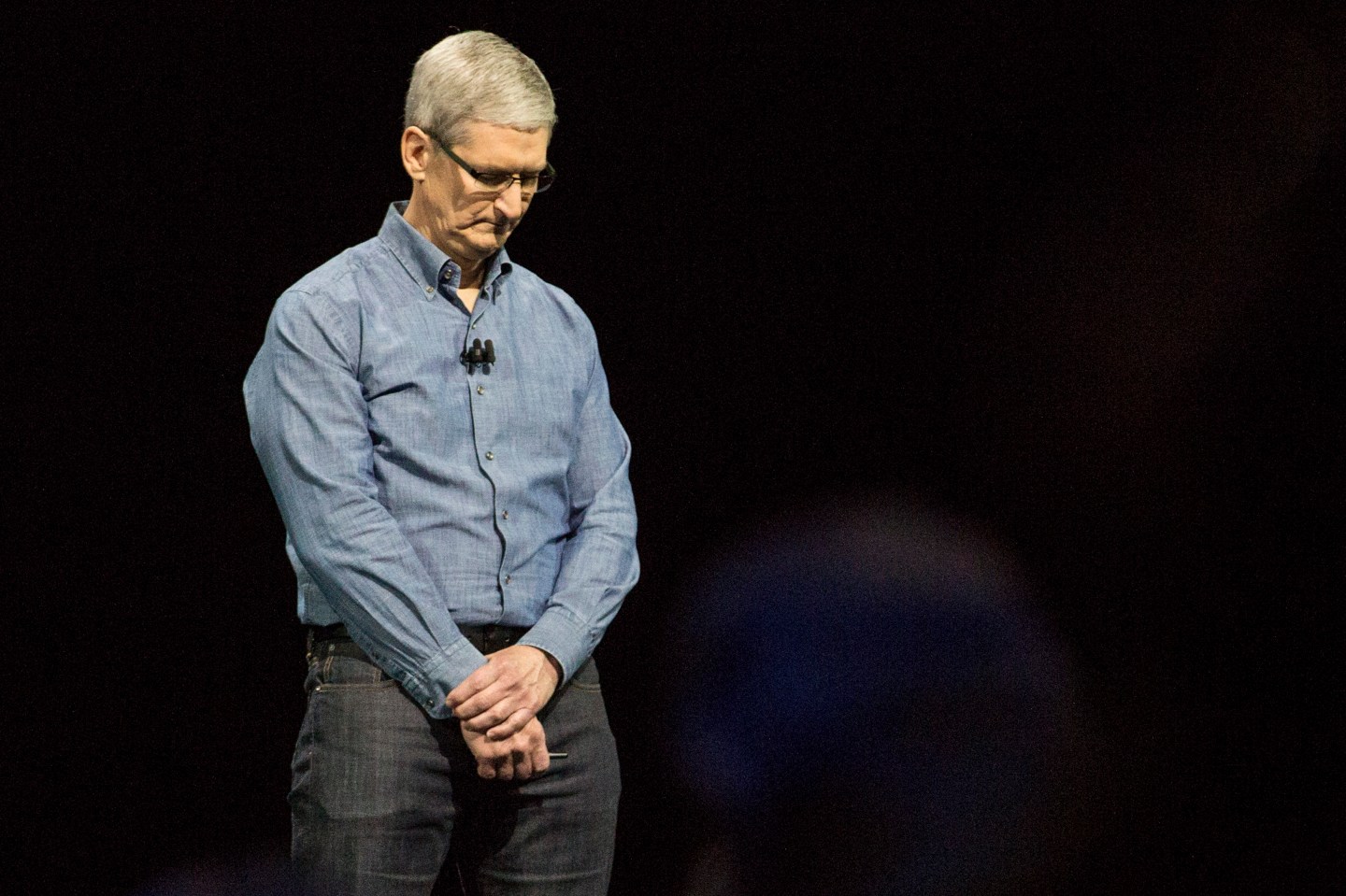 Hours before reminiscing about Steve Jobs at a tech conference on Wednesday evening, Apple CEO Tim Cook presided over a decidedly un-Jobs-ian unveiling of an updated iPhone.

The 14th version of Apple’s signature smartphone, set to arrive in mid-September through early October, doesn’t feature any of the monumental leaps in which Jobs delighted.

Sure, there are several notable updates, including higher-performing cameras, better battery life, and a more-powerful processor on the higher-cost Pro model. But prevailing wisdom (including that of Jobs’ daughter) suggests that the perpetual update cycle and deeply ingrained buying habits, rather than excitement about technological advances, will drive tens of billions of dollars in new iPhone sales.

Instead, the iPhone 14 garnered more headlines for something which Jobs considered secondary to the product: price. Despite inflationary pressures and climbing supplier costs, Apple opted against charging more for the latest version of its smartphone in the U.S. and China, its two largest markets. (Apple hiked iPhone 14 prices in parts of Europe and Japan, where currency values have deflated in recent months, among other locations.)

While the focus on price surely wouldn’t have thrilled Jobs, it reflects the realities of Apple’s current state of operations. Under Cook, less of a tech visionary and more a businessman than Jobs, the balance of Apple’s consumer electronics attention has shifted a bit toward quantity over quality.

Some of this adjustment reflects the technological limitations of our smartphones, which feel like they’ve reached near-peak performance. The iPhone already processes at high speeds, takes remarkably clear pictures, offers copious amounts of storage, and fits beautifully in your hand. In recent years, the biggest jumps in the iPhone’s utility derived from the software, not the hardware, side of Apple’s operations.

But a sizable portion of the company’s repositioning centers on Cook’s vision for an extensive Apple ecosystem, one where consumers own several pieces of interconnected hardware (smartphone, personal computer, tablet, watch, headphones). If Apple customers get locked into multiple devices, the thinking goes, they’ll have a harder time switching to Samsung or Google products. (Wall Street and tech wonks call this a “moat.”)

The strategy not only boosts hardware sales, but gets more customers to buy into Apple’s services products—an iPhone user is more likely to download apps from the App Store, use Apple’s credit card, or subscribe to the company’s music streaming service. While Apple’s services account for 19% of total revenue, their profit margins are double that of hardware products.

These realities were clearly seen in Apple’s approach to its latest product line.

By holding steady on the iPhone’s price, Cook and company will earn another serving of loyalty from customers—not that they needed much more—and keep more of them within the Apple ecosystem. As Wedbush Securities analyst Dan Ives noted, Apple’s adoption of internally designed iPhone chips allows the company to better absorb any profit margin shrinkage.

Meanwhile, Apple can focus on other products that expand its moat. The latest iterations of the Apple Watch and AirPods, for example, included notable improvements that could bring in additional customers.

The Apple Watch Ultra marks the company’s most ambitious attempt to win over the outdoorsy crowd, which has gravitated to Garmin’s wearables. The base Apple Watch SE also got a makeover that boosts processing speed by 20% and incorporates car crash detection technology, advances that should help fend off competition from the imminently arriving Google Pixel Watch.

The newest line of AirPods Pro includes better noise-cancellation technology and features that make the small buds easier to find, important developments in a wireless headphones market that, according to Counterpoint Research, grew 25% in 2021.

After the product launch, when Cook was onstage at the Code Conference on Wednesday evening, the CEO alluded to Steve Jobs’ dedication to product quality over quantity: “He always said Apple should make the best products, not the most.”

Cook, however, keeps trying to have it both ways. He’s mostly succeeded so far, evidenced by Apple’s record-breaking revenue of $366 billion last year and customers’ iron-clad allegiance. The Apple Watch and AirPods, two new categories of products that were introduced during Cook’s tenure, have helped Apple deepen its moat.

But another year of merely iterative iPhone updates makes the balancing act just a tad harder. At some point, Apple will need to land another technological leap that would make Jobs beam with joy. The iPhone 14 sure ain’t it.

Elon’s got some company. Disney executives were concerned about the prevalence of bots on Twitter’s platform when the entertainment giant examined whether to acquire the social media company back in 2016, former Disney CEO Bob Iger said Wednesday. The comments may offer some ammunition to Elon Musk, who is trying to back out of his planned $44 billion acquisition of Twitter largely because he believes Twitter executives have misled the public about the number of bots on the site. Twitter officials have said they conduct regular tests to estimate bot numbers, though the company’s former head of security recently alleged those efforts are insufficient.

Back on track. Production at Tesla’s Shanghai plant ramped up again in August following upgrades to its assembly lines, allowing the electric-auto maker to top recent output totals, the Wall Street Journal reported. Tesla’s Chinese manufacturing hub delivered nearly 77,000 vehicles last month, better than its monthly average of 61,000 vehicles in the first three months of the year. The Shanghai facility was hampered in April owing to COVID-related lockdowns and ran at partial capacity in July as workers completed the upgrades.

Needing that new SOS technology. Apple’s primary data center operator in China warned of a “dire situation” at its facilities in the city of Guiyang, a tech hub struggling to stay online amid COVID lockdowns imposed by the republic’s government, Bloomberg reported. In a WeChat notice reviewed by Bloomberg, the state-backed firm Guizhou Cloud Big Data, said employees haven’t been allowed to leave company property for about a week owing to the restrictions. Guizhou’s server center in Guiyang keeps all data from China’s hundreds of millions of iPhone owners. Company officials haven’t said whether the lockdown has impacted data storage.

A legal whirlwind. Several Tornado Cash users sued the Treasury Department and some of its leaders Thursday, arguing that federal officials overstepped their legal authority when they effectively banned the cryptocurrency service. The lawsuit follows the Treasury Department’s decision last month to sanction Tornado Cash on the grounds that the service, which allows users to exchange and withdraw different cryptocurrencies, has been used to facilitate money laundering and other illegal activities. The plaintiffs, who are backed by crypto exchange Coinbase, argue Tornado Cash is an open-source software code that isn’t subject to federal sanctions.

I don’t approve this message. The preelection deluge of political ads is coming to streaming. Protocol reported Thursday that campaigns are increasingly shifting their ad spends from linear television to streaming services, a long-anticipated development finally gaining steam ahead of November’s midterms. Several streaming executives, including those behind Paramount+ and Peacock, have said they’re banking on political ads to pad their bottom lines. The spots would help offset the enormous costs of building content libraries and marketing platforms, expenses that make streaming unprofitable for nearly all companies.

Campaigns from both sides of the aisle are expected to spend $1.2 billion on streaming ads this midterm season, according to recent estimates from analytics company Kantar. “Connected TV is really the big story in political advertising this year,” said Grace Briscoe, SVP of client development at Basis Technologies, a Los Angeles–based ad and marketing software company. “Every campaign we’re working with, up and down the ballot, even small state legislative races [and] mayoral races, they’re all looking to explore connected TV.”

That’s a welcome reprieve for the streaming industry, which has seen spending on ads slow down due to supply chain shortages, late-pandemic uncertainties, and inflation woes.

United doubles down in its bet on flying taxis with $15 million order for Jetsons-like 4-seaters, by Chris Morris

‘Glaring deficiencies’: Judge slams Elon Musk for failing to hand over texts about Twitter buy, by Jef Feeley and Bloomberg

‘How to be a HOT GIRL on the internet’: A Google-sponsored influencer says it’s avoiding misinformation, according to a TikTok ad with 30 million views, by Alena Botros

How Germany’s regulators beat the SEC in the race for crypto regulation—and convinced me to establish my business there, by Philipp Pieper

Here’s why A.I. chatbots might have more empathy than your manager, by Michelle Zhou

Not quite a battle royale. Tensions between video game giants Microsoft and Sony over Call of Duty’s future are rising—though the two rivals remain remarkably polite in their public barbs. PlayStation chief Jim Ryan issued a sharp but civil statement Thursday to GamesIndustry.biz, accusing Xbox head Phil Spencer of stretching the word “several” beyond its common definition. The disagreement stemmed from Spencer’s comments reported by The Verge last week, in which he said Microsoft offered to keep the Call of Duty franchise available on Sony’s PlayStation platform for “at least several more years” beyond its current agreement, which ends in 2024. Microsoft agreed in January to buy Call of Duty developer Activision Blizzard for $68.7 billion, pending regulatory approval. Ryan, however, said the proposal only included a three-year extension. “I hadn’t intended to comment on what I understood to be a private business discussion, but I feel the need to set the record straight because Phil Spencer brought this into the public forum,” Ryan wrote.