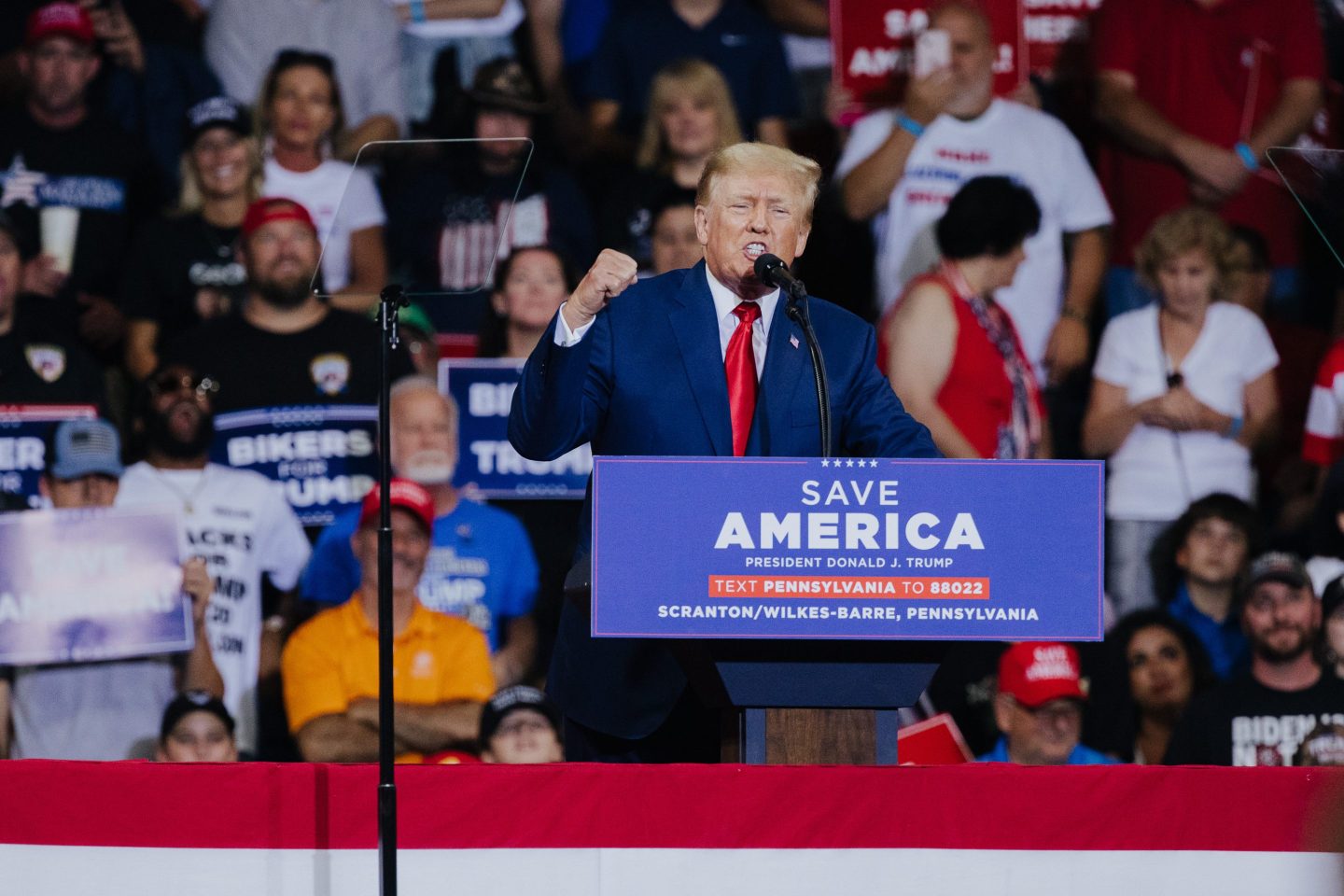 In his first comments since the FBI raid on his Mar-a-Lago compound, Donald Trump took aim at electric vehicles in a speech over the weekend that managed to attack two of his main opponents—rising Republican star Elon Musk as well as incumbent President Joe Biden.

Trump’s ambition to be the first to win back the White House since Grover Cleveland in 1893 was dealt a blow last month when law enforcement authorities seized confidential records property of the federal government unlawfully stored at Trump’s Florida home.

The polarizing Apprentice reality TV star-turned-politician had already been facing an uphill battle of late. Soaring gas prices have been on the decline, robbing Republicans of their biggest cudgel, while Biden pushed through a series of signature legislative wins for his policy agenda including tax breaks for electric vehicles popularized by Musk’s Tesla.

At a speech this weekend in the coal-mining town of Wilkes-Barre in Pennsylvania, Trump hinted he would roll back any such subsidies, recounting a story about a friend fed up with driving their EV from Kentucky to Washington, DC, due to all the alleged charging stops.

“He told me (…) ‘please, please let’s get rid of this stuff’,” claimed Trump, adding it allegedly took the person “more time to charge the damn car” than spent driving it.

Trump often indicates his own personal preferences by couching them in stories based on unnamed, anonymous people that are difficult if not near impossible to verify in an attempt to make them sound like they enjoy broad grassroots support.

For example, it would seem unlikely that Trump could have referred to Kentucky representative Thomas Massie, one of the few Republican members of Congress to drive a Tesla. The MIT-educated electrical engineer has been a customer of Musk for a decade now and would be well accustomed to driving one.

Any rollback on EVs would likely hurt Musk’s business. Despite its competitors’ best efforts, Musk’s company continues to dominate the U.S. market for EVs. According to industry research firm Kelley Blue Book, every two out of three new EVs sold in the country sported a Tesla badge on the hood.

Importantly, the visionary CEO not only has a growing following among Republicans ever since he switched parties, but he also opposes Trump’s continued grip on the party and favors his greatest internal competitor: Florida governor Ron DeSantis.

A subsequent feud erupted after Trump branded Musk “another bullshit artist”, prompting the Tesla CEO to tell the ex-President his political career was over.

“It’s time for Trump to hang up his hat & sail into the sunset,” he wrote, ending any debate over whether he might back the real estate tycoon’s bid for another term in the White House.

His support for DeSantis puts him at odds with the Tesla CEO’s own former business partner, Peter Thiel, an influential Silicon Valley venture capitalist and early backer of Trump during his victorious 2016 bid for power.

The auto industry is not just any. It stands for the decline of the American middle class once built on steady, well-paid factory jobs with health care, pensions and other benefits.

Trump managed to win the 2016 election against a heavily favored Hillary Clinton by defeating her in the nation’s Rust Belt.

He was able to flip blue states like Michigan thanks to his attack on the NAFTA free trade agreement that shipped thousands of U.S. assembly plant jobs south of the border as well as threats to impose punitive 25% import tariffs on Mexican-built cars.

Although Biden defeated him by retaking Democratic strongholds through his embrace of trade unions like the United Auto Workers, his effusive praise for Tesla’s rivals like General Motors hasn’t always panned out.

CEO Mary Barra recently decided to build the Chevrolet Blazer EV in Mexico rather than a UAW-organized plant.

Should Trump lead the Republican ticket in 2024, he will likely need UAW members to once more place their faith in his “America First” policies, despite notable defeats as well.

But first, he will have to defeat DeSantis, whose popularity is on the rise ever since the January 6th House committee hearings have reflected badly on Trump’s role in the Capitol riots.

Trump’s attack on EVs comes days after Tucker Carlson devoted a portion of his daily show to portraying these cars as a danger to liberty and a trojan horse for state control as regulators like those in California can impose rolling blackouts.

“You have hundreds of millions of Americans dependent upon cars that the government can turn off in a second, that are by the way running software that tracks your every movement,” the controversial Fox News host said last week.

Given the proper hardware, any car can be tracked—China instituted this for its new vehicle fleet. Yet it is Tesla that popularized collecting its customers’ data for the purposes of delivering products like its Full-Self Driving assistance system and Tesla Insurance.

Trump’s broadside against EVs brought condemnations from Musk’s faithful such as Eva McMillan, who boasts nearly 11,000 subscribers that follow her FSD beta tests and other related Tesla content.

“I can’t believe I voted for Trump twice,” she posted. “I looked over his arrogant personality for many years. Now he is potentially hurting Tesla and that’s a fine line. He lost a great believer.”