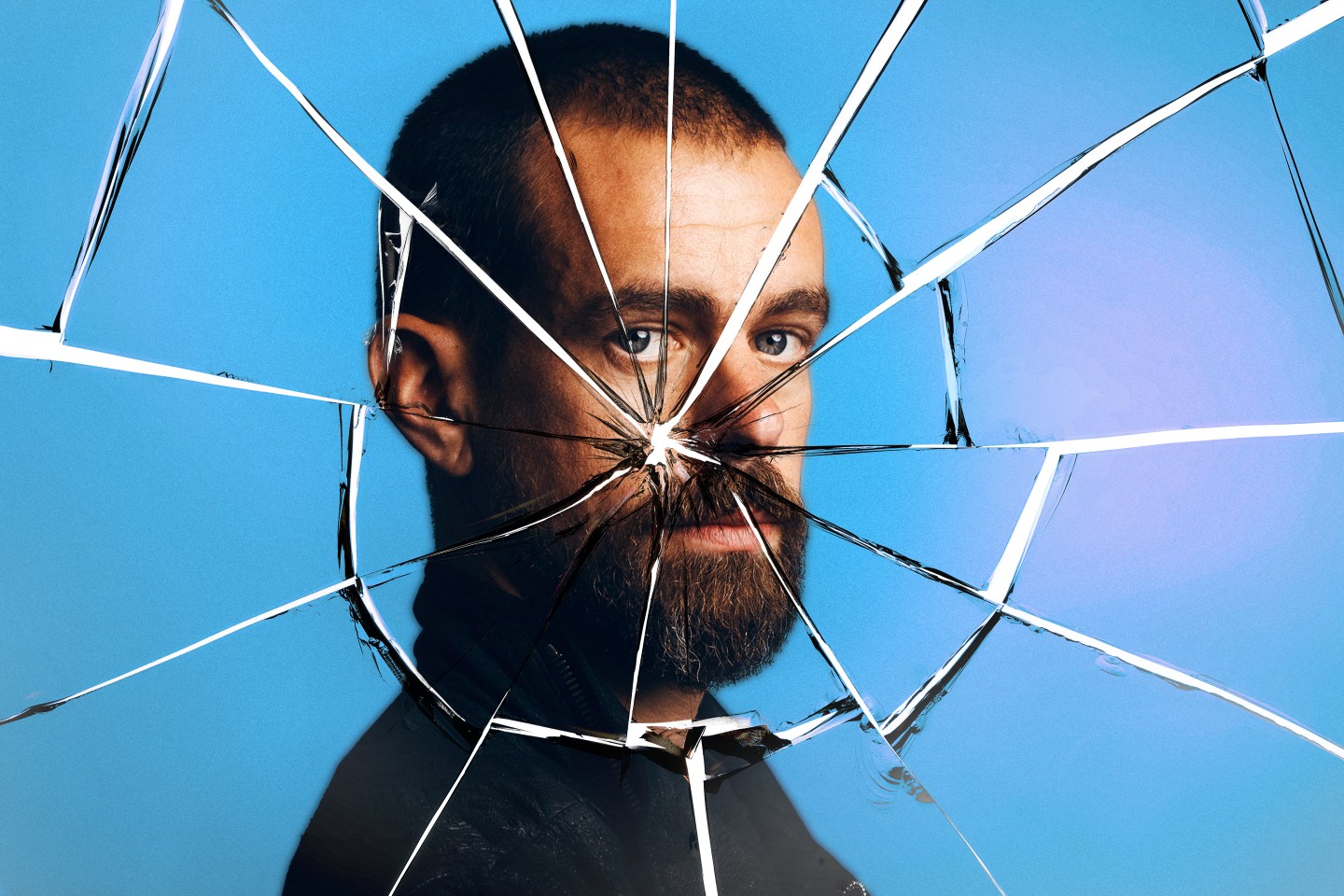 Jack Dorsey's reputation has indeed taken a hit as a result of all the recent news events.
Photo Illustration by Fortune; Original Photos by Getty Images (2)

With his silver nose ring, big beard and eccentric lifestyle, Jack Dorsey has ranked among Silicon Valley’s most high-profile celebrities for the past decade, revered among engineers and startup founders as an internet visionary and guru of all things tech.

But every guru needs a loyal following, and Dorsey’s eminence among techies is suddenly on shaky ground amid a cascade of bad news at Twitter, the company he cofounded and led as CEO until November 2021.

A recent whistleblower complaint portrayed Dorsey as a disengaged leader, whose neglect created a “rudderless” organization plagued with serious security vulnerabilities. Elon Musk’s efforts to back out of a $44 billion deal to buy Twitter, along with his public trashing of the company and its employees, has cast a humiliating pall on Dorsey’s legacy and left many observers baffled by Dorsey’s lack of response.

Dorsey himself recently tweeted that his “biggest regret” was that Twitter had become a company.

Many in Silicon Valley are having second thoughts about Dorsey.

In an exclusive survey of more than 3,300 tech employees that Fortune conducted with Blind, an anonymous social network for professionals, more than half said they believed Dorsey’s reputation had suffered as a result of the whistleblower allegations and 41% said the protracted deal drama with Musk had made Dorsey look bad.

Of the roughly 200 Twitter employees who participated in the survey, 58% said they would “never” or “likely not” work for Dorsey again.

Blind, which is comprised of anonymous professionals who must use a verified corporate email to register for the service, is not necessarily representative of the overall opinion within a company, or of the broader tech industry. People who use and are active on Blind may be disgruntled.

Dorsey remains the CEO of Block, the $41 billion fintech firm he founded, and that he ran alongside Twitter for many years. Interviews with several Block employees showed a far more positive view of Dorsey.

“I think Jack is a rare breed amongst tech CEOs. He genuinely wants to make the world a better place. I’ve worked for him for many years and he’s authentic,” a Block employee told Fortune.

Still, the results of the Blind survey represent a striking rebuke of one of the most celebrated figures in the tech business, where investment dollars and highly prized engineering talent often flow towards individuals with the strongest personal brand.

The whistleblower allegations are “a black eye” for Dorsey and for Twitter, said Dan Ives, a software analyst at Wedbush Securities. “Dorsey has a strong legacy in the Valley but this Twitter situation has left a stain on his brand.”

Representatives for Dorsey did not respond to requests for comment.

A silent CEO at the helm of two companies

Twitter’s struggles date back to well before Dorsey’s reign. When Dorsey was tapped to be Twitter’s CEO in 2015, the hope was that the then 38-year-old cofounder could bring a spark to a business suffering from anemic user growth and lackluster product innovation.

Dorsey, who helped created Twitter in 2006 and served briefly as its first CEO until 2008, was a controversial choice even at the time of his restoration. He had been fired from the CEO job the first time, and when the Twitter board announced his return to the CEO suite 2015, the news came with an unorthodox twist: Dorsey would remain CEO at Square (the fintech company, now called Block, that he cofounded), and split his time between Twitter and Square.

The dual CEO role had an obvious parallel with Apple founder Steve Jobs, who famously returned to Apple after being ousted, and who worked as the CEO of Apple and animated film studio Pixar. Like Jobs, Dorsey quoted the Beatles. He even recruited early Apple employees to work at Square.

Dorsey’s status quickly rose within the tech world. And his tweets about his spiritual lifestyle, including intermittent fasting and retreats involving 17 hours of silent daily meditation, made him an object of public fascination.

Inside Twitter however, the superstar CEO appears to have enjoyed less goodwill. In an open-ended question in Fortune’s Blind survey about Dorsey’s leadership style, the most common word used among the Twitter employees who responded to the question was “absent.”  Negative words (“aloof,” “weak”) were used three times more often than positive words (“inspiring”, “caring”).

Dorsey handed the Twitter CEO job to Parag Agrawal in November, and he stepped down from Twitter’s board of directors at the end of May, so the responses may not necessarily reflect the views of employees who worked directly with Dorsey. But cracks within Dorsey’s organization have become increasingly visible for years.

One of the most dramatic occurred in 2020, when a teenage hacker from Florida managed to hijack the accounts of some of Twitter’s most popular verified users, including Barack Obama, Jeff Bezos, and Kanye West.

Dorsey personally recruited Peter “Mudge” Zatko, a famous cybersecurity expert, to fix things after the security fiasco. But Zatko, who was fired from Twitter after a year, claims in a whistleblower lawsuit that Dorsey was “extremely disengaged” and was “experiencing a dramatic loss of focus” in 2021.

The notion of technological neglect at Twitter is also embedded in Musk’s efforts to back out of his deal to acquire the company by claiming that the prevalence of artificial bots on the platform is much greater than Twitter acknowledges.

While many legal experts believe Musk’s arguments have little chance of prevailing in court, the Tesla CEO has pressed his case by publicly ridiculing Twitter’s employees, their work ethic, and the value of Twitter’s platform. Dorsey, who initially praised Musk as the “singular solution” to oversee Twitter, has largely kept mum throughout the bitter ordeal.

One former Twitter executive and boardmember, Jason Goldman, has publicly questioned Dorsey’s loyalties, accusing the Twitter cofounder of “backstabbing” the board in his dealings with Musk.

The sentiment appears widespread. In Fortune’s Blind survey, 56% of the roughly 3,300 respondents working at companies including Apple, Lyft, and Amazon, said they felt that Dorsey had let Twitter employees down by not pushing back against Musk. A greater share of those respondents said they would not want to work with Dorsey in the future than those who said they would.

To Web5 and beyond

The months ahead are sure to bring more attention to Dorsey, as Twitter’s lawsuit to force Musk to complete his acquisition goes to trial, and as Zatko’s whistleblower case moves forward. Lawyers for Musk have filed a motion in court seeking documents from Dorsey about Twitter’s handling of bots.

Dorsey’s focus, meanwhile, appears to be increasingly on bitcoin. “I don’t think there is anything more important in my lifetime to work on,” he said about the cryptocurrency at a conference last summer.

Dorsey launched a subsidiary company in July 2021 within Block called TBD, aiming to make the “decentralized financial world accessible.” He was notably critical of current Web3 models that rely on venture capital funding and even got into a very public spat with VC firm Andreessen Horowitz (a16z). He dubbed TBD a “Web5” company in spite of the trend.

As recent paparazzi shots of Dorsey vacationing in Spain attest, the tattooed tech exec still has a mystique that garners attention.

And it’s clear that Dorsey has an unparalleled ability to fall hard, dust himself off and move on to the next. The comeback story is, after all, Silicon Valley’s favorite trope — an age-old classic, that has recently featured WeWork’s Adam Neumann and Uber’s Travis Kalanick.

Among the Block employees who participated in Fortune’s Blind survey, 20% said said they would “absolutely” work with Dorsey again. That may be all he needs.