Dropping dough inside Disney+? Why more companies are integrating e-commerce in their apps 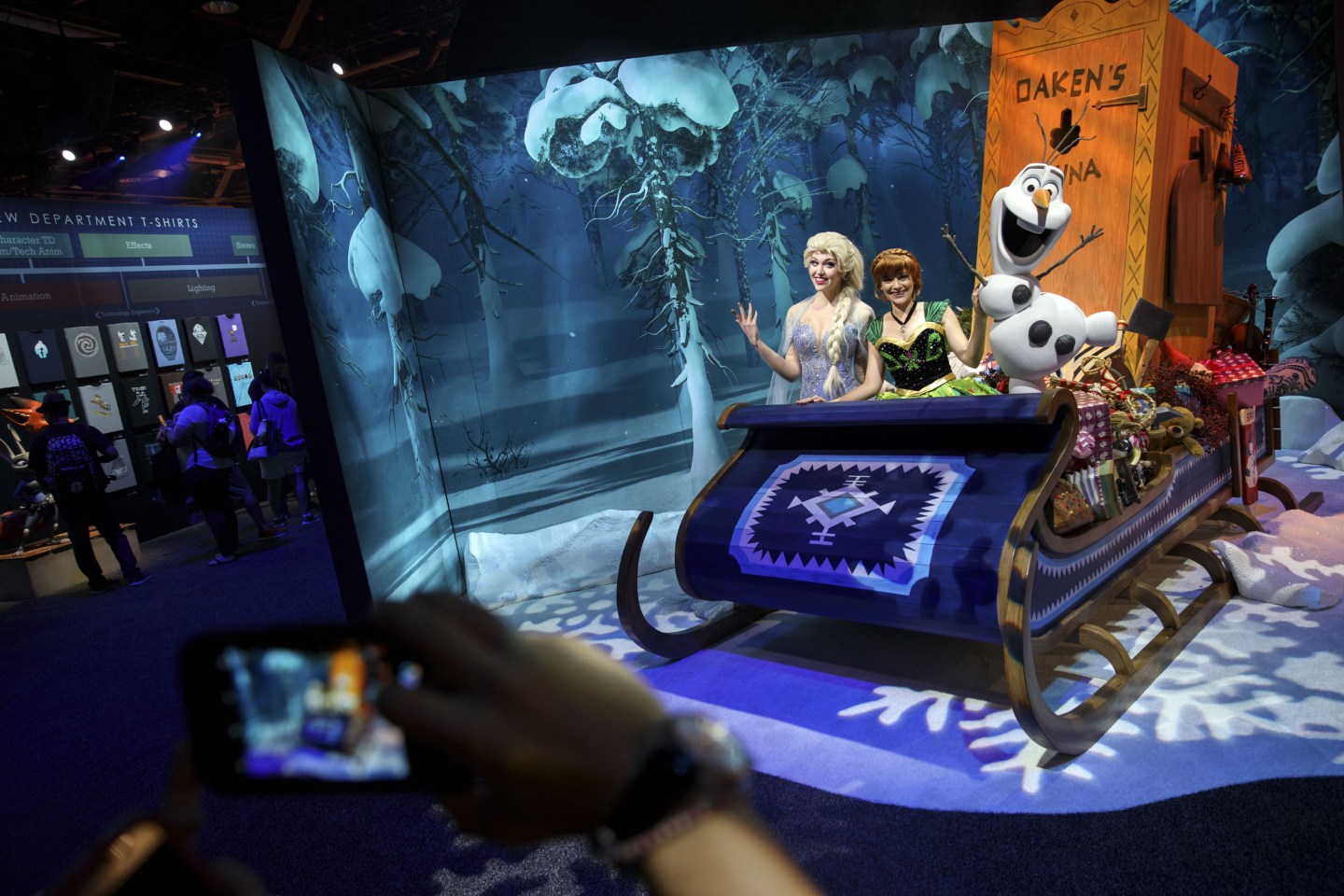 Imagine your youngin is watching Frozen on Disney+ for the 43rd time and demands an Elsa costume with Halloween just around the corner.

Chances are you head to the Amazon app to grab the garb. Or you do a quick Google search, where the top-listed results send you to Amazon, J.C. Penney, H&M, and Party City.

For Disney executives, this isn’t ideal. They’d prefer that you slide into shopdisney.com and buy their $49.99 dress in a flourish of corporate synergy.

So it’s not necessarily a surprise that the Wall Street Journal reported Wednesday that company officials are exploring ways to “enable subscribers to its Disney+ streaming service to buy merchandise such as T-shirts, themed accessories, and children’s costumes associated with some of its shows by scanning a QR code on the service.”

For many tech and commerce companies, of which Disney counts itself as both, the app is quickly becoming more than a content-hosting platform. In recent months, multiple big-name firms have announced plans to build more e-commerce features into their apps, aiming to capitalize on their one-stop-shopping potential.

The idea of in-app e-commerce is hardly new. Instagram rolled out in-app shopping capabilities in 2019. Facebook followed suit in 2020, with Snap and TikTok joining the trend in 2021. In China, Tencent operates the so-called super app WeChat, which allows users to message, buy, play, and connect, among other verbs.

But the speed with which companies, including Disney, are adopting or developing these capabilities has ramped up over the past several months.

Pinterest unveiled a beta version of an in-app checkout feature in March, with plans to expand access later in the year. The offering, a partnership with Shopify, gives users the opportunity to buy pinned products without leaving the app.

Twitter made its shopping feature—a module that sits near the top of a merchant’s profile, providing links to items for purchase on a vendor’s website—available to all U.S. sellers in June.

YouTube also announced a partnership with Shopify in July to install new shopping capabilities, including some that allow creators and vendors to link to their Shopify storefront through their YouTube channel.

And Meta-owned WhatsApp rolled out a grocery shopping option in India this week, its first end-to-end e-commerce offering on the hugely popular app. Users can select and pay for groceries from the comfort of the app through Meta’s partnership with India’s JioMart.

The emphasis on e-commerce gives ad-supported internet companies another avenue for revenue—even if the money is likely minimal for most outfits. (Twitter doesn’t even charge a fee or make a commission off its shopping feature.)

Additional revenue streams are particularly welcome given the twin storms battering the online ad business: a slowdown in ad spending owing to broader economic conditions and privacy updates by Apple that have made it harder for app developers to track and collect user data on iPhones. Meta, Twitter, and Snap have forecasted losses in the billions of dollars from Apple’s changes alone.

Insider Intelligence estimates suggest smartphone in-app spending rose 35% in 2020 and 23% in 2021, and it’s projected to jump another 13% this year before tailing off a bit as the decade progresses.

“I think if there are opportunities to both create new value and meaningful revenue lines and also provide some diversification, that’s obviously going to be something that will be appealing,” Meta’s vice president of monetization, John Hegeman, told The Verge for an article Wednesday about the company’s exploration of more paid features.

More important, the e-commerce efforts keep eyeballs on apps, the ultimate currency of the ad-driven attention economy. As TechCrunch reported last month, new data from app intelligence company Data.ai shows Android users in most countries surveyed spent four-plus hours per day in apps, a figure that keeps growing even as the pandemic recedes.

App developers still have a long way to go to maximize their shopping-related revenue and technological capabilities. Some outfits remain overly reliant on external links and outside partners, making it difficult to earn a cut of sales. Early forays into in-app live shopping haven’t panned out, even for tech titans like TikTok and Meta. And weaning consumers off Amazon won’t be easy.

For now, at least more of them are talking shop.

Caught in the crossfire. Chipmakers Nvidia and AMD said the U.S. government has put new restrictions on exports of high-end artificial intelligence semiconductors to Russia and China, a move destined to heighten tensions between the geopolitical foes. Nvidia said the ban could cause a $400 million hit to its current-quarter revenues, while AMD said any losses would be negligible. A spokesperson for the U.S. Commerce Department declined to confirm the export restriction to the New York Times, but added that the federal government is generally preventing China’s acquisition of American-made technology that could enhance the republic’s military and surveillance capabilities.

Taking a closer look. Antitrust regulators in the U.K. will conduct a deeper review of Microsoft’s planned $68.7 billion acquisition of video game developer Activision Blizzard if the tech giant doesn’t address their concerns about the deal in the coming week, Bloomberg reported. The Competition and Markets Authority said it fears Microsoft could undercut rivals in the video game industry by restricting other platforms’ access to popular titles developed by Activision Blizzard, including Call of Duty and World of Warcraft. CMA officials have scrutinized tech-related mergers more closely than some of their foreign counterparts in recent months.

A top-flight trio. Tech conglomerates Sony and Tencent have each acquired stakes of roughly 15% in FromSoftware, the video game developer behind this year’s smash hit Elden Ring, the Washington Post reported Wednesday. The deals further solidify the partnership between the three stalwarts of the video game industry, who have worked together on gaming and anime content over the past year. FromSoftware, a well-respected institution in the gaming world, received wide acclaim following the release of Elden Ring, one of the biggest commercial and critical successes of the past decade.

It’s finally here. Twitter announced plans Thursday to make an edit button available to paying subscribers later this month, delivering a long-demanded feature to those willing to pay $5 per month, CNBC reported. Company officials said Twitter Blue members will be allowed to change text and tags for up to 30 minutes after sending a tweet. Each edited tweet will be marked and allow viewers to see past versions of the text.

A price of growth. The bigger they grow, the harder they fall. The Information reported Wednesday that Snap’s decision to slash its workforce by 20%, a greater percentage than many of its tech peers, can be traced in part to its hiring spree over the past two-plus years. While most companies have added staff since the onset of the pandemic, few scaled up at the rate of Snap, which nearly doubled its headcount between March 2020 and June 2022. So when a pullback in ad spending pummeled social media companies, Snap found itself particularly in need of cost-cutting measures.

Other companies that rely on digital advertising increased their workforces at about half the rate Snap did over the past two years. For example, Google’s parent, Alphabet, grew its head count 41% over the same time period. Twitter grew 53% from December 2019 to December 2021, when it last reported data.

Microsoft also expanded its head count 41% during the pandemic. Apple was an outlier among big tech: It grew its workforce only 12% from September 2019 to September 2021 (the company only reports head count on an annual basis). Alphabet, Twitter and Microsoft have all slowed hiring in the past few months in response to rising inflation, supply chain constraints and other economic pressures.

Affirm’s CFO lays out the future of BNPL as investors start demanding profitability, by Jessica Mathews

Kids opening up to their robot toys may help detect mental health issues before parents can spot them, by Sophie Mellor

Digital therapeutics companies have a lot to learn from the mental health care industry they are looking to disrupt, by Mike Desjadon

New CEO of Alibaba’s most important international business unit wants to rival Amazon and Zalando in Europe. ‘We go where brands want us to go,’ by Yoolim Lee and Bloomberg

The thin privacy line. An addendum to this week’s Data Sheet on data brokers arrived Thursday, courtesy of the Associated Press. The news outlet published an investigation into local law enforcement agencies obtaining cell phone tracking records sold by a Virginia-based company, allowing police to monitor individuals’ past movements without a search warrant. Records obtained by the AP found nearly two dozen departments have used a tracking tool from Fog Data Science to search billions of records tied to 250 million mobile devices. Police officials said they responsibly use the legally obtained data in emergency situations, such as tracking people suspected of murder or kidnapping. But the Federal Trade Commission argued in a lawsuit this week that cell phone tracking data constitutes a privacy violation that violates federal law.