Bad Bunny and Lizzo break new ground not only at the VMAs, but for the next generation of artists of color 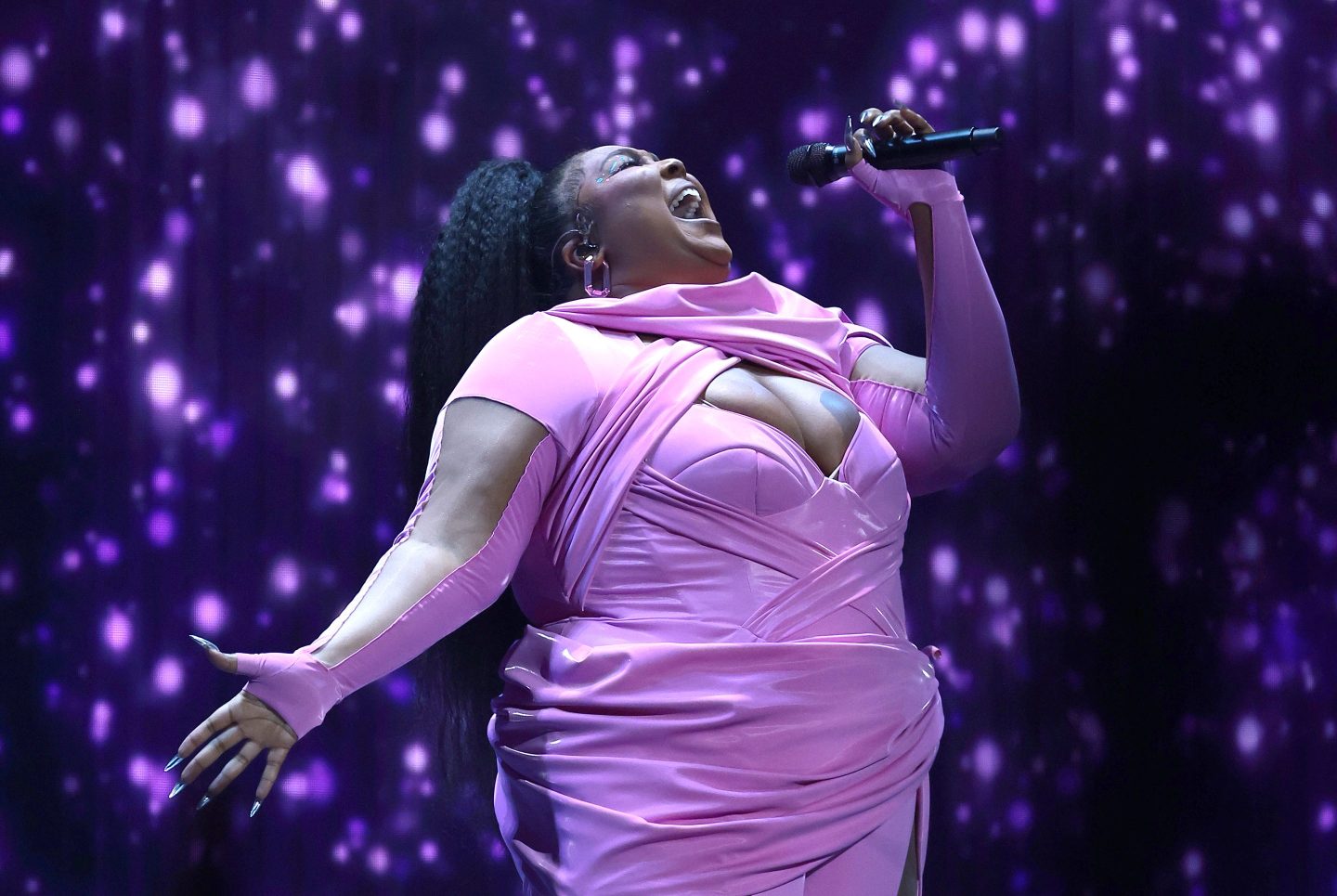 Artists like Lizzo and Bad Bunny are winning both on stage and off as their music and visibility signals a sea change for representation in music.
Dimitrios Kambouris—Getty Images for MTV/Paramount Global

The MTV Video Music Awards is always a romp of an awards show, filled with music, fashion, and brimming with poppy—and sometimes pointless—drama. This year’s event was no exception.

But let’s talk about two of the big winners.

Puerto Rican rapper and singer Bad Bunny became the first non-English-language artist to win the coveted Artist of the Year. He also upstaged the iconic Madonna and Britney Spears kiss during the 2003 VMAs by kissing both a female and male backup dancer during his onstage performance of his hit song “Tití Me Preguntó”.

Everyone wants to kiss Bad Bunny these days. The megastar has been playing sold-out arena shows, enjoying megastar collaborations, topping power rankings and music charts, and delivering the best-selling record of the summer. He even has an upcoming role as El Muerto, the first Latino character to lead a Marvel live-action film.

“No one even comes close to Bad Bunny’s stardom right now,” declared a breathless Bloomberg in July.

He’s definitely having a moment, and it matters. “His music videos and style defy gender norms and pave the way for further inclusivity and acceptance for all,” notes PopSugar writer Alex Dvorak. “Bad Bunny is a part of the movement of today’s youth to speak up and speak out. His uniqueness emulates this generation’s custom-made individuality and Latin pride.”

“I always knew that I could become a huge artist without changing my culture, my slang, and my language,” Bad Bunny said, accepting his Moon Person in Spanish. “I am Benito Antonio Martínez Ocasio, from Puerto Rico to the world.”

But for sheer drama, nobody delivered like Lizzo, who brought the couture and the perspective. She was nominated for four awards and won in an unusual category: Video for Good. Bebe Rexha explained the award by saying music “has always been the soundtrack to change…The nominees push us to be better to ourselves and nicer to each other.”

Lizzo lived up to the message.

“I don’t know what ‘music videos for good means,’” she said. “But I do know what your vote means, and that’s a fucking lot. Your vote means everything to me.” She quickly switched gears. “[Your vote] means everything to make a change in this country,” she added. “So, remember when you’re voting for your favorite artists, vote to change some of these laws that are oppressing us.”

Lizzo pays a high price for the good she does.

She has been candid about the consistent fat shaming, insults, and racist abuse she receives online, making headlines for clapping back at trolls and using social media to affirm the broader message of love, self-acceptance, and beauty in all forms.

She arrived at the event, resplendent in a gorgeous black Jean Paul Gaultier Couture spring/summer 2022 gown, but under a familiar dark cloud.

Last week, former Madtv cast member Aries Spears—who is now world-famous for pissing off Lizzo fans—made horrific comments about Lizzo’s body during an Art of Dialogue interview on YouTube. It quickly trended on Twitter. “I can’t get past the fact that she looks like the shit emoji,” he said. Then he made fun of her adoring, body-positive fans. “Y’all jump on me for making jokes, but y’all won’t be fucking real and go, ‘Sister, put the eclair down. This ain’t it. It’s treadmill time.’”

Lizzo, unapologetic as always, processed the moment in real-time. “Crying myself to sleep was so fun last night that I think I’ll do it again,” she tweeted in response to the online firestorm.

But she ended her acceptance speech on a very different note.

“And now, to the bitches that got something to say about me in the press…Aries, what’s good?” she said, referencing another epic VMA moment between Nicki Minaj and Miley Cyrus. “You know what, I ain’t gonna say nothing. They be like, ‘Lizzo, why don’t you clap back? Why don’t you clap back?’ ‘Cause bitch, I’m winning, ho.”

Lizzo labored in entertainment for ten years before she became an overnight sensation, and I shudder to think about the kind of abuse—including well-meaning “advice”—she had to brush off to keep going.

The opportunity cost of exclusion, racism, and misogyny is greatness in the world. Of course, a person doesn’t have to be an award-winning megastar to express their greatness, but it does mean that Lizzo’s visibility sends an enduring message to anyone who is still brushing off a cruel and unwelcoming world: You are beautiful; you are loved, keep going. You can win, too.

You can find all the VMA winners here.

Why unapologetically Black female role models matter, once again Look no further than this poignant piece from my colleague L’Oreal Thompson Payton about her quest to manage motherhood with professional achievement. Watching Serena Williams and Beyoncé struggle and succeed with their choices gave her strength. “Granted, I’m not selling out arenas and there aren’t millions of people watching my every move,” she writes. “But I’ve learned a lot about what motherhood and ambition can look like based on their examples.” She also embraced the notion that the work she does is building a better world for her daughter, a foundation of good parenting. “So I’m building, brick by brick. Or, in my case, word by word, a better, more diverse and equitable world, not just for my daughter, but for future generations.”
Fortune

DC Comics is under fire for its efforts to celebrate Hispanic Heritage Month, which begins on September 15. The company pre-released four special covers that were immediately called out by fans for being stereotypical, and focusing entirely on DC superheroes eating or holding food—tacos, flan, tamales, you get the point. "I feel that it is incredibly tone-deaf — almost like a parody of our culture when we're reduced down to food, you know? And that, street food," said comic creator Edgardo Miranda-Rodriguez. "It's very, very codified for me. But it also speaks to how unaware they are that this is coded, that this is offensive, that it is tasteless. And it feels very exhausting."
NPR

Nebraska school officials shut down a student-run high school newspaper after the journalists ran two LGBTQ-related columns. The decision was made after a period of escalating tension. Last March, the journalism students, including at least three who were transgender, were ordered to use their names assigned at birth on bylines. In response, the students dedicated their final issue in June to LGBTQ issues, including a piece on the origin of Pride Month. School officials decided to shut down the paper. “I think they said that if they can’t stop it, can’t control it, then they’re just going to get rid of it,” said a lawyer for the Student Press Law Center.
New York Times

White premature babies are significantly more likely to receive lifesaving treatment A new study published in the Journal of American Medicine shows that very early babies, born between 22 weeks and 25 weeks, 6 days, are significantly more likely to receive necessary interventions than pre-term Black, Latinx, and Asian babies. Researchers examined birth records of 61,908 early or “periviable” births between 2014 and 2020. From their conclusions: “Data from 1995 to 2011 suggest that racial and ethnic differences exist in patterns of active treatment in the periviable period,” they write. “In an era of increased intervention in the periviable period and persistent barriers to equitable care, using contemporary population-level data from across the US can inform understanding of racial and ethnic differences regarding treatment in the periviable period.”
JAMA

"It's like a little mosquito bite. Somebody's like, 'Well, you know, you a big girl, so you can never have short hair. You always have to have a big hair, 'cause you're a big girl.' And they say that lovingly, but I'm like, that's a little mosquito bite. You don't even know it's there. But, soon you look up, you're covered in mosquito bites. And you're like, 'Oh my God, I have all of these things.' But they were so normalized to me, because they were so innocent. They meant well. But I had to, like, peel back a lot of layers."