20 million people could have their student loan balances eliminated by Biden’s forgiveness plan. Here’s who qualifies and how to apply. 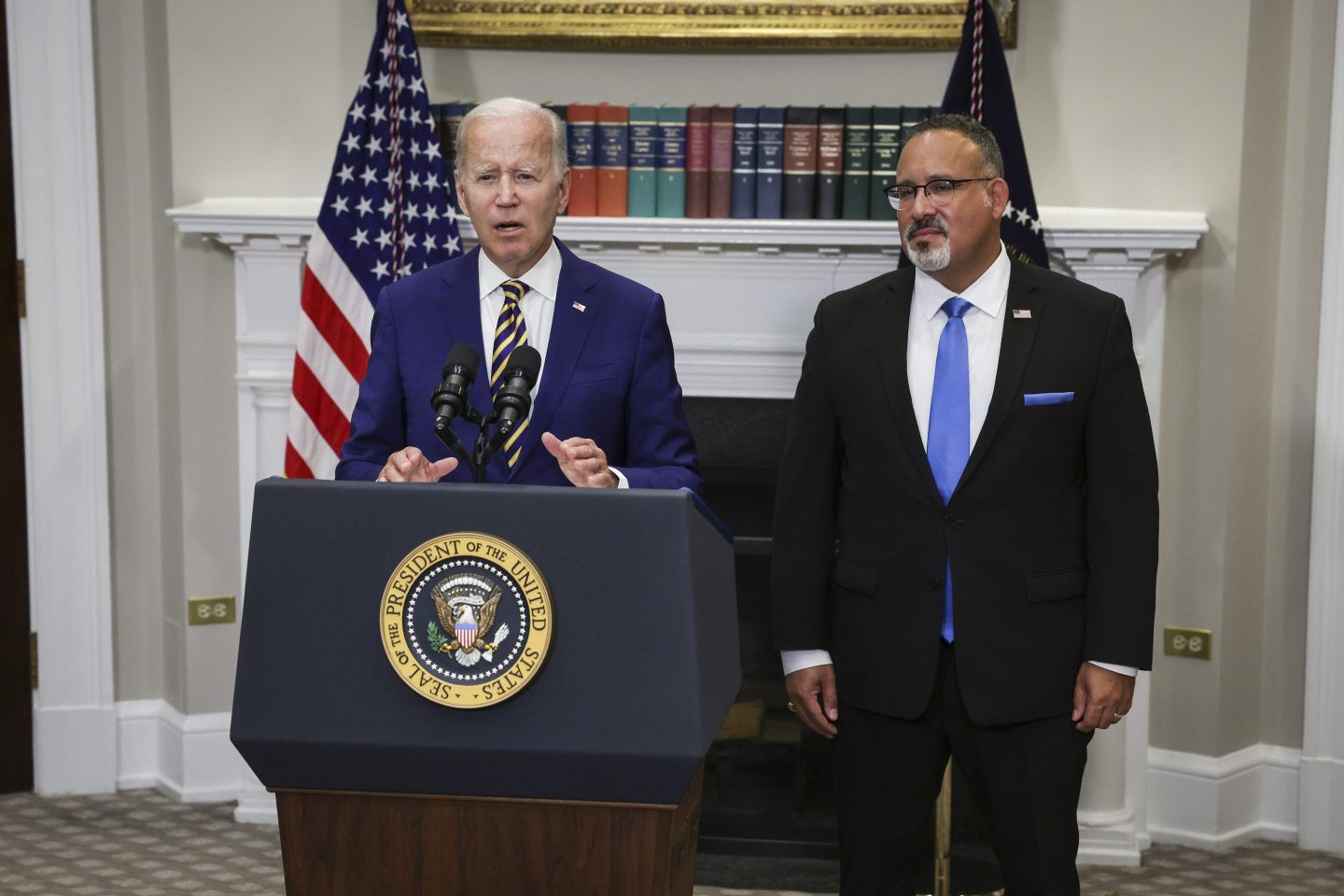 Do you have questions about the student loan relief plan the Biden administration unveiled on Wednesday? Please email them to reporter Alicia Adamczyk at alicia.adamczyk@fortune.com.

On Wednesday, after months of anticipation, President Joe Biden announced his plan for widespread student debt forgiveness. Millions of federal borrowers will receive up to $20,000 in debt relief, depending on their income and loan type.

In addition to loan forgiveness, Biden also extended the pause on student loan payments for the last time. Borrowers will not need to pay their monthly loan bills until January 2023.

There are still many unknowns about the student debt forgiveness plan and how it will it work. But the U.S. Department of Education and other student loan experts were able to answer some of Fortune‘s questions about Biden’s plan. Here’s what we know so far.

Who qualifies for student loan forgiveness?

Borrowers who took out most types of federal loans before July 2022 qualify for forgiveness if they—or their parents, if they are dependents—earned under $125,000 in adjusted gross income (AGI) in tax year 2020 or 2021. For married couples who file taxes jointly and heads of household, the AGI threshold is doubled to $250,000.

The highest-income borrowers do not qualify for forgiveness.

Which loans qualify for forgiveness?

Federal undergraduate, graduate, Parent PLUS, and Pell Grants all count under the forgiveness plan.

Borrowers with Pell Grants, who meet the income limits, can qualify for up to $20,000 in relief, while other borrowers are eligible for up to $10,000. Relief is capped at the amount of debt each borrower has. So if are eligible for $20,000 in debt relief, but have a $5,000 balance remaining, you will receive $5,000 in forgiveness.

The loans must have been disbursed before July 2022 to qualify for forgiveness. That means those still in school can have their balances reduced.

Private loans—those held by banks or other financial institutions, not the Department of Education—will not be forgiven.

Do current students qualify for forgiveness?

Yes. But if you are claimed as a dependent by your parents or guardians on their tax returns, then their income will be used to determine eligibility.

Do people who didn’t graduate qualify for forgiveness?

Yes. As long as you meet all of the other eligibility requirements.

How many people will be eligible for forgiveness?

How do borrowers apply for student loan forgiveness?

Borrowers will need to apply for forgiveness, according to the Department of Education. That application—on which borrowers will certify their incomes—will be available in October, Bharat Ramamurti, director of the National Economic Council, told reporters Friday.

The Department of Education will process the applications on a rolling basis, and it will take four to six weeks for borrowers to see their balances adjusted, Ramamurti said. Borrowers should submit their application before Nov. 15 so that the debt is forgiven before the payment pause ends on Dec. 31 (applications will still be processed after that date).

The department also said it has the income information for certain borrowers, and 8 million borrowers could have their loans automatically forgiven without needing to fill out the form. While it’s not immediately clear who those borrowers are, it could include people who are on an income-based repayment plan and already submit their income information to the Education Department to certify, says Betsy Mayotte, the president and founder of The Institute of Student Loan Advisors and a long time student loan advocate.

It’s likely the borrowers whose income information the Department of Education already has will see their debt canceled earlier than other borrowers, Mayotte says. That said, more information will be available on that in the coming weeks.

To be notified by the Department of Education when the application is open, you can sign up for federal student loan borrower updates online.

How will student loan forgiveness impact your taxes?

You won’t need to pay taxes on any loans that are forgiven. At least not at the federal level. A provision in the 2021 American Rescue Plan (ARP) precludes student loan cancellation from being taxed as federal income, as is typical for many types of forgiveness under normal circumstances.

Which states will benefit the most from student loan forgiveness?

Total federal student loan debt in the U.S. is around $1.6 trillion, according to the most recent data provided by the Department of Education’s Federal Student Aid Office. Nationwide, borrowers average $37,667, but that figures varies when you take location and degree type into consideration.

Borrowers in Maryland and Georgia also owed significantly more than the national average, at $43,619 and $42,200, respectively, per borrower. North Dakota had the lowest average balance, at $29,885.

When will borrowers see their loan forgiven?

It will take a while, says Mayotte. And there are bound to be headaches for some borrowers along the way. The government—and certainly the Education Department—has never undertaken this kind of forgiveness effort before.

"This is a big project. It’s not going to happen tomorrow and it’s not going to end all at once," she says. "It could take six months or even longer, and there’s not going to be any way to push yourself up in the line at all. They're going to do it in batches and do it as fast as they reasonably can."

Borrowers should also be wary of scams in the coming months.

If you suspect a scam, report it to the Federal Trade Commission or your state's attorney general. And watch studentaid.gov and your servicer's website for update.

When will payments restart for borrowers who still have debt?

Not until January, at the earliest. Borrowers should look out for a billing notice at least three weeks before payments are due to restart.

You can also check in with your servicer or log into your online account to see when payments are planned to restart (once those websites start working again, of course).

It's possible that opponents of the plan could sue to stop the cancellation. It isn't immediately clear that Biden has the constitutional authority to enact this on his own, says Jacob Channel, an economist at Student Loan Hero.

"The reality is we're in a pretty unprecedented situation. There’s never really been this broad student loan forgiveness in the history of student loans in the U.S.," says Channel. "I do anticipate there will be quite a bit of vigorous discussion about the topic in the coming weeks and months. We’re all sort of in the dark together."

Typically, an act of Congress is needed to address or change the student loan system.

That said, Channel says he wouldn't want to be the one challenging the debt cancellation.

"If you’re a politician it might not be particularly beneficial to go up to someone and say, 'You know yesterday you got $10,000 in loan forgiveness? I don't think you should have that,'" he says.

What else do borrowers need to know?

Borrowers who made payments on their federal student loans during the COVID pause are eligible to get that money refunded, according to Federal Student Aid. If you made payments that could qualify for forgiveness, it might be smart to get a refund and keep more cash in your pocket. Call your servicer for more information.

Additionally, the Department of Education announced a plan to create a new income-based repayment plan that caps bills at 5% of a borrower's discretionary income, compared to the current 10%. It also would forgive a borrower's remaining balance after 10 years for borrowers with original loan balances of $12,000 or less, as opposed to the current 20 to 25. Interest would not accrue while a borrower makes payments.

The White House estimates this would decrease the average annual student loan payment "by more than $1,000 for both current and future borrowers."

Under the new plan, more types of payments would count toward PSLF (right now, only those made on-time and in-full on certain payment plans qualify).

This builds on changes the department has already made to the program. In October 2021, a limited waiver was announced that allows borrowers on the PSLF track to have all of their payments count toward forgiveness, even those that were made on the "wrong" payment plan, incomplete payments, and late payments. Non-payments made during the current payment pause also count toward the 120 needed for forgiveness.

There was no extension of the PSLF waiver included. Loans still need to be consolidated by the Oct. 31, 2022 deadline to qualify under the original waiver. So far, 175,000 borrowers have received forgiveness under the waiver, getting over $10 billion in debt canceled, according to the Education Department.

This is a developing story. Check back later for more details.