China’s bursting housing bubble summed up in a viral video, as official tells citizens to ‘Buy one property, then a second. Bought a second? Buy a third, and fourth’ 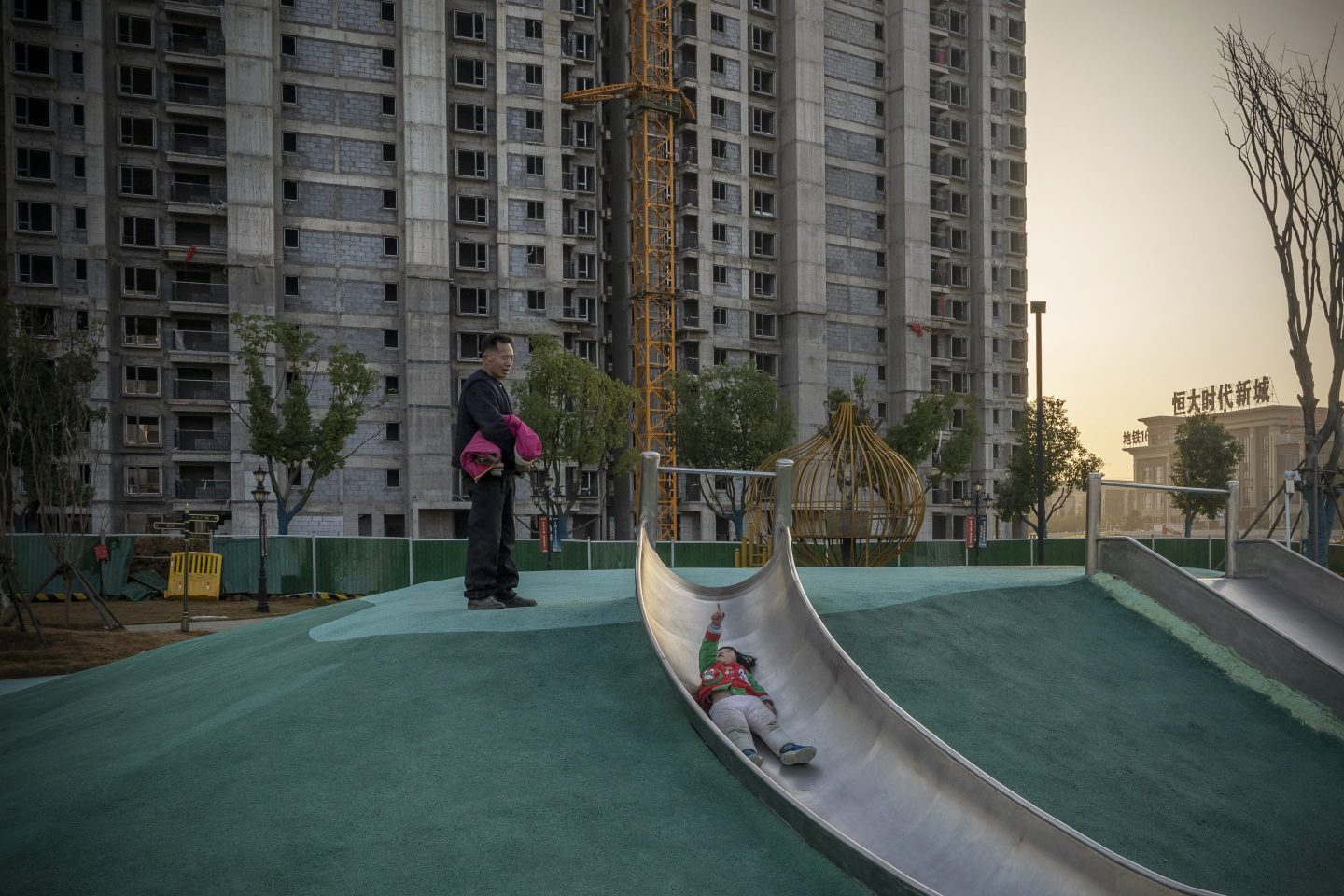 A child on a slide in front of unfinished apartment buildings at the construction site of a China Evergrande Group development in Wuhan, in December 2021.
Andrea Verdelli—Bloomberg/Getty Images

As China’s property crisis deepens and Chinese homeowners across 100 cities refuse to pay their mortgages, some local government officials are taking matters into their own hands.

Deng Bibo, a county party secretary of China’s Hunan province, encouraged everyone to buy multiple homes during his opening speech for a real estate exhibition fair in Shimen, a county of Hunan, on Tuesday.

“I hope that today all comrades will take the lead in buying property,” Deng said. “Buy one property, then buy a second one. If you purchased a second one already, then buy a third. Bought a third? Then buy your fourth.”

The speech went viral on Chinese social media, as netizens made fun of the request. Douyin, the Chinese version of TikTok, has been flooded with videos of Deng’s speech that attracted tens of thousands of user comments on each video. One user responded sarcastically: “It’s as simple as buying vegetables at the vegetable market.” Others questioned where they would get the money from to buy multiple homes.

Deng’s speech highlights China’s struggle to contain a growing crisis. For decades, Chinese citizens have funneled their cash into real estate, with a huge share of Chinese household wealth—70%—stored in property. In China, homebuyers pay upfront for a home. These presale funds essentially offer interest-free loans for property developers, which they have used to rapidly expand construction projects.

But the central government noticed the frothy housing market, and has tried to rein in developers’ ability to borrow money so easily. When that cash flow became constrained, it led to stalled building projects and half-finished houses. That means that many of the homes that people bought and paid for in full are not actually being built.

This crisis has intensified in recent weeks as homeowners across the country began refusing to pay their mortgages because of stalled projects and unfinished homes.

The country’s real estate woes threaten to upend its social stability—China’s middle class has long relied on property as its main source of wealth, and it accounts for 25% of the Chinese economy. That means that Chinese citizens are seeing their favorite means of investment no longer working for them—at the same time the nation is facing its biggest economic slowdown in decades.

China’s debt-fueled property market has been embroiled in turmoil since last year when Evergrande—the country’s most-indebted developer with $300 billion of liabilities—defaulted on its dollar bond payment and nearly collapsed.

Since then, the sector has faced a severe cash crunch, and many developers have been unable to pay their vendors and construction crews, as well as deliver completed apartments to homeowners who already paid for them.

Chinese homeowners started banding together in July to stage protests and mortgage boycotts. Over the past few weeks, homeowners have crowdsourced documents tallying the number of mortgage boycotts and project delays nationwide, and sent letters to government officials detailing their plight.

Chinese censors have tried to scrub the web of these crowdsourced documents and social media posts talking about the boycotts and project delays. Chinese authorities have also sought to reassure homeowners that their units will be delivered. But the protests and mortgage boycotts spread rapidly—both online and offline. According to a crowdsourced list on GitHub, an online file repository that Chinese homeowners have been using to share documents, groups of homeowners in at least 100 Chinese cities have threatened or begun to boycott their mortgage payments affecting over 320 housing projects.

Chinese homebuyers usually pool the whole family’s resources to buy a home, and have become accustomed to property prices only going up. That won’t happen, though, if the homes remain unfinished.

“It’s a matter of life and death…if their homes become negative assets,” Alfred Wu, associate professor at the National University of Singapore, told Bloomberg in July.

The widespread mortgage boycotts could worsen developers’ liquidity crunch. One estimate by Australian bank ANZ says that the protests could affect over $220 billion worth of lenders’ home loans.

China’s central government is now confronted with a dilemma: find a way to boost consumer confidence in the property market and put an end to the boycotts without completely bailing out property developers.

One obvious fix would be for the government to swoop in and save the country’s distressed property developers, who could then resume housing construction projects.

But Houze Song, a fellow at the Paulson Institute, a U.S.-China–focused think tank, wrote in an August note that this solution is politically challenging, given that Beijing is concerned that it would shift all the costs onto the central government. That means that it’s up to smaller, local municipalities.

“As of now, containing the problem has been left to local governments’ own devices. But they are increasingly…overwhelmed as the problem grows, since incomplete projects are highly concentrated in cities with weak property markets and anemic growth,” Song said. “This means the size of bailouts needed are disproportionately large relative to these local governments’ fiscal capabilities.”

The Shimen real estate exhibition fair, where Deng Bibo spoke, showcased 19 developers and 10,000 homes. The county government offered coupons valued at $442 for any potential homebuyers, and promised that it would subsidize 50% of the property tax of any home sold. Local officials in other counties have also taken matters into their own hands: Officials in Yulin, Guangxi, went door to door to tell villagers to buy at least 8,000 houses this year collectively, according to Chinese media.

In response to the public outcry over Deng’s speech, Shimen County officials told Chinese media that he only meant to encourage everyone to buy a house—and not to overanalyze his words.

Song argues that the current mortgage crisis will become “much more significant” than the Evergrande default a year ago.

“The solution requires Beijing to spend considerable political capital, rather than just financial capital,” he said.