Free speech has been under siege in classrooms. The attack on Salman Rushdie could signal where the battle is headed next 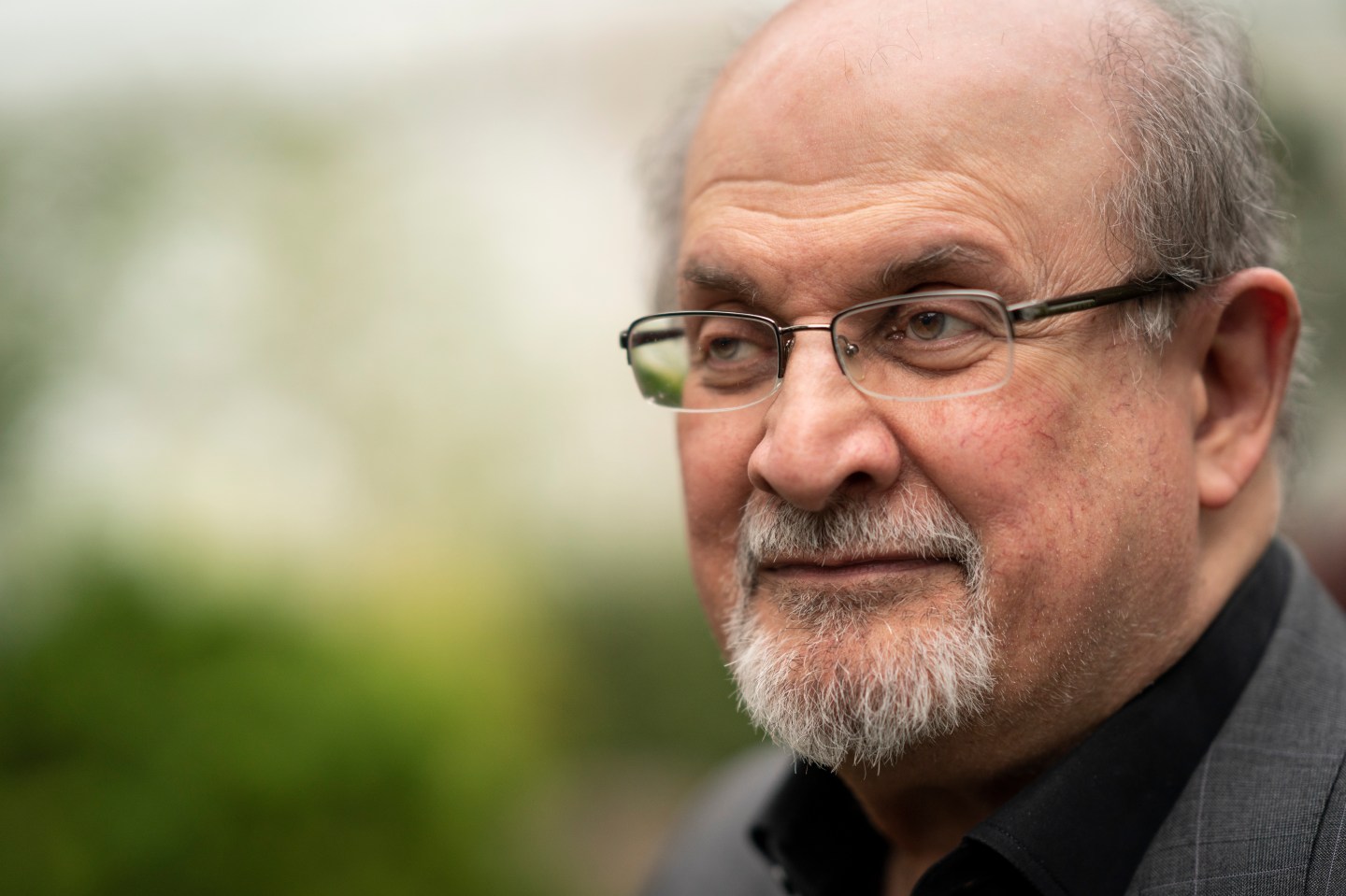 The attack on Salman Rushdie is the latest example of free speech under siege.
Photo by David Levenson—Getty Images

In December 1991, still early in the experience of living under a global death threat, novelist Salman Rushdie addressed a crowd at Columbia University and gave a speech adapted from an essay that was based on a metaphor he said now defined his life.

Reading it now, I found it chilling and prescient.

The metaphor is a familiar one. A group of people is traveling in a hot air balloon. It springs a leak. The balloon can only carry one person safely. Who lives? Who is pitched overboard? How do they decide?

“I have now spent over a thousand days in just such a balloon; but, alas, this isn’t a game,” he said, noting other travelers, like actual hostages, who shared his plight. “This isn’t so much a balloon, I’ve wanted to say, as a bubble, within which I’m simultaneously exposed and sealed off.” He talks about fear, despair, and being separated from the communities which make up his identity and inspiration. “[H]as it really been so long since religions persecuted people, burning them as heretics, drowning them as witches, that you can’t recognize religious persecution when you see it?”

Rushdie was critically wounded last Friday when a man rushed onstage at an event held by the Chautaqua Institution and stabbed him numerous times. The attacker, a man named Hadi Matar, has been charged with attempted murder, though police have not confirmed a motive. Rushdie is slowly recovering from his wounds, but it was a very close call.

Rushdie had been living under a fatwa ordered by Ayatollah Ruhollah Khomeini since 1989, which directed Muslims around the world to kill him for his 1988 novel The Satanic Verses, which some deemed to be blasphemous for its depiction of Islam. After decades of intermittent exile and threats against himself, booksellers, and his associates, the attack still came as a surprise, almost as if we’d all gotten used to the sound of air slowly leaving his balloon, thinking it would never actually crash.

I would like the extend the metaphor to include other people currently riding in a doomed balloon, waiting to be cast over.

In addition to the novelists, poets, and essayists who are increasingly being added to banned book lists, there are also teachers, librarians, educators, and administrators who are living under a hazy array of threats coming from the public, hate groups, politicians, and the media, often mobilized by “worried parents.”

Teachers are taking to TikTok to get real about their lives, an always-on testimony about low pay, no respect, COVID fatigue, and the unintended consequences of new legislation designed to excise race, gender, and inclusion from their resources and methods. After Tennessee passed a law requiring teachers to catalog all the reading material in their classrooms for a lengthy review process, one exasperated teacher posted a video of herself spending a Saturday trying to document her overflowing classroom library. “The kids in here are asking me, ‘can I get a book?’ and I have to say no,” she said.

Some 40% of administrators reported verbal or threatened violence from parents during COVID, according to an extensive survey from the American Psychological Association. (One helpful human resources website encouraged educators to “buddy up.”) There were 249 shooting incidents in schools last year, and so far, some 152 so far this year. “The grocery store has better security than our public schools,” said one teacher in the APA study.

Librarians are being reported to police as pedophiles. Reuters found 220 examples of school boards receiving death threats. One school counselor who presented to her peers on ways to support trans and nonbinary students was later harassed on social media, called a “groomer” and “pedophile” by strangers. Parents in one Illinois school district are submitting Freedom of Information Act (FOIA) requests, demanding the gender identities of school personnel.

So, people are jumping out of the balloon on their own.

According to data crunched by the Wall Street Journal, roughly 300,000 public school educators left the field between Feb. 2020 and May 2022, and about 55% of teachers surveyed by the National Education Association say they are planning on leaving soon. The American Psychological Association survey showed similar numbers, with more LGBTQ+ staffers more likely to say they’re ready to walk.

Now, the cracks are showing.

Florida is about 9,000 teachers short this year. Bizarrely, Governor Ron DeSantis took to Twitter to invite veterans to teach in Florida schools, saying that teaching requirements have been “too rigid.” Teachers in Texas are leaving in droves, citing low pay, feeling undervalued, health and safety concerns, and culture war pressures. As a result, some districts have instituted four-day school weeks.

This is a bad way to go into a new school year, and it’s a worse way to live.

We should talk about free speech and education. We need to know the terms for movements that seek to control the information the public consumes and learn the predictable outcomes when people are attacked based on their identities. We might want to get clear on how a democracy should work, too.

But it’s unlikely that wide swaths of the future workforce will be able to do any of this if there’s nobody left to repair the balloon.

The trouble with voting data Can you guess? Yes, it’s about race. Steve Phillips, reporting for the Nation, says despite the overwhelming evidence that race (and related policy interest) is a central factor in voting behavior, racial data is rarely considered in electoral analysis, projections, strategy, and planning. He cites Nate Silver’s FiveThirtyEight, a primary source on data-driven election predictions, as a prime example. He describes Silver’s published methodology as vast, “spanning pollster ratings, congressional election forecasts over the past several years, and, among other things, a statistical analysis of 381 paintings featured in the Bob Ross show, The Joy of Painting,” but nothing about race and elections.
The Nation

LinkedIn nudges inclusion A new addition to the platform’s recruiter tool will alert employers of the gender ratio of a talent search, and then provide suggestions for how to make a job posting more attractive to female jobseekers. “For example, if you’re hiring for an electrical engineer, Diversity Nudges might suggest adding skills such as data analysis, analytical skills, and Simulink to increase the number of women electrical engineers in your candidate search,” LinkedIn wrote in its announcement. The tool also lets companies tout their ESG commitments, too. Nudge, nudge.
Fortune

History helps explain the racial wealth gap According to a new poll by NPR, the Robert Wood Johnson Foundation, and the Harvard T.H. Chan School of Public Health, white adults are more than twice as likely as their Black and Latinx peers to get sizeable financial help from their parents to buy a home or fund a business or education. Segregation, redlining, and restrictive covenants play a huge part—and goes back to the racist restrictions in the Homestead Acts during Reconstruction.
NPR

This summer, the American Association of Medical College released a new report called Diversity, Equity, and Inclusion Competencies Across the Learning Continuum. The Wall Street Journal responded with a series of editorials mocking the new “woke” medicine.  “America faces a looming and severe doctor shortage as baby boomers retire. It won’t help attract prospective doctors to tell top students they must attend to their guilt as racial and political oppressors before they can diagnose your Wall Street Journal

The story of the Satanic Verses, also known as the Story of the Cranes (قصة الغرانيق), is itself a matter of some debate in Muslim scholarship. At the root of the story is that the Prophet Muhammad mistakenly believed the whispers of Satan to be a divine revelation, and later withdrew related verses from the Qur’an; University lecturer, author, and early Islam scholar Ahab Bdaiwi has a helpful Twitter thread here. More here and scholarly work below.
University of Oxford

"You do not want to — in the choice between freedom and government protection — choose protection. Let me tell you about the Suppression of Crimes Act… something Jamaica instituted, and the middle class and upper class totally went along with that because they figured we are not criminals… But then a dissident article became a crime. Then a news story critical of the government became a crime. So suddenly, all these journalists and opposite parties start getting arrested, including my first creative writing teacher. He got really beaten up severely. Because the problem with choosing protection is that the definition of a threat keeps getting redefined."