These Gen Z crypto investors lost as much as 6 figures in the crypto crash, but they’re doubling down on their investment 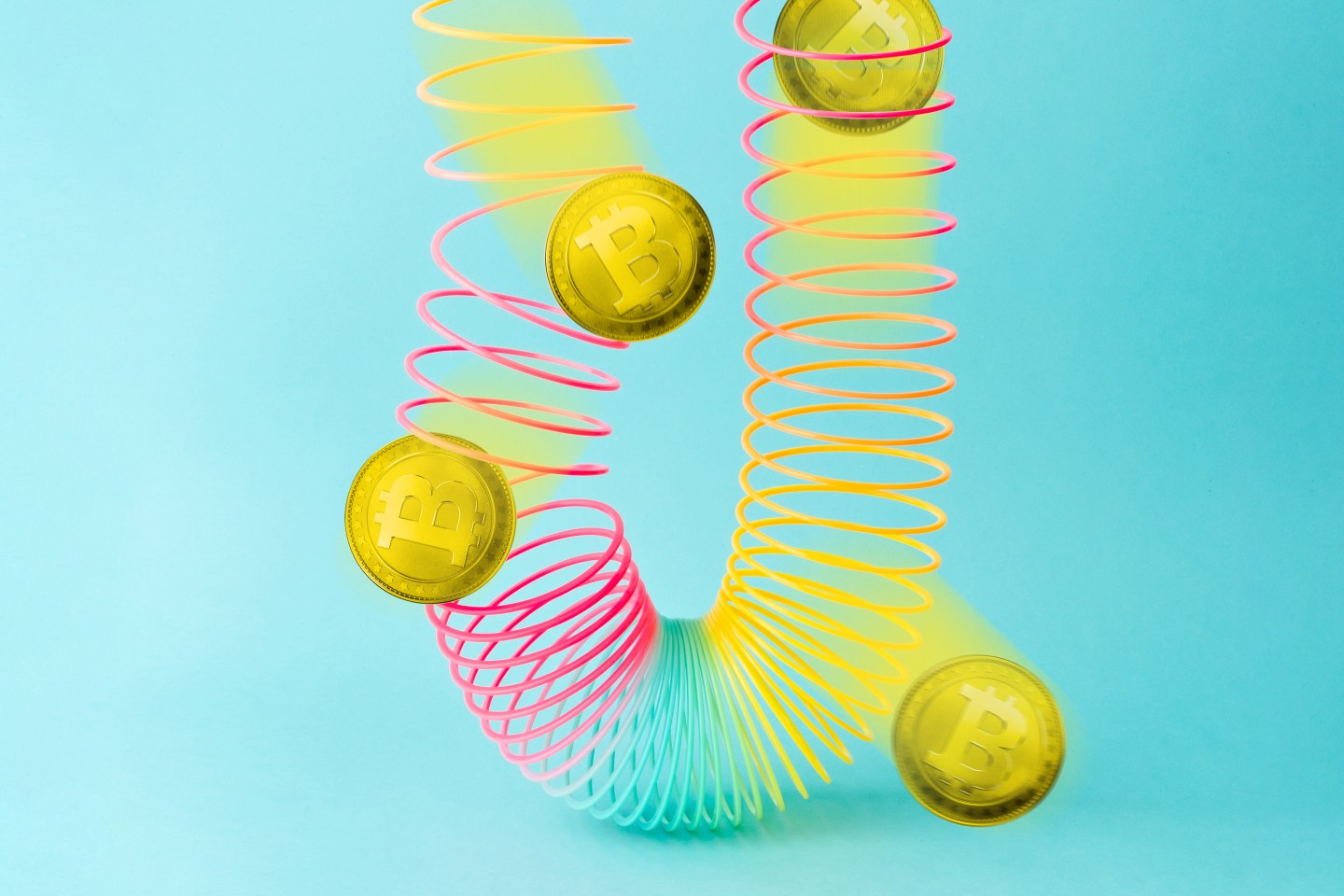 When Eric Sullivan first bought cryptocurrency, he went all in. Sullivan is from Denver, Colo. and was attending the University of Denver in the spring of 2020 when he invested all his earnings from an accounting internship, $20,000, in digital assets, including Bitcoin, Ethereum, and XRP coins. “I had saved up a good amount of money, and I just dumped it all in,” he explained. “I bought in fully, and it was like alright, this is cool. I just liked the idea of it.”

Sullivan, along with the rest of Gen Z crypto investors, excitedly watched his investment climb higher and higher by the day—until it didn’t. The crypto market implosion began in May when the coin TerraUSD crashed, starting a chain reaction of various cryptocurrencies crashing and companies laying off staff, or shutting down altogether. What was a three trillion dollar industry in November 2021 is now a one trillion dollar industry.

Sullivan, who is now 25 and is working at a distillery in Crested Butte, Colorado, didn’t take out any profits, and estimates he lost hundreds of thousands in valuation when the crypto market crashed. “I was like, well, f–k it, you know, I kind of blew that, but whatever,” he said. “Overall, it’s like water under the bridge.” Despite the initial disappointment, he is still a true believer in crypto.

Reflecting on the crash, he explained that he doesn’t feel like he lost “real” money, since he still owns the assets that plummeted in value. He added that since he’s young and doesn’t have financial responsibilities that come with supporting a family, he doesn’t think the money was a necessity. Looking ahead, he still plans to put the majority of his investments in digital assets—to him it’s an obvious decision. “I think it’s absolutely the future,” he said. “I think the technology’s there.”

Gen Z, which includes people born between the mid-1990s and the early 2000s, in many ways drove the crypto boom, and they fell the hardest when it crashed. Beyond the allure of making fast money, social factors also drove young people to crypto. “The history of crypto is really born out of people not trusting central banks and financial institutions who were basically bailed out for what they did in the 2008 recession,” explained financial advisor Douglas Boneparth. “Crypto [represented] freedom to a lot of people,” he said.

The volatility of digital assets also presented an opportunity to make money outside of wage earning. “The economic opportunities that our parents had and our grandparents had for social and economic mobility are just not there for young people [today]. That means that you have to take risks if you want to try to get ahead. I think a lot of people viewed crypto through that lens,” said Policy Director at Duke Financial Economics Center Lee Reiner.

How much did young investors lose?

As the cryptocurrency market imploded this past spring, seasoned experts weren’t shocked given the asset’s inherent volatility. Yet for many young investors, some of whom are still in school or working part time, the extent of their losses came as a surprise.

“​​They were lied to by sophisticated actors, by people who knew better,” said Reiner. “It’s always those who can least afford it who are left holding the bag in the end whenever there’s one of these bubbles or scams because the smart money gets out before it before it collapses,” Reiner said. Indeed several platforms that advertised copiously as secure such as Celsius and Voyager Digital declared bankruptcy and froze customer deposits this summer. Voyager is now facing lawsuits from customers who claim that the platform mislead investors and Celsius is being sued for engaging in fraudulent activities by a former investment manager.

To many, the crash has illustrated that the crypto market does not truly stand independent of the stock market and is susceptible to the very same setbacks that made many young Americans wary of Wall Street. Yet the young investors I spoke to were overwhelmingly still invested in crypto—both literally and figuratively.

Not giving up on crypto

Josten Perez started buying cryptocurrency when he was in his first year at Hamilton College in 2018. His first exposure to digital assets was the meme-coin Dogecoin. He and some friends in Posse, which is a college entrance program, bought a few Dogecoins when the coin was in its infancy. While he sold his Dogecoin at a few hundred dollars before the coin truly exploded in value, the experience was exciting.“The mission [of digital assets] is to give people this notion of agency and promote this environment of decentralization. I’m Puerto Rican, me and my parents, we’ve grown up in poverty my whole life. So, when you see something that can dramatically change different financial institutions and instruments, for me that is why I like crypto,” Perez explained.

Throughout college, he used his funds from his job at school to invest in cryptocurrency. When it crashed, he said he lost an estimated $15,000. Yet unlike Sullivan, he took out much of his money in Ethereum before the crash so was able to save a substantial amount of his gains.

Josten Perez started buying cryptocurrency when he was in his first year at Hamilton College in 2018.
Courtesy of Josten Perez

As in most crashes, even the most high profile investors weren’t immune. Brian Jung, who is 23, has 1.5 million subscribers on his YouTube channel that covers a range of personal finance topics including cryptocurrency. He is also an investor and started buying cryptocurrency in 2015. He explained he’s down multiple six figures in valuations from his digital assets from the crash. He also had put $30,000 dollars in Celsius before it went bankrupt in mid-June. “When that happened, I felt like a viewer or just any other investor. This is money that I worked hard for that I can’t get out. I know for my viewers that this has happened to them, too,” he explained.

Jung explained that about four weeks before Celsius crashed, founder Alex Mashinsky reached out to him asking to be interviewed on Jung’s channel. At the time, Jung declined because he generally doesn’t promote specific business ventures on his channel, but not because he thought something was amiss with Celsius. “When he reached out, I didn’t think he was reaching out because he wanted to save the name or try to do damage control before that happened,” Jung explained.

Yet for Jung, who has made millions from YouTube, the crash doesn’t affect his access to liquidity or his day-to-day life. While he understands why many of his viewers are devastated by the crash, he advises them to hold on to their assets and wait for the market to turn around. “While we did have that huge crash, I think the crash is still overall good for the market. If we want to grow to the potential of crypto, we need all these scams and these pyramid schemes to go away. It’s unfortunate because at the end of the day, the people that really get hurt are the investors, the retail guys,” Jung said.

Jung said that his cryptocurrency content on YouTube is getting fewer views in the past months since the crash, which he interprets as many retail investors losing interest after taking some losses. Yet the viewers who have stayed are “crazy bullish” according to Jung. “If I even say anything semi-bearish or even neutral, they’ll step in and be like, ‘No, Brian, like crypto is gonna stay.’ They are firm believers,” Jung said.

What role does crypto have in a responsible investing strategy?

The question that remains for many: is investing in crypto a good idea? Left unprotected without comprehensive regulation, young crypto investors are prime targets of rampant scams, misinformation, and ponzi schemes. Even with improved regulation that many hope is coming, the asset is inherently volatile.

Reiner is doubtful that any cryptocurrency is a useful investment. “For cryptocurrency to have any value over the long term, it needs to provide genuine economic utility to people. It needs to improve upon some product process service in the real economy and we just haven’t seen it yet,” Reiner explained.

While not all cryptocurrencies will survive, Boneparth thinks digital assets as a whole are here to stay. Boneparth said that a five to ten percent allocation in a diversified portfolio would make sense for a lot of people interested in getting exposure to digital assets. According to Boneparth, Bitcoin is the option that look like it has the most staying power. Reiner said he wouldn’t advise anyone interested in cryptocurrency to allocate more than five percent of their portfolio. “​​If you have the financial ability to take risk and the willingness to be on a wild ride, then sure, go ahead and allocate,” Reiner said.

Yet despite the chaos that comes with the asset, many young investors are as committed as ever. “There’s still a lot of money and talent and interest in this space. Those people are going to continue to build and maybe on the other end of it, you will see something that’s genuinely economically useful. I just don’t see it happening,” Reiner said.

Perez isn’t just investing money into crypto now, but has made the space part of the first step in his career. Perez now works as a client services manager at the cryptocurrency workspace in SoHo, Empire DAO. He still invests in cryptocurrency, and while he has criticisms of the hypercapatalistic mindset that he sees in the industry, he is broadly still bullish. “You know, now the money is down, and I actually have a job, I’ll be buying way more,” he explained. “I still think that the real money in crypto hasn’t even been made yet, he said. “And for me, again, it’s not really about the money.”