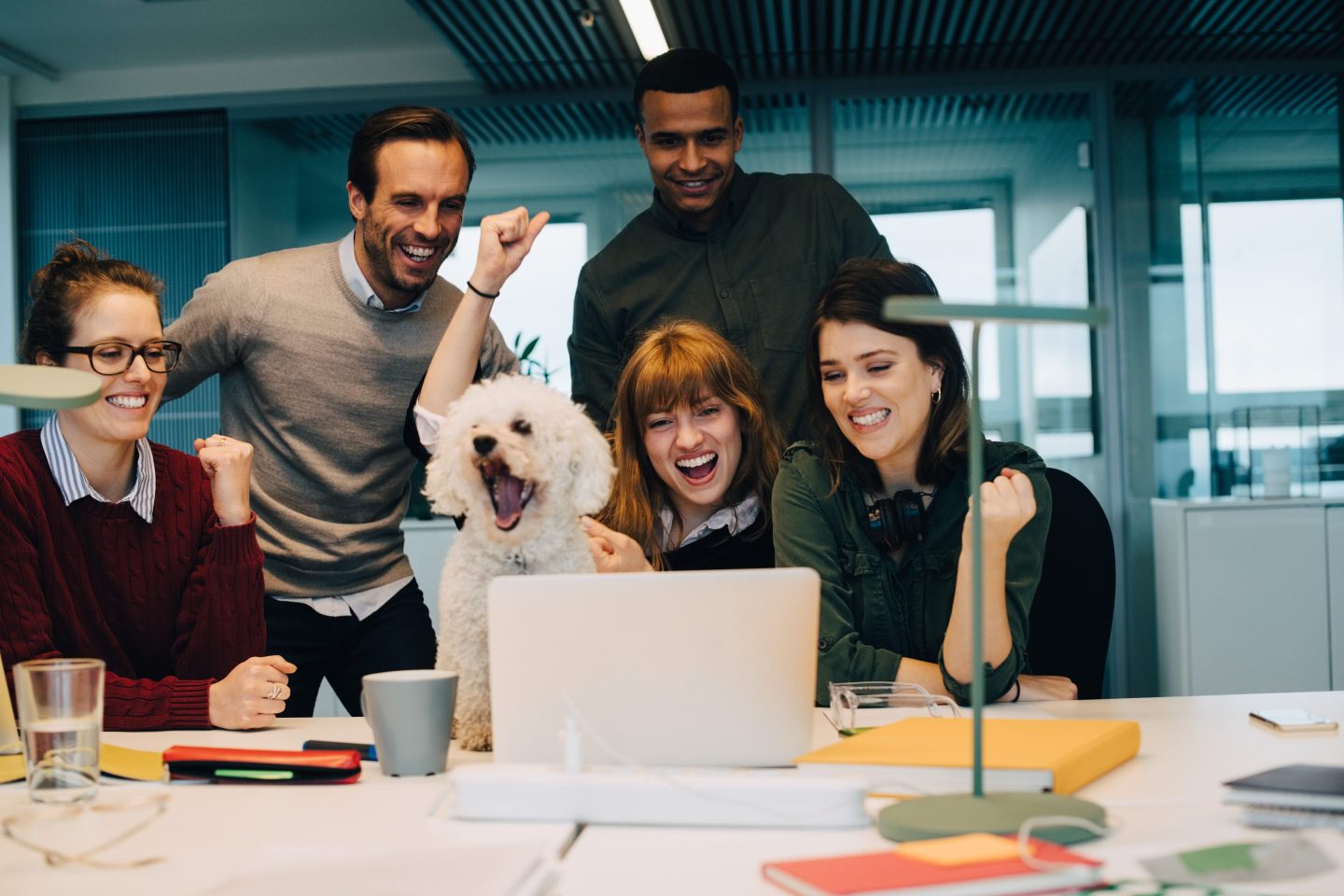 More workers want a dog-friendly office, and some bosses are delivering.
Maskot/Getty Images

The number of searches for jobs in dog-friendly offices shot up by 42% from June to July, according to research from flexible jobs directory Flexa Careers, which analyzed 36,000 user searches. Lucky for them, the pickings aren’t too slim; the number of job posts advertising dog-friendly offices increased by almost a quarter (23%) over the same period.

It seems that many people in the 23 million American households who have added a cat or dog since March 2020 are having a hard time parting with their four-legged friends—and bosses are using it as an opportunity to get workers back to their desks.

The workplace is starting to see the long-term impact of how pandemic pet owners have restructured individual priorities, Molly Johnson-Jones, Flexa Careers CEO, tells Fortune. She says bringing a dog to work can be beneficial for all parties involved: the owner, the dog, and even coworkers. Owners save money that would otherwise go to walkers or day care, she says, and dogs don’t become lonely.

“It can also bring happiness to teams,” she adds. “Dogs aren’t everyone’s cup of tea, and the preferences of coworkers should always be respected. But I know that on our team, having dogs around makes for a happier workplace.”

It’s hard not to be your real, human self around a dog, Johnson-Jones says, which means dogs can eliminate “a lot of the corporate stuffiness” that makes being in the office a drag. “Modern-day workers want to feel like themselves at work, and sharing the space with pets can help make that easier.”

Companies are taking the furry hint

In a last-ditch attempt to win the return-to-office war, allowing employees to bring dogs into the office is also a way for bosses to eliminate one excuse to work from home; an April survey by Fi, a company that manufactures GPS-enabled dog collars, found that 71% of U.S. dog owners would take a remote job over an in-person one just to be with their dog.

“Dogs are just a great complement to our associates and our guests, and they actually even sometimes act as ambassadors…to really welcome guests to their new home as they’re traveling,” Sage’s chief operating officer, Daniel del Olmo, told the New York Post.

Sage is hopping on a bandwagon that’s been growing for years. Some tech companies, like Google, Amazon, Uber, and Salesforce, were pet-friendly long before the pandemic. Even the most traditional executives are beginning to taking note. Half of C-suite executives surveyed last year by Banfield Pet Hospital said they’re planning to allow pets at the office going forward, mostly because of employee requests.

That said, employees who are insistent that their dog needs companionship more than they themselves do may be overestimating things.

Any pet can experience separation anxiety, Patrick Mahaney, a house-call veterinarian in Los Angeles, told Fortune in May, but it’s not nearly as big an issue as many owners believe. “Owners think their pets have more anxiety now, but that’s overblown,” he said. “We haven’t observed it.”

Perhaps owners are the ones with separation anxiety.