One less excuse for avoiding the office: Your dog might not care if you’re gone, vets say 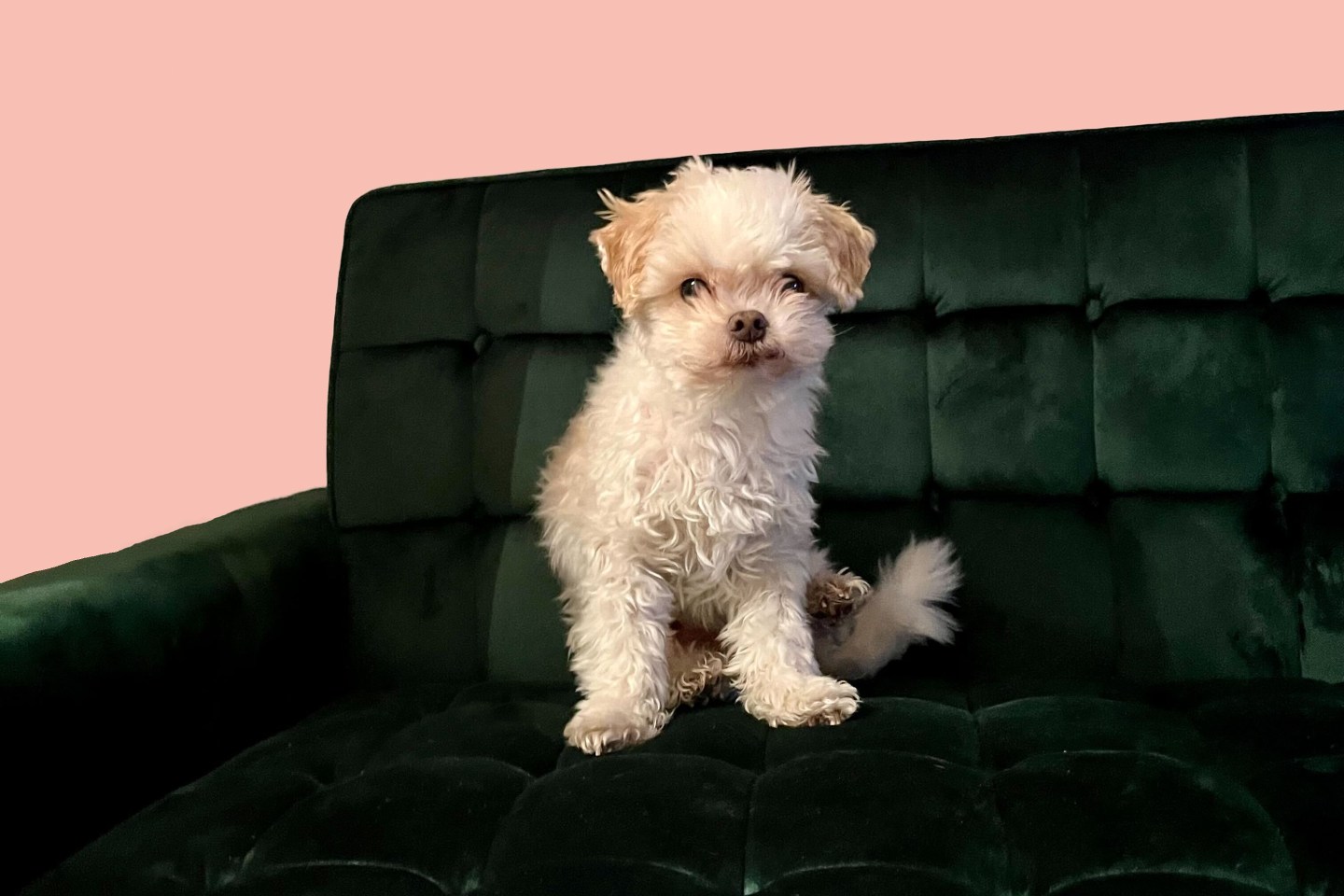 Teddy, the author's geriatric poodle mix, who has no strong opinions at all.
Courtesy of Jane Thier

I got my dog Teddy, a mini poodle mix, at a time of unprecedented economic uncertainty and national turmoil. My family was eager for some levity, an excuse to get more fresh air, and a reason to interrupt the anxious hours spent glued to their screens.

It was spring 2009, and we were deep into the Great Recession. Teddy was my 12th birthday present.

Nobody in the family wanted Teddy quite as much as I did. Despite my insistence that I’d do all the pet care, my parents remained unmoved. “What happens when you go to college?” they asked me. “Who will do the late night walks?” As a sixth grader, I thought this was crazy—who thinks so far ahead?

They probably had a point. I’m 25 now; Teddy is 13, still kicking and still needing four walks a day.

Early in the pandemic, I watched countless friends and coworkers pay a visit to their local shelter, breeder, or pet store, looking for the same joy Teddy sparked during the last national crisis. But dogs, of course, aren’t good presents, and they are not short-term commitments.

I did keep my promise, caring for Teddy until I left for college in 2015, at which point my parents took over. But in the summer of 2020, when I moved into a dog-friendly studio apartment, they suggested it might be time for me and Teddy to reunite. I was working remotely, they were both in the office part-time. My 12-year-old self did promise to be his caretaker forever. Wasn’t it time I took back the leash?

So that’s how it’s come to pass. For the past two years, my recession pup has been a loyal and constant companion. I walk him first thing in the morning, again during my lunch break, after I sign off at 5, and then once more before bed. In his golden years, he spends pretty much the rest of the day dozing.

I’m able to give Teddy this amount of attention because Fortune hasn’t yet mandated a return to the office. When that day comes, I suppose I’ll hire a dog walker, but in Washington, D.C., where I live, a 30-minute walk could run me anywhere from $18 to $30. That’s not cheap, especially for Teddy, who’s 91 in dog years and walks at a leisurely pace.

I’m hardly the only owner in this predicament. Since the initial lockdowns, approximately 23 million American households have added a cat or dog, according to research from the ASPCA. Indeed, these animals—and their owners—have grown accustomed to a certain level of companionship. How will these pets fare when more people return to the office?

Any pet could experience separation anxiety, Patrick Mahaney, a house-call veterinarian in Los Angeles, tells me, but it’s not nearly as big an issue as many owners believe.

“Owners think their pets have more anxiety now, but that’s overblown; we haven’t observed it,” he says. “I often see anxious dogs owned by anxious owners who over anthropomorphize them and don’t treat them like dogs.”

But all this projected anxiety is certainly good news for Wag. The pet care app saw 270% year-over-year revenue growth last quarter, its CEO, Garrett Smallwood tells me. Wag offers dog walks, anywhere from 20 to 60 minutes long, boarding, and training, and 400,000 caregivers across the U.S. are on the app.

“The early months of the pandemic were not kind to us,” Smallwood says. “No one needed a dog walker for a long time, but last fall, as the world reopened, we slingshotted out.”

Pet parents, maybe more than pets, can be sensitive, he acknowledged.

“COVID has offered a once-in-a-lifetime opportunity to realize pet needs are so unique,” he says. “When you spend a year or two full-time with your pet, you become really attuned to their needs and wants. So obviously you want to do right by them.”

Some people are even taking their pets into consideration when making decisions about their careers. An April survey by Fi, a company that manufactures GPS-enabled dog collars, found that 71% of U.S. dog owners would take a remote job over an in-person one to be able to effectively look after their pet.

As companies look for ways to encourage reluctant employees to return to the office, more and more are offering the opportunity to bring pets to work.

In a survey conducted last year by Banfield Pet Hospital, half of C-suite executives said they’re planning to allow pets at the office. Most of them said they’re making the change because of employee requests, admitting it’s a move to coax employees back to in-person work. Some places, like Google, Uber, and Salesforce, were ahead of the curve, having offered pet-friendly workspaces for years.

Provided the commute isn’t stressful and the workplace is calm, Mahaney says, it’s perfectly fine to bring dogs to the office. Of course, you’ll want to make sure your dog is a good colleague.

They should be healthy, spayed or neutered, and well-socialized dogs who really enjoy meeting new people and other dogs and exploring new environments, says Dr. Carly Loyer, research manager on the ASPCA Behavioral Sciences Team. On the other hand, pets with underlying behavior issues, like anxiety, may be overwhelmed by visits from their owner’s coworkers or by regular office sounds like the printer or people shifting their chairs.

But if your office isn’t inviting your four-legged friend along—or, like me, you know you’d spend the whole workday frantically making sure he isn’t peeing on the company carpet—it won’t be the end of the world for your pet to have some alone time.

Preparing for the transition

The process of acclimating a dog to spending the workday alone should be gradual, Mahaney advises. In the weeks leading up to your return to office, practice leaving for longer spells. Give dogs a treat, praise them, and sneak out for a moment. Then come back, and praise them again. Gradually extend that interval until it can stretch a few hours—with no drama on the part of the dog or the owner.

If leaving your dog for long stretches is still posing a challenge, Mahaney suggests you can get a monitoring device that allows you to communicate with your pet with your voice and even give them treats.

Loyer acknowledges that some dogs might have a tough time with the transition.

“Pets that didn’t mind being left alone before the pandemic may be left confused and lonely once work commences again,” she says. “It’s not uncommon for any major change of routine to be stressful for our pets, much less one as drastic as the transition from having their owners around all the time to having long periods alone.”

If you know you will be resuming a rigid schedule, adopt it now while you’re still home. Plan walks and meals for the same times as when you return to work, Loyer says. She also recommends leaving on soothing music or TV for some auditory and visual stimulation.

And, if your dog has gotten used to midday play sessions or walks, change the playtimes in advance so they will fit your new schedule.

Common signs of anxiety to watch out for include nervous pacing, trembling, change in body language (like a furrowed brow or a low tail), or whining when you prepare to leave, Loyer says. These are signs of real distress, and they could mean your pet is about to engage in destructive behavior once you’re gone, like tearing sofa cushions or pooping inside.

Of course, this isn’t the case for every dog—or even most dogs. Teddy, for instance, didn’t stir once during my phone calls with Loyer, Mahaney, or Smallwood. For those with still-restless pandemic pups, that might be the real secret: just wait it out for a decade.

And if any parents reading this are negotiating with kids who are begging for a pet: Make sure to get your 12-year-old’s vow of lifetime dog walks in writing.