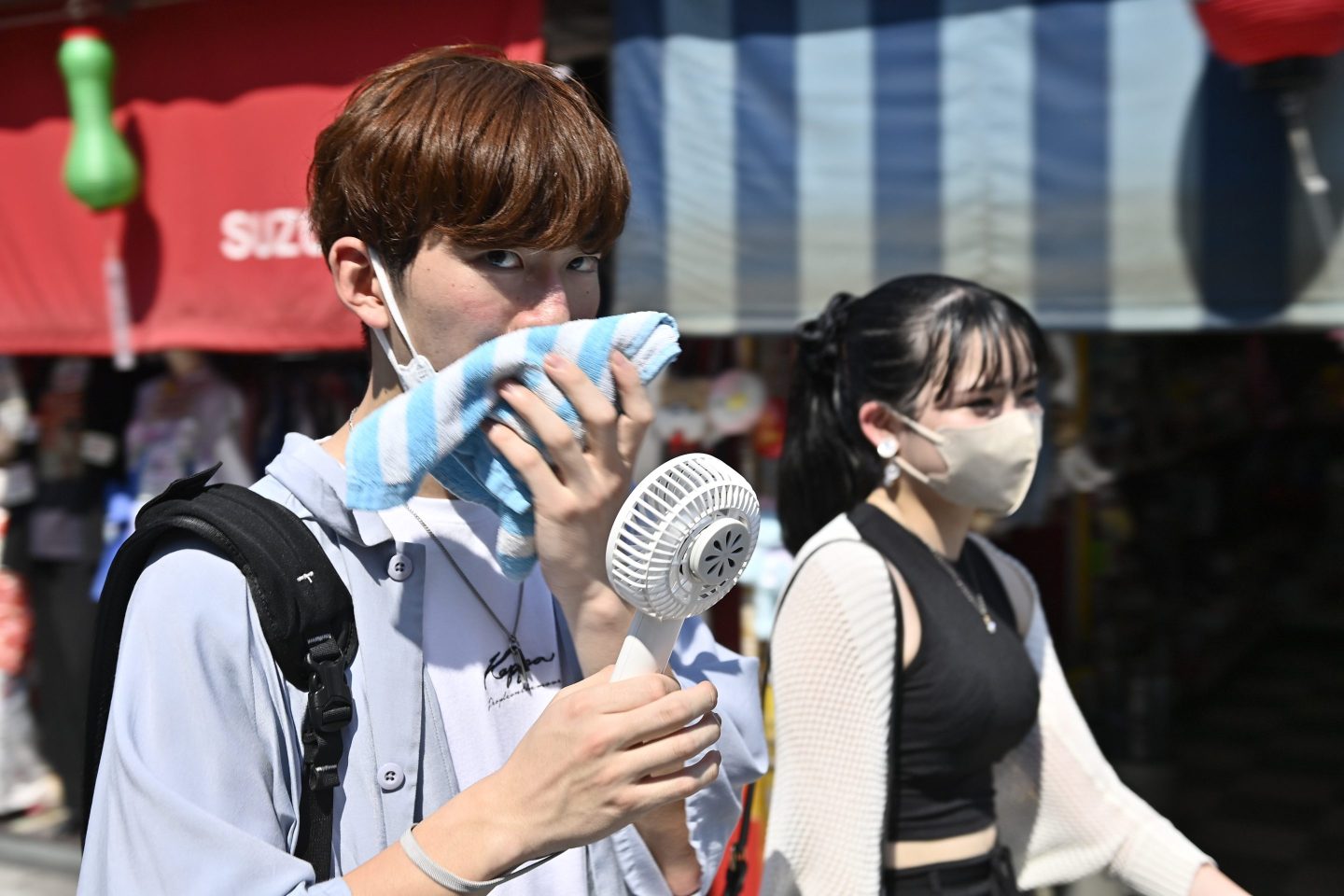 A man walks on the street using a towel and a portable fan to protect himself from the sun and the heat on June 30 2022, in Tokyo's famous Asakusa district in Tokyo, Japan.
David Mareuil—Anadolu Agency/Getty Images

And it’s not just in Europe and the U.S. where people are suffering through one of the hottest summers ever. Japan has seen one of its hottest summers on record this year, leading to thousands of hospitalizations for heat-related medical issues.

Some Japanese insurance companies are taking advantage of the situation, offering daily coverage for consumers who are worried about heat stroke.

Sumitomo Life Insurance began its heat-stroke insurance plan in April. It can cost just 100 yen, or 73 cents, for coverage that can be purchased on a day-to-day basis and covers medical costs caused by excessive heat. Sumitomo’s plan was the first of its kind in Japan, a company spokesperson told Bloomberg.

The company saw an incredible 1,600% increase in the sales of its daily heat-stroke coverage during the final week of June from typical levels, The Japan News reported. The rise came during a week when Japan’s heat wave was so bad that Tokyo saw a six-day streak of 95-degree Fahrenheit plus days, the longest since 1875, and more than 14,000 people were hospitalized with heat-related medical issues.

Sompo’s heat-stroke insurance plan was released after the worst of the heat wave, on July 6. It pays policyholders if they are hospitalized, have surgery, or even die as a result of excessive heat exposure. Demand for the plan has been higher than the company anticipated, Sompo spokeswoman Shoko Oda told Bloomberg.

Japan’s heat wave has been so bad this summer that Japan’s Meteorological Agency was forced to call an end to the country’s annual summer rainy season earlier than in any year since the agency began keeping records in 1951.

Japan’s health ministry, which is known for being conservative, also told consumers that they didn’t need to wear face masks outside due to the increased risk of heat stroke.

“Unless they are having close conversations, we urge people to remove their face masks if they are commuting to work or school on foot or by bicycle, or when they are walking, running or doing radio gymnastics and other exercises,” health minister Shigeyuki Goto said at a June 21 news conference, The Asahi Shimbun reported.

The ongoing heat wave in Japan has even put pressure on the country’s electrical grid. Japan imports 90% of its energy needs, and with energy costs soaring worldwide, the government declared a three-month energy-saving period in June to try and avoid blackouts. Officials have requested that businesses make cuts to their power usage, and consumers set their AC units as high as 82 degrees and even turn off heated toilet seats to conserve energy.