Netflix turns Wall Street expectations upside down; stock surges as much as 8.5% after market hours on narrow subscriber loss 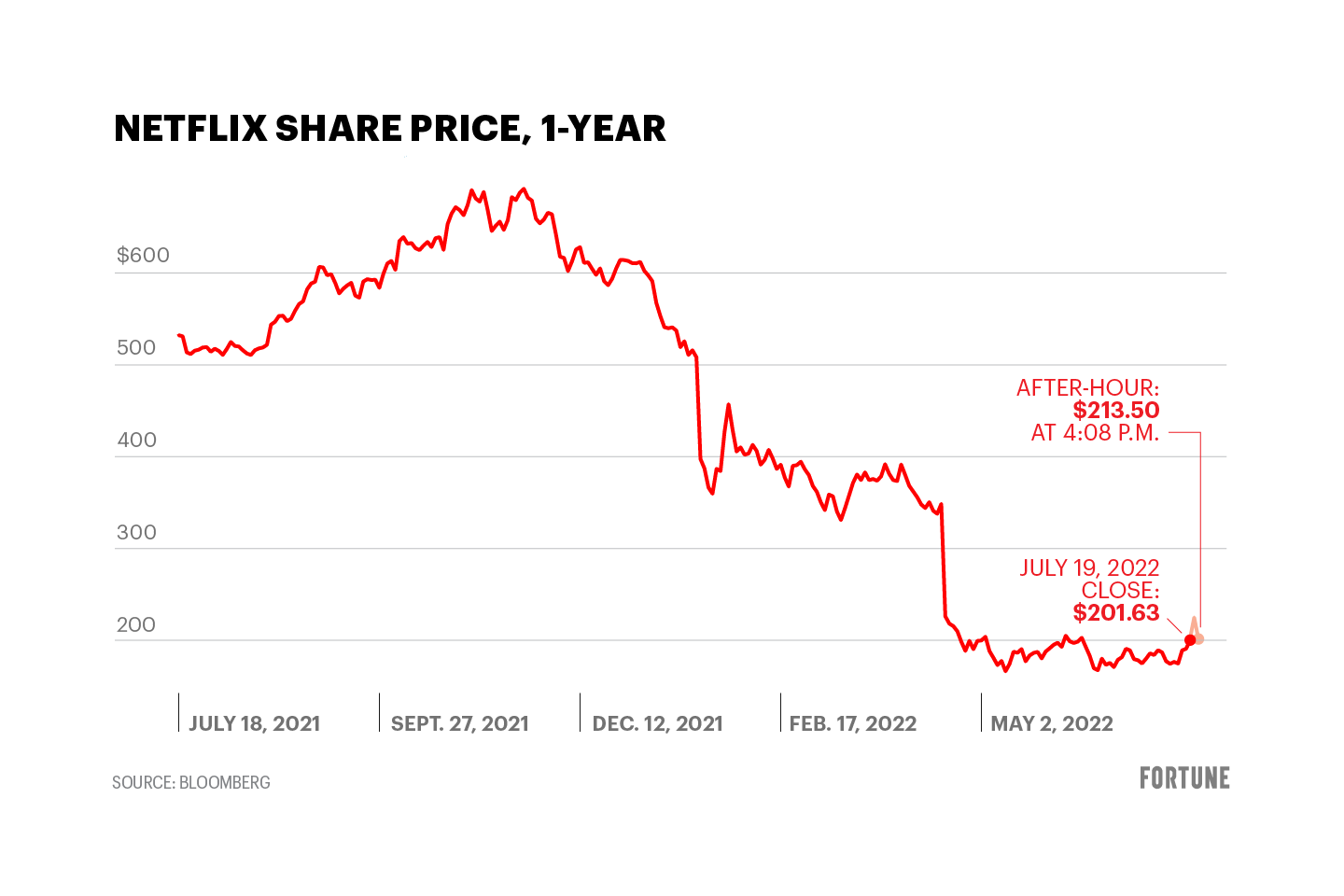 When most people think of Netflix, they imagine hit shows like Stranger Things or Ozark, not earnings reports.

But this week, all eyes were on the streaming giant’s second-quarter earnings.

Netflix has faced increasing competition in the saturated streaming market this year, leading it to lose 200,000 subscribers in the first quarter, when it warned that 2 million more could follow over the next three months.

Even though Netflix’s subscriber losses ballooned to 970,000 in the second quarter, the stock is up more than 8% in after-hours trading as the Street expected to more than double that.

The streaming giant managed to grow revenues by 8.6% year over year, while net income increased almost 7% over the same period. Earnings per share also came strong at $3.20, when the Street had expected just $2.94.

That’s called a beat, folks, and it means there’s life in streaming yet—and maybe a lot more than that. The stock rallied after hours by as much as 8.5% as the Street took cheer.

The strong dollar was an issue for Netflix in the second quarter, however, due to its overseas revenues. Without the losses from foreign exchange, Netflix would have posted 13% year-over-year revenue growth.

On a positive note, Netflix forecast that it will add 1 million subscribers in the third quarter, which should be music to investors’ ears after the disappointing guidance from the first quarter. Revenue growth, on the other hand, is expected to slow to just a 5% annual rate. That’s not exactly outstanding for a firm that was growing sales at a 16% clip in December of last year.

A leading indicator for the subscription economy?

Netflix’s poor performance so far in 2022 has left some questioning whether the firm’s business model could be ailing, and what that means for the subscription economy as a whole.

Subscription-based business models have exploded in recent years, and according to a 2021 UBS study, they could continue to boom from a $650 billion market in 2020 to a $1.5 trillion market by 2025.

Major companies around the world have leaned into subscription-based services, with some rolling out pretty unique offerings, including BMW, which recently began offering a subscription service for heated seats in its cars.

However, the rise of subscription-based business models in everything from content streaming to food delivery has some consumers feeling subscription fatigue, especially with inflation sitting at a four-decade high. That’s why Netflix’s shocking first-quarter results rocked Wall Street so much, leading to the largest single-day loss of any stock in market history.

Some 35% of Americans have canceled a monthly subscription in the past six months due to inflation, according to an April CNBC survey, and 36% of respondents said they plan to cancel subscriptions if higher prices persist.

The subscription market has also seen a few key misfires of late, including the blowup of CNN+, a news streaming platform that shut down less than a month after its launch.

Netflix’s recent move away from a reliance on subscription business also casts doubt on the viability of the business model as global recession fears grow and the cost of living continues to soar. As does the company’s decision to lay off 300 people in June after it let go 150 people in May.

The company’s executives have decided to roll out a cheaper, ad-supported version of their streaming services sometime during the fourth quarter of this year, and said in April that they plan to cut down on password sharing among subscribers.

Bank of America analysts, led by Nat Schindler, questioned the moves in a June 23 research note.

“We urge caution to the belief that Netflix will be able to use advertising to grow revenue in a vacuum,” they wrote. “The advertising ecosystem is large, complex, costly, and its competitors using ads have a several-year lead on them.”

The Bank of America team also surveyed 1,200 U.S. consumers in their report and found that over 65% of Netflix users would take a discount in exchange for watching ads. This could lead to the “cannibalization” of Netflix’s subscribers into what will likely be a less profitable ad-supported model.

“Ad-tiering could serve as a way for consumers across all income brackets to extend their streaming budget by trading down to subscribe to an additional service, benefiting Netflix’s competitors much more than Netflix itself,” the Bank of America team said.

On top of that, if a recession hits, Netflix is likely to see increasing “churn” or turnover in its subscriber base, BofA noted. That could be an issue for every major subscription model, but only time will tell if we’re nearing the end of the subscription businesses’ golden age.

Tuesday’s results show there may still be gold in those hills. Or at least, the downturn isn’t nearly as bad as feared.