Europe’s new normal: Scorching summer followed by ‘long, hard winter,’ as IEA tells it to cut Russian gas, or else 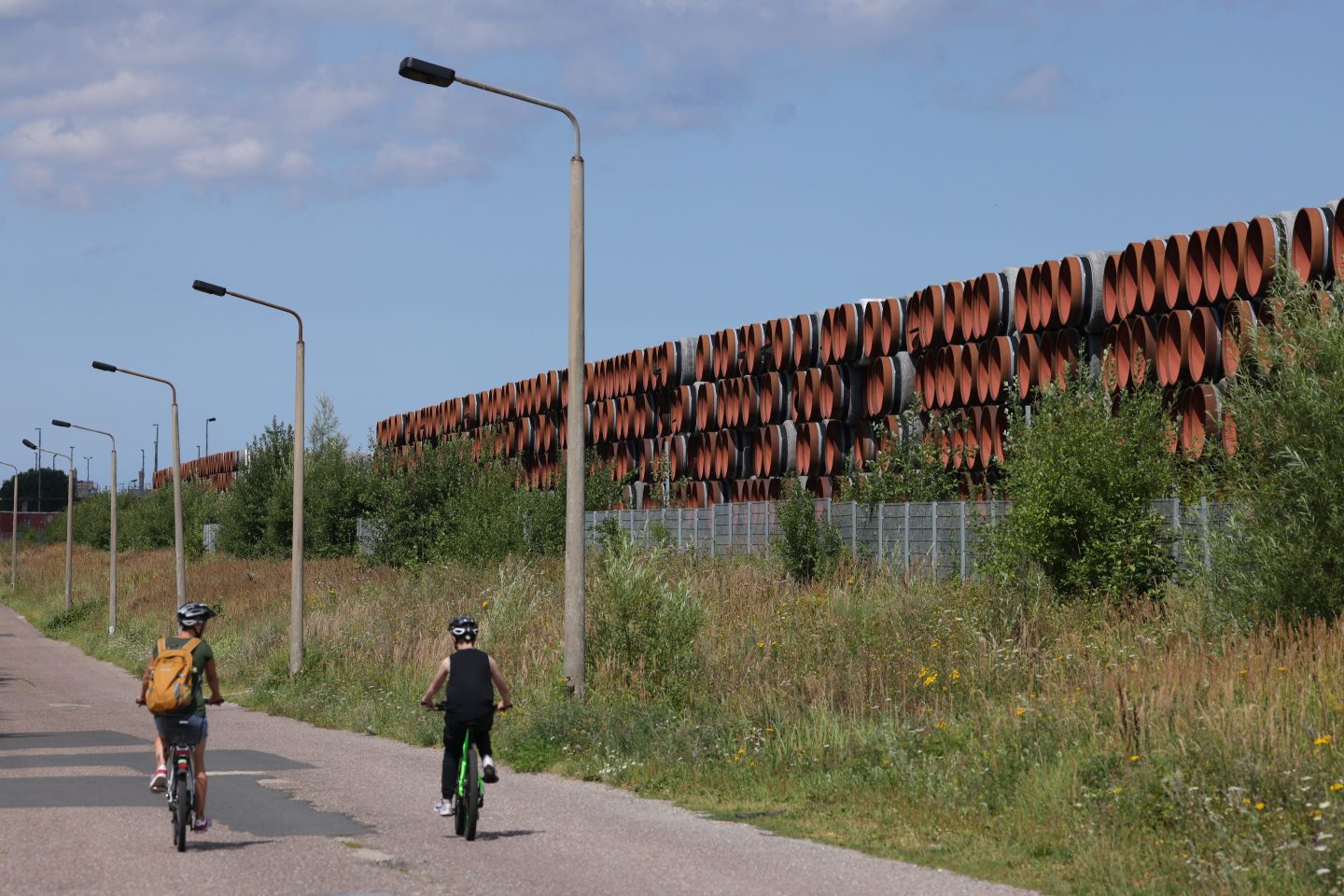 People on bicycles ride past sections of pipe for the Nord Stream 2 gas pipeline stacked at Mukran Port on Rügen Island on August 04, 2021 in Sassnitz, Germany.
Photo by Sean Gallup—Getty Images

As record heatwaves scorch Europe, forcing people to turn up their air conditioning, triggering wildfires and killing hundreds, the International Energy Agency (IEA) has a stark warning for the continent: cut gas consumption immediately or face a “long, hard winter” ahead.

But that might be easier said than done for Europe as blistering temperatures are forcing people to crank up their air conditioners, and the heat itself has hurt the ability of countries like France and Germany to increase their nuclear capacity and to get their regular fuel deliveries.

In a Monday report, the IEA—a Paris-based body that’s charged with ensuring global energy security—warned that the global energy crisis is becoming “especially perilous” in Europe as fears mount over a complete cut-off of Russian gas supply to the continent.

“As we get closer to next winter, we are getting a clearer sense of what Russia may do next. The next few months will be critical. I have been urging [European leaders] to do all they can right now to prepare for a long, hard winter,” Fatih Birol, the IEA’s executive director, said on Monday.

Gazprom, a Russian state-owned energy firm and the country’s largest, curtailed gas supplies to Europe by 60% last month, citing repairs to the Nord Stream 1 pipeline that transports Russian gas to Germany beneath the Baltic Sea. The European Commission, on the other hand, described Gazprom’s moves as an “instrument of blackmail” by the Kremlin to test whether Europe would stick to its sanctions against Russia over its war with Ukraine, even if it was threatened with the prospect of being unable to power its economy and heat its homes.

European nations are now scrambling to fill their gas storage tanks before winter’s intense energy demands set in, even while they try to cool households, extinguish wildfires and deal with potential power disruptions and warped train tracks due to the heat. EU’s gas storage sites are currently 64% full. Even if the EU’s gas storage levels reach 90%, countries still face a heightened risk for gas supply disruptions in the event of a wholesale Russian cut-off, the IEA warns.

Russia supplies around 40% of Europe’s natural gas. Last year, the country delivered 155 billion cubic meters of gas to the continent.

The IEA says Europe must dramatically slash its gas intake over the next few months, to prepare for winter’s energy demands.

“It’s much better to take steps now to prepare for winter, than to leave the well-being of millions of people and European economies [to] the mercy of the weather or… give extra leverage to [Russian] President Vladimir Putin,” Birol said.

The “first, immediate step” is to significantly reduce Europe’s current gas consumption—from both businesses and households—to ensure adequate gas storage levels before winter, the IEA wrote. EU nations need to save an additional 12 billion cubic meters of gas—enough to fill 130 liquified natural gas (LNG) tankers—over the next three months, according to the agency.

To avoid a significant supply disruption, the EU has moved to secure alternative energy suppliers. On Monday, the EU inked a new deal with Azerbaijan for at least 20 billion cubic meters of gas per year by 2027. But the IEA cautions that it’s not enough to rely on non-Russian sources of gas as these suppliers are “not available in the volumes required” to replace Russia’s missing deliveries. Even if gas supplies from countries like Azerbaijan and Norway flow to Europe at maximum capacity, the EU still faces a substantial risk of supply interruptions if Russia cuts off its gas completely.

The EU should temporarily increase the use of coal and oil-fired power generation, and renewable sources like wind, solar and even nuclear power, where feasible; and introducing auction platforms that allow industrial gas users to offer their supply in order to reduce gas consumption, according to the IEA.

In June, the German government made the “bitter… but simply necessary” decision to reopen shuttered coal plants to lower the country’s gas usage, Germany’s economy and climate action minister Robert Habeck said at the time. The country was aiming to phase out coal power generation by the end of this decade.

EU countries also must advance campaigns to encourage households to reduce electricity consumption, and set cooling standards and controls during the summer.

On Wednesday, the European Commission will announce additional urgent measures that countries will implement to curb gas consumption.

This winter could become a “historic test of European solidarity—one it cannot afford to fail—with implications far beyond the energy sector,” the IEA wrote.