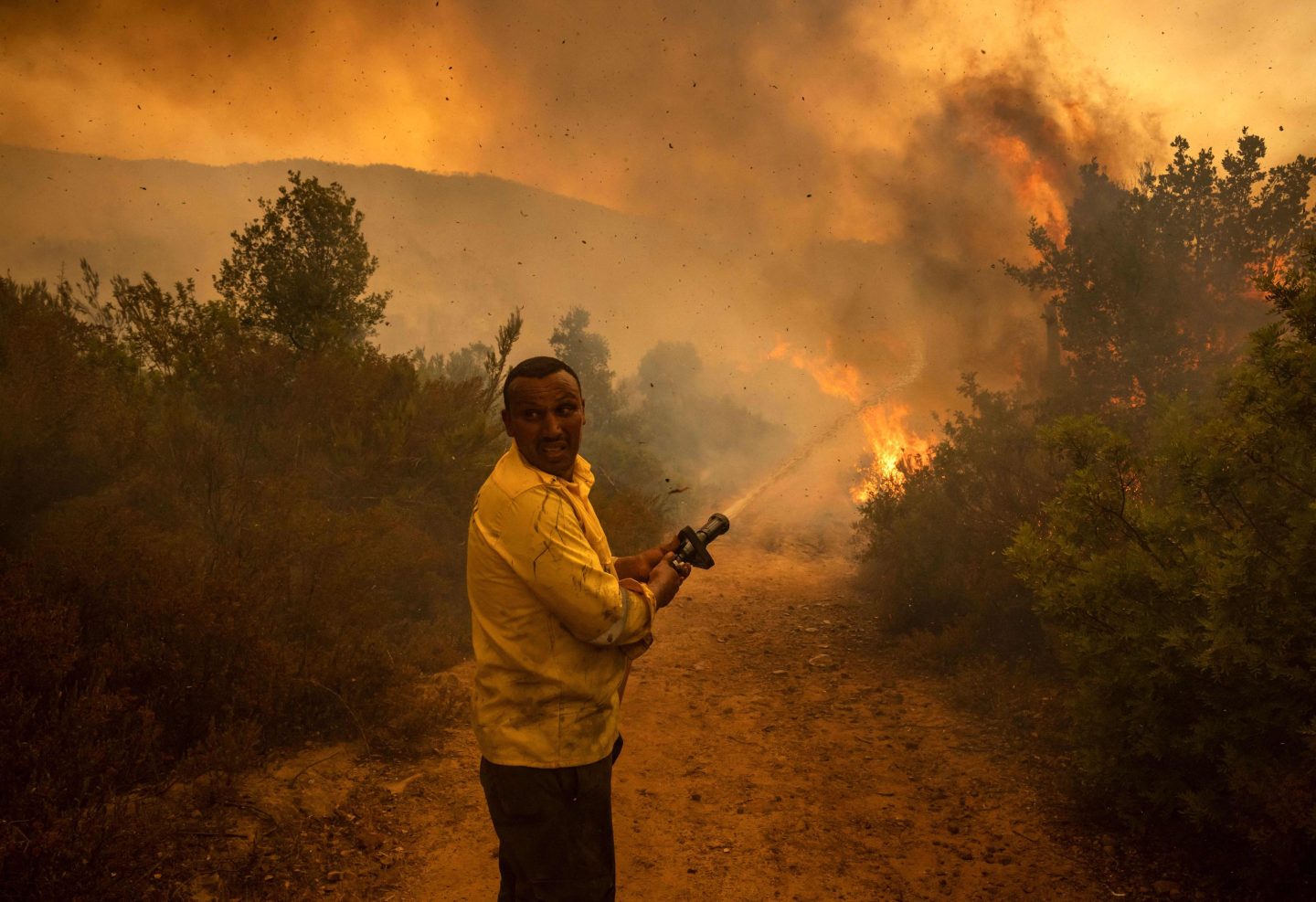 A forest ranger sprays water from a hose on a forest fire near the Moroccan city of Ksar el-Kebir in the Larache region, on July 15, 2022. (
Fadel Senna—AFP/Getty Images

As heatwaves scorch the U.S., Europe, China and other parts of the Northern Hemisphere this week, the head of the United Nations has a simple and scary message for the world: if we don’t take the climate emergency seriously, immediately, then we’re finished.

“This has to be the decade of decisive climate action. That means trust, multilateralism and collaboration,” António Guterres told climate ministers and negotiators from 40 countries, assembled in Berlin to discuss the crisis.

“We have a choice: Collective action or collective suicide,” the secretary-general said. “It is in our hands.”

The Berlin gathering, which runs through Tuesday, is a precursor to COP27⁠—this year’s installment of the annual U.N. Climate Change Conference will take place in Egypt in mid-November.

Last year’s COP26 conference in Glasgow, Scotland, did not yield any groundbreaking agreements. And in recent months, countries’ climate plans have been upended by an energy crisis largely resulting from Vladimir Putin’s Ukraine invasion.

Germany and Italy, for example, have had to reluctantly pause their coal phase-outs so they can keep the lights on despite reduced gas flows from Russia.

On Monday, Guterres said COP26 had ended with the aim of keeping global warming to 1.5 degrees Celsius “on life support.”

“Since then, [the 1.5°C goal’s] pulse has weakened further,” he warned. “Greenhouse gas concentrations, sea level rise and ocean heat have broken new records. Half of humanity is in the danger zone from floods, droughts, extreme storms and wildfires. No nation is immune. Yet we continue to feed our fossil fuel addiction.”

The U.N. chief said it was essential to “demonstrate at COP27 that a renewables revolution is underway,” with richer countries helping poorer countries to transition from coal to green energy—a deal last year between Germany and South Africa is seen as the template here.

Guterres also called for an urgent focus on adaptation, and urged a massive expansion of the extreme-weather early warning systems that are currently lacking in many parts of Africa, South Asia, and Central and South America.

Even in richer countries, adaptation is going to be difficult at best.

In the U.K., where the national weather office has issued its first ever Red warning for the start of this week, key parts of the infrastructure—from roads and railway lines to poorly insulated homes—are simply not made to handle temperatures that may surpass the existing heat record of 38.7°C (101.6°F).

Some warn that it’s not a viable option to focus on adaptation as the main answer to the climate crisis.

“It’s a legitimate question, could we just adapt to climate change?” said climate scientist Corinne Le Quéré—a key adviser to both the British and French governments—in a Financial Times interview published Monday. “And the answer is no. Because the warming continues. You cannot just adapt because the target keeps moving.”

“This unprecedented red warning for extreme heat is a wake-up call about the climate emergency,” Hannah Cloke, a natural hazards researcher at the University of Reading, said in a Friday statement.

“We have had heatwaves in the U.K. before, but the intensity of heat that has been forecast, which will either break U.K. records or at least get very close, is enough to kill people and animals, damage property, and hobble the economy.”

“Even as a climate scientist who studies this stuff, this is scary. This feels real. At the start of the week I was worried about my goldfish getting too hot. Now I’m worried about the survival of my family and my neighbors.”

Across the English Channel, the heatwave is forcing electricity giant EDF (which may soon be nationalized due to energy-crisis-related money troubles) to cut output at its nuclear power plants—the facilities cool their reactors using water from passing rivers, which are currently too warm for the power stations’ safety standards.

Wildfires are yet again raging across Portugal, Spain, France and Greece. Hundreds of people have already died in southern Europe, due to the high temperatures. On the other side of the Mediterranean, parts of northern Morocco are also ablaze.

Over in the U.S., record temperatures—as high as 110°F—are expected this week in parts of Texas, Oklahoma, and Kansas. The human-caused heatwave will intensify the drought in the region, while testing Texas’s beleaguered power grid.

Meanwhile, already-elevated temperatures in southern China are expected to soar from the middle of this week, reaching up to 107.6°F in provinces such as Fujian and Jiangxi—and it’s likely to stay hot all the way through late August, which is unusually long.

“Time is no longer on our side,” said Guterres in his Monday address. “We need to reduce emissions—now.”