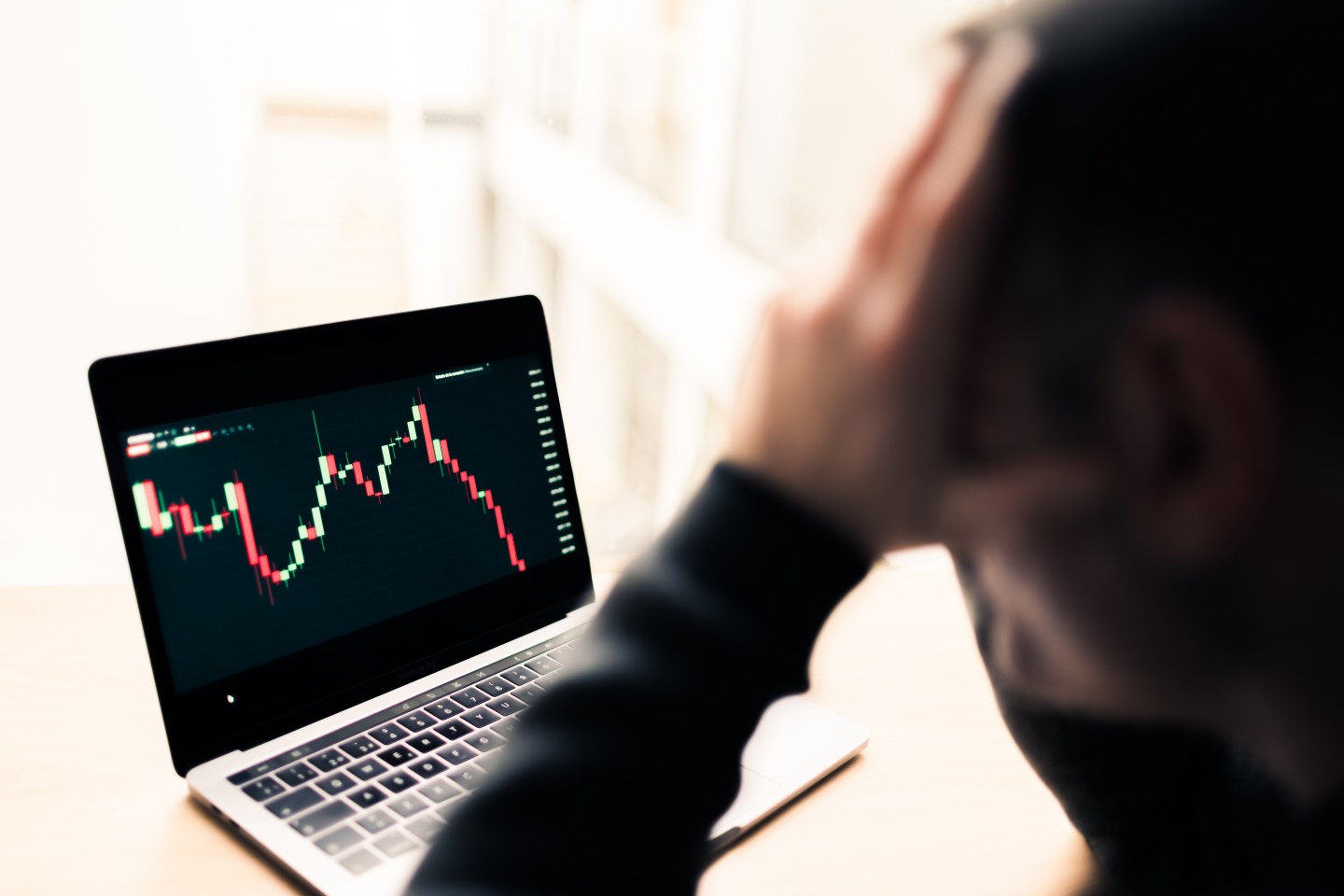 If you're heavily invested in Bitcoin and tech stocks, it's been a first half to forget, a Fortune report finds.
Ricardo Mendoza Garbayo for Getty Images

When looking in the rearview mirror, a mix of high inflation, interest rate hikes, the onset of crypto winter, and more made the stock market’s first half of this year pretty tumultuous.

In the Fortune piece, ‘A horror story’. These 3 charts show just how historically bad markets performed in the first half of 2022, my colleague Bernhard Warner notes that “nearly every asset class finished deep in the red.” Warner refers to a July 1 note Jim Reid, part of Deutsche Bank’s thematic research team, sent clients: “It’s a bit of a horror story. The S&P 500 has now seen its worst H1 total return performance in 60 years. And also, in total return terms, it’s fallen for two consecutive quarters for the first time since the [global financial crisis]. Meanwhile, 10-year Treasuries look set…to have recorded their worst H1 since 1788, just before George Washington became President.”

Warner writes: “If you are long safe-haven dollar and crude, your portfolio is outperforming the pack. The U.S. benchmark West Texas Intermediate is up 39% on the year, and the greenback is far outperforming the world’s currencies so far. Congratulations. But if you’re heavily invested in Bitcoin, tech stocks, blue-chips, Asian shares, you name it—it’s been a first half to forget.” He provides an in-depth analysis of the worst performance in 60 years. (You can read the complete report here.)

As for the next six months, many finance chiefs have a bearish market outlook. The “CFO view of the stock market’s next leg: it will be lower,” according to a recent CNBC survey. About 77% of CFOs said they “expect the Dow Jones Industrial Average to fall below 30,000 before ever setting a new high,” CNBC found. At the end of day July 1, the Dow Jones Industrial Average was 31,097.26. And 55% of CFOs said over the next six months, energy will show the most growth among all sectors in the economy. Energy shares are up more than 30% in 2022, according to S&P Dow Jones Indices.

CFOs in the energy and resources sector have the highest net optimism (+14) for the financial prospects of their companies, Deloitte’s Q2 2002 CFO survey found. In comparison, CFOs in financial services (including insurance, banking and securities, investment management, real estate, and private equity) had one of the lowest net optimism scores (-38).

How are finance chiefs preparing for the road ahead? “From our interactions with CFOs, we understand that many are working to reduce debt, increase margins, and seek efficiencies, including through technology,” Steve Gallucci, the global and U.S. leader of Deloitte’s CFO Program, recently told me.

The first half of 2022 was a “horror story.” And it doesn’t seem like the next six months will be a fairy tale. In preparation, what are you focusing on? Let me know.

Morgan Stanley’s E-Trade released data on July 1 from its monthly sector rotation study. The top three sectors in May and June were consumer discretionary (nonessential goods and services, like cars and entertainment), industrials and energy. All three sectors increased in June, with consumer discretionary reaching 15.22%, according to the findings. The results are based on the trading platform’s customer notional net percentage buy/sell behavior for stocks that comprise the S&P 500 sectors.

Adjusting Your Strategy in a Tight Market, a report in Harvard Business Review, suggests that companies must stop prioritizing growth above all else as the business environment adjusts to high inflation and less abundant capital. Companies should recognize that innovation remains essential. "They will need better thought-through strategies that pay attention to costs as well as necessary changes to technologies and business models," according to the report.

Donna Blackman was promoted to CFO at Stride, Inc. (NYSE: LRN), a provider of itech-enabled education solutions. Blackman has served as Stride’s chief accounting officer and treasurer for the past two years. She will replace outgoing CFO Timothy Medina, who is retiring. Before joining Stride in 2020, Blackman served as the SVP of business operations at BET Networks, a subsidiary of Viacom. During her tenure at BET, Blackman also held roles as SVP and head of finance, SVP of financial planning and analysis, and SVP of finance and controller. Earlier in her career, Blackman worked for both Marriott International and KPMG in various leadership roles in accounting and finance positions.

Jillian B. Thomsen was promoted to SVP and CFO at Nektar Therapeutics (Nasdaq: NKTR). Gil Labrucherie, the company's current COO and CFO, will be departing the company to pursue another opportunity at a private biotechnology company. In April 2008, Thomsen was appointed chief accounting officer at Nektar. She has over 30 years of finance and accounting experience. From 2006 to 2008, she served as VP of finance and controller of Nektar. Before joining Nektar in 2006, Thomsen was deputy controller of Calpine Corporation. She started her career serving twelve years in Arthur Andersen LLP's audit and business advisory services practice.

"It's either straight ahead misdirection or a deep misunderstanding of basic market dynamics."

—Amazon founder Jeff Bezos posted on Twitter in response to U.S. President Joe Biden's tweet calling on gas companies to lower prices at the pump, as reported by Fortune.