‘A horror story’. These 3 charts show just how historically bad markets performed in the first half of 2022 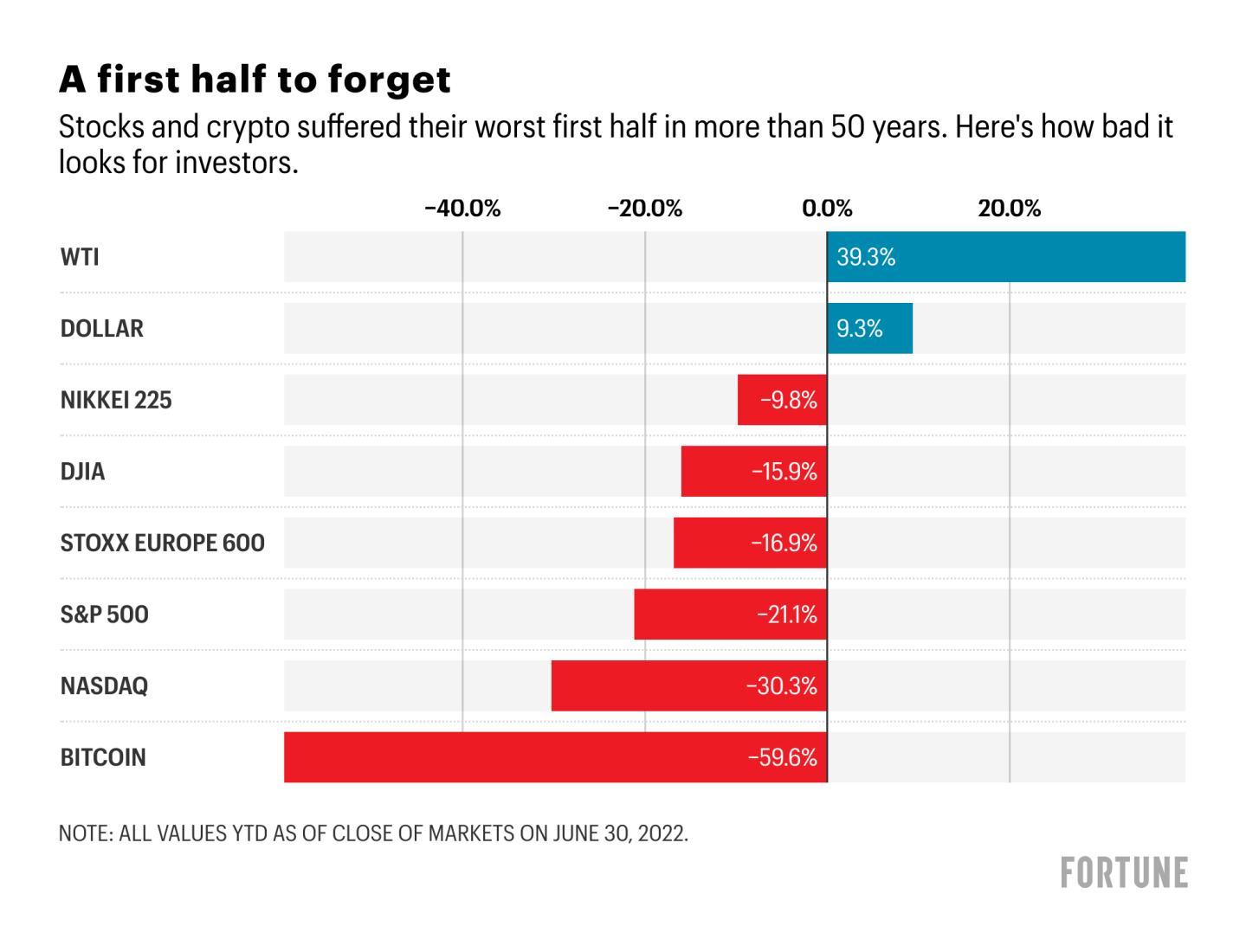 How bad did crypto and stocks perform in the first half of 2022? It was the S&P 500's worst start to the year in more than 50 years. Bonds and crypto fared even worse.
Chart by Fortune

Stocks, corporate debt, sovereign bonds, cryptocurrencies—there was no safety for investors in the first half of 2022.

It’s “a bit of a horror story,” concluded Jim Reid, part of Deutsche Bank’s thematic research team, commenting in a note to clients this morning. “For what it’s worth, the S&P 500 has now seen its worst H1 total return performance in 60 years. And also in total return terms, it’s fallen for two consecutive quarters for the first time since the [global financial crisis]. Meanwhile, 10-year Treasuries look set…to have recorded their worst H1 since 1788, just before George Washington became President.”

What does worst performance in 60 years actually look like? Let’s go straight to the numbers.

If you are long safe-haven dollar and crude, your portfolio is outperforming the pack. The U.S. benchmark West Texas Intermediate (WTI) is up 39% on the year, and the greenback is far outperforming the world's currencies so far. Congratulations.

But if you're heavily invested in Bitcoin, tech stocks, blue-chips, Asian shares, you name it—it's been a first half to forget.

Drilling down into stock sectors, just one of the 11 S&P 500 sectors is in positive territory for 2022.

Few groups were harder hit than crypto bulls. Bitcoin fell nearly 60% in the first half. That was hardly the worst performance for virtual coins over the first six months of 2022.

It was an ugly first half for bond holders too, with the closely watched 10-year Treasury now down 9.4% on the year. According to Bloomberg, this is the first time in 48 years that both stocks and bonds fell in the same period, dealing another blow to the tried-and-true 60/40 stocks-to-bonds investment strategy.

And the worst-performing stock is...?

Here are more unsightly nuggets to describe the first half of 2022:

History shows that bear markets last, on average, about 16 months. That would would suggest investors are stuck in the first half of an uncertain stretch, particularly as the odds on a recession continue to climb.

Michael Burry of The Big Short fame figures we are about halfway through this bear market.

At 5 a.m. ET, S&P futures were trading 0.3% lower, as all three major indexes were in the red. The dollar too was higher. Over in Europe, stocks were flat, but off earlier lows.