A list of companies supporting abortion rights after the Roe v. Wade ruling shows which firms are stepping up, and why 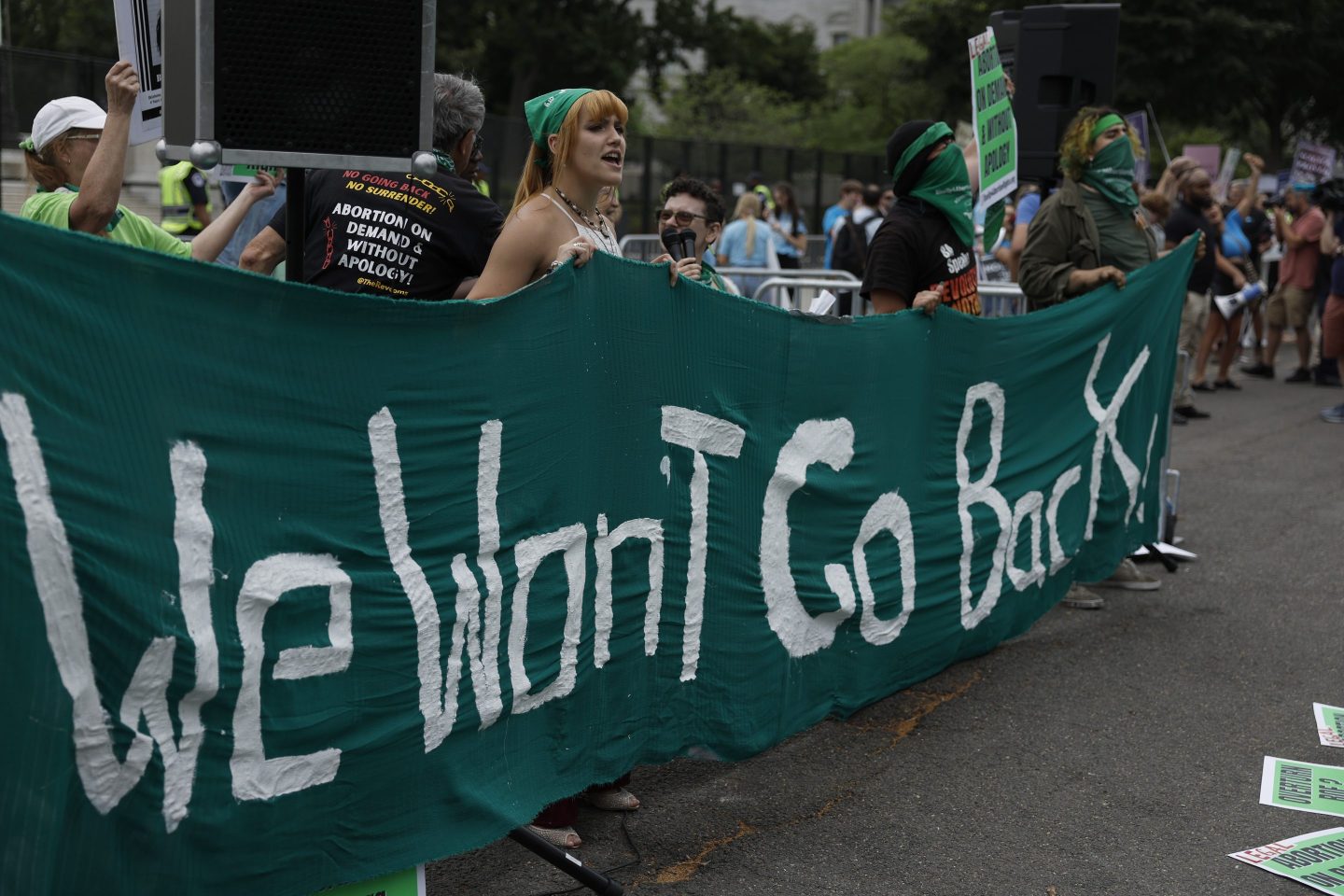 An abortion rights protest outside the U.S. Supreme Court after the court overturned Roe v. Wade. Firms in industries that rely heavily on younger talent have been faster to act in support of employees' reproductive rights, the authors found.
Anna Moneymaker—Getty Images

It’s not “woke CEO” ideology that drives corporate civic actions. This is demonstrated by the results of our in-depth study of the scores of first-mover companies—118 so far—that have publicly responded to last week’s Supreme Court rollback of a woman’s right to reproductive choice.

Over the past 45 years, our institute’s researchers have been studying companies that have spoken out as first movers on many social issues—ranging from apartheid to abortion, from racial justice to responsible governance, from cancer control to corruption, from sustainability to gun safety, from immigration reform to investor activism, from election security to energy supply, from opposition to Chinese labor practices to  retreats from doing business in Russia.

The stances taken by companies on most of these issues enjoyed support from more than 80% of Americans, though some others politically divided the nation. The speed of a company’s corporate engagement was rarely determined by the ideology of its leaders, but more often by its strategic positioning and considerations. Thus, where a company stood depends on where it sits in society. And current responses to the Supreme Court abortion ruling follow similar lines.

For example, it was the entire Western fashion industry, facing the prospect of consumer boycotts, that last year directly challenged China’s labor practices by opting to avoid using Xinjiang province’s fine cotton, a by-product of the oppression of China’s Uighur minority. Brands such as Nike, Levi Strauss, and H&M faced reprisals from the Chinese government this time last year, but they held their ground as demand from Chinese consumers rebounded by the fall.

Few of the first movers among the 1,300 firms we studied that exited Russia this spring have historically been early champions of social-justice campaigns. Whatever self-interest was embedded in their motives, their bold leadership was still noble and catalytic on the actions of all companies.

Preempting critiques of oligarchical entanglements, BP, Shell, and Exxon wrote down billions of dollars immediately after the outbreak of Russia’s unprovoked bloody assault on the sovereign Ukraine nation. This was soon followed by the withdrawal of Big Tech enterprises such as Microsoft, IBM, Dell, HP, Meta, and Google, which had been deeply embedded in activities of great value to Vladimir Putin. This tech exodus, in turn, was quickly followed by professional service firms such as McKinsey, Boston Consulting Group, Bain, Deloitte, EY, PwC, KPMG, and Grant Thornton.

Our top-read SSRN scholarly research shows that the financial markets rewarded these businesses handsomely for their ‘woke” moves in exiting Russia, because those exits were strategic reductions in business risk on many levels.

When we examined the 118 first movers on the response to the Supreme Court’s overruling of Roe v Wade’s abortion protection, the firms’ actions similarly broke down in relation to strategic positioning. Those that acted quickly to address women’s health needs, in the form of guaranteeing to pay for employee travel to states that allow abortion, don’t seem to have been driven by feminist ideology, or their leadership’s beliefs or gender identity.

We also found that these first-mover companies did not have significantly more women on their boards of directors or in their ranks of senior management compared to their peers. The size of the company likewise had little bearing on first-mover status. What did matter in analyzing these first movers, however, was their strategic constituencies—their industry, their workforce, and their geographic positioning.

Of the 118 first-mover companies, we found that while certain industries such as heavy industry and manufacturing were sparsely represented,  nearly a third of the companies were from the tech sector, making tech by far the largest sectoral component. The average age of tech workers in the U.S. is 35, about five years younger, on average, than all other workers, and surveys consistently show strongest support for the right to choose amongst younger individuals. Indeed, a recent Morning Consult poll found that although Americans are 50-50 divided over whether companies should make their stance on abortion rights known, younger individuals are by far the most supportive of them doing so. Financial and professional service firms were the second- and third-largest cohorts; combined with tech they represent nearly two-thirds of all first movers. The image of these firms as progressive on social issues is vital to attracting the tens of thousands of socially conscious Gen Y recruits they require to feed their pyramidic staffing and business models.

An even more powerful strategic differentiator for these first movers was physical and political geography. We found that amazingly, only 9 of the 101 first-movers were companies that are headquartered in “red states,” which we define as states where Republicans control both the legislature and the governor’s office. Indeed, many major companies from red states such as Georgia and Texas that are usually fast to move on social issues have been notably silent.

Of course, moral outrage has led to cross-cutting business leadership engagement on popular causes—including U.S. election security, voting access, racial justice, climate change, and punishing Russia for its mass slaughter of innocent Ukrainian civilians. However, strategic considerations often push companies to be first movers in taking stands on ESG issues, which matter to their constituencies and communities; such moves aren’t motivated by some “woke” ideology or personal beliefs of executives.

These findings may surprise the cynical cultists of Milton Friedman, but they would not surprise Friedman himself. In fact, in the 1970 article his acolytes love to cite, but have apparently never read, Friedman acknowledges, “It may well be in the long‐run interest of a corporation that is a major employer in a small community to devote resources to providing amenities to that community or to improving its government. That may make it easier toat tract desirable employees, it may reduce the wage bill or lessen losses from pilferage and sabotage or have other worthwhile effects.”

Nope: Friedman never said the only social responsibility was the bottom line, and neither do today’s smart CEOs.

Steven Tian is director of research at the Yale Chief Executive Leadership Institute.