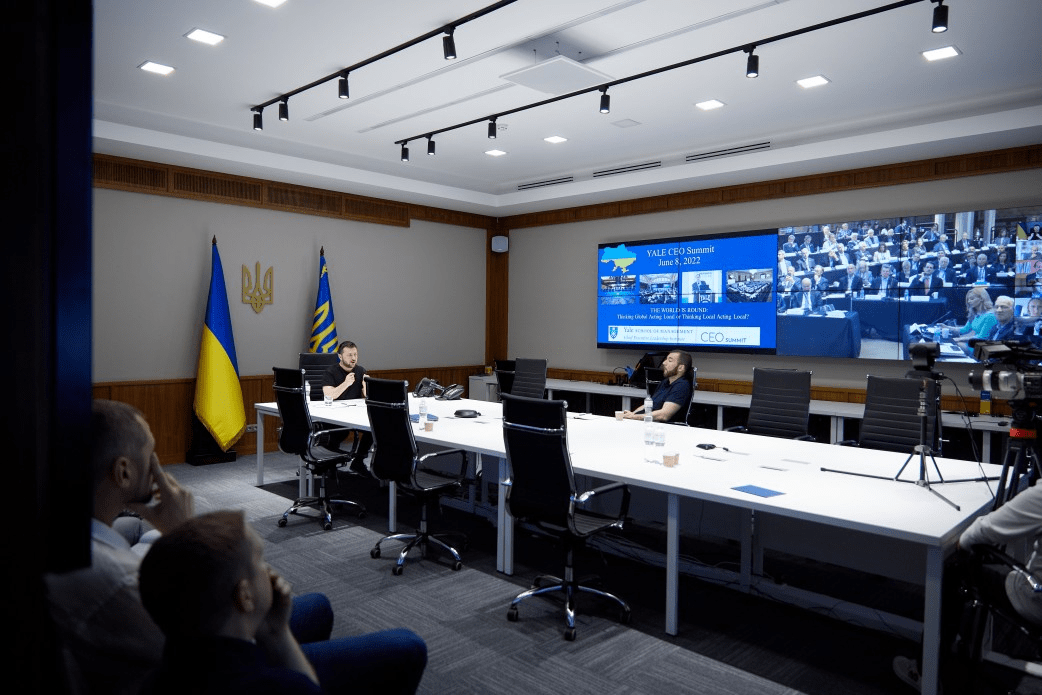 Ukraine President Volodymyr Zelensky, seated at the head of the table, addresses the Yale CEO Summit via video feed on June 8, 2022. "I’d like your companies to consider not only the option of leaving Russia, but also finding their place in the Ukrainian economy," Zelensky told the group.
Courtesy of Yale Chief Executive Leadership Institute

Lord Frederick North, Britain’s Prime Minister during the U.S. Revolutionary War, is said to have once proclaimed, “The only vacation I need is a different set of problems!”

In an unprecedented give-and-take with top U.S. business leaders and mayors last week, Ukraine’s President Volodymyr Zelensky provided the audience with a different of problems—but that “vacation,” while invigorating, was hardly relaxing. He warned, “If the enemy can reach us, it can reach every country of the European Union. And I’m sure that the enemy can reach the United States. We strive to defend the principles of democracy and freedom.”

Zelensky’s past meetings with such bodies as the UN Security Council, the EU, the U.S. Congress, and the Davos crowd have been characterized by warnings about Russian imperialism, pleas for needed weaponry, the sluggish delivery of those weapons, and scolding over the need for enhanced sanctions. But this time, his tone and message was different.

He joined our 133rd Yale CEO Summit—a gathering of 150 top CEOs and 35 major city mayors that we convened in New York on June 8. Zelensky established a personal rapport, thanking these leaders for their historic retreat from doing business in Russia. He also shared some sobering insight into the strategic implications for them of Ukraine’s noble battle and discussed ways they can help beyond lobbying for military support.

He was greeted by unanimous enthusiasm as most CEOs wore Ukrainian flag colors and spontaneously leaped to their feet for multiple standing ovations. In a survey after the event, fully 100% of participants, agreed that they were “inspired by Ukraine’s demonstration of courage and unity”, and 96% agreed that the 1,000 companies that have already curtailed operations in Russia, which we estimate collectively represent close to 40% of Russian GDP, did the right thing and that their exits were rewarded in financial markets.

While most coverage has focused, deservedly, on our unique format and the remarkable strength of U.S. support, that is far from the only message. Zelensky’s impromptu responses, reported here for the first time, offered revealing, candid insights into Ukraine’s evolving strategy, as the conflict enters a more difficult, prolonged phase. And perhaps most notably for Fortune’s readership, they focused on what business leaders can do to support Ukraine.

‘We need to work on rebuilding Ukraine‘

U.S. businesses should not only leave Russia, but support Ukraine

Zelensky reiterated the importance of companies exiting Russia and not paying taxes to the Russian government, which “finances the Russian war machine killing Ukrainians.” He also simultaneously presented a new, multifaceted vision for how business leaders can support Ukrainian reconstruction.

Specifically, in response to questions from CNBC’s Sara Eisen and Chobani’s Hamdi Ulukaya, he offered “concrete steps businesses can take.” Among them: Hiring highly trained Ukraine-based tech workers for remote jobs; hiring Ukrainian refugees, with 5 million having fled Ukraine since the beginning of the invasion; investment in strategic growth sectors such as digitalization and green renewable energy; continuing purchases of Ukrainian exports; and aiding the rebuilding of the country’s decimated infrastructure and industrial capabilities.

‘We need a powerful Ukraine‘

The only way to counter Russia is by strengthening Ukraine

Rebutting naive appeasement stances echoed by those trapped in a Perestroika time warp, including Henry Kissinger, Zelensky strongly reiterated his message that western businesses should not support any negotiated political settlement which cedes territory to Russia.

In response to questions from Lloyd Blankfein of Goldman Sachs, Zelensky argued that while economic pressures may make the illusion of a negotiated peace ceding Crimea and the east to Russia attractive, Ukraine is at the forefront of a global struggle for democracy and freedom, and any settlement with Russia would only lead to more expansive attacks from Putin in the years ahead, making the role of business in helping with the rebuilding of Ukraine all the more important. Zelensky encouraged business leaders to “whisper in the ears of political leaders” against misguided attempts at appeasement, since, as he said, “Ukraine is willing to put an end to this war—but not at the price of our independence.”

‘A tsunami‘ of hunger

Disruptions to agricultural exports are leading to global famine

In response to questioning from Jane Fraser of Citi on the war’s disruption of agricultural commodity markets, President Zelensky pulled no punches, making it clear that the world is barreling towards global famine due to Russia “perpetuating an artificial crisis.”

Not only has Russia blockaded crucial export ports on the Black Sea and Azov Sea and hijacked Ukrainian grain shipments, but Russia has been maliciously destroying agricultural infrastructure and disrupting the entire supply chain. Seeds are not being planted, as Putin’s invasion has coincided with planting season. This will lead to diminished crop yield in the annual fall harvest. Meanwhile, 20 million tons of grain inventory in silos are being bombed, while the remaining inventory and what is left of the fall harvest face increasing challenges in getting to market. That’s a disaster in the making for global food security, considering Ukraine supplies nearly 20% of the world’s grain and corn, and nearly 50% in other key agricultural products such as sunflower oil.

Zelensky asked business leaders to lend their voices in support of secure maritime corridors to ensure Ukrainian agricultural exports can get out of the country.

Beware the overlooked consequences of the invasion

When asked by Ethan Allen CEO Farooq Kathwari about the unintended consequences of the invasion, President Zelensky pointed to the second- and third-degree humanitarian costs devastating civil society, even beyond the murder of thousands of innocent civilians:

– 12 million Ukrainians forced to flee their homes without IDs, papers, clothes, or money

– closing of shops and grocery stores

– children who are not going to school

– refusal to deliver medication to civilians behind Russian lines

– inability to pay out pension guarantees.

At the session with us was Zelensky’s economic advisor, Andriy Boytsun; and Nataliia Shapoval of the Kyiv School of Economics. They offered a newly released white paper from the Yermak-McFaul Working Group on Sanctions that offers interesting information on possible next steps.

The purpose of these proposals is to undermine Russia’s ability to wage war and to end the Russian aggression as soon as possible. The paper suggests individual-level sanctions targeting tens of thousands of Russian have helped undermine Putin’s war through asset freezes, travel bans, and other restrictions aimed at oligarchs, top Russian government officials, key Russian executives, and wartime propagandists.

Our prominent “List of Companies” leaving/remaining in Russia continues to catalyze companies to exit Russia while depriving Russia of ever-more tax dollars. “This is our common war,” Zelensky told the gathered leaders. “The companies that are represented in the Russian market should leave. The most important thing is, do not pay taxes to the Russian financial system, because this money is used to fund this Russian war machine that is killing Ukrainians. As the president of Ukraine, I’d like your companies to consider not only the option of leaving Russia but also finding their place in the Ukrainian economy, because this is important in terms of employment for our economy to deal with the tremendous challenges that we are facing.”

Sergiy Kyslytsya, Ukraine’s ambassador to the UN (far left), accepts an award from members of the Yale CEO Summit on behalf of Zelensky on July 8 in New York City.
Courtesy of Yale Chief Executive Leadership Institute

Russia will come to the bargaining table only if they are weakened. But for the business community, helping weaken Russia by curtailing operations is only one part of the equation. The comprehensive framework President Zelensky offered for how businesses can continue to contribute to what he called a “stronger Ukraine” looks toward the future.  Zelensky offered not just a different set of problems but also a different set of solutions.