Is this the end of low interest rates? 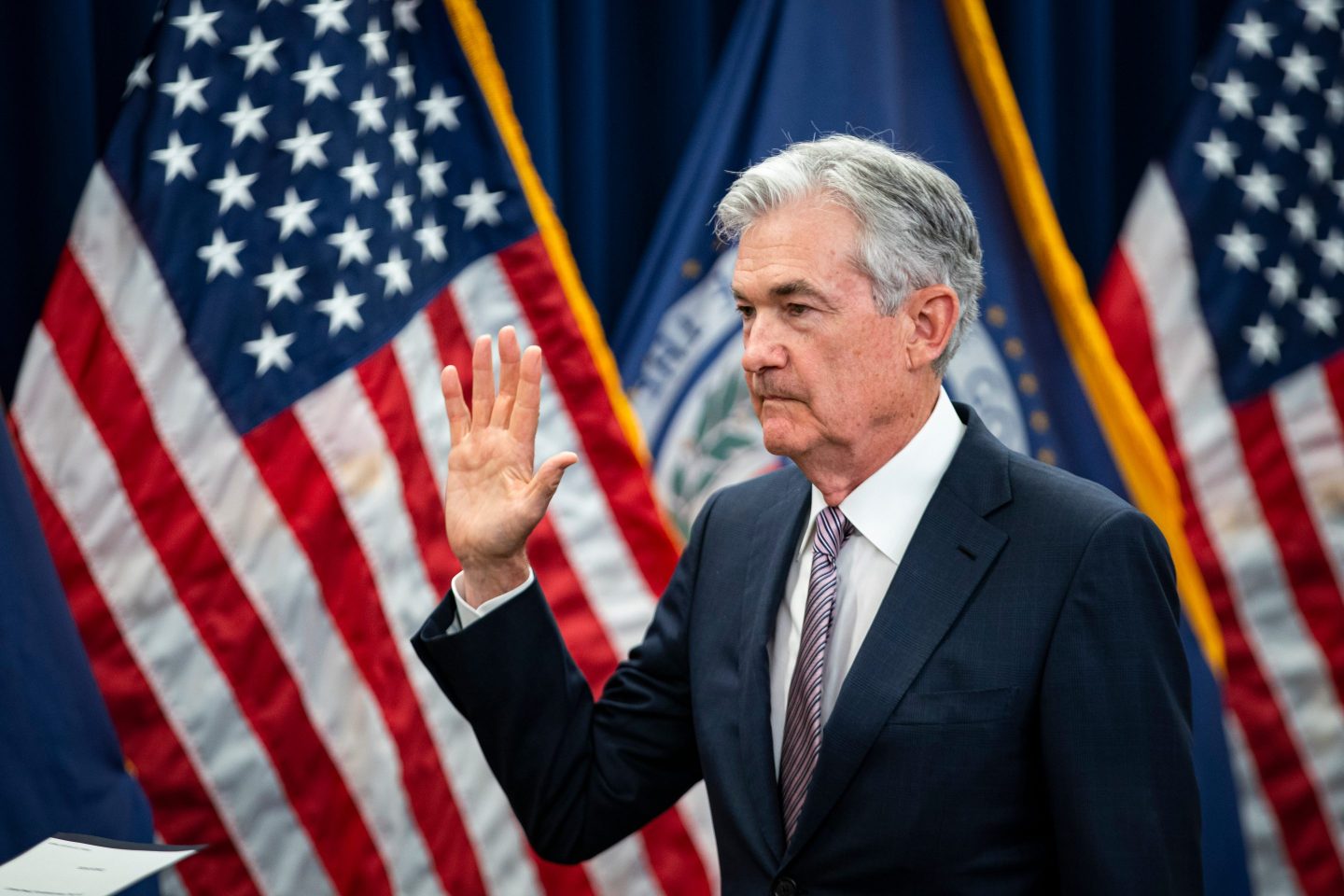 Federal Reserve Chairman Jerome Powell at his swearing in on May 23, 2022. “To return to high and volatile rates reminiscent of the 1970s, we would need to see a sustained failure of the Fed to protect the inflation regime,” the authors write. “Today we do not see that.”
Al Drago—Bloomberg/Getty Images

Short-term interest rates have risen sharply this year, driven by Federal Reserve rate hikes and the expectation of another 200 basis points of increases in 2022 as the central bank responds to stubbornly high inflation. Besides the resulting uncertainty and rattling of markets, a bigger fear is growing that the U.S. economy could be permanently returning to damaging, higher long rates. Having grown accustomed to the benefits of low and stable long rates—such as high asset valuations and long expansions—an inflection of the low-rate world would fundamentally change the business and investment environment.

Yet, while risks are the highest in a generation, it is premature and could be costly to rush to such conclusions. Too often, the risk is painted in terms of extremes, as seen in the current popularity of the 1970s analogy, a reference to a time when the U.S. economy was structurally broken and lived with long rates in the high single digits, and well into double digits in the early 1980s.

In reality, there are several possible interest rate environments—of which two are most plausible in the U.S. Over the next few years, higher but healthy rates may prevail, whereas the low-rate environment may reassert itself longer-term. Less likely, but not impossible, remains a damaging structural shift to a high and volatile rate environment. To understand why, we need to look at the key drivers and what it would take for them to inflect.

Long interest rates, often represented by looking at the yield on 10-year U.S. Treasury notes, have been low, or extremely low, in recent history. They have become a pillar of the modern macro environment by underpinning high valuations of risk assets, driving longer expansions by empowering both fiscal and monetary policy to lean into growth, and other benefits—including cheap mortgages, cheap car loans, and cheap student loans.

While the continuation of an extremely low-rate world remains a valid scenario, there are credible higher rate scenarios if we look at the main drivers of long-term interest rates.

Why have long rates been so low? First and foremost because inflation declined structurally over the last 40 years, and—critically—long-term expectations of inflation did, too. When investors in public debt believe that inflation will not erode the future value of their investments, the yield they expect on U.S. Treasury notes is lower. Investors are also paid a risk premium which compressed materially in the years before COVID—in part because inflation was too low. As inflation continuously undershot its 2% target, the risk of deflation was clear, and downward pressure on rates prevailed.

There are other drivers of the low interest rate environment. A global savings glut and slowing growth in much of the developed world underpinned a falling “neutral” rate of interest—a level of interest which is neither a tailwind nor a headwind to economic growth. Historically low in recent years, the neutral rate meant that the Fed did not have to raise its policy rate much to manage the cycle, leading to expectations of low rates even when the economy was strong. And not to be forgotten, the Fed aggressively used its balance sheet to push long rates down, buying large quantities of debt to do so.

A scary but unlikely scenario

Today, that world we’ve known is under considerable stress. Inflation is high and the Fed is currently expected to move the policy rate near 3% by early 2023 to contain it. While we think it can succeed in its objective to contain this bout of inflation, there is growing fear and debate that we’re on the cusp of a structural pivot into a higher-rate world.

First, consider the apocalyptic scenario of high and volatile rates—which currently is popular in public discourse as headlines and commentators compare the present to the 1970s. Though such an inflection can never be ruled out, many things would have to go wrong from here: As disconcerting as the recent 8.3% inflation print may be, it does not mean the U.S. economy is anywhere close to a 1970s-type environment.

Rather than a specific level of inflation, the “high and volatile” interest rates of the 1970s were about broken inflation expectations, which took the better part of a decade to materialize. The growing belief that three, five, and 10 years into the future inflation would still be high is what drove rates to very high and volatile levels. That belief was so entrenched that even when unemployment was high during recessions, inflation remained high.

While such a shift in expectations could happen today, there is little evidence of it happening. Household surveys show expectations to be elevated on the one-year horizon, but five years ahead they remain contained. Meanwhile, markets continuously price inflation compensation over many horizons, shining some light on market expectations. Currently investors expect 2.7% compensation for inflation between 2027 and 2032. That is clearly higher than during the pre-COVID years when inflation constantly undershot its target—but it is lower than what investors demanded between the start of the century and 2014. It is not the pricing of runaway inflation expectations.

Perhaps most critically, to return to such high and volatile rates reminiscent of the 1970s, we would need to see a sustained failure of the Fed to protect the inflation regime. Today we do not see that—on the contrary, we see a Fed that is committed to moving until they achieve price stability.

A higher but healthy scenario

A far more plausible scenario is that of long rates drifting to higher—but still healthy—levels. Even without expectations unhinging, there are credible forces that could jolt inflation permanently out of its deep slumber of the pre-COVID years and into a state where the risks are to the upside.

Cyclically, upward pressures are delivered by an economy running hot as supply struggles to keep up with demand. Given upside inflation risk and very tight labor markets, monetary policy makers are likely to move policy to a tight stance—where rates stay above “neutral” to better balance the shift back to an upside inflation risk profile.

But upside inflation risks are not only cyclical. A world that is leaning away from global supply chains in search of greater resilience will not provide the same deflationary impulse in product markets. Other structural upward forces are also coming into play, such as demographics and the green transition that could bring broad-based, upward pressure on costs.

Upside risks make monetary policy a more challenging job; however, they don’t automatically mean a bad macroeconomic backdrop. An analogy for the “higher but healthy” interest rate world could be the 1990s. Then, still in the shadows of the very high rates imposed by Paul Volcker to rein in inflation of the 1970s and early 1980s, long rates lived typically above 6%—but growth was strong, and the expansion survived a variety of shocks.

The “neutral rate” of interest remains important in this regard. To return to the interest rate environment of the 1990s we need not return to the same levels of 6% or higher that prevailed then. This is because lower neutral rates, perhaps having fallen by more than 200 basis points since the 1990s, suggest that 4% rates provide equivalent monetary tightness to balance upside risks of inflation.

Downside risks are dormant, not dead

In the U.S., the downside risk scenarios for interest rates are dormant today, not dead, while in much of the rest of the world their slumber may be light, particularly in the medium run.

A common fear in the pre-COVID years was that of “Japanification”—the contagion of Japan’s macroeconomic conditions loosely defined by policy rates stuck at zero, inflation near or below zero, and the inability to protect a slow growth economy from frequent recessions.

While today deflation risks in Europe look dormant, with energy-driven price growth explaining the vast majority of the inflationary overshoot, in the medium term the continent may well return to flirting with too low inflation.

An extreme version of deflationary pressures—that of a depression—remains on the risk menu because, like the opposite extreme of unanchored double-digit inflation and rates, it can never be ruled out. Just recall how at the start of COVID many commentators predicted a prolonged period of negative price growth and Depression-era conditions of the 1930s. Yet the deflationary depression remains a remote risk in economies with fiscal capacity to backstop such a downward spiral.

Despite the pain, higher but healthy is not all bad

While the interest rate environment in coming years will have a different look and feel from what we’ve known, it is unlikely to be a shift from a good to a bad backdrop. Inflation risks have shifted from the downside to the upside—and with it the approach of monetary policy. And despite the pain involved in the fast rate moves we’re seeing now, this need not precipitate a fundamentally bad interest rate environment in the future.