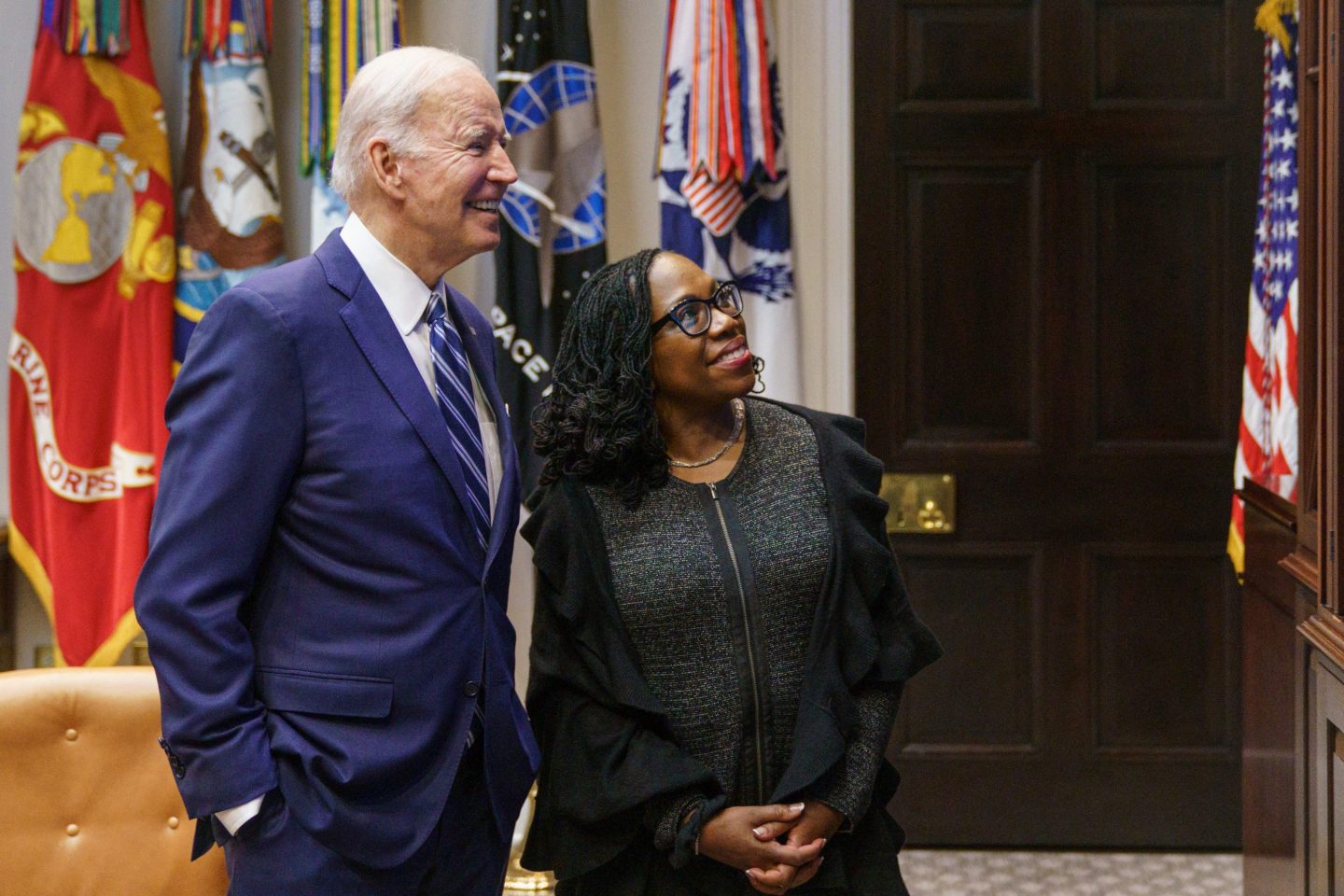 U.S. President Joe Biden and Judge Ketanji Brown Jackson watch the Senate vote on her nomination to be an associate justice on the U.S. Supreme Court, from the Roosevelt Room of the White House in Washington DC on Apr. 7, 2022.
Mandel Ngan—AFP/Getty Images

Judge Ketanji Brown Jackson’s confirmation should be welcomed, especially by those truly concerned about her trial and sentencing record. Justice Jackson will have less say over trials, less control over sentences, and less impact on victims. Her addition to the Court, however, could prove momentous for our criminal justice system.

Judge Jackson, a former federal defender and lawyer to the U.S. Sentencing Commission, has ascended from a judgeship at the record-creating trial court, to an error-correcting appellate court, before landing at the precedent-setting court of last resort. She will no longer be sentencing defendants or even reviewing sentences for legal error. Her influence will be largely prospective.

Justice Jackson could shape charging decisions by prosecutors for decades to come. If, for example, she joins a decision to endorse a narrow reading of a criminal statute, the lives of people who could be swept up in an ambitious prosecution will not be upended, and their liberty will not be threatened.

What’s so special about this incoming justice? Judge Jackson is part of the class of public defenders who have been nominated by President Biden with the backing of their courtroom foes: former federal prosecutors who value a different perspective. It is a perspective that will be unique on the high court. She has had unfiltered exposure to Supreme Court opinions traveling down the judiciary and touching individuals. She brings a much-needed voice to a robing room filled with former professors, scholars, prosecutors, and appellate advocates.

Yes, Judge Jackson will be a Democrat-appointed justice joining the most conservative Court of our time. But cases involving defendants’ rights often produce unexpected coalitions.

Justice Barrett, writing over a Thomas-Roberts-Alito dissent, endorsed a protective reading of a criminal fraud statute. Justice Thomas and Justice Gorsuch delivered key votes freeing district judges to sentence certain defendants to less than 15 years in prison.  Breaking with other conservative justices, they ruled that a crime committed recklessly, rather than intentionally, could not be a “violent felony.”

It’s not a phenomenon limited to just the last term. In one of the most significant criminal cases of the last two decades, United States v. Booker, then-Chief Justice Rehnquist joined Justice Breyer, over the dissent of a liberal lion, Justice Stevens (supported by conservative hero, Justice Scalia), to hold that the sentencing guidelines could not bind district judges.  That five-four opinion—one of two issued in the same case by the fractured Court—freed federal judges to make holistic evaluations of defendants and their conduct.  It affirmed the truism that judges sentence people, not crimes.  Almost two decades later, Booker reverberated around Judge Jackson’s confirmation hearing.

No one can predict the next frontiers in criminal jurisprudence, but a decent bet would be on issues raised in the white-collar space. The Department of Justice is pushing current laws to prosecute corporate conduct in novel ways and emphasizing aggressive prosecutions of employees.  New alliances could soon forge on the Court when it weighs questions like the need to show economic loss in property fraud cases and the wisdom of exposing executives to laws once reserved for drug dealers.

No justice is a sure vote one way or another and Judge Jackson may well disappoint her supporters. Regardless, the Court will now have the view of a justice who worked in the trenches as a criminal defense attorney and a trial judge.  Justice Jackson will not be imposing sentences, but she will thinking of judges who do—and of the thousands of people who are affected by our criminal justice system every year. That’s worth celebrating.

Andrey Spektor, partner at Bryan Cave Leighton Paisner, is a criminal defense attorney, trial lawyer, and appellate advocate. He is a former federal prosecutor and law clerk to district court and U.S. Court of Appeals judges.