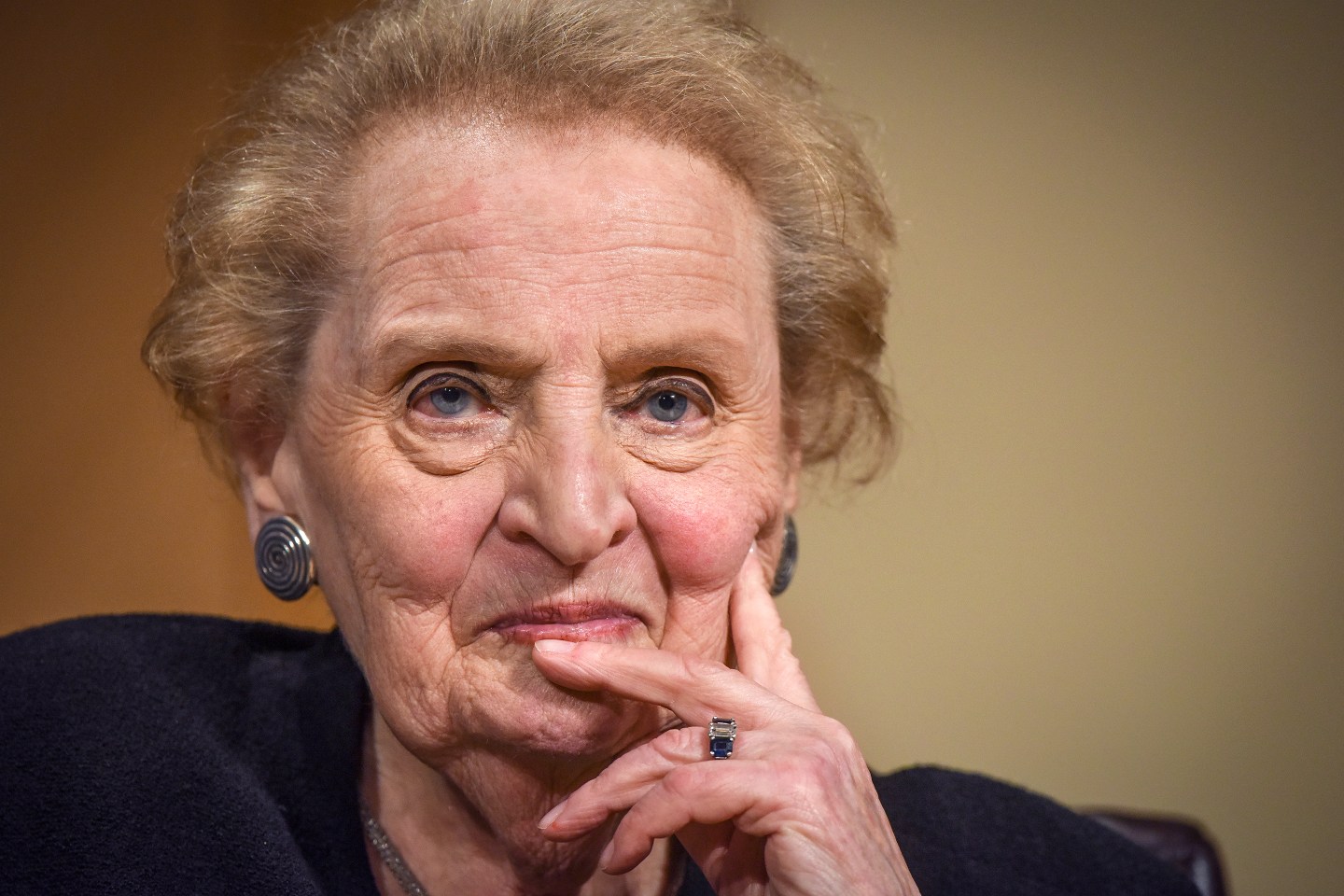 – Rest in peace. Feminist icon and former Secretary of State Madeleine Albright died Wednesday from cancer at age 84. Albright’s passing, which elicited tributes from President Joe Biden and former President Bill Clinton, comes at a fitting moment to honor another historic first—so like the ones she achieved throughout her years in public service.

Judge Ketanji Brown Jackson, the first Black woman nominated to the Supreme Court, fought through tense, grueling, and at times disrespectful, GOP questioning on Wednesday as she defended her record against a series of accusations.

In the ninth hour, Democratic Sen. Cory Booker gave an impassioned speech, recounting the historical Black American figures whose efforts paved the way for Booker and Jackson to sit in the Senate hearing room. “You have earned this spot,” he told her. Jackson said as much in her opening remarks on Monday, narrating her father’s decision in the 1970s to move from Florida to Washington, D.C., to escape racism, which served as one of her many catalysts to pursue law.

Similarly, Albright’s politically fraught early years sparked her interest in foreign policy. She arrived in the U.S. in 1948 as an 11-year-old refu­gee from Czechoslovakia and became one of the most influential and skilled diplomats in Washington. Her appointment as secretary of state by President Clinton made her not just the first female secretary of state, but the highest-ranking woman in the history of U.S. government at the time. Her political appointment was a harbinger of a new era for women, and she was soon followed by two more female secretaries of state, Condoleezza Rice and Hillary Clinton.

Albright was known for her ability to conduct herself with aplomb. She championed democracy through a kind of brooch diplomacy, using fashion to communicate her diplomatic messages. When meeting with Russians who had bugged the State Department, she wore a pin depicting a bug. And after Iraq’s state-controlled media compared her to an “unparalleled serpent,” she wore a gold pin of a snake on her next visit. Much like the late Justice Ruth Bader Ginsburg, who inconspicuously affixed meaning to her many collars, Albright leaned into her femininity and unique style, turning it into an asset.

The legacy of anyone in such a position of power—where every decision has far-reaching consequences—is complicated. Albright often spoke of the Clinton administration’s failure to intervene in Rwanda, and she apologized in 2020 for saying that the deaths of children in Iraq as a result of U.S. sanctions in the 1990s were “worth it.”

Albright’s illness wasn’t widely known. She was engaged in foreign policy discussions as recently as last month, when she wrote a New York Times op-ed just before Vladimir Putin’s invasion of Ukraine. In it, she argued that an invasion would be a “historic error” and leave Russia “diplomatically isolated, economically crippled and strategically vulnerable in the face of a stronger, more united Western alliance.”

Albright has been an icon of women’s achievements for so long that it’s hard to imagine a world without her. But as we’ve seen with Jackson, there are many political firsts still to come. Rest in peace, Secretary.

Broadsheet update: We have two new team members joining us on the Broadsheet! I’d like to introduce you to Nimah Quadri and Paige McGlauflin. Nimah and Paige are fellows on Fortune’s Leadership desk, and will help curate the newsletter during their time here. You can reach them at nimah.quadri@fortune.com and paige.mcglauflin@fortune.com with story tips, movers & shakers submissions, or just to say hello.

The Broadsheet is Fortune’s newsletter for and about the world’s most powerful women. Today’s edition was curated by Nimah Quadri. Subscribe here.

- More SCOTUS. It's a SCOTUS-filled news week. In California, Judge Patricia Guerrero was confirmed to the bench, making her the first Latina to serve on the state's highest court. And on the current Supreme Court roster, Justices Sonia Sotomayor and Elena Kagan publicly dissented the court's decision in Wisconsin Legislature v. Wisconsin Elections Commission, which would essentially disempower Black voters.

- Still stuck in Russia. U.S. consular officials were finally granted permission to visit WNBA star Brittney Griner, who has been detained in Russia since Feb. 17. State Department spokesman Ned Pierce said Wednesday that Griner is in "good condition." The basketball player is currently in pretrial detainment and has been communicating with her family through Russian attorneys. USA Today

- Opposite abortion legislation. The Oklahoma state House voted 78-19 on Tuesday to pass a near-total ban on abortions, mirroring similar anti-abortion efforts in Texas. The bill, which now heads to the state Senate, would also allow private citizens to enforce the law through litigation. In news about a different kind of abortion legislation, California Gov. Gavin Newsom signed a law that reduces out-of-pocket abortion costs for patients who have the procedure covered by private insurance.  Axios

- Apple's latest update. People of color and women filled 59% and 47% of Apple's leadership roles, respectively, according to the tech giant's latest diversity report. The company has grown its share of female employees by 89% since 2014, while the percentage of employees from underrepresented communities has grown by 74%. Apple's overall employee count grew 58% in that same period. Protocol

MOVERS AND SHAKERS: Elizabeth Keffer is leaving BDT & Company to take on the new role of EVP and chief relationship officer at the U.S. Chamber of Commerce. Centene has appointed Sarah London its new CEO. Politico hired Dafna Linzer as executive editor. Neiman Marcus Group announced Katie Anderson as its new CFO. The New York Society for the Prevention of Cruelty has elected Shane Foley, Lilian Yang and Mikal Finkelstein to its board of directors. Cannes Film Festival named Iris Knobloch president, making her the first woman to lead the festival.

- School shutdown.  The Taliban is keeping schools closed for Afghan girls in seventh grade and above, just one day before classes were set to begin. Schools have been closed for girls ever since the Taliban took over the country in August of last year. The Taliban had originally promised to reopen school for all students, including girls, on March 23. Wall Street Journal

- Chipping away. Commerce Secretary Gina Raimondo pledged to use part of the $52 billion package that Congress plans to invest in domestic semiconductor production on training that boosts diversity. The semiconductor industry is heavily male-dominated with only a 10% female workforce. The proposed chips investment aims to create thousands of jobs that better reflect U.S. demographics. Bloomberg

- Shop 'til you drop. ShopThing, a live shopping marketplace with a focus on luxury goods, has raised $10 million in Series A funding led by Origin Ventures, along with Pritzker Group and Interplay. The startup was founded by Maggie Adam-Boynton in 2018 and has 500,000 users across North America. TechCrunch

My ambition turns off more men than it attracts The Cut

-Precious Lee on how being a curve model is a victory, especially for a southern Black woman.