The COP26 protesters are right: Too many leaders are ‘greenwashing’ 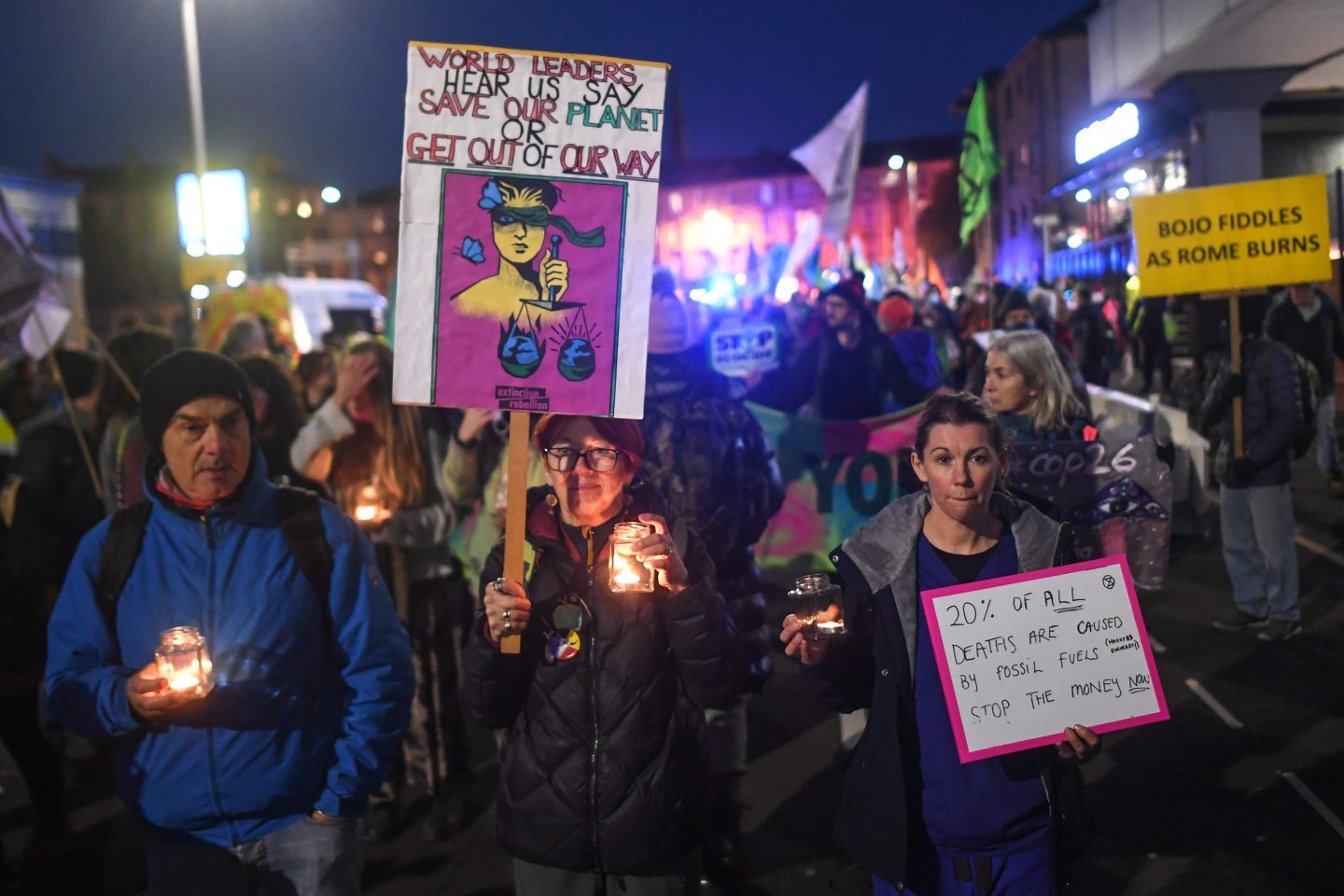 Protesters during an Extinction Rebellion candlelight vigil on Nov. 10, 2021, in Glasgow. “Climate commitments, no matter how well intentioned, mean nothing unless the impacts and emissions are tracked by a transparent and accurate system,” writes Gregor Robertson.
Photo by Peter Summers/Getty Images

Over the weekend, thousands of protesters filled the streets of Glasgow to express their skepticism about the COP26 climate talks. While some impressive pledges have been made by leaders from some 190 nations—including agreements by some to reduce methane emissions by 30% by 2030 from 2020 levels and to halt deforestation by the end of the decade—the green activists in the street weren’t buying it.

They believe that based on history, those commitments don’t go far enough and won’t be kept. As climate activist Greta Thunberg put it during the protests: “The COP has turned into a PR event, where leaders are giving beautiful speeches and announcing fancy commitments and targets, while behind the curtains governments of the Global North countries are still refusing to take any drastic climate action.”

From what I’ve seen in the hallways during the COP26 gathering, the activists protesting around the world have a point. Long after the delegates leave the conference, emissions will keep rising, and so will global temperatures, the frequency of climate disasters, impacts on communities, and the extinction rate. That’s because these climate commitments, no matter how well intentioned, mean nothing unless they trigger significant new investment and regulation, and unless the impacts and emissions are tracked by a transparent and accurate system. Otherwise, how will we make progress and how can we hold nations accountable?

A new investigation by the Washington Post highlights the problem. The newspaper found that many countries are seriously underreporting their greenhouse gas emissions. As Rob Jackson, a professor at Stanford University and chair of the Global Carbon Project, a collaboration of hundreds of researchers, told the Post: “If we don’t know the state of emissions today, we don’t know whether we’re cutting emissions meaningfully and substantially.”

Nations can learn from how cities around the world are making their climate reporting transparent and robust. Mayors in over 11,000 cities report their emissions and climate plans to the Global Covenant of Mayors and the Climate Disclosure Project, which presents a credible, unified platform for urban climate reporting, streamlining the process of reporting and ensuring simplicity and standardization for reporting progress on reducing climate pollution.

The corporate sector needs to be held accountable as well. John Doerr, the VC who was an early backer of Google and Amazon, has just published a book called Speed & Scale: An Action Plan for Solving Our Climate Crisis Now, in which he calls for corporations to adopt the system he calls OKRs—Objectives and Key Results—as an effective tool for measuring and managing carbon reduction. Some big American companies like American Airlines, Ford, and Amazon already have detailed and transparent plans for becoming carbon neutral. More should follow their lead.

Even small companies can get in on the act. Nexii, the green building company where I work, is reporting its commitments via detailed and transparent ESG reports. We also are joining the Science Based Targets Initiative, an organization that so far has helped more than 2,000 businesses set meaningful targets and metrics for carbon reduction.

Businesses have an incentive to go carbon neutral because the people who fund them now require them to have clear plans to reduce carbon. At COP26, a group of 450 major financial institutions, representing some $130 trillion in assets and calling itself the Glasgow Financial Alliance for Net Zero, promised to align their investment goals with the 2015 Paris Accords guidelines for cutting carbon emissions to “net zero” by 2050.

The protesters are right. Now it is time to take a page from the world’s cities and create a mechanism that will hold national governments accountable for climate change, before time runs out.

Gregor Robertson is the former mayor of Vancouver, cited as one of the greenest cities in the world, and is now an executive VP at Nexii, a startup that makes low-carbon buildings.