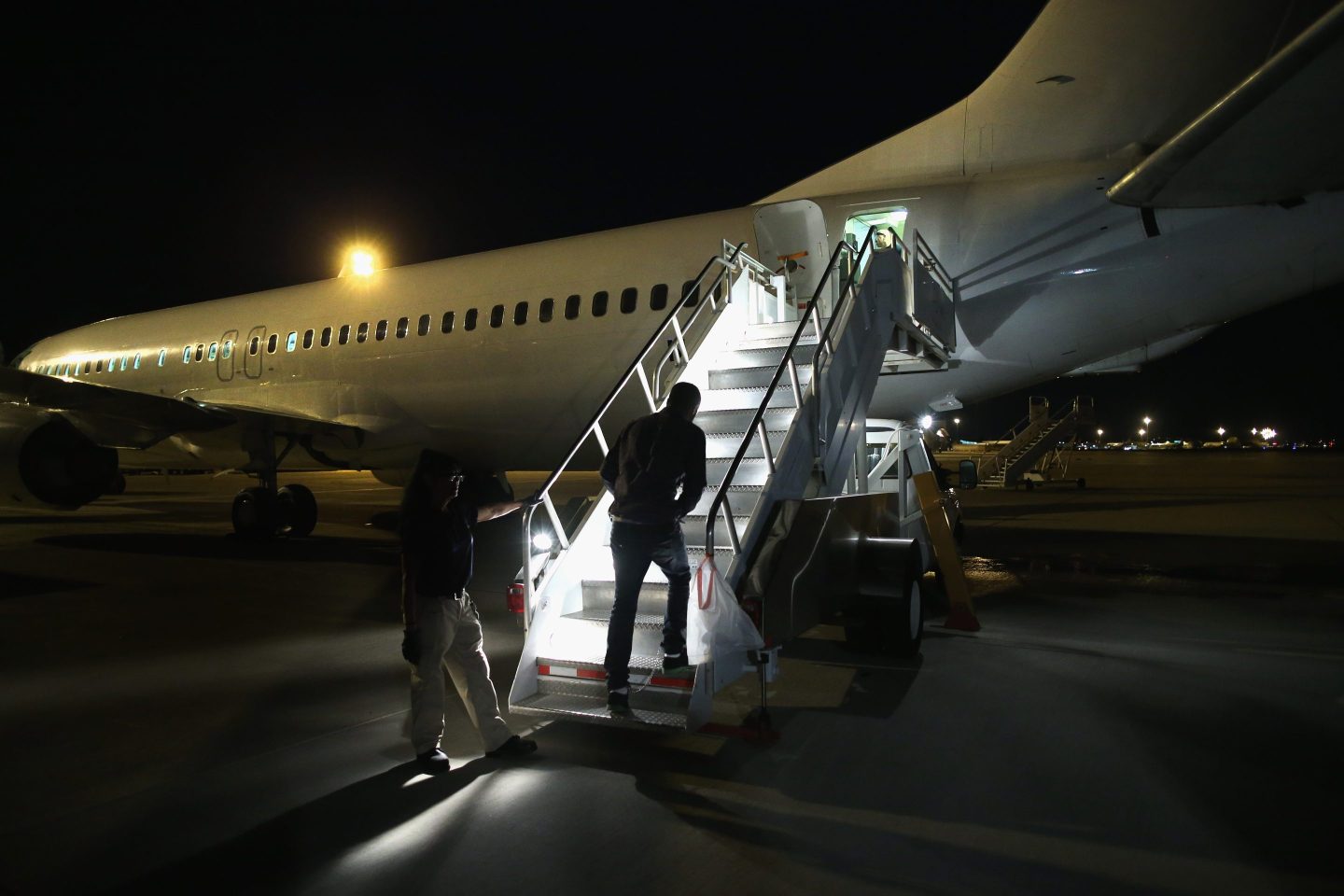 Since mid-September, deportation contractors have removed more than 7,600 Haitians, including hundreds of children, to Port-au-Prince.
John Moore—Getty Images

President Biden’s administration is continuing to deport Haitians and other migrants who sought refuge under a border bridge last month, returning them to countries they risked their lives to escape. This inhumane and often violent practice reflects official government policy, but is carried out by private charter airlines that also cater to clients with immense purchasing power.

That gives significant leverage to consumers disturbed by how we treat migrants to make these companies withdraw from immigration enforcement.

Most deportation missions are operated by charter companies that also service businesses and individual clients. World Atlantic Airlines flies deported migrants to Haiti, but also charters vacation flights to the Caribbean. Another deportation contractor, iAero, flies sports teams, celebrities, and corporate executives to exclusive events like the Grammy Awards and World Series. These clients may not know they are flying with a deportation contractor but couldn’t be blamed for taking their business elsewhere if they did.

Since mid-September, deportation contractors have removed more than 7,600 Haitians, including hundreds of children, to Port-au-Prince—a city engulfed in poverty and gang violence. Thousands were removed before that, and future flights are planned despite criticism from the United Nations and pleas from the Haitian government that it cannot meet the basic needs of returning migrants.

These removals are based on a “Title 42” public health order, first adopted by former President Trump, that experts say unlawfully suspends the right to seek asylum in the U.S. Health experts denounced that order as “gratuitously cruel, scientifically baseless, and politically motivated,” noting that migrant families are being separated, abused, and emotionally scarred. Senior advisers resigned in protest. Legal challenges are ongoing.

Deportation contractors operate in a system rife with violence. The government’s own records document complaints that border agents sexually assaulted a minor, propositioned a detainee for oral sex, and denied medical care to a migrant who’d been bitten by a guard dog. Migrants on a plane routed to Somalia reported being kicked and dragged by federal agents and soiling themselves after being denied access to the bathroom. Others were allegedly stripped naked, shackled, choked, shocked, punched, left with broken bones, and tossed onto a plane like “sacks of vegetables.” One migrant was punched in the head so hard he was knocked unconscious, and his brain swelled.

Charter companies would be right to say that legal responsibility for such abuse rests with federal agents who carry it out. But a company that profits off a system poisoned by violence should not be rewarded with business from clients who care about basic human dignity or human rights.

Nor should deportation companies be credited with solving a supposed immigration “crisis” by deterring others from coming here. What fate awaits people forcibly returned to Haiti, where poverty is endemic and there’s not enough food? Where entire neighborhoods have been displaced by gang violence, or taken over by drug lords and gun runners? Where people can’t leave their homes without fear of being kidnapped? Where schools are shut, rivers are dry, and crops are failing? Where COVID-19 has yet to be controlled? Deportation contractors are not helping to solve an immigration crisis, they are worsening a humanitarian disaster, and contributing to the desperation that fuels repeat cycles of migration.

Travelers should weigh the true cost of flying with a deportation contractor. Athletes must accept that they are sitting in a seat perhaps last occupied by a migrant bloodied from abuse, or a parent taken from her child. Celebrities and corporate VIPs who’ve used their public image to promote human rights sacrifice their credibility the moment they board the plane. And everyday consumers should take care not to enrich a company that exploits vulnerable people for profit.

President Biden may eventually slow the pace of removals to Haiti, but deportation contractors will continue doing the government’s dirty work until it hurts their bottom line.

Consumers can tip the scales. High-profile clients can give deportation contractors a choice: Remove yourself from immigration enforcement, or lose a profitable book business and the marketing opportunity it represents. Students who bravely defended DACA and fought for the rights of refugees can demand a commitment from their schools and athletic departments that deportation contractors would not receive a single penny of their tuition dollars. Alumni associations can condition future giving. Vacation travelers can amplify their message through social networks and online communities.

Deportation contractors may not be motivated by the fate of migrants transported on their planes, but they are motivated by money—and the threat of losing it may be enough to force their hand.

Kathleen Bergin is adjunct professor of law at Cornell.