Japan’s ‘safe’ prime minister pick may be a risky bet 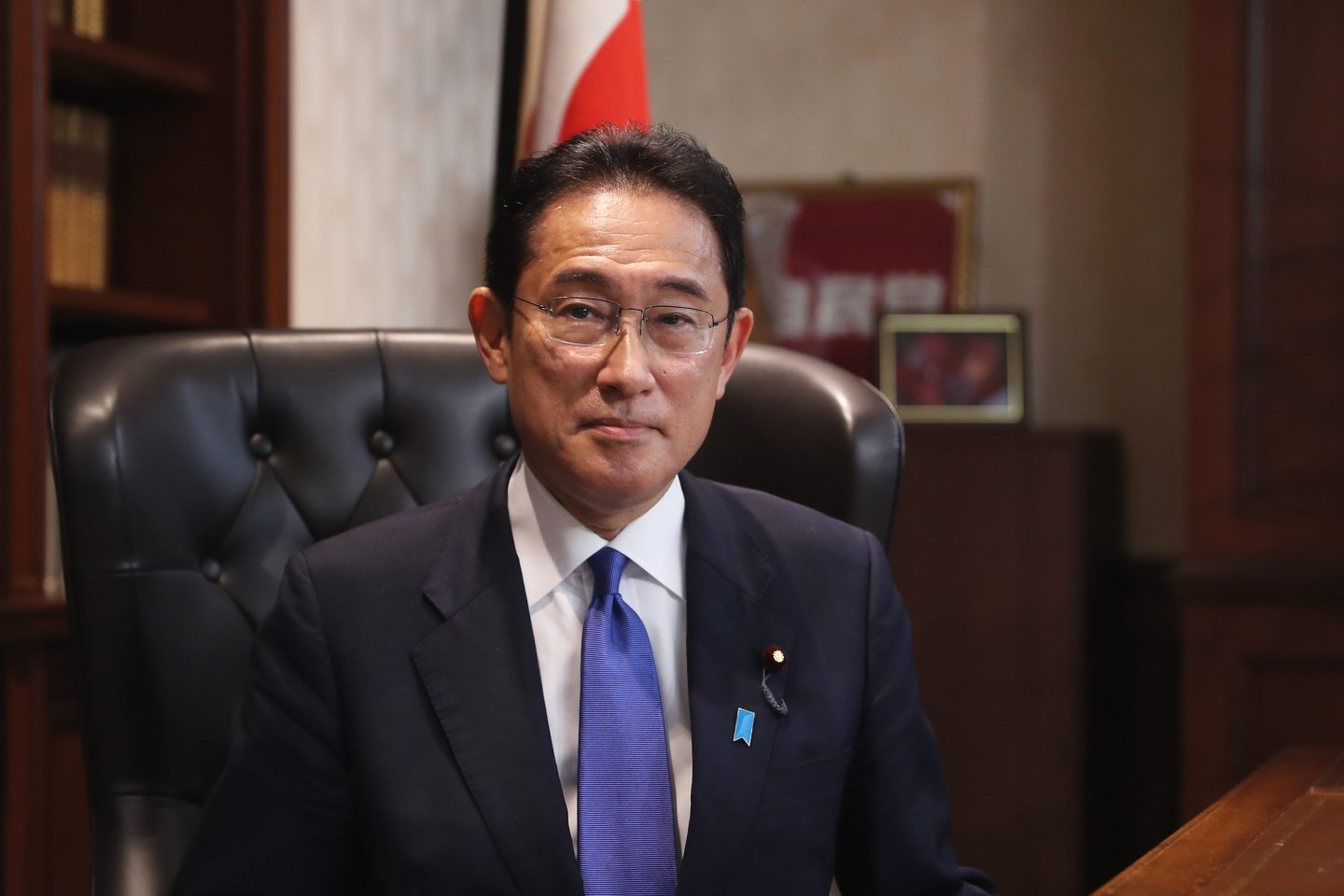 Fumio Kishida, newly elected leader of the Liberal Democratic Party (LDP), sits at his office inside the party's headquarters in Tokyo, Japan, on Wednesday, Sept. 29, 2021.
Du Xiaoyi—Xinhua/Bloomberg via Getty Images

A magnitude 6.1 earthquake struck northern Japan on Wednesday afternoon, shaking the northeastern coast of Japan and sending small tremors through Tokyo. But even as the ground beneath Tokyo wobbled, Japan’s old guard tightened its political grip over the country’s capital.

On Wednesday, Japan’s Liberal Democratic Party elected former foreign affairs minister Fumio Kishida as president of the party. Kishida, 64, has been called a ‘status quo’ candidate, known for his soft-spoken demeanor—or “dull personality,” as the Economist puts it—and preference to lead through consensus building rather than top-down dictums. “Kishida is a vote for stability,” says Sebastian Maslow, a senior lecturer in international relations at Sendai Shirayuri Women’s College.

Kishida’s LDP victory was not assured in a unique election in which four candidates—including two women for the first time ever—made bids to become the leader of Japan’s most powerful party. But ultimately Kishida defeated the popular and outspoken vaccine tsar Taro Kono in a run-off after neither candidate garnered majority support in the first round of voting. Kono, 58, represented generational change and offered a more comprehensive vision for how to reform Japan’s government. But Kono’s commanding lead among rank-and-file party members was not enough to make up for Kishida’s strong support among Japanese lawmakers.

Kishida is now all but guaranteed to replace former LDP president and outgoing Prime Minister Yoshihide Suga when Japan votes in its general election, to be held no later than late November, due to the LDP’s stranglehold on Japanese politics.

On Wednesday, Kishida seemed intent on defying his status quo reputation when he offered a vision for how he’ll lead Japan. He pledged to spend hundreds of billions of dollars on a pandemic relief package and hinted at a new ‘Kishidanomics’ agenda.

“I want to build a new form of capitalism,” Kishida said at a Wednesday press conference, explaining that creating a “virtuous cycle of growth and distribution” will be the centerpiece of his economic agenda.

A pandemic relief bill, combined with a resurgent vaccine campaign and a subsiding wave of COVID-19 infections, may give Kishida a grace period to build popular support. But Kishida’s chances of enacting ‘Kishidanomics’ or other deeper reforms may be constrained by the forces that are bringing him to power. In Wednesday’s run-off election, third place challenger Sanae Takaichi and her powerful backer, former prime minister Shinzo Abe, threw their support behind Kishida, which clinched his victory.

Now Kishida must return the favor.

“He will only be able to operate within the parameters of the Abe legacy,” says Maslow. Even as Kishida has touted his own economic platform, he says it will largely stick to Abe’s three fundamental legacies of bold monetary policy, flexible fiscal policy, and growth strategies.

In addition to steering Japan’s economy through a COVID-19 crisis that triggered the downfall of outgoing Suga, Kishida is under pressure to challenge China while maintaining economic ties, address Japan’s demographic time bomb and shrinking population, and modernize an inefficient government bureaucracy that has shown little appetite for digitization or change.

Simply carrying on the policies of past administrations may not be enough to steward Japan into the future.

“Those who lead by consensus often end up preserving the status quo. Japan cannot afford to lose any time in tackling the coronavirus and myriad other setbacks,” writes Naoya Yoshino, the Nikkei Asia’s political editor. “As leader, Kishida’s biggest responsibility is not to ensure stability within the LDP. Rather, he must deal with crises head on and resolutely guide necessary reforms to fruition.”

This edition of Eastworld was curated and produced by Yvonne Lau. Reach her at yvonne.lau@fortune.com.

The 2022 Winter Olympic Games in Beijing will allow spectators—but only those residing in mainland China. All spectators must also meet specific COVID-19 countermeasures that will be released at a later date, the International Olympic Committee (IOC) said in a Wednesday release. Beijing and the IOC aren’t requiring athletes and other Games participants (trainers, volunteers and media) to be fully vaccinated, but those who aren’t must serve a 21-day quarantine upon arrival in Beijing. All Games participants will also be subject to a "closed loop system," meaning they can only travel between the Games venues for "training, competitions and work." Fortune

China’s current energy crunch is hurting global supply chains, which have faced pressure since the COVID-19 pandemic began. This week suppliers across China—including chip makers and those working with Apple and Tesla—announced temporary production suspensions. Beijing’s ambitious climate policies forced local authorities to ration power, a main contributor of the recent widespread power cuts. But China's power producers in the north are also facing surging coal prices, while those in the south are grappling with a low hydropower supply. Fortune

Cash-strapped property developer Evergrande will sell nearly 20% of its stake in Shengjing Bank to a state-owned firm in a $1.5 billion deal, a signal that the Chinese authorities are trying to help stem Evergrande’s financial fallout. One of Evergrande’s main creditors, Shengjing Bank has demanded that the developer use the stake sale proceeds to repay the funds it owes the lender. As of the first six months of 2020, Shengjing Bank loaned around $1 billion to Evergrande, accounting for approximately 1.2% of the lender's total loans, according to brokerage CCB International. Wall Street Journal

Living with the virus

Singapore—which has an 80% vaccination rate—is sticking with its long-term reopening plan even as COVID-19 infections surge, potentially proving that the “living with the virus” model can work. As of Monday, Singapore’s seven-day average of COVID cases reached 1,545—its highest daily average since the pandemic began. But Singapore averaged only three deaths per day last week—and as long as the city’s death toll remains low, Singapore can “set an example for how other countries… can emerge from the pandemic,” Grady writes for Fortune. The city did post a record eight deaths on Wednesday, which could test the government’s commitment to a full reopening. Fortune

China tech stocks – Chinese tech stocks are falling again after China’s state media released yet another barrage of editorials calling for even tighter regulation of the country’s digital economy. Hong Kong’s Hang Seng Tech Index dropped as much as 2.3% on Thursday, moving closer to another record low; Alibaba and Tencent lost at least 2.4% each, while game developer NetEase plunged 6.3%, its largest loss in three weeks.

Vietnam – Vietnam’s economy shrunk by 6.17% in the third quarter of this year—a record quarterly slump as COVID-19 curbs hit business and manufacturing, according to Wednesday numbers from the country’s General Statistics Office. Vietnam’s services sector contracted 9.28%, and the industrial and construction sector fell 5.2% from the same period a year earlier. The Southeast Asian nation has been battling a surge in infections since April, which prompted the government to lock down major cities and companies to suspend production.

People’s Bank of China – China’s central bank continues to pump liquidity into the country’s financial system to meet cash demand ahead of China’s Golden Week holiday starting Oct. 1, and to soothe market worries over Evergrande contagion. On Wednesday, the People’s Bank of China pumped in a net injection of $6.2 billion. Since Sept. 17, the central bank has added $116 billion via open market operations.

American streaming giant Netflix says it has contributed $4.7 billion to South Korea’s GDP and helped add 16,000 jobs in the country from 2016 to 2020, according to a Tuesday report jointly released by Netflix and Deloitte. Netflix entered the South Korean market five years ago; and as of 2020, the company has directly invested $650 million in the country’s creative industries and introduced 80 Korean television shows and films on its platform. And Netflix is betting that the “Hallyu wave”—the global popularity of South Korea’s entertainment exports—will grow even more; the company will invest around $464 million in Korean content in 2021, alone. Netflix’s “Squid Game,” a Korean TV survival thriller, recently became the platform’s No. 1 show in the world.