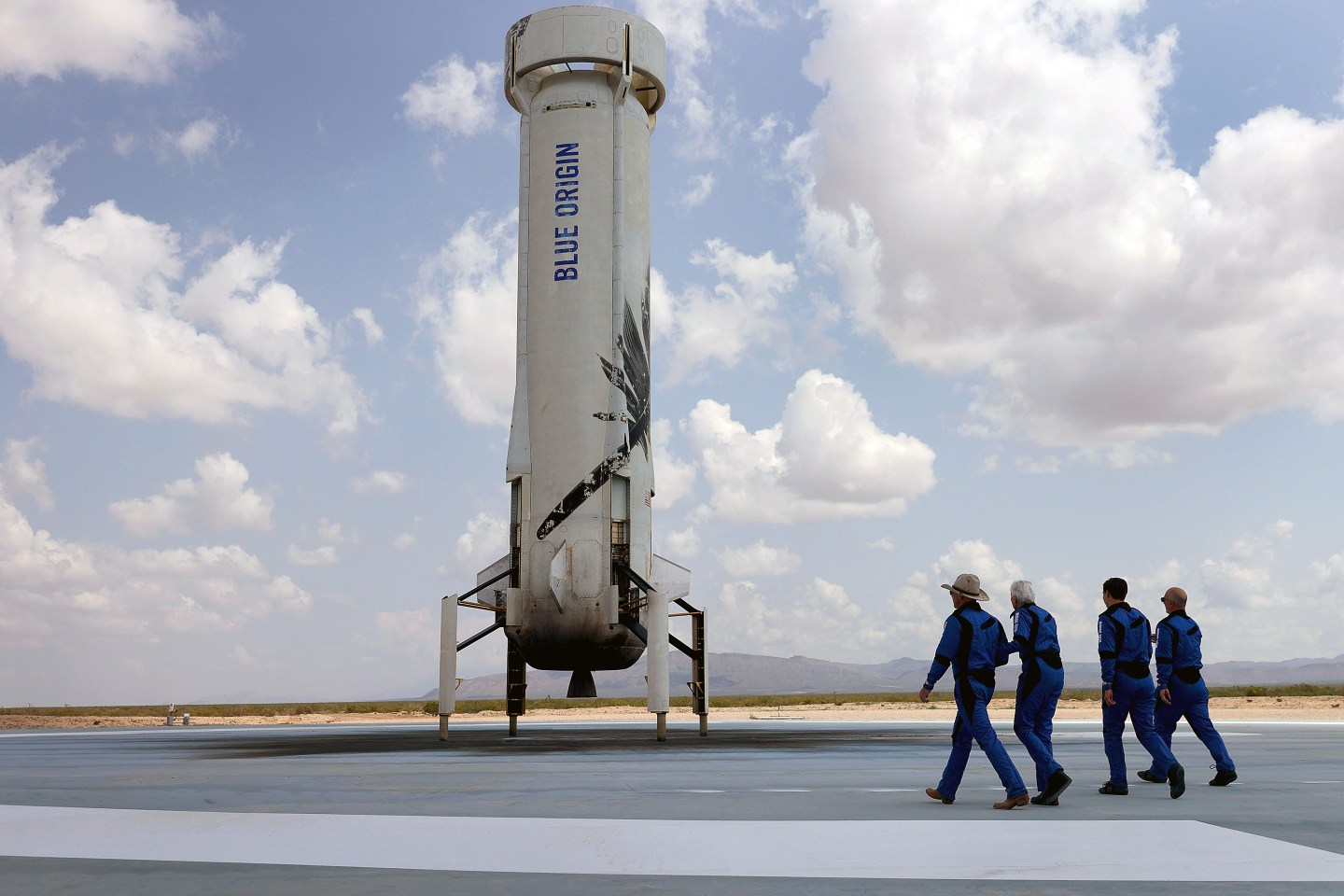 Since she was young, Ally Abrams has been fascinated by space. “I love thinking about the future—the expansive universe, how tiny I am, and all those philosophical conversations,” she says.

When she joined Jeff Bezos’s commercial spaceflight company Blue Origin in public relations in 2017, Abrams felt a sense of homecoming. “This is my mother ship,” she remembers thinking. “I thought I would work at Blue Origin forever.”

But when Blue Origin’s rocket New Shepard launched into space in July in the company’s first human spaceflight mission—with Bezos on board—Abrams, at home in Seattle, couldn’t bring herself to watch. “It was painful,” she says now.

Abrams, who was fired by Blue Origin in 2019, is one among the group of current and former Blue Origin employees who have written a public letter describing what they call a “toxic” culture at the Amazon founder’s commercial space business. “If this company’s culture and work environment are a template for the future Jeff Bezos envisions, we are headed in a direction that reflects the worst of the world we live in now,” says the letter. According to the letter, the group behind the statement is composed of 21 people, most of whom are ex-employees, including both former Blue Origin engineers and former members of the company’s corporate staff (Fortune has viewed the full list of signatories). The letter was published Thursday on the website of Lioness, an online platform that often works with whistleblowers. Abrams appeared on CBS Mornings on Thursday in an on-camera interview about the open letter and its allegations.

Fortune viewed the letter before publication and spoke to five of its signatories; all besides Abrams wished to remain anonymous, citing nondisclosure and non-disparagement agreements, fears of retaliation by Blue Origin, and concern for their future careers in the tight-knit space industry.

Blue Origin did not respond to specific allegations but says in a statement that the company “has no tolerance for discrimination or harassment of any kind,” adding, “We provide numerous avenues for employees, including a 24/7 anonymous hotline, and will promptly investigate any new claims of misconduct.”

The allegations in the letter range from sexism in the corporate office to safety concerns about Blue Origin rockets. The letter’s signers say they worked across New Shepard and New Glenn missions as well as in test and flight operations, advanced development programs, and human resources.

Multiple leaders at Blue Origin, the employees say, have been “consistently inappropriate with women.” One executive, they allege, had a pattern of addressing women with terms like “baby girl” and “sweetheart” and asking them about their dating lives—behavior that led female employees to often warn new hires to avoid him, they say. That executive, they allege, was fired after groping a female subordinate. (The group did not name the executive in their letter.) When contacted by Fortune, Blue Origin did not respond to this allegation or any other specific allegation related to employee or ex-employee behavior.

A separate executive, the group alleges, was reported to human resources multiple times for sexual harassment but remained in positions that put him in contact with new employees, including a senior hiring committee role.

The ex-employees also express concerns about the safety of Blue Origin spacecraft.

The employees write that “making progress for Jeff” on rocket launch schedules took precedence over safety concerns that would have slowed down the process. Women were often the ones to raise those concerns, employees say, and were “demeaned” for doing so. The company did not respond to safety concerns raised in the letter. Its July New Shepard flight was its 17th successful launch.

A work environment that stifles “dissent” contributes to those safety fears, the employees write—and that pattern continues after workers leave the company, they say. Many of the ex-staffers have signed strict nondisclosure and non-disparagement agreements; in her later role as head of employee communications, Abrams says she was tasked with handling the rollout of more restrictive employee contracts including an arbitration requirement and non-disparagement clause.

The 21 employees write that they nearly unanimously agree they would not fly in a Blue Origin vehicle, citing the danger of this “suppression” of opposing viewpoints and their knowledge of how teams at the company are “stretched beyond their limits.”

By writing this letter, this group of employees say they hope to see change and accountability at Blue Origin. They believe the commercial space industry should have greater government oversight (the industry is regulated by the Federal Aviation Administration).

This group also expresses concerns about the billionaire space race and the moral implications of a small group of ultrawealthy men shaping the future of humanity beyond planet Earth.

The Blue Origin workforce, which is led by CEO Bob Smith, is overwhelmingly white and male, employees say. Senior technical and program leaders, they say, are exclusively men. (The company does not publish any public information about the gender or racial background of its management team or other employees and did not respond to requests for such information from Fortune.)

Such a workforce would not be uncommon in the space industry. “It hasn’t been very diverse,” Timiebi Aganaba, an assistant professor of space and society at Arizona State University, says of the industry. “While there are just a few customers, and the customers are really elite, then so the workforce will be.”

Today, 21-year-old Blue Origin has roughly 3,500 employees who work between Washington, Alabama, Florida, and Texas, often on multimillion-dollar contracts such as for NASA’s lunar landers.

The company, meanwhile, describes its mission as “enabling a future where millions of people are living and working in space to benefit Earth.”

In their letter, these employees write that many members of this group are terrified of “speaking out against the wealthiest man on the planet.” (Bezos’s fortune is pegged around $196 billion.)

Abrams, who has chosen to put her name on the record, received a letter from Blue Origin in the week prior to the open letter’s publication that she shared with Fortune stating that she would be liable to pay back thousands of dollars in severance as well as legal fees for violating her separation agreement’s confidentiality and non-disparagement clauses. Blue Origin did not respond to a request to verify the letter.

The end of her time at Blue Origin came, she says, after she pushed back about the more restrictive employee contracts; she protested, especially, that a proposed arbitration requirement would apply in situations of sexual harassment or discrimination. In its letter to Abrams this week, Blue Origin said she was fired for “poor performance.” In its public statement, the company added that Abrams was “dismissed for cause two years ago after repeated warnings for issues involving federal export control regulations.” Abrams says she “never received any warnings, verbal or written, from management regarding issues involving federal export control regulations.”

Abrams, like many of her cosigners, remains enthusiastic about the potential for humans in space. She questions, however, the capability of Blue Origin to equitably bring that vision to life.

“Bezos and the rest of the leadership at Blue Origin must be held to account, and must learn how to run a respectful, responsible company before they can be permitted to arbitrarily use their wealth and resulting power to create a blueprint for humanity’s future,” the group writes in the letter.

“I believed we were saving humanity,” reflects Abrams now of her time at Blue Origin. “We’ve had to grieve losing our dreams—or realizing they never existed in the first place.”