When will China overtake the U.S. as the world’s largest economy? Maybe never 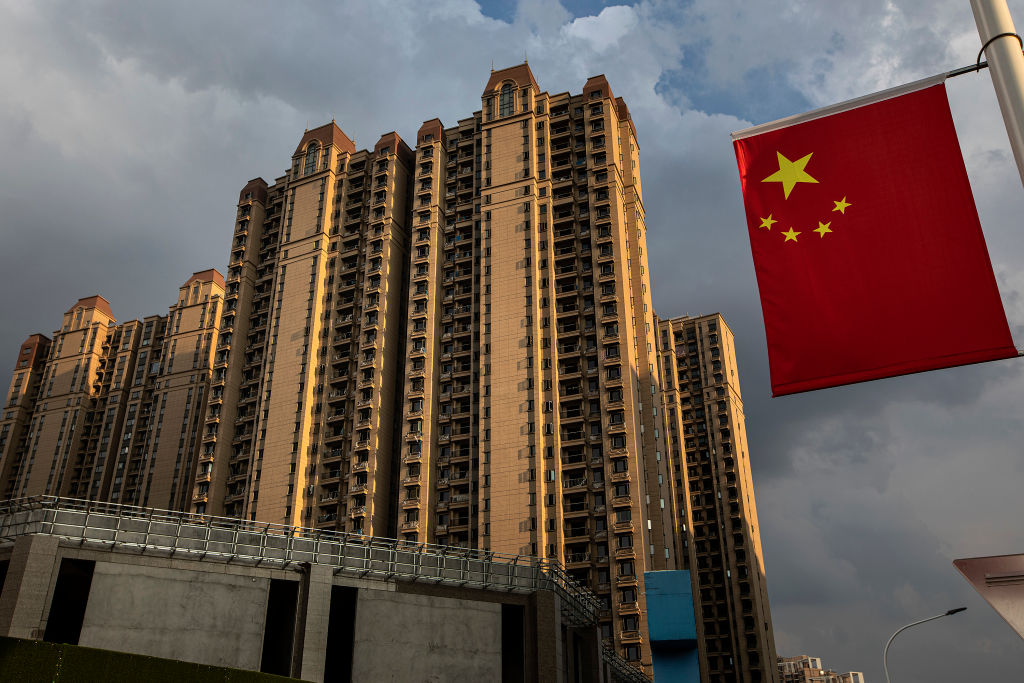 We’ve had a torrent of important China-related developments since the last Eastworld newsletter: Evergrande missed an $83.5 million interest payment due on an offshore bond and scrapped a Shanghai listing for its electric vehicle subsidiary; the leaders of the U.S., Japan, India, and Australia convened in Washington for the latest Quad meeting; China’s power crunch spread from manufacturers to ordinary households; and the U.S. and China exchanged diplomatic hostages, as moves by the Biden administration allowed Canadian authorities to release Huawei Technologies CFO Meng Wenzhou, and Beijing immediately reciprocated by freeing “the two Michaels,” Canadian citizens detained in China on espionage charges.

You’ll find links to all those stories below.

But if you read only one thing about China this week, I’d suggest this Bloomberg essay by Stanford historian Niall Ferguson. It’s nominally about Beijing’s handling of the Evergrande mess. Ferguson makes the case, as we have at Fortune, that while Evergrande may go bust, its implosion will be a “controlled demolition” unlikely to trigger a “Lehman moment”—i.e. a system-wide global financial crisis similar to the one that followed the collapse of Wall Street’s fourth-largest investment bank in 2008.

Well said. But along the way to that rather conventional conclusion, Ferguson reissues an unconventional prediction: that China may never overtake the U.S. as the largest economy in the world. His argument is a more provocative version of the assessment I have suggested in this space for nearly a year now: that the ruling Communist Party’s recent push to strengthen state control over nearly every sector of China’s economy is certain to discourage innovation and take a toll on growth.

But how heavy a toll? That’s the multi-trillion-dollar question. Three years ago, Ferguson famously bet Chinese economist Justin Lin $3,000 that China’s economy, measured by GDP in current dollars, wouldn’t exceed that of the U.S. for at least another 20 years. “I am sticking with that bet,” he writes in his latest commentary, “even if the Lehman Moment for the Chinese financial system never comes.”

That remains a dissenting view. As of the end of last year, China’s GDP totaled about $15 trillion, roughly a quarter smaller than the U.S. GDP of $21 trillion. But an overwhelming majority of economists—not to mention experts at the World Bank, the International Monetary Fund, and most large global investment banks—expect China to surpass the U.S. as the world’s largest economy in current GDP terms by the early 2030s. Indeed, last year, as it became increasingly obvious that China’s economy was bouncing back from COVID-19 earlier and faster than the U.S., a parade of major investment banks accelerated their timelines for when China would overtake the U.S., some by as much as five years.

The math underlying these calculations is straightforward, as this analysis by economists at Bloomberg explains. China’s population of 1.4 billion people is four times larger than that of the U.S. But China’s GDP per capita is less than 20% of the current U.S. level. China’s economic output per head would have to converge only a little with that of the U.S. for the size of China’s total economy to become the world’s No. 1.

Of course, there are other messy variables. Can China’s economy really grow at the 8%-plus rate predicted for this year—or even by Beijing’s more conservative official growth target of 6%? Are China’s official GDP figures reliable? Can Beijing reverse declining birth rates to keep its labor force from shrinking? Might the U.S., now on the verge of adopting the most ambitious government spending program in its history, grow faster than previously assumed?

The trickiest variable of all is productivity—the ratio of humans, machines, and money required to produce each dollar of economic output. Economists have never been very good at forecasting long-term productivity trends.

The Japan comparison infuriates Chinese policymakers, who insist that they have studied the collapse of Japan’s speculative “bubble economy,” know all about it and have learned from Japan’s mistakes. But Xi Jinping is making the same fundamental policy tradeoff embraced by Japanese leaders who, for three “lost decades,” chose to prop up insolvent “zombie banks” in the name of financial and social stability. (I know I said read only one thing, but if you doubt the Japan comparison, you must read one more: this outstanding article, entitled “Look to Japan for Lessons on Evergrande,” by Financial Times columnist Gillian Tett.)

Washington Post columnist Megan McArdle is entirely correct in arguing that the true danger to China’s economy isn’t that debt-riddled Evergrande will collapse; it’s that it won’t.

A footnote to the Evergrande debate is that this month a slew of private economists—spooked not only by the developer’s travails but also the regulatory crackdown, the power crunch, and flurry of negative consumer indicators—have signaled plans to revise down China GDP forecasts.

I disagree with Niall Ferguson on many things. But as for his wager on the Chinese economy? I wouldn’t bet against him.

American businessman John Thornton met with Chinese vice-president Wang Qishan in Beijing shortly after U.S. President Joe Biden entered the White House earlier this year. Thornton, one of few Americans with access to top Chinese government leaders, helped set the stage for meetings between U.S. and Chinese officials in the following months. Wang also told Thornton that it's the U.S.'s responsibility to repair its relationship with China after years of turmoil. “The ball is now in the U.S.’s court” regarding relations,” Wang said, according to a source of the South China Morning Post.

On Saturday, Huawei executive Meng Wanzhou enjoyed a hero’s welcome upon her return to Shenzhen, hours after she struck a deal with U.S. prosecutors to secure her release from Canada. Michael Spavor and Michael Kovrig, two Canadians that have been in prison in China under espionage charges since shortly after Meng’s arrest in 2018, were released from Chinese prison and sent back to Canada hours after Meng’s flight took off. The Wall Street Journal reports that her deal with U.S. prosecutors to acknowledge wrongdoing in violating U.S. sanctions against Iran and avoid U.S. extradition helped free Spavor and Kovrig. The U.S. government on Monday denied that Meng was freed as part of a ‘prisoner swap.’ Wall Street Journal

On Wednesday, Japan’s Liberal Democratic Party will host a leadership election whose winner is all but guaranteed to become Japan’s next prime minister in an upcoming general election. Ahead of the election, vaccine tsar Taro Kono is the favorite to win, with a 23-point lead over foreign minister Fumio Kishida among rank-and-file voters, who will account for half of the share of votes in the election. The other half will be decided by the LDP’s 382 Diet members. In that bloc, Kishida has more than 30% support compared to Kono’s 20%. Japan Times

On Friday, leaders of the U.S., India, Japan, and Australia met at the White House for the first in-person ‘Quad Leaders Summit.’ The meeting did not mention China specifically, but analysts see the group’s formation as an effort to counter China’s influence in Asia, and the group pledged to stand for “democratic values” in the region. India also pledged to send 8 million vaccine doses to Asia by the end of October as part of the Quad’s commitment to supply the region with 1 billion doses by next year.

Evergrande – On Monday, the Shenzhen government announced that it is investigating the wealth management unit of embattled property giant Evergrande. Over 80,000 people spent $15.47 billion on wealth management products from Evergrande in the last five years, and some $6.2 billion of those investments remain outstanding. The property giant’s debt troubles have continued to mount since missing deadlines on $83.5 million worth of interest payments last week and scrapping Shanghai IPO plans on Friday for its electric vehicle unit amid a “serious shortage of funds.”

Squid Game – The Korean Netflix show Squid Game is a smash hit, becoming the most popular show on Netflix’s global and U.S. rankings. In Korea, investors are snapping up entertainment stocks in companies with ties to the show. Bucket Studio, which holds a stake in the firm representing Squid Game’s lead actor, is up nearly 60% since Friday, while Showbox Corp., which has uncertain ties to Squid Game’s production company, has jumped 33%.

China crypto – Chinese cryptocurrency holders remain bullish on buying cryptocurrencies days after China announced its latest order to ban all crypto transactions in China, root out crypto mining operations, and close a loophole that allowed citizens to maintain accounts in offshore exchanges. Chinese traders say they are continuing to buy crypto assets like Bitcoin via centralized and over-the-counter exchanges in China.

BPCL – The Indian refiner Bharat Petroleum Corp announced Monday that it will invest $13.5 billion over the next five years in renewable energy and alternative fuels as part of a transition to a low-carbon future. The state-run firm, which is India’s third-largest refiner, believes the transition to cleaner energy will de-risk it from volatility in global energy markets.

Chinese households are beginning to feel the pinch of Beijing’s push to decarbonize the economy by 2060, as energy shortages are leading to blackouts across the country and forcing companies like Apple and Tesla to close factories. In the south, China is running low on hydropower because major firms have relocated to hydro-rich Yunnan, straining supply. In the north, provinces have begun rationing power amid rising coal prices and an inability to meet emission reduction targets.