The Congressional Black Caucus is more important than ever 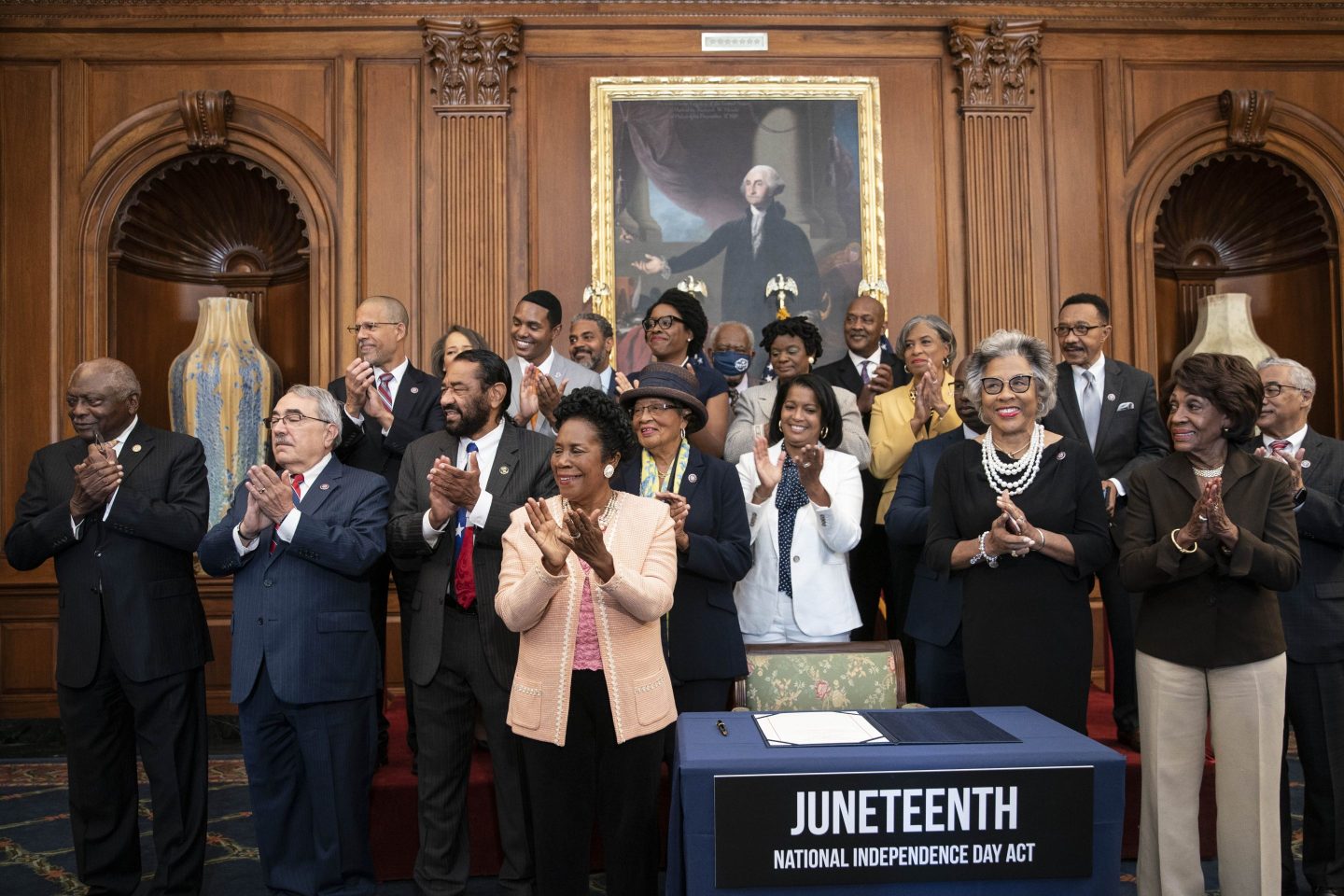 Members of the Congressional Black Caucus during a bill enrollment ceremony in Washington, D.C. "CBC leaders are all too aware of the deficits the Black community faces, and they are advancing legislation today to seeks to address them," writes Robert F. Smith.
Sarah Silbiger—Bloomberg/Getty Images

As the Congressional Black Caucus marks the 50th anniversary of its founding this month, we should all take into consideration the words of one of its most vaunted members, the late civil rights leader and congressman John Lewis, who famously wrote that the fight for equality “is the struggle of a lifetime, or maybe even many lifetimes, and each one of us in every generation must do our part.”

The CBC has always followed Lewis’ moral compass and fought to make the United States a more just and equitable place for Black Americans. It has been on the front lines of every movement for racial equality in recent history, including the current movement against police brutality. And the caucus’s members continue to fight against the vast inequities Black Americans face in almost every aspect of American life—a dearth of education and workforce development opportunities, the vast gap in access to digital tools, limited access to capital, and the fact that minority and women-owned businesses are routinely sidelined from federal contracting opportunities.

None of these problems exist in a vacuum. They all are interconnected. For example, the lack of access to digital tools means that many educational opportunities don’t exist for Black Americans. Without a clear path to earning a higher education degree, the chances of improving your financial status or gaining access to capital are severely hindered. This is a problem that plays out from generation to generation in a vicious cycle, especially throughout the South where almost 60% of Black Americans live.

That’s why the CBC’s leading role in the fight for economic and social justice, shaping policy from Washington, is more important than ever—and we need a clear-eyed view of the challenges ahead. There are three key areas where the CBC continues to work tirelessly for change and where we can all make a big difference in the lives of Black Americans.

One of the best places to start when attempting to overcome these forms of structural racism is with education. Black Americans have always faced more significant hurdles than their white counterparts when it comes to attaining educational opportunities—a fact clearly highlighted by the student debt crisis. Black students owe on average, $7,400 more than their white peers after graduating with a bachelor’s degree, according to the Brookings Institution, and Historically Black Colleges and Universities (HBCUs) generally have much lower endowments than other higher learning institutions.

To help bridge this gap, I launched Student Freedom Initiative earlier this year, which is a non-profit focused on addressing the disproportionate loan burden on Black students. The initiative, which will be available starting this fall at nine HBCUs and include 5,000 new students each year, will offer juniors and seniors majoring in the science, technology, engineering, and mathematics (STEM) fields a more flexible, lower-risk alternative to high-interest private student loans.

Along with educational opportunities, we need to help minority-owned businesses both get off the ground and thrive in a competitive marketplace. It is crucial that these companies have access to cash, financial assets, equitable loans and the tools and machinery needed to operate. One way to improve this access is to work with community development financial institutions (CDFIs), which give capital to people who have often been shut out of the traditional banking system. Doing this will require CDFIs to modernize and go through a technology overhaul to come in line with the overall banking industry. By accomplishing this goal, CDFIs will not only keep up with the broader banking industry, but also ensure that their customers aren’t left behind.

CDFIs are not the only organizations falling behind technologically. Overall in communities of color, one in three families with children lack a high-speed internet connection at home—a rate of disconnection more than 50% higher than that of white families. This disparity affects every aspect of life, as without it, children can’t properly do their homework—or receive remote learning during the pandemic—which puts them at an educational disadvantage and hinders their chances of success later in life. People can’t access telemedicine appointments, or work from home, or even bank online—all of which once again puts communities of color at a major disadvantage and keeps them on the political sidelines.

CBC leaders are all too aware of the deficits the Black community faces, and they are advancing legislation today to seeks to address them. By investing in closing these gaps, we can move the country toward a more equitable future and continue to make progress in the struggle John Lewis dedicated his life to. By helping to set the agenda in Washington, the CBC can continue to play a leading role in driving lasting change.

As poet Amanda Gorman said at President Biden’s inauguration, “We are striving to forge a union with purpose, to compose a country committed to all cultures, colors, characters and conditions of man.” To forge that union, we must close the racial equity gap that has existed in this country since its founding.

Robert F. Smith is the founder, chairman and CEO of Vista Equity Partners.