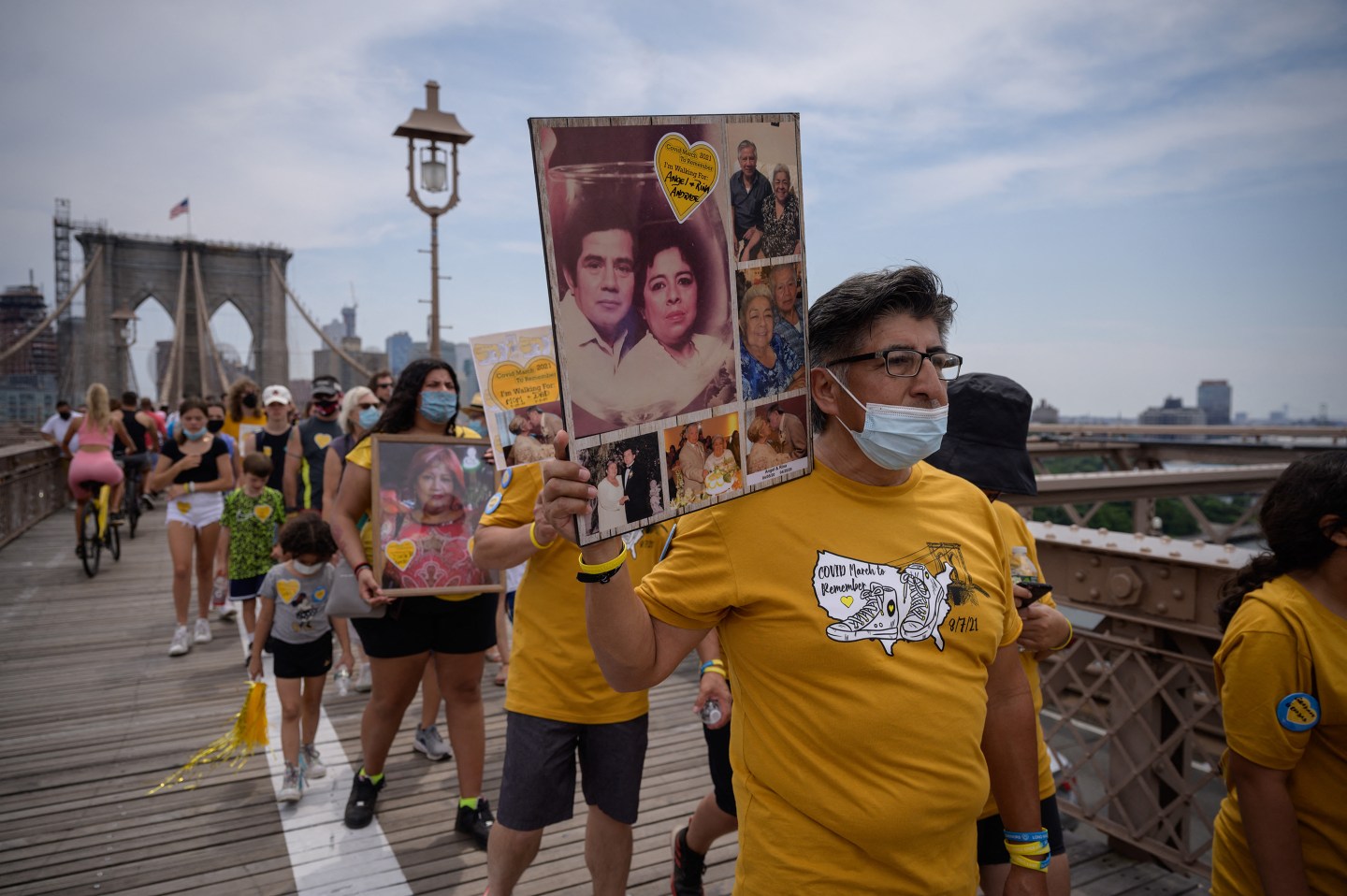 To this day, there are still many people who forget that there were kids and families living and going to school just blocks from the World Trade Center on Sept. 11, 2001—and that among us, there are still kids (who are now adults) who, as a result, don’t know that they are living with post-traumatic stress disorder and related mental health issues such as anxiety, depression, and addiction.

Now, we’ve all been living with COVID-19 for a year and a half, which has made existing trauma-informed states of being even worse and has created a new generation of traumatized children and adults across the country. After surviving something like this, many assume that because a body remains in motion and because people—especially kids—are resilient, everything will simply “go back to normal.” However, our brains and our bodies literally change in response to what we’ve experienced. Despite this, we rarely find out what actually happens to children and adults as they try to move on from a devastating tragedy.

One of the biggest enemies to recovery is the feeling that you are not worthy of that recovery. I was in middle school at I.S. 89 in lower Manhattan, three blocks from the Twin Towers, on Sept. 11. I wrote about it in detail for Fortune several years ago, but it’s important to know that we were in the middle of it all, trying to get home. We were stranded in the neighborhood, just blocks from the fiery remains of the towers, without phones or electricity or anyone to help.

For fear of subsequent attacks, not to mention the toxic substances in the air, we were urged to stay inside our debris-filled apartments. As the rest of the city tried to get back to “normal,” it became very clear to me that no matter how much I wanted that for myself, it was not going to happen. As time went on, my symptoms became more complex. We tried to seek help—over and over again—because we knew something was very, very wrong.

Because I had no idea that my own issues stemmed from my experiences on and after 9/11—which was an ongoing crisis because of where I lived—I didn’t face the obstacle of feeling worthy of help. I faced the obstacle of never being able to find it.

My teenage years were spent in and out of different talk therapists’ offices and psychiatrists’ chairs as I took dozens of medications and sought help for issues that nobody seemed able to fix, which left me feeling drained of hope. But at age 18, I reached out to a cognitive behavioral therapy (CBT) professional, who saved my life and helped me begin to start a new one. CBT gave way to dialectical behavioral therapy, 12-step recovery, and EMDR therapy to reprocess the actual trauma itself.

I was eventually able to figure out who I wanted to be—who I could be—if I relearned how to respond to the world and myself. It took work, and it took years, but I was eventually able to feel safe, happy, and calm in my own skin and in the world around me, and I was able to take that 12-year-old girl who never had a chance to become a woman and raise her to become “me.”

Because I had continued living with a black cloud of smog over my neighborhood, it didn’t make much of a difference to me when we went back to school. However, Lila Nordstrom, who was a senior at Stuyvesant High School on 9/11, directly across the street from my school at I.S. 89, says that resuming classes on Oct. 9, just one month after the attacks, ended up making many students sick. That’s why she founded StuyHealth, an advocacy group representing young adults who were impacted by the events of 9/11 and the resulting cleanup and connecting them with resources to help them take care of their physical health.

Nordstrom, who had asthma at the time, and her classmates were assured that the air was safe. As it turned out, it was not.

So they sat in class as people in hazmat suits wandered in and out of their classrooms testing the air for lead. Students coughed and held their heads in pain, clutching the ID badges the administration had issued to them because, as Nordstrom recalls, they were told that the school itself was now a target, and terrorists and radicals were everywhere.

Nordstrom’s own realization that she had PTSD wouldn’t come until years later, after a panic attack during a Los Angeles traffic jam. She spent years seeking help for physical pain no doctors could explain up until then: It turned out that her body was tensing up severely whenever she heard a plane or helicopter overhead.

Still, she faced pushback during her fight for the rights of her former classmates—many of whom actually chastised her for it, telling her that she was wrongfully taking attention away from first responders. A friend told her that the existence of her organization was insensitive because “she didn’t lose anyone.” People asked whether her father was a first responder, because they “couldn’t fathom” that she was advocating on behalf of herself and her classmates. Because the media narrative around 9/11 often focuses on first responders, community members sometimes feel like they aren’t deserving of or worthy of help or services, says Nordstrom.

“Walking around with a black cloud over your future is as valid a reason to get help as losing someone is. We had to move on with a tragedy in our lives, and we are just as deserving of help, even if we didn’t meet this threshold that people have created of losing someone, or running into the towers like first responders did. We were just kids.”

Nordstrom has spoken to first responders who were not only interested in her story, but unaware of the impact those events had on the physical and mental health of young people who survived. Soon, she says, first responders started telling her story as they lobbied Congress, because they recognized how much we were also impacted.

“The survivor story isn’t worse than the responders’ story. It’s just different,” says Nordstrom. “There’s a sense that we were lesser victims because we weren’t ‘heroes,’ and I think this mentality is bleeding over into other areas this year—that you need to be a hero to qualify for support.”

Similar trauma has been afflicting folks as a result of COVID-19 and other devastating events that took place from 2020 into 2021. The most common groups qualifying for the DSM-5’s PTSD criteria as a result of the pandemic are those who have themselves suffered from COVID-19 and potential death themselves; those who have closely witnessed the suffering and death of family members or clients (in the case of health care workers); journalists; first responders; medical examiners; hospital personnel; and, of course, frontline health care workers.

A recent study found that children experiencing toxic levels of stress or trauma are more likely to have a longer-term impact from their COVID experience and require more specialized care: 71% of parents believe the pandemic has taken a toll on their child’s mental health, and 65% believe mental health consequences will be greater for children than adults.

Jennifer Hartstein, who specializes in adolescent and child psychology, says that because anxiety (which often occurs alongside PTSD) is triggered by uncertainty, it makes sense that many have experienced the past 18 months as one long heightened state of worry.

“We worried about our health, the health of others, both physically and mentally. We worried about our livelihoods, about the children in our lives and if they were going to be okay,” she says, adding that the impact on the body has also been significant, often mirroring the traumatic response of fight or flight.

If the events of the past year and a half are affecting how you’re able to function in the day-to-day, or friends or loved ones have shared that you seem different and that they’re concerned, it is likely a good time to look into finding a therapist who understands your experience and is able to help you actively address your issues.

Gary Brown, a military veteran and therapist who focuses on trauma, didn’t realize he was living with post-combat PTSD until 15 years after his service. On Sept. 11, he was deployed immediately to Ground Zero by the Salvation Army to help provide emotional support for first responders. To this day, though, he maintains that it is never too late to seek help.

“It doesn’t mean you’re crazy; it means you’re a normal person who needs to talk to someone. Trauma is painful, but if you try to say, ‘Oh, I can handle it by myself,’ when you’re still very much impacted, you may find that, as is often the case, if you can’t talk about something, you can’t put it to rest,” he says. “In fact, I wish that the diagnosis of PTSD could be amended to PTSS, with the ‘S’ standing for syndrome instead of disorder. Trauma is often pathologized as something that is neurotic, when in reality, it is a completely normal—and reasonable—response to traumatic events.”

The silver lining of the past year and a half, he continues, has been that the world of telehealth has opened up and allowed for everyone to potentially have access to therapists and specialists no matter where they are geographically.

Before the 10th anniversary of 9/11, I got in touch with former classmates to see whether they had struggled too. Their responses were upsetting. “I panicked if plans changed.” “Small problems to others felt like a tragedy to me.” “I felt branded, wounded, damaged, and crazy.”

They—we—hadn’t talked about it. We didn’t believe anyone would understand. And of course there was the underlying sentiment that said: What right did we have to complain?

Every right. Not necessarily to complain, but to talk about our experiences, to seek help in becoming who we would have been and who we can be when complex symptoms of PTSD are no longer controlling our lives. Yes, we survived, but we lost important pieces of ourselves and gained an entirely new nervous system that was working in a constant fight-or-flight state of overdrive.

“Some questions to ask yourself about your experience after a critical event like September 11 are, ‘Do I find myself trying not to think about that day? Do I still have persistent negative thoughts or feelings around it, or experience intrusive images?’” says Brown.

“I personally don’t expect that I won’t have thoughts or feelings about that day, and there is such a thing as healthy avoidance,” he continues. “But an active fear around those events—or a tendency to look for threats all around you, also known as being hyperalert or hypervigilant—is an indication that this event is still having an impact, and that it is a piece of unfinished business.”

If you did not die or lose a loved one on 9/11 or to COVID-19—or if you did not get tear gas thrown at you during a protest, or if you did not lose your home or become displaced—you can still be very much impacted by these events, and you have every right to find help. You just have to know where to look and where to start.

When we reach out for help, we have to be our best advocates, and that starts with regaining control over our lives after losing so much to something that was out of our control. We all deserve a new beginning and a better life than the one that trauma may have taken hold of.

Helaina Hovitz Regal is a journalist, mental health advocate, and author of the memoir After 9/11.