How we can learn to stop worrying and love market bubbles 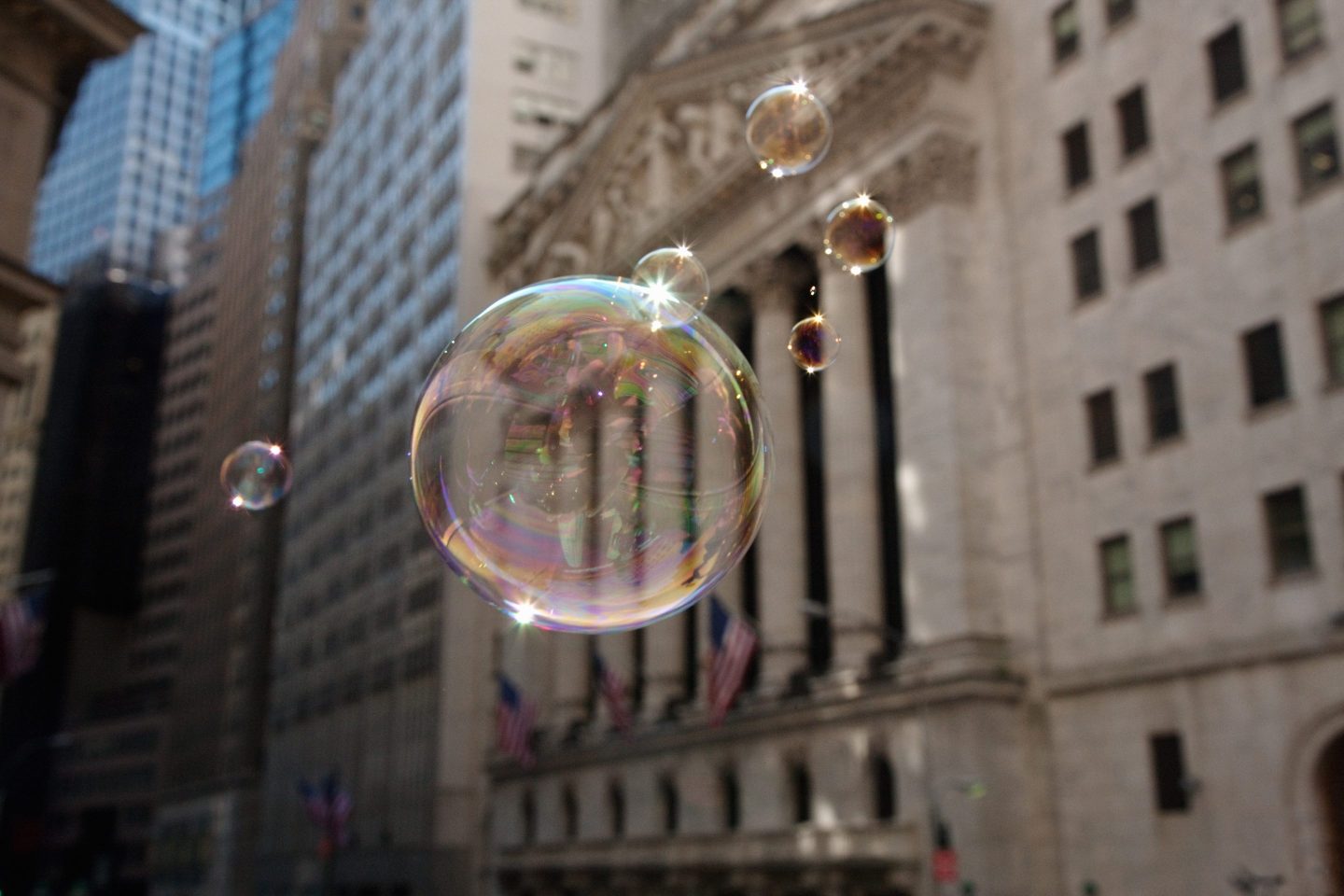 “While the financial losses and economic headwinds that follow in the wake of bubbles have given them a bad reputation, there is more to bubbles than meets the eye,” write the authors.
Getty Images

Inflation has dominated the economic debate of recent months, ranging from fears about runaway price growth to fears that tighter monetary policy could smother the recovery prematurely. Yet neither inflation nor hawkish “policy errors” by the Federal Reserve have ended an economic expansion in the past 30 years—bubbles have. And while the financial losses and economic headwinds that follow in the wake of bubbles have given them a bad reputation, there is more to bubbles than meets the eye.

The fact is that bubbles have become a fixture of modern economic expansions, and the policymaker’s toolkit is better at cleaning them up than preventing them. Yet bubbles come in many shapes and forms, and even the more pernicious ones can leave a positive legacy if they solve collective-action problems and expand the economy’s capacity by accelerating capital formation, laying the groundwork for productivity growth and innovation, or mobilizing labor to ventures of creation.

Like it or not, the modern era is one of economic bubbles. Since the mid-1980s, when structurally high inflation was vanquished and low inflation anchored, all cycles have been turbocharged by bubbles, and two of the last three cycles ended when their bubbles burst. So, it’s neither runaway inflation nor a hawkish Fed that has shaped the cyclical pattern—but the dotcom bubble in the 1990s and the housing bubble of the mid-2000s, both of which materially inflated household wealth and pushed consumption and GDP. Similarly, the post-2008 cycle has seen record valuations of government bonds—fertile grounds for other bubbles to build, had COVID-19 not ended the cycle prematurely.

Cleaning up is easier

As the bubble pattern has taken hold, policymakers have found it invariably easier to operate on cleanup duty than to tackle bubbles preventively. That’s less of a failure than it may seem: Their tools are too blunt to deflate a specific bubble without risking the cycle, and spotting an unsustainable bubble remains exceedingly hard. How high should they have pushed interest rates in the 1990s and 2000s—impacting the whole economy—to deflate the dotcom and housing bubbles? All the while, their mandate remains inflation management and full employment, not capping equity prices, IT investment, or housing activity.

In fact, the most constructive role that policymakers can play is to keep bubbles out of the leveraged finance system, particularly banks, and to ensure that credit and liquidity don’t freeze when they pop. In other words, theirs is a mission of letting the bubbles build positive legacies while limiting the eventual mess and standing ready to clean up—not preventing bubbles. This remains enormously important, because if bubbles are allowed to infect the banking system, the long-lasting economic and political headwinds are likely to overwhelm any positives, which we turn to next.

The word “bubble” has universally bad connotations—excessive, irrational, ending poorly—and much of that is deserved. But they range from the trivial (recall the Beanie Babies bubble of the 1990s?) to significant (the fracking boom) to those with cycle-ending impact (dotcom) to regime-busting (1929).

Nearly 100 years ago the equity bubble of the late 1920s helped usher in the downward spiral of the Great Depression, and it has durably shaped our notion of a bubble. Less than 10 years ago the fracking bubble drove excess capital investment in oil and gas, which was viewed as threatening the economic cycle at the time. But fracking also left the U.S. more energy independent and more agile in oil production, while leading to lower energy prices—all positives from a macroeconomic perspective. Yet such silver linings are not the traits for which bubbles are typically remembered.

In fact, positive legacies are not as isolated as they might appear, even if the immediate consequence of a bursting bubble is always negative, sometimes severely so.

A bubble’s potential for positive legacy depends on whether it leaves the economy’s capacity enlarged. In macroeconomic terms this happens when a bubble has a lasting effect on growing the capital stock, generates productivity growth, or mobilizes labor and talent to its best uses. Let’s look at each in turn.

Regarding greater capital stocks, the positive impact of bubbles is easy to see. Consider railroad lines (as well as canals before them), whose development was accelerated by many bubbles. Railroad bubbles brought recessions when they burst, but they also bequeathed enhanced infrastructure. Similarly, the information and communication technology bubble of the 1990s put a lot of fiber in the ground and under the sea. And while telecom investors didn’t always get paid (recall Global Crossing’s bankruptcy), the infrastructure was there to move the bits that have helped digitize the economy since then. Without the bubbly finance, these would not have occurred in this way.

Regarding productivity growth, the positive legacy of bubbles is also clear. Of course, the term “dotcom” now brings memories of Pets.com or WebVan, the failed grocery delivery startup that burned through hundreds of millions of dollars. But dotcom also brought us Amazon.com—fueling a revolution in how consumers consume. Indeed, several WebVan executives took their learnings to build AmazonFresh, the behemoth’s grocery delivery business. Similarly, clean energy and biotech went through bubbly episodes in the ’90s, ’00s, and ’10s that, while they didn’t always pay for investors, did accelerate innovation, development, and implementation of those technologies. Before the COVID crisis, the boom in biotech venture-capital investment was pointed at as bubbly, yet after the past year anything that accelerated biotech development or capacity seems worthwhile.

Regarding labor, the positive legacy of bubbles is less clear. And yet, consider the gravitational pull that the tech startup scene has today. Easy finance and lofty valuations make recruiting and paying talent much easier—or even possible. And the ability to attract the best creative talent is what makes those projects go from struggling upstarts to transformational ventures, sometimes reshaping an entire industry in the process.

All three macroeconomic upsides are underpinned by the microeconomic impact of bubbles. Frothy finance inspires confidence and perceptions of opportunity, which emboldens risk-taking and attracts entrepreneurs while providing the funds to invest and hire. These dynamics are enhanced by the emergence of networks and ecosystems and with it the tackling of collective-action problems, such as the railroad investment mentioned above that provided much-needed transportation networks.

Today, froth seems ubiquitous—from record highs in equities (which may be justified in a low-real-rate world) to SPAC issuance (where secondary investors should do their diligence carefully) to cryptocurrency (whose institutionalization remains in flux) to every third person in your office, including senior colleagues, going to work for a tech startup. This ubiquity gives many the feeling that this will end poorly—but that need not be the case for two reasons.

First, today the downside of bubbles is more contained. They are less cyclically and systemically threatening, because the froth is outside the levered financial system. This can stay this way if policymakers maintain their vigilance. Second, the upside of bubbles is broader today because the froth is broader, not concentrated in one area of activity, thus also broadening the potential for enhancing the economy’s capacity.

And if we want to entertain the idea of a big concentrated bubble with a positive legacy? Consider a bubble in green technology that could help address the collective-action problem of decarbonization. Such a bubble may not end up delivering strong private returns for all investors, but it has the potential to transform the macro economy in a way and at a speed that few other things can.