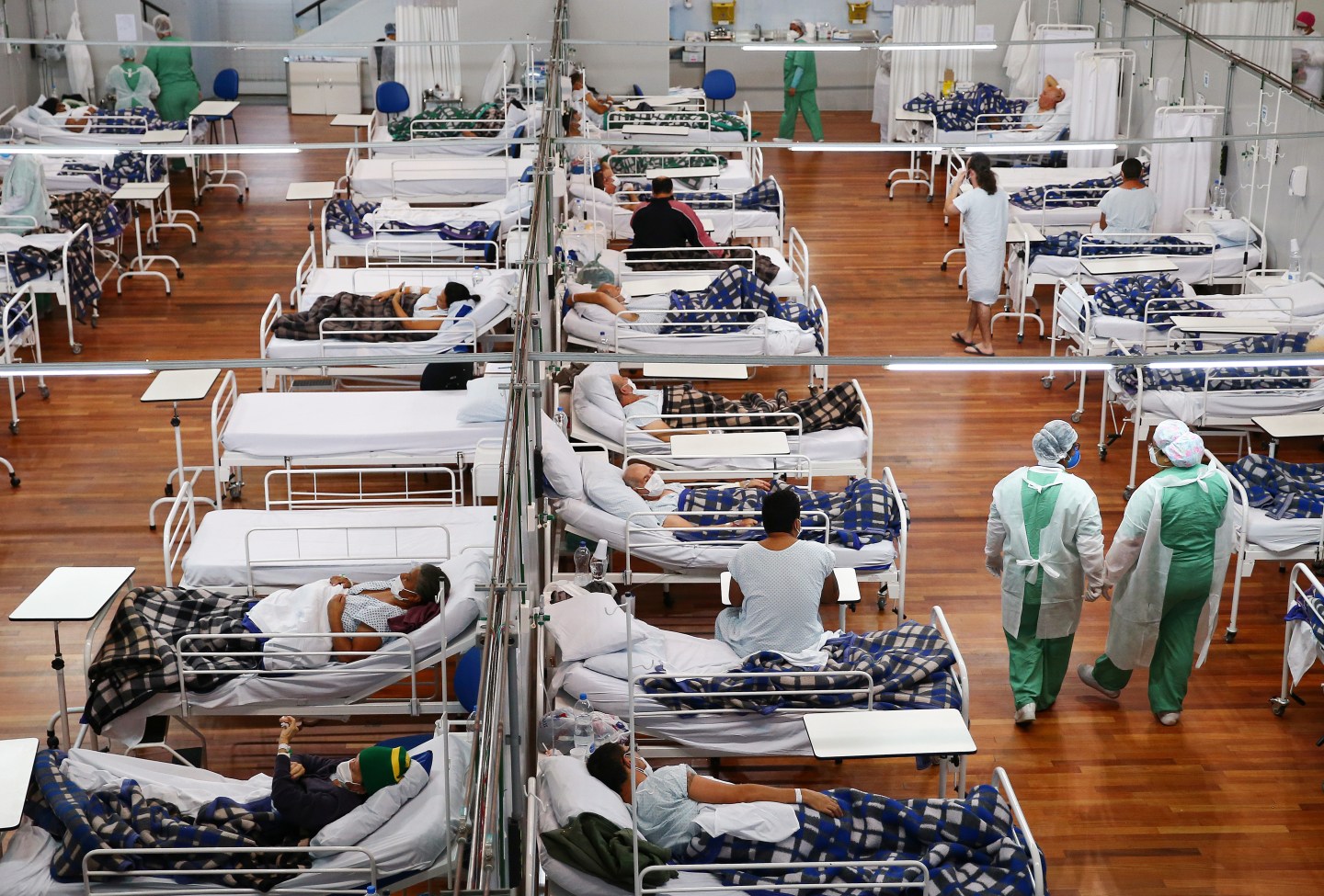 COVID-19 patients at a field hospital in Santo André, Brazil, on May 17, 2021.
Mario Tama—Getty Images

A couple of weeks ago, a friend of mine went in for his second dose of Pfizer’s COVID-19 vaccine. “It absolutely kicked my butt,” he told me. He spent most of the following day on his back, feeling fog-headed and achy, before things returned to normal about 24 hours after that.

That sort of reaction is not uncommon among those going in for their second dose. In my friend’s case, though, he had reason to wonder whether his experience with the second shot was even necessary—because he’d already had COVID himself, about two months earlier.

It is a question with global implications: Does a person with a prior history of COVID-19 really need both doses of either the Pfizer or Moderna vaccine, or will the first dose alone suffice? There’s a growing body of evidence to suggest that a single shot will do—and if that proves out, it could free up tens of millions of doses to be used in countries facing critical shortages of potentially lifesaving medicines. That would help America meet President Biden’s commitment on Monday to send 20 million COVID-19 vaccines to other countries by the end of June.

“I think this evidence is strong, and in theory transitioning to a single dose for people with prior confirmed infection makes sense,” says University of Utah virologist Stephen Goldstein, who specializes in coronaviruses. In an email interview, Goldstein says several studies “strongly indicate that people with prior SARS-CoV-2 infection generate an extremely strong response to the first dose of mRNA vaccine with little apparent further enhancement from the second dose.”

In South Korea, an analysis that included more than 500,000 people age 60 and older found that the Pfizer vaccine was 89% effective in preventing infection just two weeks after the first shot. AstraZeneca’s vaccine, which has not been authorized for emergency use in the U.S., was found to be 86% effective in that same time period. Again, that’s after a single dose, and it’s regardless of prior COVID history.

People who’ve already had COVID-19 are believed to have protective natural immunity and memory that may last for months, and vaccination further boosts this response. Still, to this point, the CDC recommends that people receive both doses of Pfizer or Moderna “to get the most protection,” regardless of personal history.

That’s a lot of second shots. With more than 110 million total COVID infections in the U.S. and a global shortage of vaccine, the doses saved via a one-shot vaccination strategy could be redirected to countries like India, Brazil, and Mexico, where the need is desperate. And patients in these countries could be “fully vaccinated” much quicker—in two weeks—and spared the side effects that often accompany the second dose.

Here’s the theory behind two doses being recommended: In two-dose regimens, the first dose essentially exposes an uninfected person to the virus’s spike protein, generating a muted immune response. The second dose is intended to boost antibody and T cell response. But for those who’ve had COVID-19, the infection itself may have done the work of the first vaccine.

In April, Cedars-Sinai researchers reported that in a study involving more than 260 health care workers, a single dose of the Pfizer vaccine given to those previously infected with COVID generated an antibody response similar to that of uninfected individuals who took the two-dose regimen. A study by University of Pennsylvania researchers, meanwhile, found that a single mRNA vaccine dose provided a “robust antibody response” and strong memory B cell responses in patients who had recovered from COVID-19—but that little benefit followed a second dose. Senior author John Wherry, director of the Penn Institute for Immunology, said in an email that the Penn data “are consistent with the idea that people who experienced natural infection do not benefit immunologically from two doses of mRNA vaccine,” though one dose may be useful in that regard.

And in a letter published in the New England Journal of Medicine, researchers said they had found that individuals who previously tested positive for COVID-19 developed a quick immune response (within days) of their first mRNA vaccine dose—at a rate 10 to 20 times higher than those who were never infected.

“We believe that COVID-19 survivors should only get one dose of mRNA vaccine [Pfizer and Moderna], which would speed the rate of immunization by allowing others to get these additional doses,” the research authors, including eminent Mount Sinai virologist Florian Krammer, wrote in USA Today. Susan Cheng, director of public health research at the Smidt Heart Institute at Cedars-Sinai, told me: “The accumulating data suggest that a single mRNA vaccine dose is likely sufficient for many with prior infection.”

So, why hasn’t the CDC, which did not respond to requests for comment, changed its recommendations? There are several possibilities. First, the duration of protective immunity following a single vaccine shot is unclear, so agency officials could be awaiting further longitudinal data or larger, randomized vaccine trials. “The CDC only tends to change recommendations after a large body of evidence is produced and replicated by many groups,” says Cedars-Sinai researcher Kimia Sobhani.

Goldstein says that practical or logistical arguments may yet be made against a single-dose strategy. Since many people infected with SARS-CoV-2 globally were never properly diagnosed, for example, there might be a need for high-quality commercial antibody testing to confirm the prior infection. (In their op-ed, Krammer and his coauthors wrote that they believe self-reporting by individuals, while admittedly not perfect, could be a feasible public health strategy.)

“The CDC recommendations could be changed if it is possible to implement the new policy effectively,” Goldstein says. And while logistical issues can always impede the success of a nationwide vaccine campaign, several countries, including France, Germany, Italy, and Spain, have employed various single-dose vaccine strategies for those recovered from COVID-19.

While uniformly sticking everyone in the U.S. with two jabs may be easiest and fastest, it’s fair to ask whether it makes for good medicine or best practice. The evidence is growing that some of us may require only a single shot—and growing, too, is the need for those tens of millions of doses in other areas of the world.

Carolyn Barber has been an emergency department physician for 25 years. She is cofounder of the homeless work program Wheels of Change and author of the book Runaway Medicine: What You Don’t Know May Kill You, which was a top-ranked Amazon bestseller in health care administration.