How restaurant design will change post-pandemic 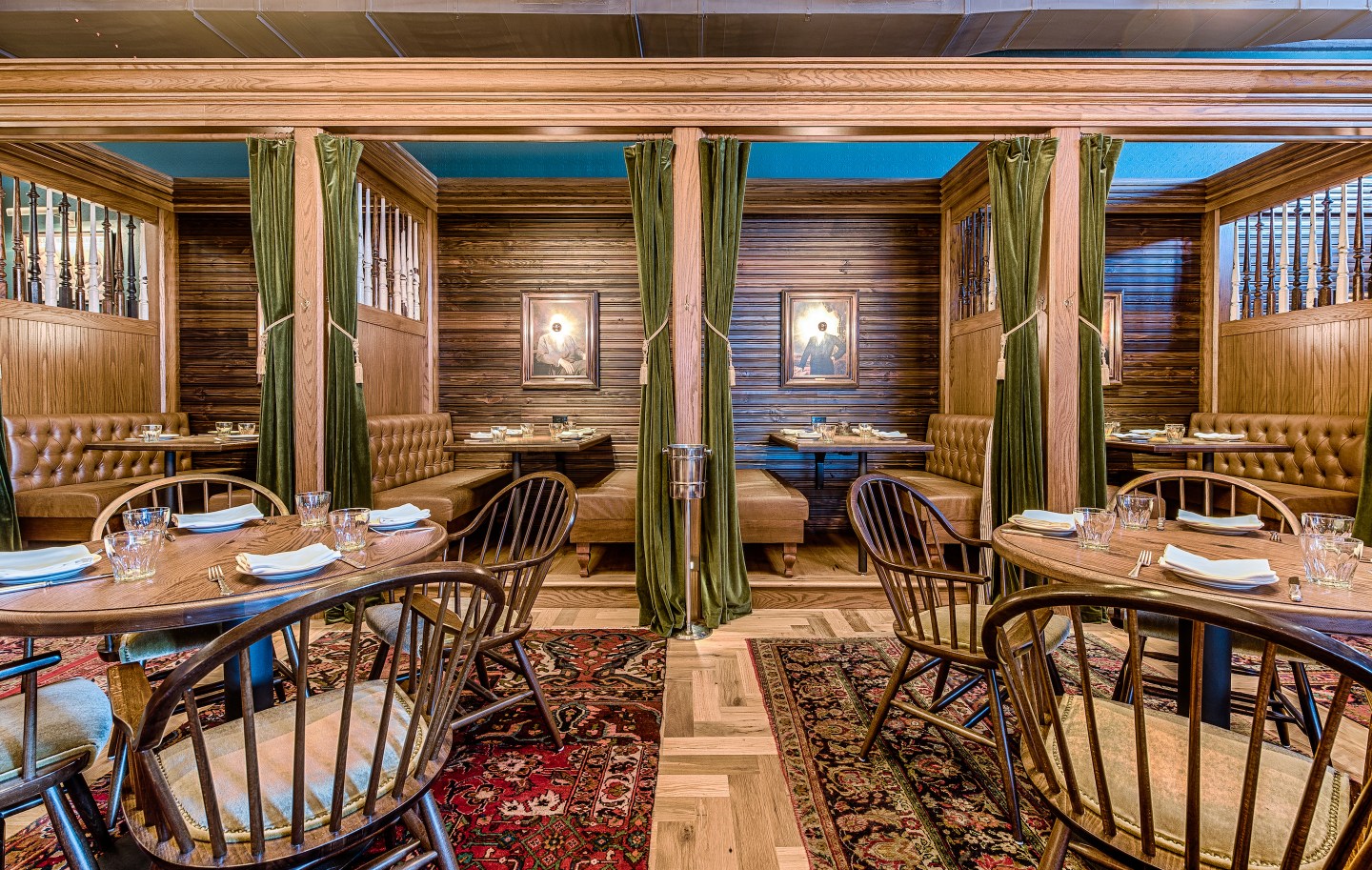 If you’ve been to a restaurant in the past year, chances are you’ve noticed some changes. Maybe you ordered from a QR code menu, sat at tables separated by plastic barriers, or dined outside midwinter, alongside towering silver heaters to help ward off the cold. While they’re all a product of the COVID-19 pandemic, many are temporary, and some may last much longer.

Lance Saunders, director of design at Philadelphia firm Stokes Architecture & Design, has envisioned hospitality spaces for 15 years. He’s spent the past year contending with the pandemic and, like most everyone else in every other industry, pivoting, innovating, and reimagining. Saunders and his team have designed and constructed dozens of “streeteries,” or street eateries, around Philadelphia and Washington, D.C. Early in the pandemic, these started out as simple spaces protected from the sun and rain. As the pandemic progressed—and supply chains readjusted—more materials became available, and the designers learned how diners were using the spaces; so they evolved. Basic structures gave way to more complex spots with heater sheds, foliage, and even chandeliers, making them more akin to dining rooms that just happened to be on the sidewalk.

“The ones we did at [Stephen Starr’s] Parc were based on Parisian cafés,” says Saunders. “I think you can still look to historic references that include these kinds of precautions for COVID, that don’t make people feel alienated by how new it is.”

A little over a year in, the Stokes staff have honed their designs and, in the process, have contributed to a reshaping of the city’s outdoor dining landscape, recalling the café culture of Paris or Montreal. These streeteries are among the new elements of restaurant design prompted by the pandemic but, according to some experts, are likely to stick around for years to come.

Restaurant design and protocols were also impacted by the 1918 influenza pandemic, and some have endured more than a century later. The use of white subway tile, porcelain, and linoleum flooring—which had been introduced in the late 19th century to signify a clean space, as Americans began to understand how germs spread and how to effectively sanitize—proliferated around that time.

But, according to restaurant historian Jan Whitaker, “a more direct and widespread effect of the epidemic was the perception of the need to cover up any food that was displayed on counters.” Nowadays, diners and retro lunch counters still, of course, cover displayed food, showcasing pies under plastic domes, or cakes spinning in glass cases.

“I think the effects of the pandemic this past year will definitely influence how we experience public spaces moving forward,” says Kristen Becker, partner at Seattle-based Mutuus Studio. The architecture firm is behind the Social Haus, a restaurant at the Green O, a luxury woodland retreat opening this June in Greenough, Mont. The project began about a year ago, meaning the pandemic informed some of the firm’s design choices.

“Everybody’s personal space has changed,” Becker says. “That diameter that we’re comfortable in, typically, in a restaurant, has just shifted. And I think that’s not going to go away anytime soon.”

The team designed the space with that larger personal bubble in mind. “The way we wanted to create intimacy was not about physical connection but more about visual connection,” she notes. A central fireplace that everyone can appreciate was one way the designers achieved that goal.

A visualization of the Social Haus, a restaurant in Greenough, Mont., designed by Mutuus Studio.
Notion Workshop

For many designers, reconsidering personal space is already changing how they’re envisioning new projects. Stokes’s Saunders predicts the firm will be designing restaurants with a slightly smaller capacity for seating, allocating each diner, say, 30 or 40 square feet of space instead of ten. Scaling with this smaller capacity in mind will help guide design choices that ultimately create a restaurant that feels warm and intimate, even if there are fewer people inside. (As opposed to the deserted feel many restaurants had while their capacities were limited by local health department guidelines.) It can also drive the restaurant’s concept.

Warren Weixler, cofounder of creative design firm Swatchroom, based in Washington, D.C., agrees. “I think the idea of packing a bar shoulder-to-shoulder and trying to sling as many drinks as possible is a thing of the past.”

Whether diners feel comfortable packing into spaces now or later, one certain part of the future of restaurant design is flexibility. After a year that’s seen unprecedented challenges, restaurant owners need to have the capacity to pivot quickly moving forward, and that will inevitably materialize in how the space looks.

“We don’t know exactly what the future will hold,” Weixler says. “We are the leaders who can try to define that, but we know that what’s most successful for a small-business owner at the moment is flexibility.” Large, heavy, bolted-down built-ins are out; modular pieces that offer options and adaptability are in. “A lot of the solutions that we’re proposing have flexibility in mind, because as this year continues to change, we want our clients’ environments to be able to change with them,” he says.

As Saunders has experienced firsthand, dining alfresco will remain popular. “Obviously, there’s going to be a premium now on outdoor spaces,” he says. Others agree that outdoor spaces will continue to be a hot commodity. “We’ve seen guests’ thresholds for when they will dine outside rise,” says Jonathan Knudsen, principal of Concrete Hospitality Group. “So we’ll capitalize on outdoor dining spaces, whether that’s sidewalks, patios, or rooftops.”

While outdoors, they’ll be transforming any viable patch of space into charming dining rooms; inside, intimate nooks will get a boost. While restaurants have always needed private dining rooms for parties and group dinners, the experts think smaller ensconced spaces will be in demand.

“That’s where designers get to be creative,” Weixler says. “It can be done with screens, booths, higher-back chairs, or private dining rooms with alcoves.” These elements can be woven into the design, so they don’t have to feel obtrusive, Saunders says. “For the booths that we designed at St. Anselm [in Washington, D.C.] we were referencing classic restaurants from the ’40s and ’50s, but they have full high walls between them already, so it’s built-in social distance.”

While restaurant dining rooms will evolve, Saunders notes that plenty of behind-the-scenes elements will change, too. “There are little invisible things that you can start to think about more—having more operable windows, better air circulation and air filtration,” he says. “Boring stuff, for sure, but stuff that I think is going to become standard in building design.”

And while many experts predict the pandemic will have at least some lasting effect on restaurant design, some say, not so fast. For Knudsen of Concrete Hospitality, projects that have been in the works for years—including two new branded hotels in New York—have had no changes from pre-pandemic designs, beyond temporary partitions. He predicts those will be gone by the end of this year. His team is even continuing to add communal tables into their restaurant designs.

“We’re social creatures,” he says. “The pandemic has proven that we need that interaction. And you can’t replace that.” If some packed bars and restaurants in places that have lifted all COVID restrictions are any indication, Knudsen may be right.

In the meantime, Stokes has been approached by restaurateurs in other cities who are interested in buying modular versions of one of the firm’s streeteries, indicating that, at the very least, this brand of café culture may stick around.

Whatever happens, the pandemic has prompted designers to rethink long-standing norms, and some, like Weixler’s Swatchroom cofounder Maggie O’Neill, think it could be for the better.

“Creating spaces that provoke joy, a sense of community, and well-being, and that can also be inclusive, are going to be cornerstones of design,” she says. “And now they are a mandate for people who are very intentional about their concepts.”